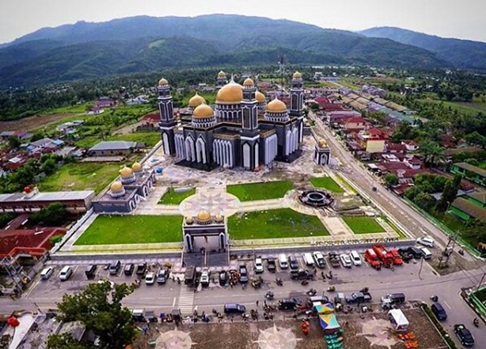 source
Kutacane is an area located in Southeast Aceh District, Aceh Province. A small town that can be reached by road for 5-6 hours from Medan or 10-12 hours from Banda Aceh. In this city stands a magnificent mosque and symbolizes the hegemony of Muslims in Southeast Aceh Regency; At Taqwa Kutacane Great Mosque.

You could say the construction of a mosque initiated by the Regent of Aceh Tenggara Ir. H. Hasanuddin B, MM and done by the sons of Aceh is the largest mosque in Southeast Aceh region. With an area of 12,230 m2 and a building area of 2,700 sqm main mosque, the mosque is able to accommodate about 4000 worshipers in the mosque and 2000 worshipers outside the mosque.

The mosque, which was just inaugurated on April 8, 2016, was built in 2009. It takes more than 6 years. Costs needed to build by 70M. Fantastic numbers! The funds come from APBD and the participation of the people of Southeast Aceh. So, do not be surprised if the design and interior details and exterior is really amazing. Includes the need for a very complex sound system.