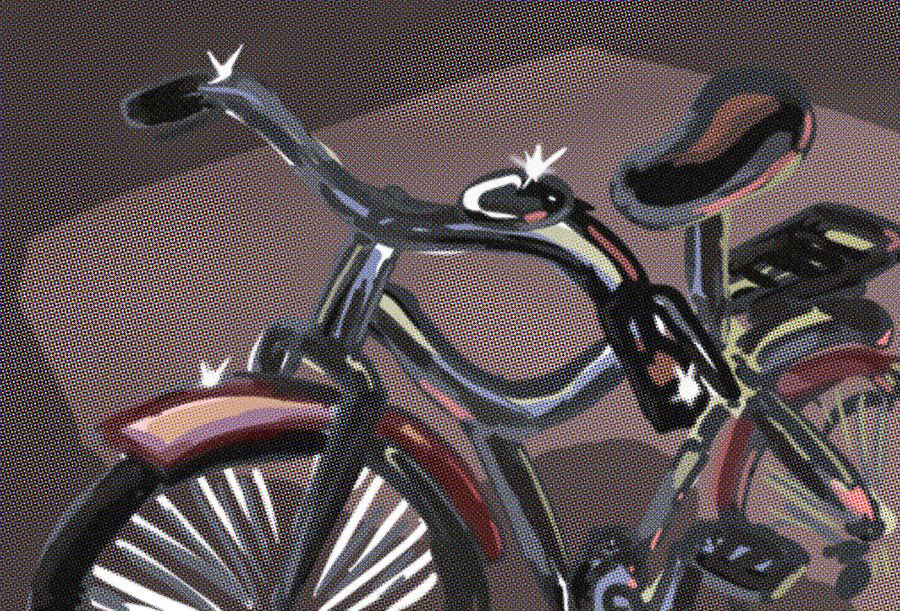 After observing the positive reception my previous short screenplay received here on Steemit, I decided to upload another one of my shorts for your perusal and enjoyment. This one I actually did shoot a few scenes back in 2014, but wasn't happy with the initial footage. Then it became difficult coordinating with everyone again and so... I get the feeling now that I had tried to rush the whole thing, and so I think I'll concentrate in writing for the time being and let the film making follow in its own due course.

A cheerful young man, LARRY, strolls amongst a line of bikes for sale. His eyes light up as he spots an old classic style bicycle, with curved handlebars, a banana seat, and shiny red fenders.

Larry steps forward to inspect the bike. He runs his hands along the handlebars. He sits on the seat and bounces, testing the springs. He lifts the bike and spins the wheel, squeezing the brakes and making the wheel stop. When he rings the bell, he finds to his delight that it makes a very unique ringing sound. Larry’s face is bright and smiling as he runs through his procedure with the bike.

Finally Larry turns to the BIKE SHOP OWNER, who is leaning on his forearms behind a counter, watching Larry with a sage expression. The Owner nods his head knowingly.

Larry is wheeling his new bike out of the shop. The owner raises his hand and points to the row of bike locks for sale on the wall, but Larry waves him off and strolls out of the store. The Owner lowers his hand and with a worried look he watches Larry leave the shop.

Larry is euphoric as he rides his bike home. He weaves through traffic wearing a grin that stretches from ear to ear. People turn at the sound of his bell and wave at Larry as he rolls past them. The sun shines brightly around him. He even deliberately rides straight into a rain puddle, lifting his feet and laughing as the water sprays up around him, forming a brilliant rainbow in the air.

Larry rolls up to the front porch of his home. He lifts the bike over his shoulder, carries it up the steps, and then sets it down on the porch. He then steps back, hands on his hips, admiring his new possession. The bike leans against the porch railing, gleaming beautifully in the waning afternoon light.

Larry turns to the front door, his keys in hand. He opens the door and sees the stairs inside, leading up to his home. The stairs seem so steep and high to him now.

Hesitantly, Larry turns back to the bicycle. He can see that it's well hidden from the street, sitting behind the latticed porch railing. He steps forward and moves his bike a little further down the porch, away from the steps. He then takes a chair and places it strategically so that the bike is practically invisible even from the steps.

Larry looks out to the street in front of his home. Everything is peaceful. The trees are still, the light is gentle, and there is a sense that no wrong will happen here tonight.

After a moments consideration, Larry nods his head and turns back to the door. He takes one last look at his bike, then steps inside and closes the door behind him.

A full moon beams down on the house. The bike sits, undisturbed, sheltered in the porch’s shadows. The street remains empty.


Larry opens the front door and looks out onto his porch.

The bicycle is gone.

Larry stands perfectly still, staring at the space where the bike had been. He then quickly walks over to the chair and looks hopefully around it, even tilts the chair to look underneath. He looks around frantically, runs down the steps and searches around his house.

Finally Larry emerges from the back of the house and trudges up the steps. He turns around, back turned on the building, looking around helplessly, then slumps down to a sitting position on the steps, his head in his hands.

Larry steps into the doorway of the BIKE SHOP. The Owner is working on a bike with a MECHANIC, a young woman with a kind face and coke bottle glasses.

The pair look up and spot Larry, slouching despondently inside the front door of the shop. Owner and Mechanic look at each other, then back to Larry.

Larry shrugs his shoulders, then smacks a palm to his forehead.

The Owner makes a pained “Ouch” expression and walks up to Larry, lays a hand on his shoulder. He indicates back to the Mechanic, who is wiping her hands with a rag and smiling gamely.

The Mechanic is showing another bike to Larry. At first Larry is sad and dejected, but as she runs through the different features (brakes, lights, bell), he begins to warm up and return to a happier mood.

Larry pays for the new bike at the counter. He hands some bills to the Owner. The Owner looks at the bills, takes half, hands the rest back to Larry. At first Larry refuses, but the owner insists, pushing the money into Larry’s hand. Larry responds gratefully, then turns to leave with his new bike.

The owner taps Larry on the shoulder. When Larry turns around, the Owner hands him a bike lock.

Larry lifts the new bike up onto his porch. He takes the lock and wraps it around the frame and fastens it to the porch. He pulls on the lock to test it, then steps back and nods his head with a determined frown. He turns and goes inside.

Larry is awakened in his bed by a familiar sound - the sound of the original bike’s bell. He sits up and looks to his open window. There is no further sound. After a moment, Larry lays back in bed.


Larry steps out his front door. The second bike is gone.

The Mechanic looks up from a bike she is working on and sees Larry standing in the door. His head is hanging down, and he looks up at her with sad and soulful eyes. She walks over to him and gently puts her arms around his shoulders.

The Owner shows Larry the only bike he has available now - it’s a piece of crap. As Larry reaches for his wallet, the Owner motions the bike to Larry and cuts his hands on front of him, indicating no charge for the bike.

Larry is wheeling his crappy bike past a shop window, and then stops to take a second look. He has spotted a package labeled “GPS TRACKER”, sitting in the window. A shadow grows over Larry’s face. He smiles to himself grimly.

Larry sits in his apartment with the bike, which he has carried up the stairs. The GPS is installed under the seat, and Larry cradles a phone in his hand. He presses a button on the phone, and a small red light turns on beneath the bike’s seat.

Larry lies down to bed. He pats the phone on the night stand next to him, then looks across the room. The bike sits inside the front door of his apartment, unmoving amidst the lengthening shadows.

With an abrupt gasp, Larry wakes up. He first looks to the night stand - his phone is still there. He then looks over to his apartment door. The door is open and the bike is gone.

Larry scrambles up from his bed and stares at the door in disbelief. He snatches up his phone and turns it on. The GPS Tracker pops up on the screen and shows a flashing red dot on a map.

Larry shakes his phone like a fist and grits his teeth with fierce determination.

Larry is driving his car through the streets, watching his phone. On the map he sees his own blue dot getting closer to the red target.

Eventually Larry’s car enters into a small industrial area of garages and narrow alleys. A sound from outside the car perks up Larry's ears. It rings out again - the sound of the original bell. He slows the car down at the head of an alley - and spots his first bike crossing the alley.

Something makes Larry blink and shake his head. He only saw it for a second, but he thought that what he had seen was...

Larry slams on the brakes and jumps out of his car. He runs into the alley in hot pursuit. As he turns a corner into another alley he sees a shadow of a bike passing along the brick wall.

In a rising panic, Larry runs forward to the next corner. The bell sound rings out again. Larry rounds the corner and sees the back wheel of the bike entering a garage door. The door immediately rolls shut after the bike enters.

Larry approaches the door. He checks his phone and sees the red dot indicator, with the phrase THREE METRES flashing beneath it.

Larry takes a deep breath and screws up his courage. He then reaches down and lifts the garage door all the way up.

Stepping cautiously forward on the balls of his feet, Larry squints his eyes and peers into the gloom. He sees all three of his bicycles - arranged in a semicircle a few feet in, turned away from the door.

As he takes another step inside Larry hears a quick scraping sound - his foot has brushed against a scrap of paper on the ground. He drops down and picks up the scrap of paper, rising slowly back up to his feet as he reads. The paper has a single sentence written on it, printed in courier typeface:

Larry looks up from the paper at the bikes. The three of them sit mutely, their backs turned to him in final rejection.

Larry raises his eyebrows, trying to reach out. The bikes do not respond.

With a slump of his shoulders, Larry sighs in resignation. He reaches up to lower the door, taking one last look at the bikes. He then lowers the door and leaves the bikes together in the descending darkness.

Both the writing and the image were created by Greg McCann, the author of this post and the owner of this Steemit Channel.
It is my sincere hope that you enjoyed reading my little screenplay. Please leave your comments below; I always appreciate reading them. And if you would like to read some more of my work, then I'd like to draw your attention to a recent story of mine titled Morning Run, a slightly longer prose work, that I've recently uploaded and would love for you to check out. Thank you for your time.

Cycling Comunity on Steemit sends you some good wind!!

Keep those weels rolling and enjoy the ride!!