Why people are leaving Steemit?

Today I was scrolling my facebook feed and saw interesting topic in Steemit group : 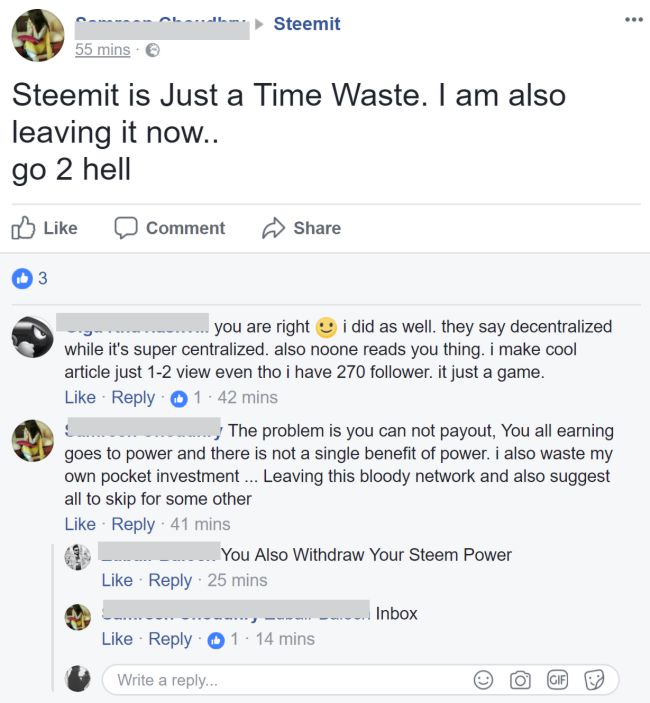 So, what's the point here? People are leaving Steemit, because no one reads them. But don't you think that this might be the lack of knowledge how to improve your writing and marketing skills?
And they're saying that they create their own unique content, but still no one reads it.

I think that If you're believing in yourself and the content you're creating, when you will succeed.
Just not so fast as you think. I might not happen within a month or two.
Same thing will happen on any other platform or in real life.

You won't be a good dancer if you're started taking dancing lessons just few months ago.

Tell me your opinion about it, I want to know. Maybe these guys are right? What do you think?
Have you ever considered to leave Steemit?

By the way, a person who wrote facebook post about leaving Steemit is www.steemit.com/@mrchips
So, I don't know encourage her to not leave Steemit.

I have always told people... "You post on Facebook and all those other social media sites and do not expect to get paid. You should have the same motivation on SteemIt. Start posting articles that you enjoy writing about, and if you make money b/c of it then it's a win/win."

Part of the problem is that Steemit UX is geared towards making money. The first thing users see is "Get paid to post" and the value of an article front-and-center immediately flips a switch in people's brains. What this does is attract get-rich-quick schemers, algorithm-gamers and at the same time puts off creatives and already popular content creators, it immediately triggers the "scam" flag in their brain.

Steemit Inc should instead put time into creating a superior user experience, curation and recruitment of popular content creators.

I feel that your comment needs to be seen by creators of Steemit. How could we do it? We need to help to improve this platform.

I'm not sure they care very much.

Very good point. I know ideas along those lines have been brought forth to SteemInc with no prevail too. Its unfortunate the lack of development.

Good point. It should be obvious to everyone, but surprisingly it's not.

I guess it's because of the times we are living.

Everything is moving faster and faster, therefore, you want to do and have everything at high speed.

We need to excel in our fields of interest, create relevant content and have a lot of patience. But if you use Steemit just for the purpose of earning fast money with little to no content, then Steemit is the wrong place to be.

That is absolutely right, my dear. I love your words : "you want to do and have everything at high speed."
Maybe this is our problem. We need to slow down a bit, take a look around and ask some questions to ourselves.

@narovski good blogs and all people will get their answer in it. Some will work more and some will leave...
Its only Luck

So you don't believe in hard work talking about Steemit?

@narovski thanks for this post, it really encourages me to keep on building my blog. I just started but I read from another blogger that he's is sometimes very frustrated as people just don't upvote his posts - though some others with less content get upvoted.

Don't you think sometimes it's really about who you know and who featured you? It's just a question because I'm too fresh to have any insights.

But I will continue to write about my travels, my volunteer work in Africa, my life and I hope people will like to read about a real person :)

Yes. Other people are writing blogs for years without getting paid and it's not an issue for them. They just love doing it. Talking about Steemit, yes, I think sometimes it is might be about who you are and who featured you. Obviously it's easier if you have huge fan base on other social media platforms. But I think all people who are just starting writing on Steemit, include myself needs to forget about money a bit and focus on writing their content and grow community arount them. I'm here for 18 days and I learned that it's not just about writing, it's also about finding similar people and engaging with them not because of money but because you honestly like their content. Btw, I will read your blog, I hope I will like it. :)

People are leaving Steemit because they are not patient enough, it's only a matter of time before the platform explodes and the price of stem will bloom to heights never seen before... Keep Steeming

That's the point of view that I admire!

Let me check with @originalworks

The @OriginalWorks bot has determined this post by @narovski to be original material and upvoted it!

I wrote a post about 6 mindset every steemian should have and I think those kind of mindsets are what all steemian needs. The 1st mindset is never expect big bucks when you are still a minnow. How can you expect to earn and be noticed quickly when you only wrote few posts? And how can you expect others to view or comment to your post when you are not even doing it yourself? Don't expect just because you upvoted, commented, resteem, and follow others they will do the same. All of us have unique preferences. You may be able to catch their attention if you leave genuine and valuable comment on their post. When you are so desperate for upvotes surely people will run away from you.

Let us go back to the 1st mindset I'm talking about. Never expect big bucks when you are still a minnow/a newbie. This applies to anything that you do online. How can you expect to earn more when you don't even invest some time understanding the platform and how it really works?

When you are a blogger at wordpress or similar platform you will never have any readers no matter how good you are if you do not know how to drive traffic to your site. You need to work hard for AT LEAST 6 months before earning a few cents to some dollars. Others even takes a year or so.

If you know who your audience are and you are putting your heart and soul in your writings, and you know how to build strong connections to other people, in no time people will start to notice you, follow you, and read every post you make. People appreciates a content when they can feel and see that the person writing this article puts all her love and passion on every article that she had written.

Proper mindsets will help you succeed. Whining is the main ingredient to failure.

I guesss at the end of the day, our job is not to convince them. I beleive steemit will naturally grow as it benefit bloggers who is creative in building followers and content.

BTW, I Resteemd your post, and here is why :

Never thought about it. You proved your point. Thank you for resteeming by the way! My name is Daniel too :)

I've been here only a few days and seem to be building my blog. I would make content whether I was on steemit or not. Everything takes time, if you don't enjoy what you are doing you won't succeed. If don't know how to open up and give yourself to the community you will have problems. It can't be all about money. That will come as you grow.

This is exactly my point. It's good to hear same thoughts. :)

I agree, sometimes people don't commit to a comment nor upvote, perhaps you need to watch what others are doing to become successful on this platform.

Negative people will leave, and put comments everywhere @narovski it is how you approach and direct your posts as to how much success you will have. Positive attitude is required and persistence with anything online.

That's why your name is 'cleverguy' I guess ;D

Nice article. Well put. I have this person in my Steemit group too. There is a clear lack of understanding here.

People need more determination. I hope those guys are not leaving coz we need to build this platform together

You can use this Churchill thought to every life situation. That's why I like it. And you're right, of course.

Maybe there are other reasons too..

Hm, actually that's what I'm thinking too. But as I saw she is still posting. So she is staying.

it is a game of marathon rather a sprint run. be patience and be engaging, I think that will get you to the top, but definitely in a slow pace.

I read this and I'm staying. Also upvoted and following you:)

Well, Steemit is not a get rich quick scheme. It takes hard work if you want people to view and upvote your posts