A Shot of Intellect - The Milgrim Experiments on Obedience -

A psychologist, Stanley Milgrim, from Yale University is credited for performing a set of frightening experiments on obedience in the 1960s. These experiments established how situations can dominate an individual’s conscience.

The results of these studies have often been used to account for some of the most horrific acts in history like the My Lai massacre, the Rwandan genocide, and the Holocaust.

Credit:
The subjects in the experiment were drawn from a vast diverse background and different walks of life. They all accepted a compensation of $4.50 per hour to take part in the experiment on learning and punishment.

The subjects were instructed by a doctor, dressed in a white coat, to serve as “teachers” by reading a data list of associations to a “learner,” who in the case study was out of view but could listen in a room nearby. If an incorrect answer was given by the learner, then the teacher was commanded to give the learner an electric shock: the voltage increased after every wrong response. The electric shock values were labeled from “slight shock-15 volts” to “danger: severe shock-450 volts.” 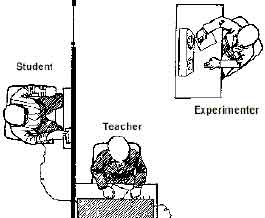 Credit:
The actual experiment was on the subjects, the teachers, to help understand what level of punishment they would direct. The learner, an actor, would cry out that they couldn’t handle the pain at 180 volts. By 300 volts, the learner would refuse to participate and by 330 volts the learner would remain silent. Much to the dismay of Milgrim, 65 percent of the teachers continued to pushish the learner at 450 volts: even if they were made aware that the learner had a heart condition.

The majority of teachers showed signs of being stressed and disturbed, often sweating profusely and biting their lips. Yet, with the persuasion of the white-coated authoritarian experimenter, they sustained and continued in spite of their moral qualms. Credit:
The results astonished and appalled the academic community for using ethically questionable methods and for the frightening results. The research illustrated how ordinary people could be induced to perform inhuman acts simply by the presence of authority. The studies showed similar results of obedience from both women and men.

The study also concluded that the more psychological distance the subject had from the victim, the higher probability they had to follow orders till the end. If the teacher read only the list of questions, but didn’t administer the shocks, 90 percent would complete the experiment. If the teacher had to touch the learner in order to administer the shocks, only 30 percent would reach to the end with 450 volts.

The Milgrim experiments have been duplicated throughout various countries and have all achieved similar results.

Curated for #informationwar (by @wakeupnd)
Relevance: Knowledge is power.