Bitcoin reached ATH (all time high) this week. The total crypto market cap is also at ATH of over $120 Billion this week. Ether had made a strong recovery and looks to be heading higher. Many alts are also recovering. Steem is trading at $1.32, which is half of it's ATH. It reached a high of $2.72 on June 9th...that was just 2 months ago!

When will Steem recover?

Steem is still in a consolidation phase. We can look back and see that this is one of many we have experienced so far. The big questions are where is the bottom and how long before we start the recovery? 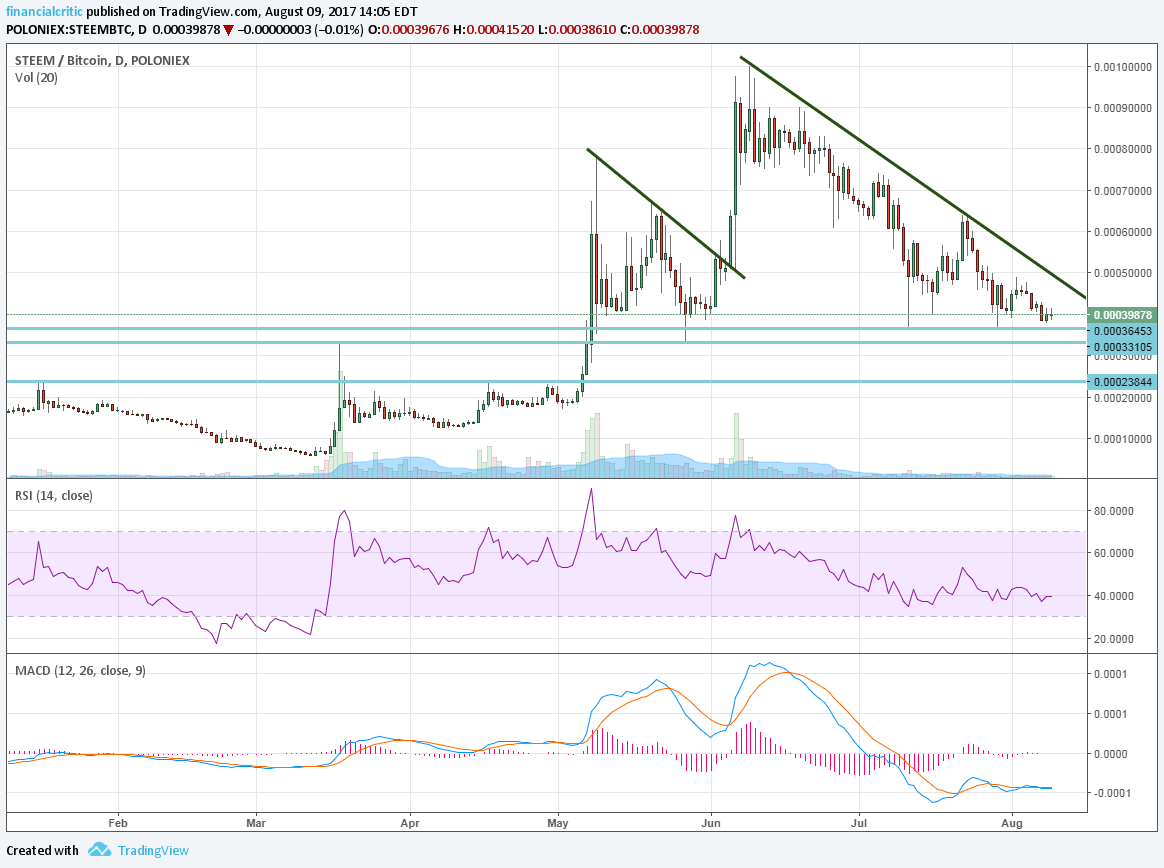 The RSI on the daily chart has gotten down to the 35 to 40 range, volume has decreased significantly...both are signs that we are in a healthy pull back. Have we reached a low enough volume and RSI that will spur a recovery or do we have more to drop?

If you compare Steem/BTC to other alts/BTC, we can see the timing of highs and lows isn't always in sync with each other. 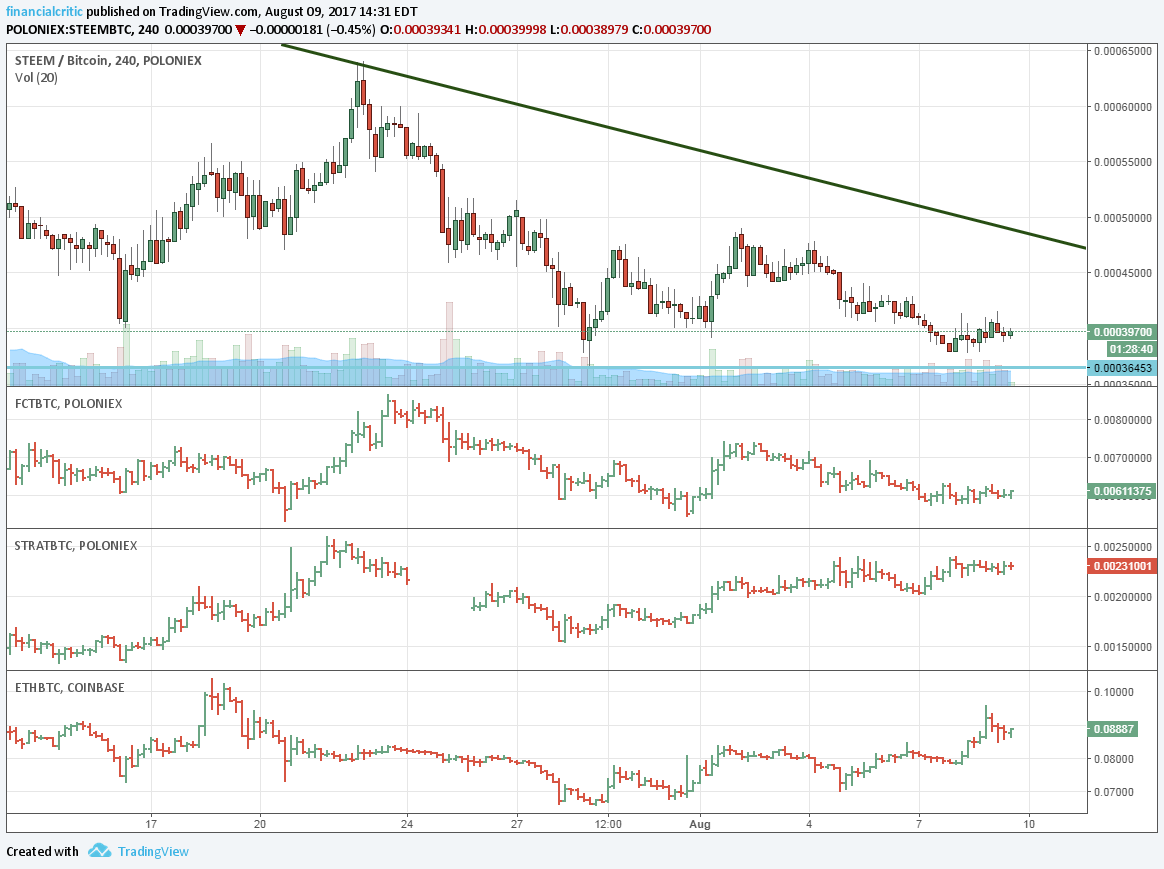 The most recent lower high on the 4 hour for Steem was on July 22nd, Factom was on July 23rd, Stratis on July 21st, and Ether on July 18th. Even as Ether looks like it's recovering in USD, it still hasn't reached the high from July 18th. Ether and Stratis look like they may have started to recover by making higher highs and lower lows since their low in late July. Steem and Factom still haven't made higher highs, but they are making higher lows as well...which signifies that we are due for a move with Factom and Steem. It doesn't necessarily mean the move will be up, but given how these alts do generally move together, the odds may be in the favor of Steem going up.

How big will the bounce be?

If Steem were to go on a bull run after a period of consolidation, like it has in the past, we could see a new ATH of 10-20% higher than previous ATH. If that's the case we could see 110k or 120k Satoshi Steem. Assuming Bitcoin hovers around $3300, that's a Steem price of $4!

We have seen a sharp bull run after 1-2 months in the past with Steem. We are approaching 2 months since ATH, so it is possible. Whenever we do see the big bounce, one thing is for sure...it will be quick!

Yikes. Hopefully that doesn't do too much though because daily volume is over 1.5M

Most Alts seemed to benefit from the increase in BTC as the fork went off without incident! Most Alts except for Steem that is. I don't know why this is but it may mean that Steem has a lot of upside potential.

Might just be a delayed reaction. Many alts haven't taken off yet.

I heard that some whales are powering down heavily. I haven't double checked that though. If that is the case, then this trend might continue since it takes so many weeks before this process stops. Is that how it works? Maybe we are lucky and some new whales pop up. Let us write Elon Musk an open letter. ;)

Looks like 7 of the top 25 are powering down! Sorry but I don't have time for amore detailed analysis. Hopefully they need funds for other projects and don't see this as a sinking ship!

Interesting, wonder if new users can overcome that.

They already do I guess, otherwise the price would probably go down more.

Steem seems to be going the opposite direction.
BitCoin and Gold are up because of the war rumors, Steem went the other way.

Steem broke through the 36.5k support...next level down is 33k. A few new alts hitting all time highs today...not much attention on Steem.

the odds may be in the favor of Steem going up.

May the odds be ever in our favor.

As you mentioned, we have hit the 36.5k level twice now, I think we see Steem break through and starting pushing towards ATH.

Nice analysis and comparison between Steem, Factom, and Ether - never noticed that.

Those just happened to be the ones I track regularly....no other reason besides that.

So this is what people do in finance? Look at charts and draw lines with a ruler? I have seen that many times now since I joined Steemit. I find that rather peculiar that things move like that but I guess there seems to be some kind of science behind it. Thanks for sharing this. Do I believe it will hit $4? No clue, I don't understand enough of these things. I try to focus on my work on Steemit and hope it doesn't fall too much anymore. Everything else is a bonus. :)

Could you explain the relationship of Steem and Satoshis? Why is this calculated in Satoshis and not in BitCoin or Dollar?

One Satoshi is 0.00000001 Bitcoin. The reason I'm talking in Satoshis is because Steem is most commonly traded against bitcoin so the charts of Steem vs Bitcoin are the ones most closely watched by people trading.

Cool, thx for explaining that.

Solid technical analysis. I would love to see a redraw of your top chart usind Steem / USD instead of Steem / BTC. Those neat and clean areas of support/resistance will, I suspect, completely disappear once you account for the increasing value of BTC. The result would be that Steem's recent consolidation is actually notably higher, in USD, than the previous May-June one.

I would love to, just haven't found a reliable chart site that shows Steem against USD. Coinmarketcap has a Steem/USD chart but it's kind of rough looking.

Yeah, that's the only chart I know of too. =/ You can't get it at Kraken or Bittrex.

Thank you for this article. This is news I think about a lot and wanting to hear :)

As a relative newbie to steemit, but long time crypto observer, I have a couple of thoughts. I think the timing comparison of alts to btc is a product of external factors. Mostly "buzz." Having watched the recent decline in Steemit since I arrived, it appears to be recovering slightly. Isn't Steemit tied to the dollar, though? If so, is that affecting the rebound potentially? If not, then I would say that Steemit should be at the front end of a climb. Just by the nature of crypto. After the fork, everything appears to have shaken out. And other alts are climbing.

The reason I didn't compare it to USD on the charts is because you can't trade it directly to USD. Yeah, exactly...I'm hoping Steem will climb along with everything else.

I think it's very possible. We will definitely see a $5 in the next year... mark my words :)

you heard it on the blockchain!

As I usually say, if you are invested in a coin with a good project and a good community behind it, you have a ticket to the moon. Steem is one of this coins, and I don't know if it will hit 4$ in the next two months, or in the next four months but I definitely see this coin going up and up in the future.

Agreed...I am hopeful Steem and other alts take off like they have before.

So what you think about sbd it will rise or not at all ?

I wouldn't be investing in it....it has been on a constant decline and hasn't had any major spikes that show a higher high like Steem. And volume has increased even with a decreasing price. Bad news for SBD.

Good pots indeed, upped. @financialcritic I think that it depends if the fundamentals of steem is great for a price increase. Steem will surely recover as it is highly undervalued however we will start seeing big recovery (I suggest) by the end of this year and nothing will hold it back especially if the user base here at steemit rise drastically. As steemit is growing, so will steem value and nothing will hold it back, however management hs to finish its job first. Time to buy more steem and power up before its too late.

I just read through this post again in-good one.Your points are great, however see my last 2 posts where I outlined scam and excessive supply being an issue,feel free to see it and send your suggestions on what to do. More success Excellent post, you have my vote, when you can go through my post to know your opinion, greetings

good work bro...
follow ,comment and upvote me also so that i can do the same for you

$4 seems so far away but i'm sure we'll get there sometime in the next year or so. More active users means higher steem price :)