Today, I want to share with you my artistic visit to the exhibition "Andy Warhol, Mechanical Art". 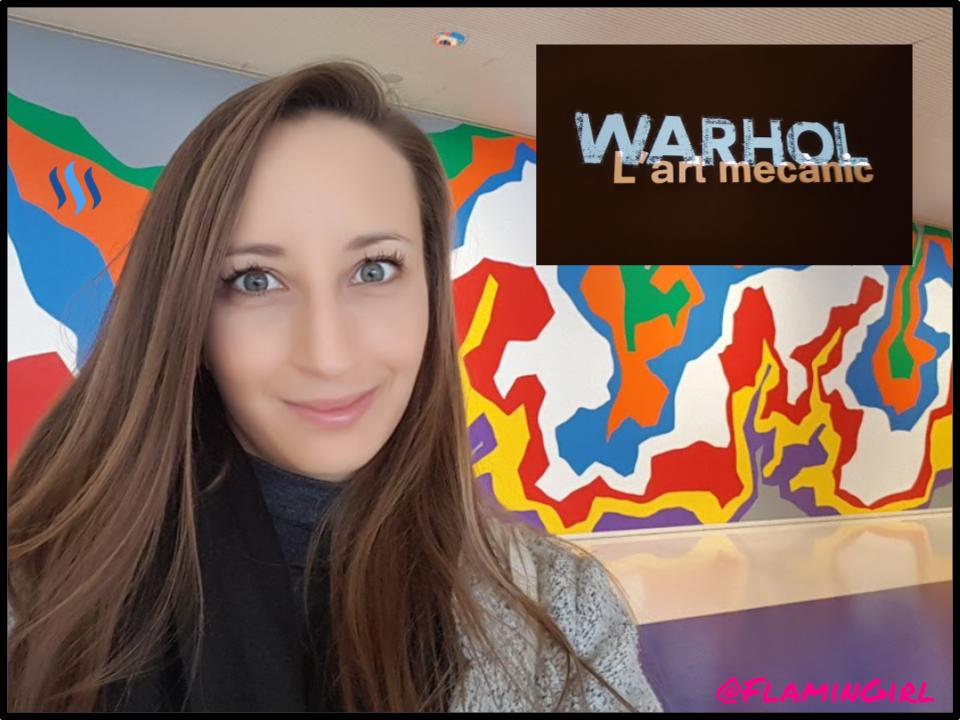 Andy Warhol as an artist was superficial, mechanical, obvious... and as universal as a yawn. Andy Warhol is a magnificent example of a contemporary creator, an outstanding student of Salvador Dalí, and a master of geniuses like Steve Jobs.
source This exhibition took place at CaixaForum in Barcelona from 14 September to 31 December 2017. 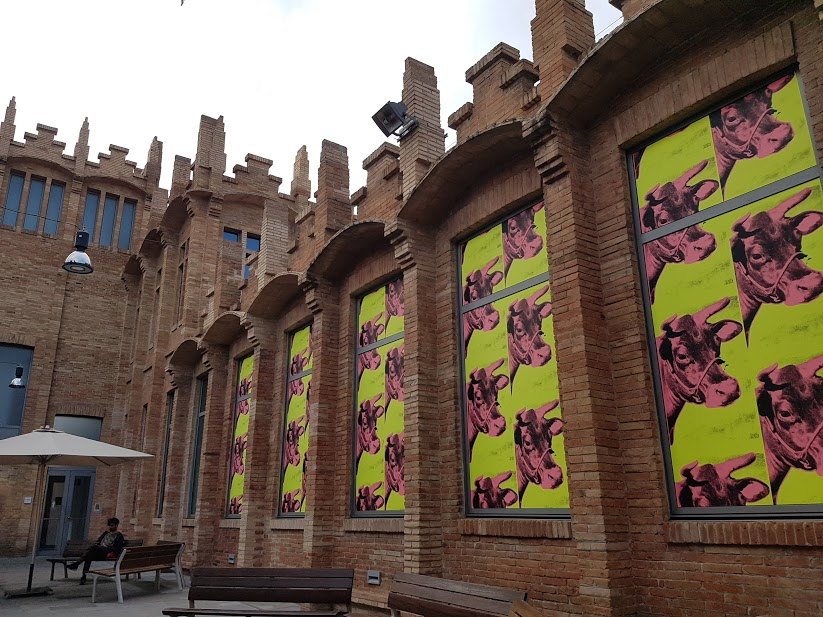 The display contains a total of 352 pieces, among them paintings, sculptures, drawings, screen prints, installations, artist’s books, films, album covers, posters, magazines objects and photographic material.
All of which belong to museums around the world (Andy Warhol Museum in Pittsburgh, MoMA, Pompidou in Paris and the London Tate Museum). Synopsis:
Born on August 6, 1928, in Pittsburgh, Pennsylvania, Andy Warhol was a successful magazine and ad illustrator who became a leading artist of the 1960s Pop art movements. He ventured into a wide variety of art forms, including performance art, filmmaking, video installations and writing, and controversially blurred the lines between fine art and mainstream aesthetics. Warhol died on February 22, 1987, in New York City.
source

From my point of view, Warhol is a "crazy genius artist" like Dalí who was his source of inspiration and his mentor.
Through this work, he speaks of the consumer society as a paradigm. He shows us his vision of things and to make his own analysis. In the same way, As you can see in these photos, Warhol uses various strong symbols of the American society, like the US dollar or like media stars (Marilyn Monroe, Jackie Kennedy and Liz Taylor). 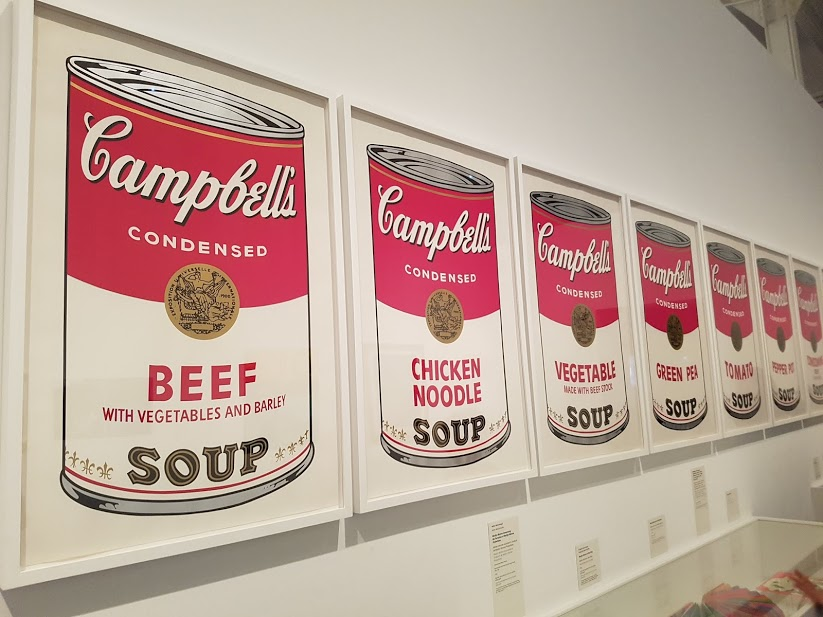 His famous "Campbell’s Soup Can". 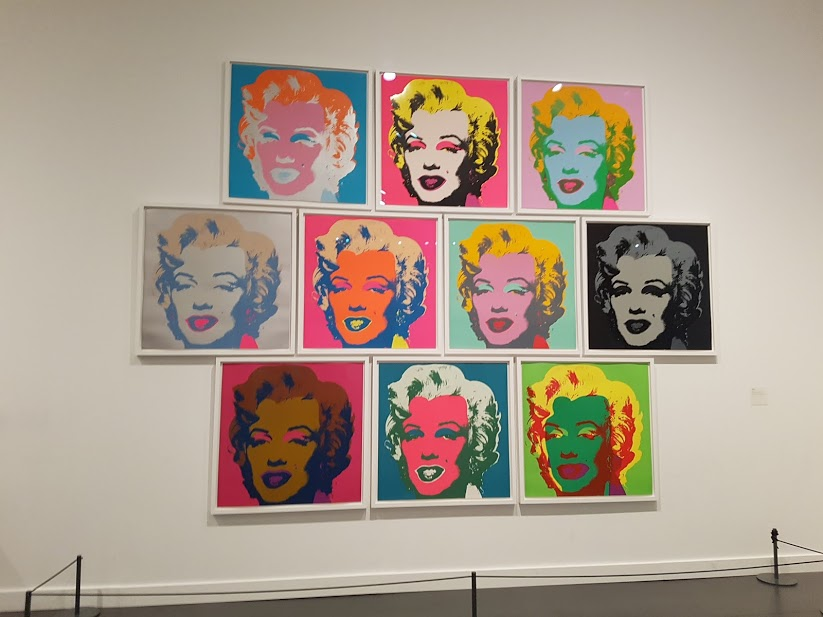 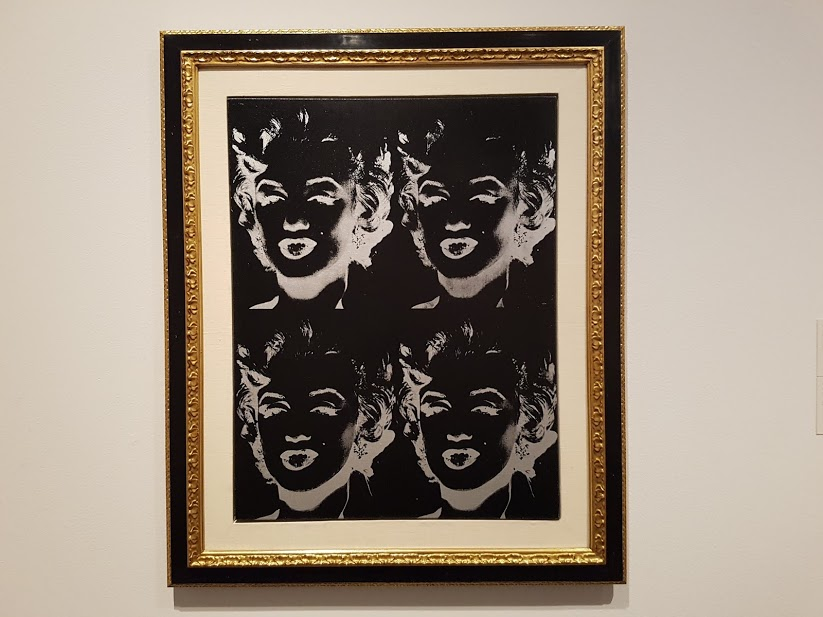 His famous portraits of Marilyn Monroe! 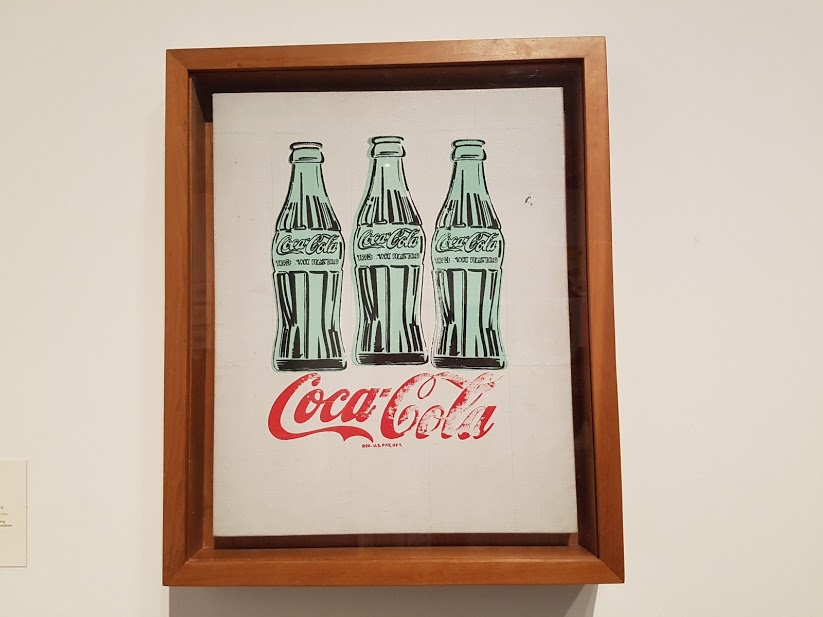 "Three Coke bottles" 1962.
Cola-Cola it's an American symbol and present around the world. Warhol distorted the image of the Chinese leader, Mao Zedong. This work of art was the biggest of all the exhibition!

Warhol worked on the themes rather around violence, food, desire, recognition, death. No romance or heroism. 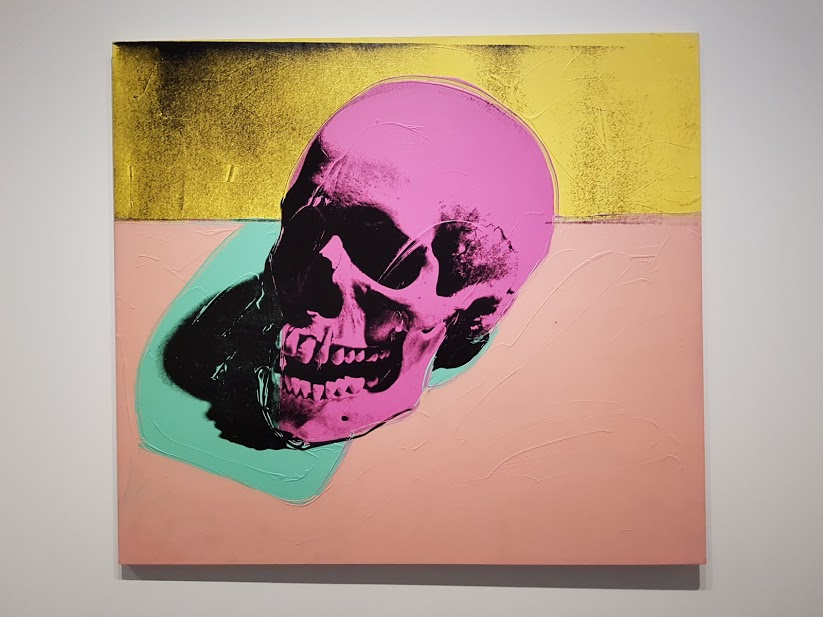 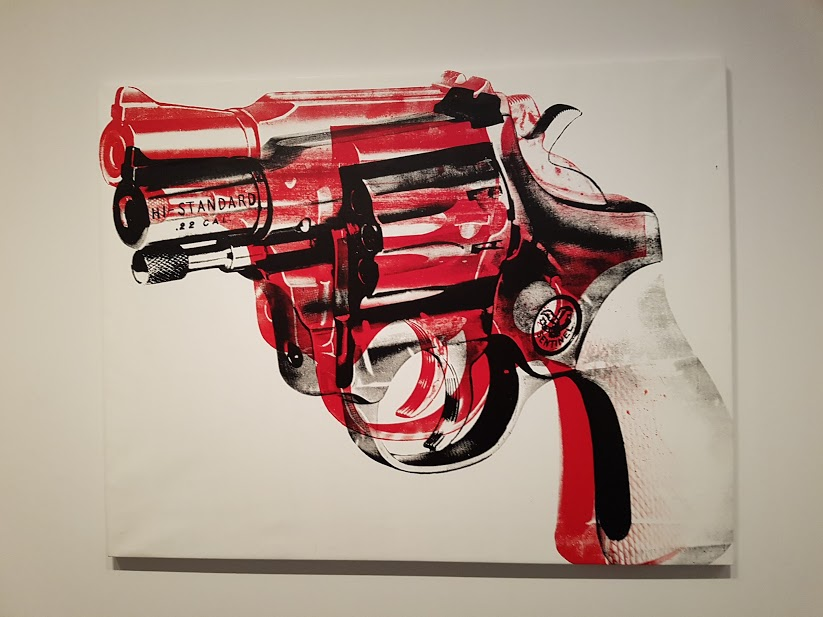 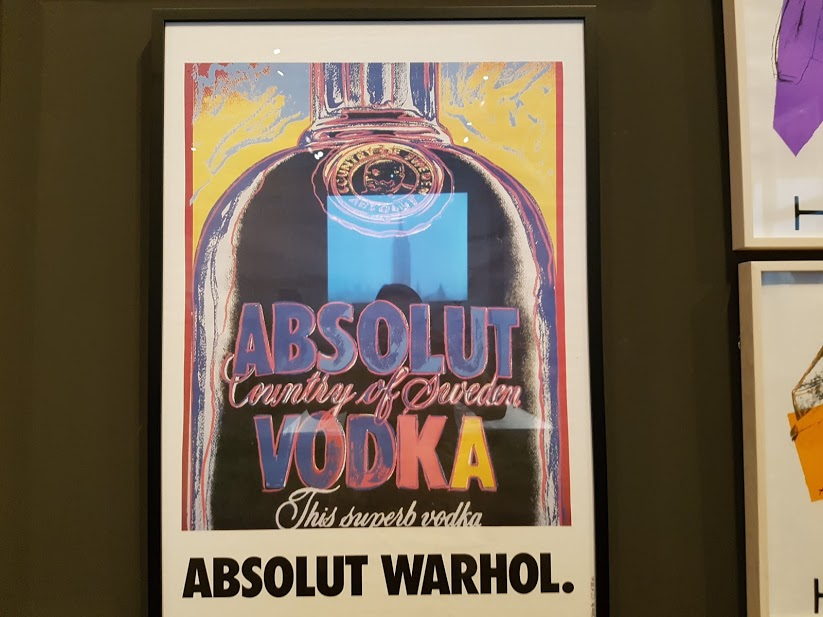 "If there is ever a problem, I film it and it is no longer a problem. It's a film".

If this interests you, here is the video version of the exhibition, which lasts 3:48 min.

I discovered Andy Warhol's works by visiting the Pompidou Museum in Paris and the MoMA in New York! These are two museums that I recommend because they are awesome! This gives me a lot of ideas for future posts ;). I hope you enjoyed this new visit. If you want to see my other posts in the same spirit, just click on the links:

If you liked reading this post, do not hesitate to vote, comment and reestem, it's always nice! 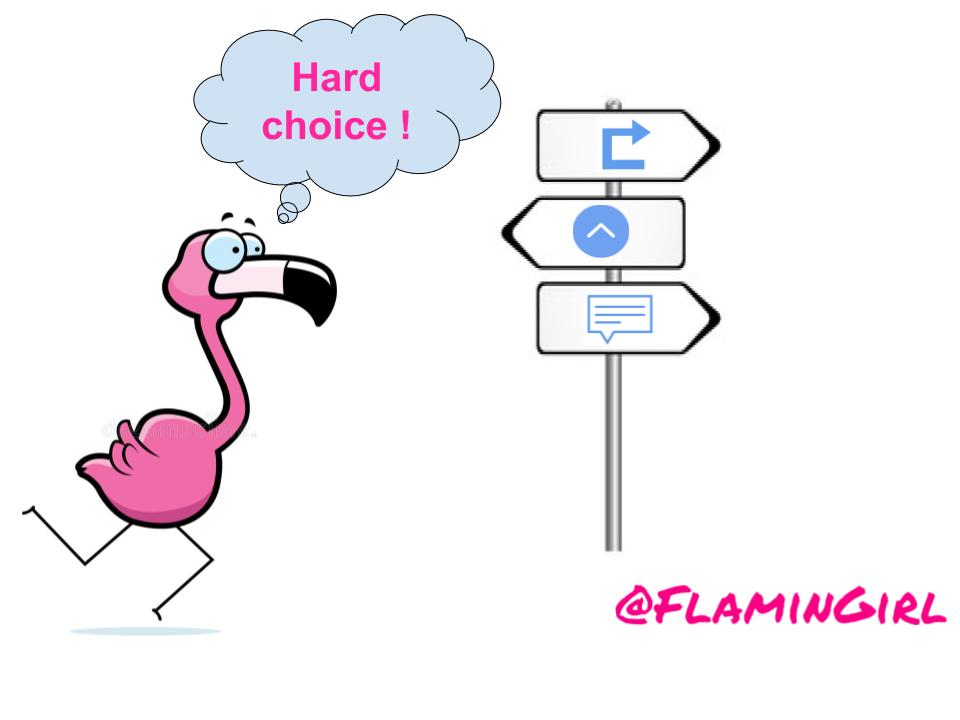 Thank you very much for your support my sweet followers! Wow some real interesting stuff there!!

Thanks a lot @joxus =D

Looks like there’s some great art pieces on Display. Thanks for sharing this incredible work! Looks like a blast!

The stuff of your staff is superb, you are a excellent blogger.
@flamingirl i am your follower please follow me

Thanks a lot for your nice @dipeshvisave ! =D

Hello @flamingirl. I looked at your blog and saw it was created relatively recently, in September last year. You became known among the members so quickly. I'm just beginning, I did a post yesterday for which I worked for a few days, but went unnoticed by others. What would be your suggestion to attract more followers? Any answer that can help me is appreciated. Thank you. With friendship, Krystine.

Here are some tips if you want to boost your blogs on Steemit:
https://steemit.com/steemit/@flamingirl/do-you-want-to-be-more-productive-on-steemit-5-flamingirl-s-tips-to-improve-your-blog-writing-skills

I am working on a new post whose theme is:
5 tips to increase your creativity on Steemit.

Stay connected, I think it can help ;)

Wow very lucky. I hope can like you and visit that place

It's currently over but you have museums all over the world where you can see works by this artist;)

IS VERY BEAUTIFUL YOUR PICTURE. LIKE TO GO THERE....LOL

No doubt he was a great artist who captured works of art of the simplest things, besides great characters especially Michael Jackson

Oh! you are so lucky! :D i didn't check it and went to visit the exhibition last Sunday, haha!

I am not lucky but just organized ;) haha!

Thanks for posting lovely👍

Thanks a lot for commenting my friend!

Thank you sooooooooooo much !!!! =D

I missed that when I was in Barcelona! need to check it next time. thanks for sharing!

Thank you for taking me to the exhibit! :) I did not know that Andy Warhol made those artworks like Marilyn Monroe's face in different colors and the Campbell label which I only usually saw it on magazines and shirts until now that I browsed and read your article. Thank you for sharing too.
Have a good one! Cheers

Hi there is an artist called Temper that I think you would really love. His work his exceptional

Thanks for sharing with your experience @flamigirl and you've done very professional job I just want to congratulation you. I look forward your next great and great professional posts good luck

Thank you very much, to be honest, I loved doing this post ;).
Thanks for your support my friend!

Very nice to see your art gallery experience share with us.Help us to gain experience in different places and from different persons.Thanks @flamingirl

Thank you for sharing mind blowing work. It would appear that there's some extraordinary ART pieces.

Saw a very similar expo about Warhol and pop-art in Metz Pompidou Centre in 2015 :)

That is the best post in Steemit... Now I vote for you...nice? Voteback😋

they were the people who made history, and now the ones who are painting them growing like them, its nice

Spain is beautiful and nice art works , i love , paintings too , i have one in my house that i stare at like everyday..it basically means getting a degree is does not guarantee your success 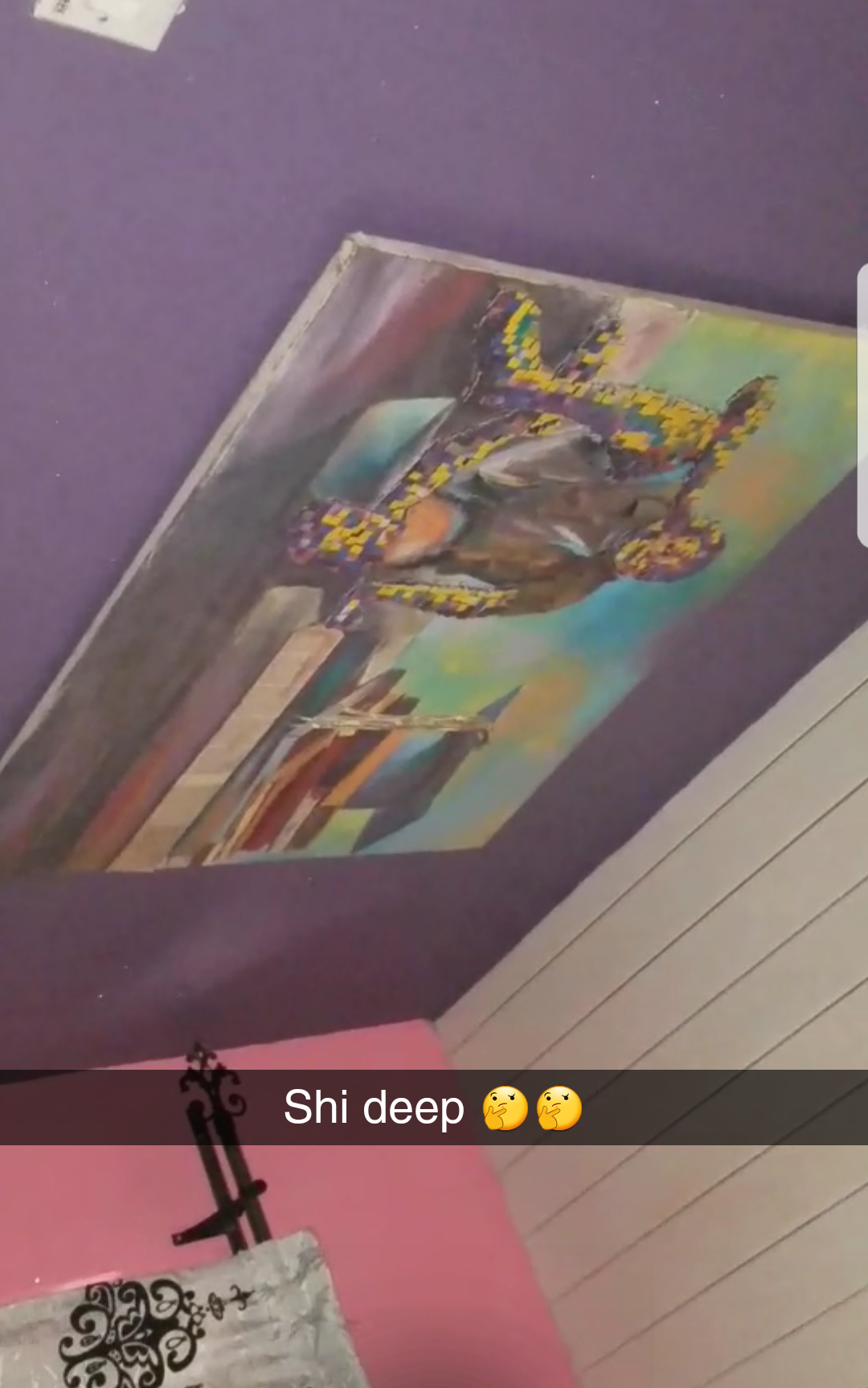 You are creative. But good photo for all @flamingirl

yes this post truly deserves my upvote
hats off for this creative work
keep it up :)

simply love it and love Barcelona!!!!

Andy Warhol is definitely one of a kind, whenever I'm travelling and have the chance to see some exhibition about him I usually take the chance.

Overall must say the quality of the post is quite good, enjoyed the combination of photos and narrative, also have to give you +1 for your name haha, like it. 🤟🏼

Otherwise, if you're into travelling, vlogs, fitness, self-development etc feel free to check out my channel, in any case keep up the good work and I'll see you around! :)

Yes, Andy Warhol is really unique, like all of us but with a little more madness maybe? = D

Thank you for your nice comment! I try to do my best. As a non-English speaking person, I work hard to improve my post day after day.

I follow you and I will look what you write;)

Hi! I'm new here. Really need help. Please vote My articles. I vote for yours. They are very good. Thank You!

Wow, this is actually one of his better displays congrats!

That is for sure a wonderful and interesting post. Thank you for sharing your experience with us;)

this is one of the places i want to go on my bucket list, one of my favourite artists his work always seems to stand out anywhere true legend

Lovely post.......you dont always disappoint me with your amazing post. Nice one dear

"If there is ever a problem, I film it and it is no longer a problem. It's a film".

Simply amazing arts by warhol... now I know who created those famous brand logos. heeh... Thank you for sharing! ^__^

Thanks for sharing this! Such a nice and thorough breakdown of the exhibition and Warhol's ideas, for those of us who are too far away to visit Barcelona.

Amazing post. Loved it. He's and inspiration for so many people. A true artist.

This was an excellent review of the exhibit! I would have loved to see that in person as I have always enjoyed his work. Thanks for the detailed review and great images! :) Following, upvoted and resteemed !

Incredible post, one of the best artists in the world, at one point I felt inside the facilities watching the works, I would love someday to go to that museum.
He managed to break the barriers between art and mass culture.
Warhol was an innovator that transformed into a mere business whose only merit was to be a celebrity and make money.
I invite you to see my artistic work; I'm new to the Steemit community. I would appreciate the support.

thanks for sharing! once upon a time I was living in Barcelona! I like your "# visit with me" posts!! keep send us Barcelona's vibes!!

Amazing art pieces and nice shots. Thanks for sharing the photos.