Third World Problems - I Have No Internet! I feel like the loneliest man in the world; for the past eight days now I have felt like a man standing on a cold sidewalk, looking into a department store window, as the world shops without me.

Less than ten years ago, I would not have considered not having any internet in my home any great inconvenience.

Back then I would simply have gone to an internet cafe by day, and would have had very little reason to go on line at night.

Now however, it is a very different story; as well as Steemit, I have dozens of reasons to be online at any given point of the day.

From researching to shopping, I need to have access to the world wide web of information that we have so painstakingly stitched together for the use of all.

I realise that in some ways I am being overly dramatic. I was lucky enough to be born into a relatively peaceful Western society, within a period in which we have synthesised 85% of the medicines that have been produced in human history.

I own various things which afford me a comfortable lifestyle, and I live in a pretty nice neighbourhood.

But dang it! I NEED THE INTERNET!

Everything is suffering, my work has taken a downturn, my productivity is at a 5 year low, and I have hardly engaged on my beloved Steemit.

The worst thing about this predicament, is British Telecom who provide me my service, at no small expense, do not know what the hell is going on.

All to no avail!!

Tomorrow an engineer is coming again; I have told them in advance that he needs to do something new. There is no point coming and doing the same five tests that the last guy did, because they will all come back the same . . .

According to these tests:

THERE IS NOTHING WRONG WITH THE INTERNET!

However due to the fact that I can't connect to the damn thing, I beg to differ.

OK, want to get really freaked out now?

When I turn on my computer, and go to Google Chrome (no other browser)

Yup, I can connect to Google and do a search, and get search results that

I can go to Youtube and get this; WATCH VIDEOS!

Seriously, if the engineer hadn't come and seen it for himself, and stated the fact that indeed I was connected to my hub, I wouldn't have believed it myself.

I mean, maybe there is a god, and he is punishing my non-belief in him by teasing me with quite useless snippets of the web.

Although this isn't great PR from the big man, this is precisely the behaviour that puts me off, that and the sycophantic, slavish, worship that he seems to crave.

Ah well, I won't quite retreat to mysticism yet; it is not my want to fill gaps in my knowledge with magic and superstition. But seriously though . .

OK, I have to finish now; I'm in a library, and I have to go home. I won't be able to go online till tomorrow, I've lost faith in this being resolved.

The amount of times I've heard the words:

"Everything is showing up fine on my screen" is a testimony to that fact.

So whilst I exaggerate saying I feel like I'm in the third world, it is only slightly. I'm fairly sure that people in North Korea are getting a better internet service than me at the mo.

Sure they have to endure a crazy, despotic, maniac, as a leader, but at least they can click on (previously allowed) Google searches!

HAS ANY ONE OF YOU EVER HEARD OF SUCH A BIZARRE SITUATION WHEREBY YOU ARE DISCONNECTED FROM THE NET, BUT STILL ABLE TO GET JUST ONE WORKING SITE? AS EVER, LET ME KNOW BELOW!

I suggest doing the tests by yourself and find out what's wrong.
from what I've read it's most likely a software problem. the test you can perform is:
connect a PC / laptop to your modem if you don't have one already (preferably with the cable)
open console (type cmd then enter in start menu) if you use windows
type: ping 4.2.2.4
and see of you receive replies from it 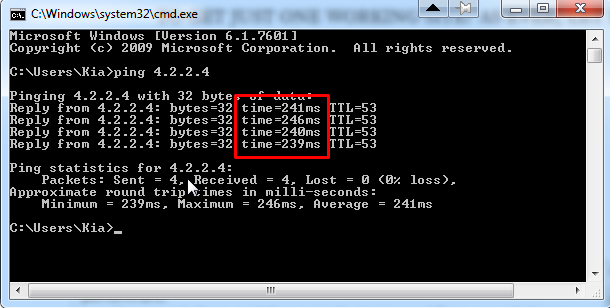 those mean you are connected to internet, getting replies from sun java company in NY and the problem is rooted in your OS/software.
It can be a range of things including changed browser or network settings to viruses and Trojans.
your internet company should've brought their own laptop and test this already.
hit me back with the result and I'll try to troubleshoot the problem. it's as easy as listing the possible causes and do a test to see if it's true.

Sometimes, you may be connected to local access to some sites depending on the countries and the internet providers and the details of the cables and who knows where they all go. I'm an American in Vietnam and they sometimes have problems where websites from the USA will come to me slower or not at all. Some told me that USA websites, or the servers where they are physically stored assuming they're not block chained and crypto and stuff, that the USA websites have to maybe travel through Pacific cables to get to me in Vietnam.
.
They say sharks bite on the internet wires in the ocean and that can disconnect Vietnam from servers in the USA and places over there. So, it depends on where the websites are stored and saved and it depends on how your computer gets to the websites and everything. In other words, I don't know. But I think I have had the same problems and it drives me insane when I run into computer chaos.

I can't even remember what it feels like to live without the urge to constantly check what's going on online...

I guess that means I could certainly need a few weeks of holidays completely offline :P

I am working with the #promo-uk team and @stephenkendal to promote steemit on a UK tour around 22 universities during freshers week! As a promonent UK steemian, we would like to ask for your support and if you have time, even to come and join us for whatever time you can spare at your nearest university!

The tour started in Manchester today, does a trip around the country and ends up in Lancaster on 07th Oct.

THIS link will show you the tour route, meeting times and meet up locations.

THIS link shows you our success around Sheffield today!

It would be really great if you could make it to one of these promotional events to have some fun talking Steemit and letting people know how great it is!!

We are also presenting at the London investors fair on 20th October. We plan to get together with some steemians in a London bar after the event for some drinks (which we will put 150 GBP behind the bar for)
HERE is a summary of our last meetup

Please reply to this or contact me in steemit.chat if you are interested to take part or support our work!

What a great idea! I've DM'd you in chat, speak soon!

yikes, wow that sounds intensely frustrating! It's great to have the perspective of your blessings as you do, but it doesn't change the reality that this makes no sense at all. I'm going to use my magic mysticism to help you from a distance ;-), I've been known to make the impossible possible and fingers crossed that it helps.

The worst part of it is, because I'm on limited time on the net, I have to keep my activities mainly focused on work. Therefore things like replying back to comments, and reading articles on Steemit have taken a big hit :-(

In fact I'm typing this reply quickly before logging off in the library and going to pick up my daughter from school! Then that's it for me for the internet tonight, unless I go out to a friend's.

I've been doing that a lot lately, but poor old Mrs Cryptogee is beginning to miss me!

I'll take any magic at this point, had another engineer come out today, he rang umpteen people, did loads of tests/resets, nada, nothing, zip :-(

still no net...hmmmm I was sure my magic juju would help, I'll try again

I know how you are feeling man, my internet was down for a week last month and it was agony. I had to get a new connection because they could not figure out what was wrong.

Perspective can help us appreciate life more to see how lucky and how much we get and can get through hard work and through luck and through time and everything. I had no internet for the first fifteen or more years of my life. Was born 1985 in Oregon. Didn't use internet a lot until college. And we get used to it like a drug. Facebook becomes an addiction.

@cryptogee --- you've been given a chance for self-improvement many of us internet addicts don't usually have thrust upon us. Have you tried any meditation before? Nothing better than being productive on what you can control away from the internet and when it comes back to you, be even more efficient and focused. You'll get through this, I believe in you! Cheers, Jon.

Apparently Google is now a part of our ether.