It should be here somewhere. She did remember this part of the road. But that didn’t mean much at this point. She looked at the footprints in front of her, and wondered if those were really all hers. She knew she had been walking in circles, but cursed the snow for making it so obvious.

She hugged her parka once more and put one foot in front of the other. The cold was only just bearable, and she wondered if they would listen to her pleas to update the protocol on proper clothing once she returned. If she returned. But even if she did find her way back, she knew they wouldn’t listen to her. She was always one of the last to return, and by the time she got through the medical check-ups, they would all be discussing their favourite jeji teams. She hated sports and knew not to comment because her lack of interest would be noticed the moment she opened her mouth.

She didn’t get why the Company had hired them. They didn’t even hide the fact that they were only in it for the money, the stories they got to tell their friends about some adventure they had while out in the field. Most of which were made up anyway, she was sure of it. Nothing really exciting ever happened to her. Unless you count freezing to death on a desolate road exciting.

As she slogged through the slush and wet, she wondered what would happen if she decided not to walk on. If she just failed to find her way back and froze, would they have an emergency pull mechanism that brought her back immediately? Or would she simply vanish? She hadn’t been at the Company long, but so far she had never noticed anybody disappearing like that.

Perhaps some local would find her and bring her to a hospital. They had hospitals here, right? She still had no idea what time it was, and she didn’t think she would be able to find out. There was electricity, street lights. The road itself was well-maintained. She had passed a few homes, but not being allowed to initiate contact, she had waited in front of them for a while and moved on when it was clear nobody was paying her any attention. It was too cold to stand still for long, anyway.

She could, of course, make it all up. Her report. How were they to know? She wasn’t sure they even processed her reports at all. But no, she refused to give in like that. She liked waking up in the morning with something to look forward to. If she started faking her reports, how would she be able to face her family? They already thought she was insane to have taken this job, but at least she felt passionate about it. She wouldn’t let anything take that away from her. Not even this snowstorm. She might be guessing about where she was, the time, the level of consciousness, but she would still try her best.

Probably she would ask them to send her somewhere warm next time. She almost started giggling, which made the chattering of her teeth sound even more absurd. Why was she here again?

And then she saw what she had been looking for all that time. Small footprints, hardly noticeable. And there, right in front of the shrubs, the handle she so desperately longed for. Several sets of footprints trailed past it. She cursed herself for not paying more attention. She probably walked right past it a few hours ago.

She glanced at her watch. The door should still be open for the next few hours. Slowly she turned around to face the whiteness around her. Nothing had changed in the ten earth hours she had been here. She put her hand on the handle, but hesitated. She could be warm, travelling back home while writing up her report. And it’s not that she could have caught some nasty bug. It was too cold for those critters to leach onto her body for a free transport to Nirn.

No, it was something else. With her hand still on the handle, she looked around. The emptiness had grown on her. She wished she could bring it back with her. If not the actual space, then at least her memories.

Knowing the cold was just temporary, she started to welcome the shivers that ran through her body. She opened her hand and looked at the snowflakes as they hit her bare skin. Just a few minutes ago she was ready to give up. But was she really so desperate to get back that she could only see the beauty of the world around her once she found the way out? She took her hand of the handle and turned around.

With her boots she made a mark in the snow, big enough for her to easily find, but small enough not to rouse any suspicion. Her watch showed she had exactly two more hours. Not enough time to get any decent information on this place. She was lost and would probably even lose her job because of it. How was she to explain this white stuff that disappeared once you touched it, anyway?

But this was not the right time to worry about those things. She still had two hours and she would make the most of it. Even if she froze to death. 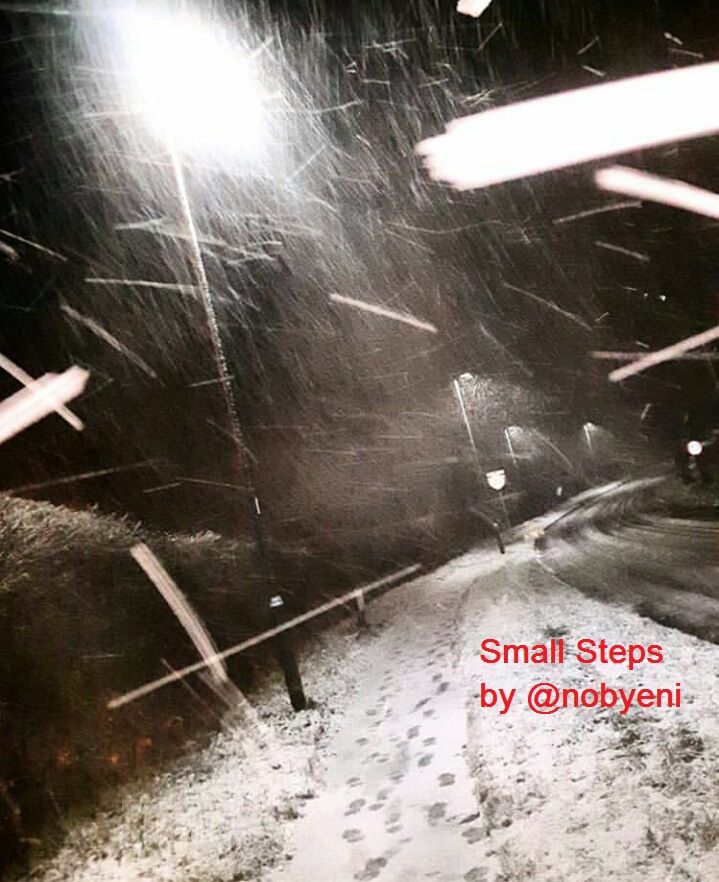 'Small Steps' is a response to this picture by @sad-dad, as part of the Art Prompt Writing Contest organised by @gmuxx. I would like to thank @thewritersblock for having me, editing and being edited is a truly inspiring experience. And in particular, I would like to thank @rhondak and @xanderslee for their help.

Enjoyed this story? Perhaps you'll also enjoy some of my other fiction:
Bubble (100 words exactly)

Great work. And we're happy to have you.

@nobyeni, This is absolutely fantastic. I hope you are so pleased with yourself that you can’t stand it, because you deserve to feel that. :-)

that's so nice. Will definitely enjoy my Sunday now, yes! Thank you!

This is really good. The best I have read today. I enjoyed this.

Amazing short story. I really enjoyed reading this! I hope to read more in future

I had pretty much no idea what the hell was going on for half the story, and I loved it! :D

Haha, that is a nice quote I would put on the back of the cover, hehe. If ever I turn this into a full-swing epic tale of woe, that is...

I felt quite some sadness & Ioneleyness during reading this story. It fits the pictures which provide this feelings very effectively. Maybe the character flirts al little bit too much with the fact of being an outsider. I don't know, maybe a little less obvious would have been nice. But that is only my critic speaking on a high level.

The story did in every case create an emotion. It reminded me on situations I felt similar. Which I do not welcome so much but that is not what writing is always about, right? ;-)

The open end is of course also not to my satisfaction as I would like to know if she is going to die or not - LOL. Obviously she doesn't care that much...

I would like you to read my newest article - I was inspired by you and chose one sub title as "soft core philosophy".

Have fun in the writers club!