Would you like to know how my wife and I are raising a trilingual child because this might be useful for you if as parents you speak a different language at home, and maybe live in a country that doesn't speak your native language. 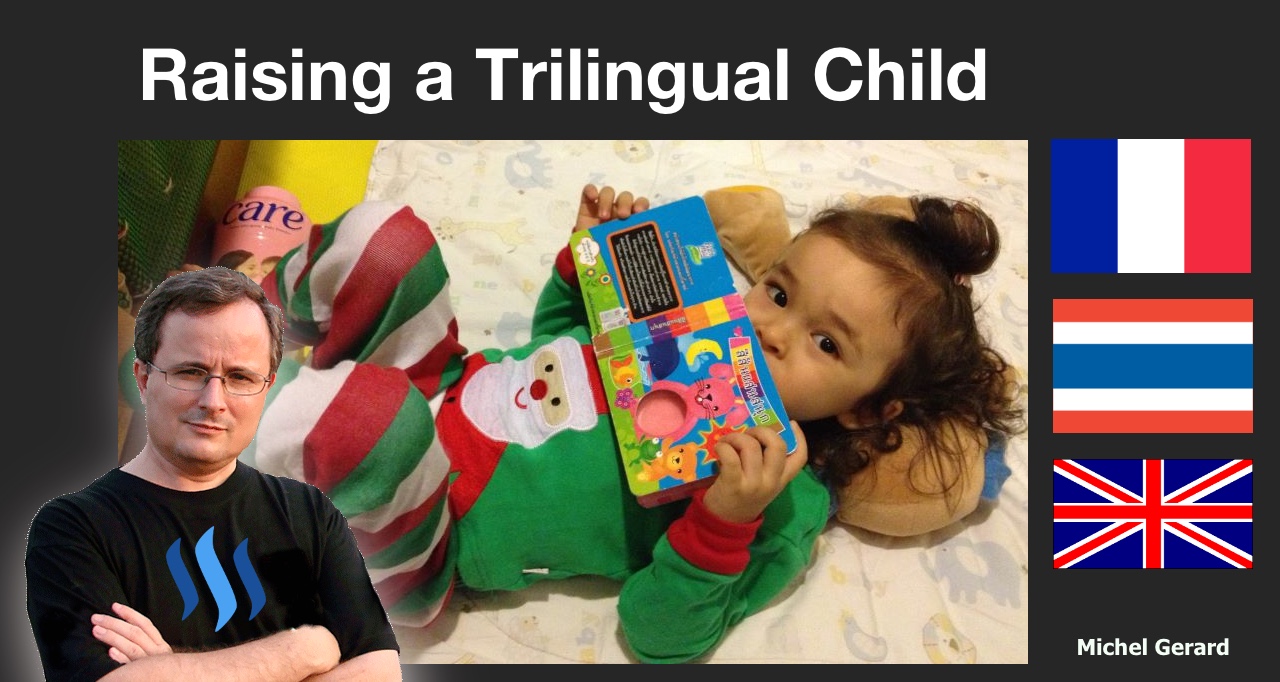 Today I came across a post on Steemit, which was interesting: Bilingual Children - Development

I commented on the post and this inspired me to share my experience because this can be useful to some parents on Steemit, or parents who will search this topic on Google.

I read two books that were very useful, which I don't remember the title as I have given them to a friend, and many other articles, and we decided to go for the one parent one language method. My wife is Thai and I am French, so each of us speaks to our daughter in our own native language. My wife speaks in Thai to her and I speak in French to her, even though I could speak in Thai as well as in English.

My wife and I communicate in Thai at home and English is the added language.

There are two different periods, before the child goes to school and after.

Before 4 years old, before school.

Before 4 years old, my daughter didn't go to school and we started on day one the one parent one language method. So from birth to 4 years old she had listened to the two languages and learned that Daddy speaks this beautiful language and Mommy this musical and fascinating language.

So how came the English into this? 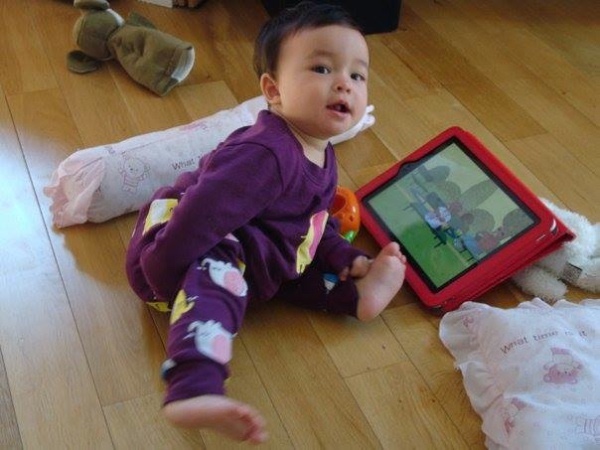 My wife and I never talked to her in English, except when it was for educational purpose, like flash cards, books, toys with words, English alphabets and apps.

From birth she listened to songs both in English and French, never in Thai. Later, cartoons were in French mainly, then English, but Thai was a no-no. We used a lot of educational applications for the iPad in English, which she enjoyed playing with. When in the car, there were always children songs in English or French.

With all this language input, our daughter was still not speaking any of these 3 languages at 4 years old. She knew the alphabet and numbers and some words, but wasn't speaking.

There is some research saying that bilingual or trilingual children do not experience language delay and others that say they do. I believe it all depends on the child because each child learn things at different speeds. In addition, our daughter was diagnosed with autism at two and a half years old that we corrected with frequent occupational therapy and Applied Behavioral Analysis sessions, and her language delay was probably due to the autism, not the multiple languages. She was never medicated by the way, and that was our choice.

You may want to read:

That's what I wrote in this last post when she was 3 years old.

If I had to summarize what she can say now at 34 months, it would be:

In my opinion, speech therapy is good to identify where the child is in language development, but when the child is not ready to speak, it's just a waste of money. We just had a few sessions and that was it. 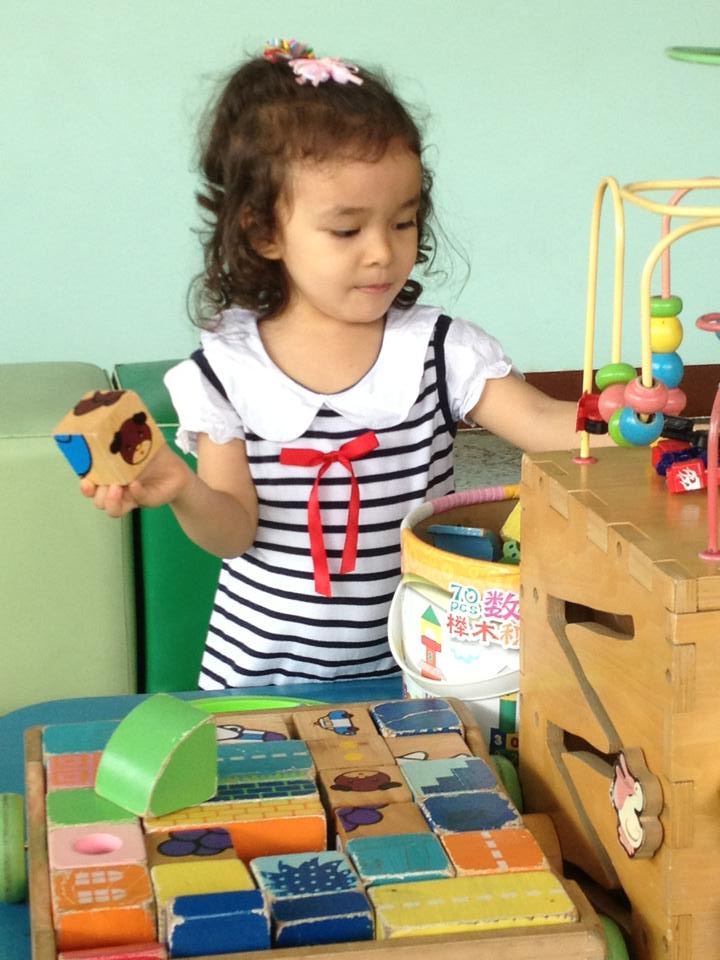 At that time, we still were worried and wondered when she would speak, questioning our one parent one language method.

After 4 years old, going to school.

That's when she started school and we enrolled her in an international* school for pre-KG and KG1 where English was the language taught. Then, we moved her in a Thai school with an English program for KG2 and KG3 she just finished. She will be in Grade 1 in the same school, in May this year. We continued the one parent one language method and the same inputs from other media. Our daughter started to speak at five years old and this was very late. At six she started to understand that 3 languages were involved and what they were. She also perfectly understood that Thai was for Mom and French was for Dad.

Our daughter is 7 years old now and her main language is English, she has a perfect pronunciation with no accent. She is catching up with the Thai language and has lost her foreign accent when speaking Thai. Even though her mother tongue is Thai, living in Thailand, she didn't sound like a native Thai.

Unfortunately, French is behind because there is only one of me. The environment is mainly Thai and English, and even though I speak only in French to her, it is not enough. That's why we have started this year French lessons at the Alliance Française in Bangkok, and this has helped a lot, especially in her motivation to learn more French because she realized other people speak French too.

She can't stop talking and singing now, and I am saying this because from a child saying nothing, it is quite an improvement. This is for parents who are worried: "Be patient!"

So, even if we did not see results immediately, we planted the seeds early on. It is just now a matter of learning more vocabulary and practicing all three languages. 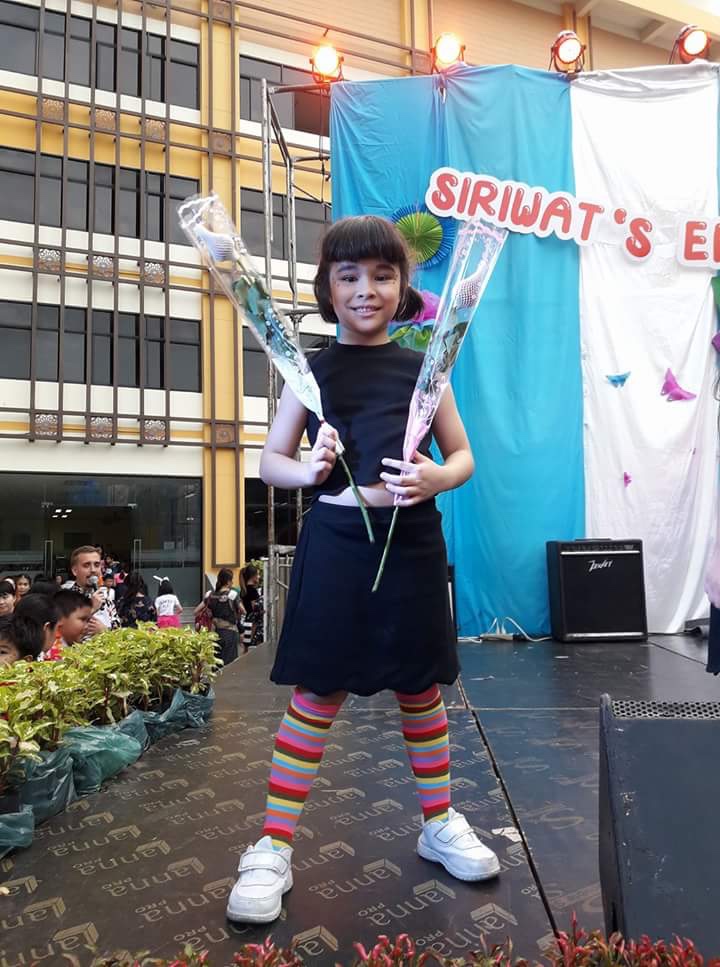 When she plays alone she will use the 3 languages, do translations. She knows I can understand Thai, so she would talk to me in Thai when she can't say it in French and I will always respond in French in words she can understand. I will teach her new French words, tell her the equivalent in English.

This is the experience we have in our family about language development and I hope this post is useful for you if you want to raise a child with multiple languages.

This made me think of how many languages are spoken within my family - including partners and kids - I think it comes to about 10, with varying degrees of fluency!

My daughter has always been fascinated as to why people speak different languages. Her own exposure, in order of fluency, is English, Thai, Laos, Italian and Japanese. She is 10 and English is now definitely the dominant language.

However, I do have a friend in a similar situation to you in that he is French, wife is Thai but they really wanted their kid to speak fluent English, hence the switch to an English International School. Their son is now pretty fluent in all 3 languages.

My own experience as a bilingual child - although also exposed to other languages - was that the languages "stuck" around the age of 8; before that, it was easy to lose fluency by changing country.

Like you, I was adamant my daughter would speak to me only in English; the funny part is that she also prefers speaking English to her mother!

Good job in having a thought-out method to ensure your daughter has the best possible language skills.

Thank you very much @rycharde for explaining your experience with raising a multilingual kid. When it's done early it's easier to assimilate languages.

What a journey you have all been through. Your daughter is certainly very lucky to be exposed to so many languages at home. My 5 Australian children eagerly set upon learning the Cambodian language when we moved here 6 years ago. Now, they are all different at stages of language development in Khmer even though they all started at the same time. One is speaking fluent described as native sounding by locals. Another observation is my boys do not have half the vocabulary of my daughters. Although come to think about it my3 daughters never want to stop talking and singing like your daughter now, so that makes sense lol.

Thank you @mumma-monza for your comment and writing about your experience with 5 children. It shows that in the same environment different children learn a language at different speeds.

That's awesome! I hope my children are trilingual.

@gmichelbkk, you're a really inspirational father Michel, you did the very best you could as early as you could. She'll grow up to benefit with many advantages of 3 languages and more to come probably in the future...well done!

Thank you very much @dominikboecker for your kind comment.

Like what patience pays his fruits!!
Very good advice for future parents, you were able to take care of it very early, and it has been beneficial for her in the long run.
She is a beautiful little girl, you and your wife must be very proud of her !!!

Thank you very much @archeothot for your kind words.

Beautiful daughter! Fascinating story. I think the brain stimulation you gave her will one day pay off very well for her. She will be so versatile and will find doors opening that would, otherwise, been closed. Fantastic. Blessings.

Thank you very much for your kind comment @mistermercury.

Very happy for your daughter and I am full of respect for you and your wife for sticking to the one parent one language approach. Glad my post could inspire you to write this. :) Waoh! Its not easy, raising that kind of kid with trilingual approach but it worth the time and energy involved. What you are raising is what I call "league of nations", I wish your beautiful daughter the best of knowledge and wisdom to be at the top. God bless you sir.

Thank you very much @princluv for your kind comment and wishes.