Wow!!!Guess what fellow steemians? Its Goldendproject's first ever contest filled with fun and a lot of excitement. 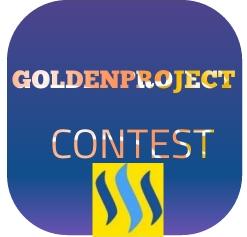 WHY ARE WE ORGANIZING THE CONTEST?

We trust that steemit can be utilized as an apparatus of social change. To start with, we are organizing our first ever contest to grow our community and also to help steemians in anyway.

In this version of the TELL YOUR STORY CONTEST, compose a story(not in excess of 100words) censuring assault. Reveal to us YOUR SUCCESS STORY ON STEEMIT AND YOUR LOVE FOR STEEMIT.

Use the tag "goldenproject" and "gpc" in your entry

Article MUST not be in excess of 250 words.

All entries MUST be posted as a reply to this post.

Just a single entry for each person is permitted.

Just unique works will be considered. No literary theft.

Just entries that meet the accommodation rules will be considered.

We look forward to everyone entries, it is going to be fun!

At the end of the day, when you come home tired after all the days work. You just want to come back to that place that makes you feel home. That is, in the evening, with your loved ones on the way to home. There is something about that time when the sky is golden. Everything is so calm and quiet. It's like the nature is calling you back to come home. This moment is really golden. Here is my entry to the contest, to show how lucky I am coming across steemit.
I'm indeed <fortunate'
God bless @goldenproject

My Steemit Story
Earlier this year, my friend @aerick told me about a community where decentralized blockchain system was in real utilisation, doubling as a social media and growing to thousands of more users. I smiled softly while looking for 'what was the catch', because I felt, well, usually such things have a 'catch' or other sides to them where one can loose something to the profit of the site.. The next part of the story is not far fetched o! As you can see, my presence here speaks for itself. Somehow I managed to give it a try and I have enjoyed it every bit. We are both currently actively involved in introducing even more persons.

The Turn around:
My first contest was by @ogoowinner, the #npc challenge! I had the first feel of major appreciation on steemit. Thank you ma! I began to create my own content, follow others, resteem, upvote what I liked and comment regularly, and frankly so did my reputation and steemit income begin to rise. I am grateful to the organisers and donors of #gpc and @goldenproject, which I am a part of even on WhatsApp, I have been exposed to their skills of strategic planning also. Thank you again for this opportunity to share my story.
-@yowanetwork

Ur on right place. So keep it up

O thanks alot bro. I appreciate you @hasim5164 Great man

There are lots of things I have gained ever since I joined steemit, thanks to @mimy who invited me.

THE FIRST IS MONEY
My first pay-out on steemit which was just 20SBD gave me the highest amount from all the work I have done in my life. Before then, I was already scared because as a graduate, what I was earning was a little above my transport fare.

STEEMIT GAVE ME A VOICE
Steemit gave me the opportunity to write about the things I love. On steemit, I am not restricted, unlike when I worked for others. On steemit, I decide to express myself anyhow I like.

STEEMIT GAVE ME GREAT ONLINE FRIENDS
There is something thrilling about making and interacting with cool friends you can't see but know they care. Steemit has given me online friends that I can't trade for any other thing.

IT HAS INCREASED MY READING AND WRITING SKILL
I don't fancy reading, but on steemit, in order to make good comments, I have learnt to read different articles which ranges from those on relationship, fiction, watching Dtubes, science posts and especially cryptocurrency.

Before, I was a great hater of Cryptocurrency because I thought it was like other ponzi schemes, but now, I am a great fan and have started inviting my friends to start investing in it.

Thanks so much to steemit. It is my shining light, the hope I got when every other thing around seemed hopeless.

Golden project is indeed doing a cool job, and I am happy to be there.

Although steemit has not rewarded me much in respect to the financial return, yet i completely agree with the part where you said it has increased your writing and reading skills; it's actually true for me, too.
I pray you win this contest. Go @chemmy!

https://steemit.com/goldenproject/@josephlacsamana/goldenproject-contest-1-my-entry-success#comments HERE IS MY ENTRY! GOD BLESS YOU!

THANKYOU @goldenproject for this contest!

@goldenproject, welldone! You guys are doing a fantastic job, please keep it up.

I choose Steemit for many reasons. Here are mine: 🙌

Here is a growing platform were you are free to post informations like you are a small journalist.You can get paid for what are you writing, commenting or upvoting.You can meet new people from different countries but you have to maintain a civilized writing.Thanks to #DTube you can post videos and the two platforms are working together, so you dont need to share something from DTube, it gets here right away.You can use your money to use bots, it is like a reinvestment on your account without someone trying to force you, its your free willing.You dont have a lot of commercials you are not interested in.You choose what you want to read or what you want to do with your money.Here you can find awesome people that will hep you understand what steemit means.Its a source of informations coming from different cultures, parts of this Earth.A good leadership because there`s nothing the owners of steemit can override.

So , why to choose Steemit? Because of harnessing your potential and time.
At the start it made be a bit difficult, but, in a short time, you will be part of a group, like I am in #Discord Channel.

This is my entry for the contest