Hebrew Wedding Traditions and the Bride of Christ 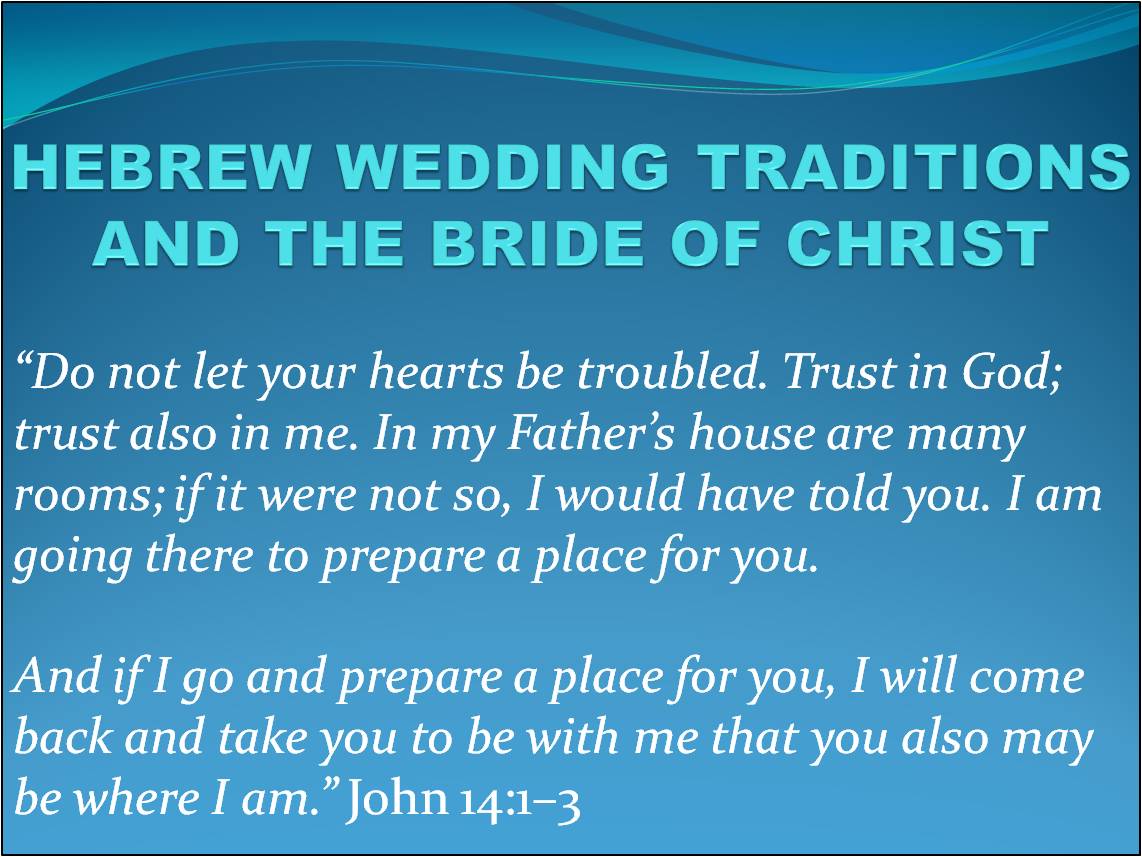 PART I – THE BETROTHAL

In typical ancient Israelite ceremonies, prearranged marriages were set by the bridal couple’s family. A friend of the bridegroom negotiated on behalf of the groom and his father with the designated representative of the bride’s father. An appropriate dowry was determined, and the bride’s father was invited to use the interest from a dowry but could not spend the principal sum. The dowry was held in trust for the bride in case of her becoming widowed or divorced. In compensation for the loss of the daughter’s work, a contribution to helping her household, a “bride’s price” was paid to the bride’s family by the groom. The traditional Jewish wedding ceremony consisted of two segments. The first part, kiddushin, is a betrothal. During the betrothal ceremony, two benedictions are shared, the first one over a cup of wine. Following the blessing and sharing of the wine, the bridegroom gives the bride an object of value in the presence of at least two witnesses. The bridegroom recites the marriage formula:

“Behold, you are consecrated unto me according to the Law of Moses and Israel.” After the groom said these words, a second benediction is recited. This second blessing is offered to help enable the couple to remain chaste during their engagement.

THE FIRST COMING OF CHRIST FULFILLED THE BETROTHAL

The best man was John the Baptist:

To this John replied, “A man can receive only what is given him from heaven. You yourselves can testify that I said, ‘I am not the Christ but am sent ahead of him.’ The bride belongs to the bridegroom. The friend who attends the bridegroom waits and listens for him, and is full of joy when he hears the bridegroom’s voice. That joy is mine, and it is now complete. He must become greater, I must become less.” John 3:27–30

The bridal price had to be paid. The price to purchase the bride of Christ was His own blood!

And they sang a new song, saying: “You are worthy to take the scroll and to open its seals, because you were slain, and with your blood you purchased men for God from every tribe and language and people and nation. Revelation 5:9 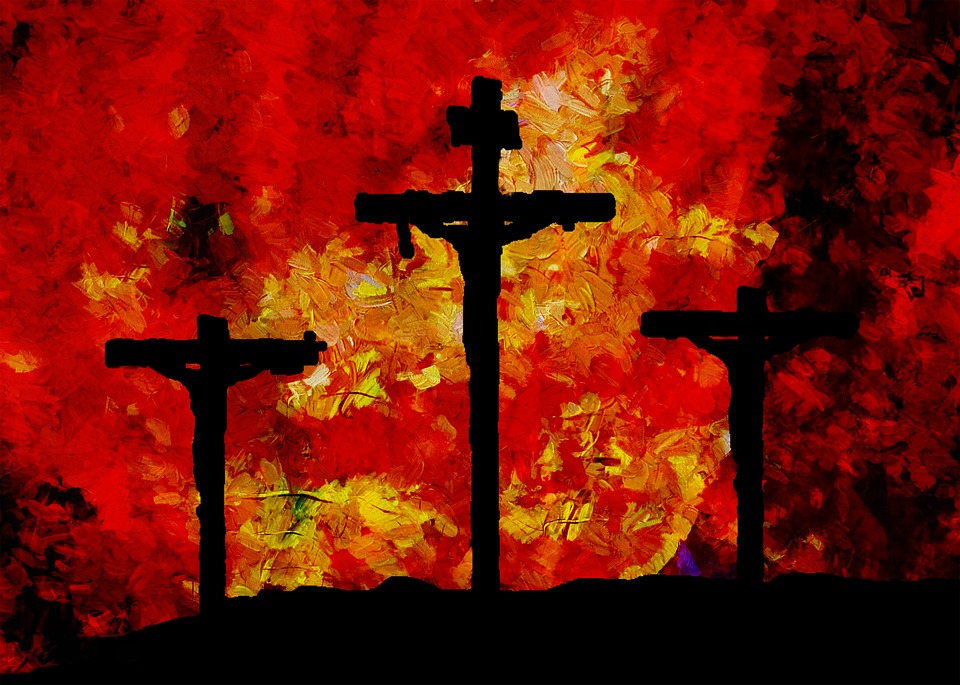 The betrothal included the reciting of a benediction and the sharing of a cup of wine:

Then he [Jesus Christ] took the cup, gave thanks and offered it to them, saying, “Drink from it, all of you.” Matthew 26:27

During the ceremony, the groom gave the bride a bride gift in the presence of two witnesses:

On one occasion, while he was eating with them, he gave them this command: “Do not leave Jerusalem, but wait for the gift my Father promised, which you have heard me speak about. For John baptized with water, but in a few days you will be baptized with the Holy Spirit.”Acts 1:4–5

When Jesus ascended to Heaven, He sat down at the right hand of God the Father (Hebrews 1:3). The bride’s gift, the promised Holy Spirit, was given to the Church on Pentecost in the presence of two heavenly witnesses—God the Father and Jesus Christ.

The second portion of the wedding ceremony is the nissu’in, or marriage proper. In the case of a young maiden who has never married, the nissu’in took place one year after the kiddushin betrothal.

During the betrothal year, the bridegroom would return to his father’s home to build the couple’s new home nearby, while the bride prepared her wedding clothes. In the case of a wealthy family, clothes would be provided for all of the wedding guests! Since the couple would be anxious to consummate their marriage, the father of the groom would have to approve the construction of their honeymoon cottage and would be the final authority as to when the bridegroom could return to his fiancée’s home for his bride.

“Do not let your hearts be troubled. Trust in God; trust also in me. In my Father’s house are many rooms; if it were not so, I would have told you. I am going there to prepare a place for you. And if I go and prepare a place for you, I will come back and take you to be with me that you also may be where I am.” John 14:1–3

“No one knows about that day or hour, not even the angels in heaven, nor the Son, but only the Father.” Matthew 24:36

Just as a betrothed young maiden knew it would take one year for the bridegroom to return, but did not know exactly when he would be ready, the Church will not know the exact day or hour but will know the approximate return of the Lord.

A formal marriage contract written in Aramaic (the language of the Babylonian captivity, later used in Israel) was signed. This ketubba contract literally means, “That which is written.” The bride and the bridegroom were dressed like royalty for their nuptials. The groom would wear a crown and the bride would often work a circlet of coins from her dowry into her headdress.

The rites of marriage were held under a huppa, a wedding canopy. Benedictions were recited, and later that evening, a processional would move from the bride’s house, where the wedding ceremony took place, to the new home prepared by the groom. The bride’s veil would be removed and then placed upon the shoulders of the groom. A declaration was made of the groom that “the government will be upon his shoulders.” The young maidens in attendance would carry long poles with lighted, oil-soaked rags on top. After consummation of the marriage, there was an exhibition of evidence of the bride’s virginity; a bloodstained sheet or garment of clothing was presented to the assemblage (see Deuteronomy 22:13–17). A bridal week ensued, which included seven days of joyous feasting and merriment (Genesis 29:27).

Then I heard what sounded like a great multitude, like the roar of rushing waters and like loud peals of thunder, shouting: “Hallelujah! For our LORD God Almighty reigns. Let us rejoice and be glad and give him glory! For the wedding of the Lamb has come, and his bride has made herself ready. Fine linen, bright and clean, was given her to wear.” Revelation 19:6-8

If you were blessed by this teaching, please check out my Hebrew based series:

"Revealing the Mysteries of the Bible"

Part V - The Trinity Revealed in the Hebrew Scriptures
https://steemit.com/christianity/@lastdays/the-trinity-revealed-in-the-hebrew-scriptures

Part VI - The Mystery of God Accomplished at the Rapture
https://steemit.com/christianity/@lastdays/the-mystery-of-god-accomplished-at-the-rapture

This is such wonderful teaching and I loved reading it!

Thank you and bless you. You not only have the gift of teaching, but like Barnabas, you are an encourager.