Bitconnect an alleged FRAUD runs its own coin BCC. In fact, Bitconnect (BCC) is rated number thirteen on coin market cap with a market cap of $800 million.
https://coinmarketcap.com/ 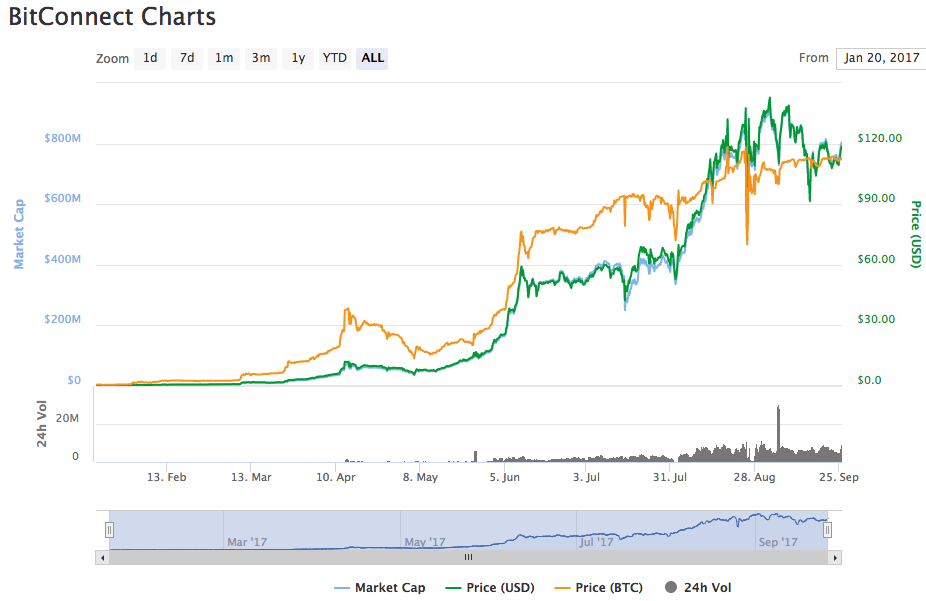 And we can see good volume on the chart.

Looks can be deceiving!

As you look at the chart you may notice that volume has been increasing over the last few months with the price. This would be expected.

And you may be kicking yourself for not having bought some in the January when the price was low! Well just wait.

First off. The whole thing is a con game and a fraud. But right now we are focused on market volume.

Almost all of this volume is on the BCC exchange. That is a private exchange run by the same crooks- I mean people- who run Bitconnect. That exchange has 96% of the volume. That means this is not a liquid cyptocurrency. It can be traded on other exchanges, but most volume is part of the pyramid scheme – I mean investment program.

https://coinmarketcap.com/currencies/bitconnect/#markets
Ok so which of these numbers are real and which are fake?
I trust the dates. 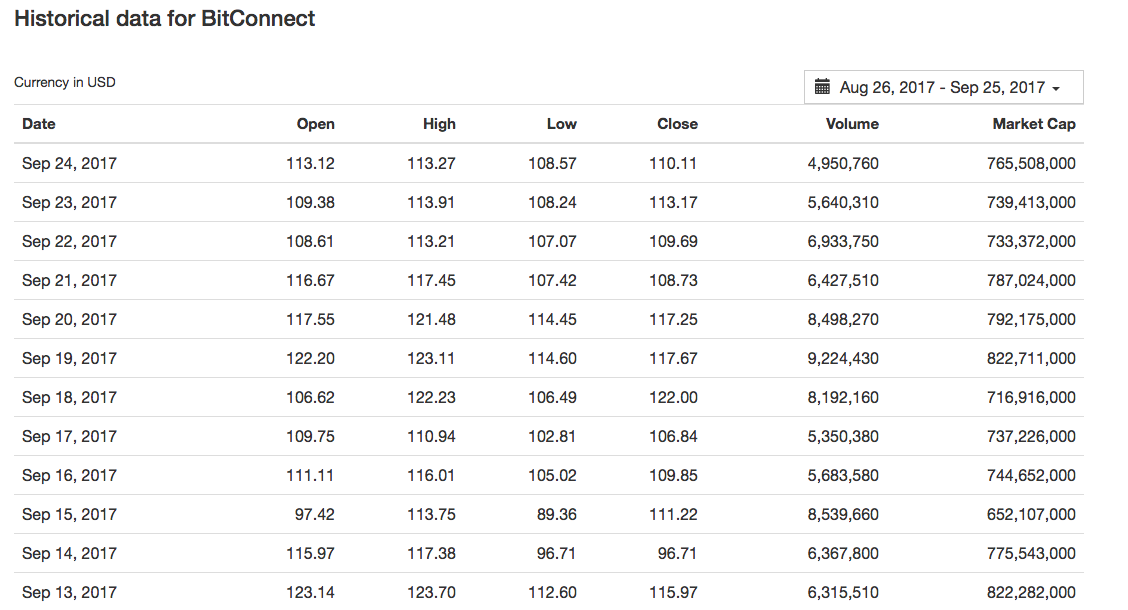 You don’t trust the numbers?

Yeah, it is that bad! That said we will work with what we got...

Bitconnect closely controls the supply of the BCC coin. As more people come in they jack up the price in a complicated scheme –but that is allegations for another time. Let’s look at volume.

Do these volume numbers mean anything?

Well, volume did trade somewhere. But that doesn’t mean it is real volume. It could have been a bot moving coins back and forth!

The Bot That Moves Money

Imagine, some programmer might give a bot several hundred coins. Then program it to move those coins every few minutes. Day and night. One bot, could have 905 addresses associated with it. It moves the money from address one to address two. Then from Address two to address one. This bot could move 332 transactions a day, meaning it made about 150 round trips. Each time it could move a small amount –like 10 BCC worth about $1,160 at current (fake) market prices. This bot could work day and night for 13 days. It could rack up 32,260 coins moves which would represent 3.2 million dollars?

Who would do such a thing?
8Ucof5mpyX8bLuczhcAfamziXoqqotgrum Yep here is the proof!
https://chainz.cryptoid.info/bcc/address.dws?8Ucof5mpyX8bLuczhcAfamziXoqqotgrum.htm
Go look in the block chain yourself!

How much of this volume is artificial?
I am not sure yet. And I don’t know an easy way to find out. I am open to suggestions. I would guestimate at 7,000 people in the scam with about 100 joining every day. The minimum amount to lend is $100. That would mean that about 100 times 100 is $10,000 going in. Also with 7,000 people in the scam about 1% need to join every day. That would be 70 people. When not enough new people join; Ponzi schemes collapse. That said those estimates of legitmate volume $20,000 are way less than the numbers we see.

How many Bots are there?
I don't know. If you know an easy way to find that answer let me know in the comments!

Why would they do that?

It makes the block chain more confusing so it is harder to see how they are cooking the books.

Having a top crypto currency really adds to the legitimacy to the scam.

If someone else has a better explanation on why there is all this activity in the BCC blockchain. I am very interested. Please share your ideas in the comments below.

If you missed my fist post... Catch up.
https://steemit.com/fraud/@cryptick/is-bitconnect-a-ponzi-scheme-post-1

This is great work you have done to break down this cryptocurrency / trading crap.

I've been telling people to avoid bitconnect for some time now, but it's good to see someone showing why!

Thanks for posting this! I saw this one first, then read your first post on it. Great analysis of the blockchain bots!

I made a comment on the other one that I had written up an analysis of BitConnect a couple months ago, I hope you don't mind my sharing it on both your posts (hope it's not perceived as spamming -- it can't be upvoted any more; I'm just sharing the information):

No problem it is a well written post and goes to further the SCAM/FRAUD bit. I have some more posts coming to support this theme; it just takes time to completely document and show what is going on!

Excellent, I've followed you. Know, though, that I'm recovering from multiple concussions and might not remember past interactions -- the four major symptoms being forgetfulness, headaches, sleep issues, and irritability. I try not to let the latter show through here although I typed like a pirate/sailor for one a few months ago when I tried to do some programming...

Anyway, if you might make a comment to me on one of my posts/comments (or even here!), that you've done an update, I'd appreciate it. :)

Oh yeah... there is more! https://steemit.com/bitconnect/@cryptick/bitconnect-scam-how-many-people-are-involved-post-4

Great thank you, will check it out!

Thanks for eye opener.. im still with bitconnect.....
I have my $1000 capital back now.. my compound earning are still making me money.. so i can tell you im safe now and ready to lose whats left on my bitconnect account.. i will enjoy my daily earnings while they are around... but as of now... im rolling it.. well see if they would still be around 2018 to 2019 or 2020..

With your capital back you can play the game much safer. There was discussion that the change in payout plans (recruitment/referral bonus levels) was an indication the end may be coming soon. Unfortunately, as you likely saw from my other blogs, these are all guesses based on questionable data. Glad I was able to open some eyes...

Good job bro... thanks.. this blog served as a reminder to everyone.. just to play smarter..