Ripple throws us back to 20-th century 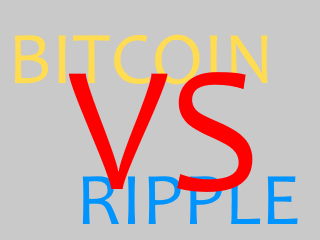 So today is January 2018 and what we see. Ripple is trying to take over Bitcoin. Is it so good? Why is it happening? Let’s see and get to the bottom of this.

Most important reason XRP is raising in its price nowadays is the banks. Stop. What? Aren’t we using cryptocurrencies to forget central banks as 20-th century’s worst nightmare? Haven’t the bankers printed banknotes to themselves without any limits, launched wars, taken huge percent and fees, pounded in bondage, cut zeros from our accounts and froze them, withdrawn the funds for the benefit of some doubtful organizations and etc.? Yes, that’s them. So Ripple is rising because more and more banks establish partnership with it.

Imagine you’re large worldwide bank chief. You ask your technical consultant what is Bitcoin, blockchain, ICO and cryptocurrencies. And you don’t like the answers because you want people to be in need of your cabalistic services. So you ask your consultant how your bank can try to look modern, innovative, participating in this blockchain revolution for its own good. Declaring war to Bitcoin and crypto is useless he says. But there is one way. The bank can establish partnership with Ripple. It takes nothing from it and gives no credits to Bitcoin. From the other hand this move says to geeks and specialists that the bank is modern and up with time. And as simple as that everyone benefits.

Second thing is centralized Ripple itself with emission, rules and consensus control by the one and only organization. I did not find in white paper that emission is limited. But price grows more and more. Banks still have the ultimate power and they pump Ripple further so Bitcoin will eventually move to the second places by capitalization. That’s the tactics they are trying for now. If you cannot destroy then you should lead it. Lead the blockchain revolution. Without blockchain, Proof of Work or Proof of Stake. Because Ripple is not really a blockchain company. Go look if for yourself. The only way Ripple can be what it meant to be is if participating banks accept XRP as a currency for mutual settlements. But that is not going to happen because XRP is too volatile. Even if it would it will give the world just a small step forward. But Bitcoin is revolution.

What will happen next is getting more and more interesting. Will Ripple become #1 currency by capitalization? What next? Emission of 100 billions XRP for participating banks?  Follow me and we will stay tuned together. If you like this topic you should upvote so I know it and post more interesting facts.

It's truly ironic how a coin that partners up with banks is now the 2nd highest in market cap of all coins.

@vl248 check out my latest post on the insane rise of Ripple in the past month and don't forget to follow ;)

I guess that's the tactics they try to use now to take down Bitcoin. It is very interesting what will happen next.

I never looked at it this way. I always thought they were trying to join the crypto world to get in the game before many of their customers turn their backs on them. Never have I had this thought about banks investing in Ripple in order to eventually eliminate other coins and have a majority share in this new market.

The people that are currently buying some form of crypto do not even understand the basics of the technology nor the idea behind it. Banks will proceed tactically like described in your post. Another group of players will be the central banks, that will potentially not stay together with commercial financial institutions in this case. They currently do not have a direct distribution path to customers and have to rely on commercial banks to distribute money broadly. Blockchain technology could let them bypass these institution. Unfortunately this would not benefit the original decentralization idea either.
The current speculation and bubble building will harm crypto much more then legislation would ever be able to. In the long term it will survive if there are economic players using crypto for exchanging value, not solely as a store of value or even a speculative object.

Interesting facts. I share the same sentiments and am curious to see how banking institutions, large corporations and governmental agencies will react/deal with humanity's current shift towards digital barter/finance. And how block chain technology will effect our day to day lives. Keep up the good work. I will definitely be following.

Congratulations @vl248! You have received a personal award!