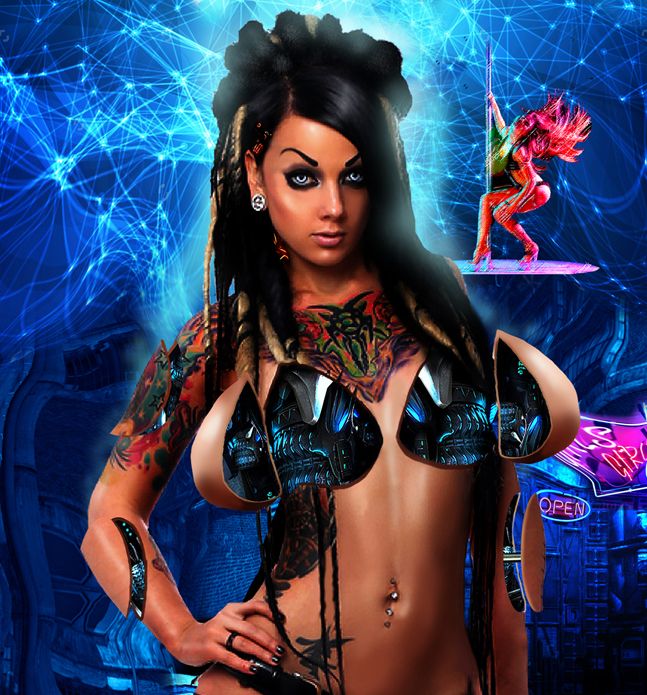 A room full of eyeballs are on my ass as I make my way over to Phillips. I could swear I’m stepping over a few tongues along the way, some are forked and some with hair growing from puss filled sores.

Suddenly some loud obnoxious laughter sounds out over the crowd, like something dying in the wilderness. What in the world is that? I swear it’s getting louder and louder irritating my freaking ears! All of a sudden a big ass boot with cow shit all over the bottom of it falls in my path like a massive fallen tree trunk blocking a road. The boot was probably a size 15 or more, I imagined King Kong’s hillbilly cousin was at the end of it.

This oversized Bigfoot hocks up a loogie, the nauseating glop lands in front of me, there’s some chunks of something floating in it – probably pieces of his brain rotted out by years of habitual drinking. Then from the darkened booth, “How much?” With that awful hillbilly twang.

I know exactly what this sleazebag means, “Excuse me, but I'm not a whore. So please move your canoe sized boot out of my way!”

Then that awful laugh comes out again from the pit where this big bastard resides. A big leathery hand with calluses and warts grabs the nearby post and pulls up his enormous weight. The booth shakes and creaks as a massive figure wearing a big floppy hat emerges from the murky depths of a honky-tonk bar.

Judging by that paw, it’s pretty obvious that personal hygiene is not on this bruiser’s daily “To do” list. But honestly, I’ve seen apes with cleaner nails, I don’t even want to imagine what’s under those big yellowish nails besides fungus.

His massive shadow slowly covers me. This has to be the biggest, smellest bearded hillbilly I’ve ever seen! I can see how easily he could be mistaken for a Big Foot. His odor is ghastly, he smells like every goat, pig, and sheep he’s ever had an intimate relationship with. Oh God, look at those tumbleweeds sticking out of each nostril. He has to be the most disgusting individual I’ve ever seen!

He bellows, “Hey, two-bit whore, I’m willing to pay a little more since your the prettiest one I’ve ever seen.”
I don’t know if that was supposed to be a compliment or not, but I don’t have time for this crap. I circle around that humongous sub-human to continue to the pool table where Phillips is at. But heavy footsteps come up behind me, that's when I know this bastard isn’t going to let up!

"Come on bitch, how much!"
His hot smelly breath blows my hair forward with a moistened wad of gooey spit.

Phillips is about to sink an 8 ball when all the commotion grabs his attention. He carefully lays the pool cue down on the table, his body becomes rigid and ready for action. He squints his eyes to see what’s coming through the thick cigarette smoke. I really start moving to reach him, but the sound of big hoofed feet are quickly coming up behind me, it sounded like an oversized Porky Pig chasing me.

Phillips aggressively steps in front of me – blocking my pursuer, my knight in shining armor – okay, let me dream. Moving like an astonishing bolt of lightning, accompanied with the thundering sound of his fist smacking against this mass of flesh, bone and fat, topples the huge hog-shaped body across the pool table with an ear-deafening thud.

Pool balls bounce around the table as it wobbles about, I don’t know what possibly could be holding it up. The giant is spread out on that table like he just fell off the beanstalk. Then loud abrasive snoring erupts, followed by an awful belch that let’s loose from the nauseating pile of blubber.

And just when you think things couldn’t get any worse, everyone around the table falls back as putrid gas exits that big fool’s ass. My eyes even start to water as I wait for the smelly flatulence to clear. I thought everyone was going to start celebrating and chanting something like "Ding dong the slob is dead," or something, but then he seems to abruptly stop breathing.

One of the other pool players with a handkerchief over his nose and mouth to escape the stench, “Is he alright?”
Phillips casually strolls up and pounds the big oaf on the chest with his fist, as if hitting the old fashioned jukebox in the bar to stop it from skipping. This obliviously works because the sack of fat starts to snore again, sounding like a out of control train heading our way.
Phillips grabs the guy’s hat from the bar room floor and tosses it like a Frisbee skipping it on the thick smoky air and landing it perfectly on the sleeping giants chest.

Phillips turns to me, “He's alright, he gets like that when he's had to much to drink, I think it was time for beddy-bye anyway.”