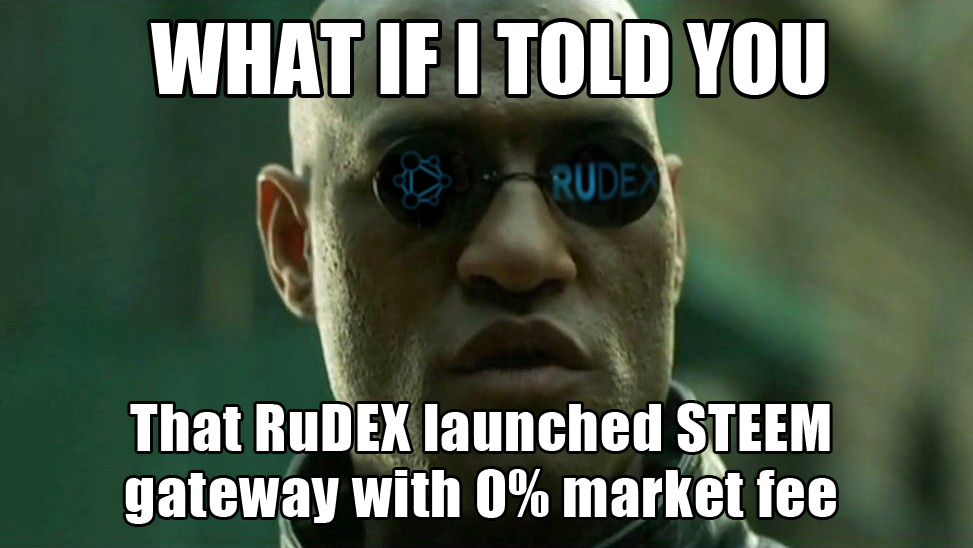 When we announced our STEEM witness campaign back in March, we’ve promised to create gateways for all Graphene-based chains, including STEEM. Since then we’ve been keeping the full monty set of nodes (witness, backup, and seed), as we prefer the “do first, talk about it later” approach. We did not put any special efforts to get to the top, and perhaps because of that were number 92 in steemd.com/witnesses until recently.

However now, after acquiring experience with other Graphene chains and lengthy closed testing of STEEM and SBD gateway for Bitshares DEX we’re proud to announce its public testing and are aiming at least to get closer to the top witnesses.

Ever since BitsharesX days the DPoS system intended that the community would vote for those who not just supports the required technical equipment, but also provides some additional solutions that are interesting to the community. We hope that a Bitshares gateway with 0% trading fee for STEEM & SBD is such a solution from us. Your votes for our @blockchained witness are what allows us to keep it that low.

We understand that our English posts can be lost in our Russian language publications, that is why after consideration we’ve started to repost all of our English posts to our @rudex account. Please follow it to remain up to date on our launches and our activity in general.

By now you’ve most certainly noticed, that we’re launching gateways for Graphene-based chains. After PPY, we launched gateways for GOLOS/GBG and most recently for MUSE.

The results of operating our PPY gateway confirmed our theory about demand for alternate gateways to the DEX with architecture and features differing from those already present. Besides, PPY proved that assets can and should have high liquidity on Bitshares DEX. For example, right now ~99% of all PPY daily volume occurs on Bitshares DEX. The experience we’ve had with PPY gateway helped us move closer to our goal.

Now, after successful testing of gateways for a variety of Graphene chains we are ready to launch gateways for STEEM & SBD.

Trading STEEM/SBD on RuDEX has several advantages over trading them on centralized exchanges. Here are the main ones:

During the design of the gateway we were aiming to ensure the following parameters:

One of the goals during the gateway creation was an ability to publicly audit it.

As you probably noticed recently we registered RUDEX.STEEM and RUDEX.SBD assets on the Bitshares blockchain.

That way the amount of UIA tokens (RUDEX.STEEM/RUDEX.SBD) is de-facto equal to the amount on our wallets. For STEEM it is @rudex.

In the future our gateways would have a stand-alone section for auditing them on rudex.org. But for now you can use the following services:

Our goal was not only to create a convenient instrument for people to use (we’re working on making it completely open source), but also move towards more decentralization, since more gateways the DEX has, the less centralization around any one of them.

One of the features of our gateway that makes it different from the existing ones, is that as a Graphene ambassador, we’re setting 0% market fees for chains based on this technology. We can afford that from the witness payments that we receive.

If you like what we’re doing please vote for us!

A quick guide to working with our gateway

To deposit STEEM/SBD to DEX

To withdraw STEEM/SBD from DEX

Support our BLOCKCHAINED witness on Steem blockchain. Your votes give us an incentive for continuous development of the network!

Why should you vote for our BLOCKCHAINED witness?

In the near future similar gateways would be launched for remaining Graphene-based chains. Next up on our plans is to start working on an ERC20 gateway, so it would be possible to list EOS tokens on the DEX. When the gateways are ready we’ll send a pull request upstream to make our gateway available in all other wallets and web interfaces of Bitshares.

In time we’ll also create gateways for the coins that we consider the market is going to be interested in, but for non-graphene chains those markets will have some minimal market fees.

You guys are awesome, will vote for your witness! Thank you for all your hard work - the amount of development happening on the Bitshares DEX is amazing! You are so very right about using decentralized exchanges vs. centralized, and I think we are going to see Bitshares go crazy later in Oct when all the Chinese exchanges shut down. DEX FTW!

You are damn right, time to stack up bitshares xD

We also appreciate all the votes for our witness! :-)

Do you guys have listed EOS? Would love to buy some EOS with SBD.

Not yet, we are planning to add a ERC20 gateway, that would allow to add EOS (and is foremost done to support that).

do you have an release date? This would be awesome and would boost the liquidity on your exchange.

Great information looking forward if other plattforms would do the same :-)

This is a welcome development and I will be looking forward trading on this platform.

This is great to hear! Keep up the great work!

We would be greatful if you vote for our @blockchained witness on steem, every little bit helps. :-)

Thank you I m your new follower

Thank you. We'd appreciate your vote for our @blockchained witness on Steem. :-)

You had my vote since the start ;)

Yeah, I went and saw that you're voting for us. Thanks! :D

By the way ,I started following you and I would appreciate your follow back too .
please visit my blog and vote me too

Great to hear. I've really been enjoying Bitshares and OpenLedger. I am looking forward to trying RUDEX.

Followed and voted for your witness. We always need more "Graphene Ambassador"s. :)

Thanks for the support! We've been doing outreach to Russian speaking audience for Steem, Bitshares and other graphene based chains for a bit more than one year now. :-)

Thanks! We'd be gratefull if you go an extra mile and vote for our @blockchained witness!

Voted for your witness! Keep up the good work!

Please, let me know about your decision in return message 😉

Excellent work!)) You do a lot for us!) I vouch for you as a witness! Wish you success)))

Trading STEEM/SBD on RuDEX has several advantages over trading them on centralized exchanges.

Like getting hacked by "ze russians"! ;) Joking, sounds kinda cool but I can't see any images!

Come to Bitshares hangout this saturday. I'll talk about plans of RuDEX team.

Steem and sbd pairs are nearly dead on bitshares, But now with no trading fees I might start using them xD

Voted for witness as well, every bit counts :)

Awesome work, looking forward to ERC20-Gateway, upvoted, resteemed, followed and added to my witnesses, keep it up!