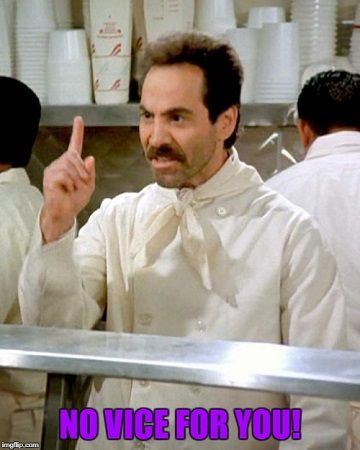 Previous readers of my blog will have seen my whitepaper review of VIT, or the "Vice Industry Token". To TLDR it for you, I demonstrated my relative lack of confidence in it with truly Shakespearean language.

The reason this was of interest to all Steem holders was the fact that VIT intended to air-drop (or grant for free) a large portion of their ICO tokens to holders of Steem Power (at a previous block number) at a future date. Vice first announced they would not be using SMTs, but would continue to reward Steem holders, and then later further clarified that they were cancelling the planned airdrop entirely and allocating those tokens back to their ICO as an additional bonus for purchases via Ethereum. This would be the part no-longer relevant.

At any rate, we now have no horse in this race and are free to speculate as to the reasons for this change. Conveniently, that's about all we can do, since we don't really know what is going on over there at the "world's premier adult blockchain."

As for the possible reasons Vice pulled out of their plans of using a Steem Smart Media Token rather than their own blockchain...let's speculate frivolously!

Vice simply realized the air-drop was pointless once they were not using SMTs.

As Vice correctly point out in their CM's Medium post, Vice really had no reason to support an air-drop to Steem Holders after they decided not to use the Steem blockchain or Smart Media Tokens. Reallocating these VIT tokens back to ICO contributors makes solid game-theoretical sense. Given how logical this explanation is, it's hard to hold any malice towards VIT for not randomly gifting hodl'ers of a now-totally-unrelated project with a large portion of their ICO.

However, this doesn't explain why Vice decided not to use SMTs...it simply explains the reason for the air-drop cancellation, after the fact.

Vice didn't want to wait, either because SMTs are delayed or because they got impatient, or have an antsy angel investor (such as Penthouse).

Vice may be privy to more information than we are. Perhaps SMT development has been delayed materially and, as a "future partner", they were privy to this reality. This might have caused them to expect to miss deadlines. Large backers such as Penthouse could have been breathing down their necks on certain non-public deadlines.

Vice could have any number of complaints about Steem, though none seem readily apparent. Perhaps competition from Dporn was a concern.

Vice thinks they can produce their own blockchain more cheaply than using Steem.

This seems an unlikely explanation, and as noted by @Exyle , they likely have a lot more work in front of them than they probably realize.

Good luck Vice. You're probably going to need it! (Although you've already raised way more Eth than I thought you would so, uh, that's good for you I guess.)

Would have been real nice to have a vice related steem related token! That's too bad

How much did it contribute to STEEM's recent devaluation?

You got a 100.00% upvote from @greengrowth thanks to @stimialiti! You too can use @GreenGrowth by sending your post URL in the memo field to the bot. Minimum bid is 0.01.

This comment has received a 32.26 % upvote from @steemdiffuser thanks to: @stimialiti. Steem on my friend!

After this I no longer have any trust in VICE. Too shady for me, never going to buy it.

Why representatives can not be happy with steam when steem includes good cryptocurrency.

Well... I have written about this 6 days ago, but you have far more readers than I do, so they will finally find it out from your article.

Ah, yes, we can't all be first to print but given I had written about it before an update seemed appropos...

It is not just about who posts first, I admire the fact that you were able to build such a large audience in time, so that when you make an important announce, you know that it will reach a lot of people. Congratulations for that!

It needs time to build an audience ;) tip!

Hi @mejustandrew! You have received 0.1 SBD tip from @cardboard!

Oh damn, I was very happy about the whole partnership, this would have been a huge jump for Steem platform but now it's all gone, hope Steem will bring some new big players on the table.
Btw, are SMT's fully released? If not, when that will happen? Regards! :)

SMTs are still waiting a release date. We were previously told an update by "probably around March", which was supposed to be launch IIRC.

Well, that was disappointing. I really don't know what they are thinking when they decide to not use SMT. Though, they are free to do whatever they like with their platform. I feel like they just let go of a great opportunity by excluding Steemit. I guess it means there is no VICE for me. Thanks for the informing us of this changes @lexiconical.

This is a shame but I was always a bit dubious about Vice because SMTs aren't here yet. Hopefully when SMTs are up and running, we can get some airdrops.

thanks for the update
I was actually waiting for the airdrop of vice for steem power holders. but its ok and your explanations are quite germane.
does it mean the smt is delayed if so for how long. what of the next fork?
if so, seems this low steem price may be lasting longer as presumed because smt and next fork are tools to boost up morales and prices
thanks for sharing

Look forward to how this plays out

Good content and an interesting read. Thank you for sharing.

Top shelf info for sure.