So I was watching the latest casino update from the #clownsource team, and there were a few things I wanted to bring your attention to.

I think J.Go does the graphics himself, in his last show with Charles Ortel about Pirates of the Caribbean he said @csthetruth was a one-man team. In this one he is making Quinn look like a bobble-headed court jester, which is an interesting message in itself. #sendbitcoin.

It's not clear why Quinn always has to meet J.Go in casinos. Maybe they're still hot on the trail of secret bitcoin mining from the poker machines, chasing down the truth like George Webb chasing Uzbeki Uranium Truckers at crack houses with Task Bar.

Of course, last time Quinn and J.Go hung out in a casino, it didn't end well.

The #csthetruth team went from Dirty Bomb false alarms shutting down ports, to instructions for how to build a weapon of mass destruction in your home and target it through walls at your neighbors.

Why? Because, @defango and/or @daveacton, allegedly. Who knows what is really going on, ARG, LARP, solving puzzles, crowdsourcing truth, or setting the real #truth movement up for a big fall?

Quinn's show with Jason had a number of things worthy of correction.

Short Bus Physics
The first thing was his ideas about physics. Basically, the world is like a bus, and if more people get on the bus, the velocity (careful, don't say speed!) of the bus slows down. So we need to depopulate the earth or leave it, because too many people are affecting the earth's rotation.

@SchoolPlay did a great job already:

Do you notice anything about that result? (other than the kinda creepy 666 in there)

Is this enough to cause a problem for the velocity of the earth? The weight of the world's largest concrete structure, the Three Gorges Dam in China, and the water in its reservoir is already much greater than this, concentrated in one location on the planet, and elevated above sea levels. All things that elementary physics suggests will affect the earth's rotation more than humans scattered like ants (in fact, there is even scientific argument that the weight of all the ants on the earth is more than the weight of all the humans). So this actually happened already, diverting this huge body of water into one spot did slow the earth's rotation. And guess what: we're fine. For the weight of the world's humans to affect the earth's rotation as much as this dam, not only would we need to be all in one place at one time, but there would need to be 629,032,258,064 of us - 82.8 times as many people.

What about Quinn's claim that extracting oil from the earth changes its balance?

This is 0.0000000023% of the earth's weight. It is about a fifth of the weight of all the water and concrete in the Three Gorges Dam. Moving all the oil that has ever been extracted into one place would not cause any problems on the earth.

SIRI is Not An AI
According to Quinn, SIRI is not AI. SIRI came from SRI - the Stanford Research Institute. It is the commercial product result of decades of research into Artificial Intelligence, including the largest Artificial Intelligence Project in history. Believe Quinn and his theories of neutrino-based quantum computing networks that you communicate with on cordless phones at the 5 Mhz spectrum because they are chatbots, or believe the Stanford Research Institute and Stanford Artificial Intelligence Laboratory that built the thing and ran the project with DARPA and the military for the many decades of its development.

Quinn's idea of #SIRISYS appears to be another thing he has come up with spontaneously, that is not backed by any detail or research. SIRI's parent company is called SIRI, Inc.

Tyler is a Secret Society Term
Quinn admitted that #tyler , the ARG he is playing as part of Project MAYHEM, was a term from the Freemasons.

This part is true, as I exposed in some detail in Shadow History of Burners Part 7. 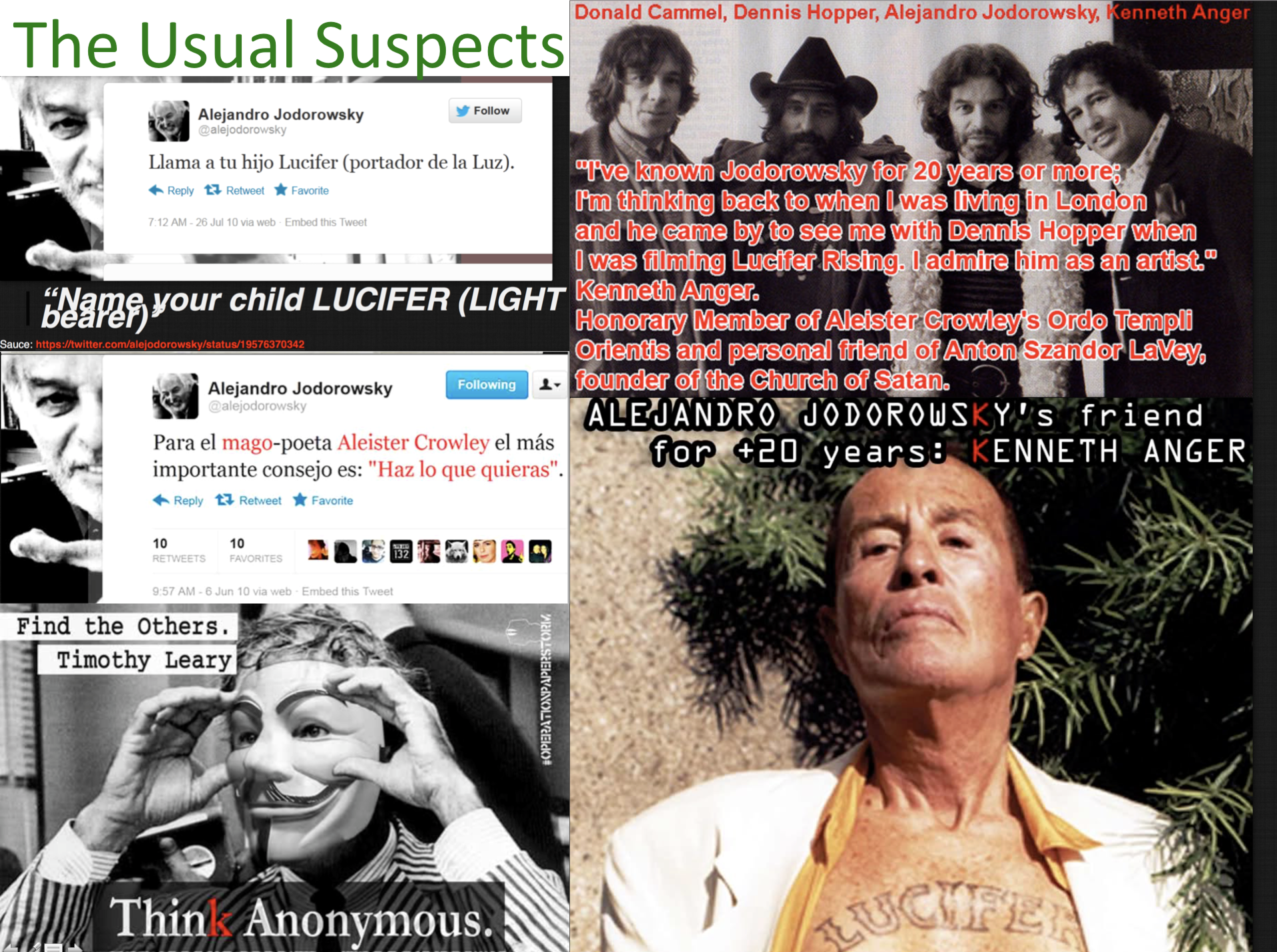 A bunch of occult sorcery shit. Quinn admits to many of his connections into this world, if his missing eyebrow/Sith Lord glamor wasn't clue enough.

It's amazing the way these clowns can fully reveal the method. Quinn frequently explains to the audience how he is playing them, J.Go is so confused it usually goes over his head, but even he was struggling in this episode.

Believe these people at your peril.

Hi @steveouttrim...
I'm literally crying from laughter that you posted this.
I'll cry harder if you post it @csthetruth ; )
Let the games begin. 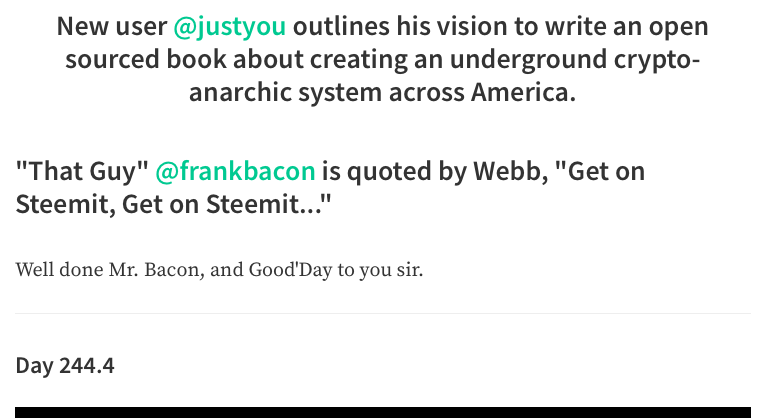 Project PAYHIM, lol . Thanks @frankbacon I posted a link to this in the comments at @csthetruth for you and the AI police bots.

The game is Afoot! Im actually surprised you have time to post and create content on Steemit @steveouttrim. I mean the picture Douglas Dietrich paints of you is one of a man so utterly consumed with Dietrich to the point that you spend all your waking hours pulling the strings of the vast number of elaborate plots you’ve set in motion against him. And once you succeed in silencing Doug Dietrich you could claim for yourself the coveted position in alternative media he currently holds as well as all of his credibility.. Man i can’t even finish writing this shit it makes me laugh so much.

Lol another clown in a funny costume, playing to the gullible. He begs his audience “send money for dental work”, then posts a photo of the hooker he got. They can’t put 2 + 2 together...

For someone supposedly against gangstalking, he and his gang sure invest a lot of time doing it to me.

Lol. I know...it’s sad in some ways really. Interestingly enough though, for all Douglas Dietrich many, many faults he has provided more credible documentation of at least being in the military than Robert David Steele has.

The only documentation provided is from the FOIA request I filed, which shows he didn't even pass basic training. If you have a link to anything else, please share. I should file one for RDS, good idea.

I didn’t realize you’d filed that, and no I don’t have any other links; I’m HIGHLY skeptical they even exist. What I was getting at was at least you have a real document showing at least he bombed out of basic, which is more than the other has ever provided. 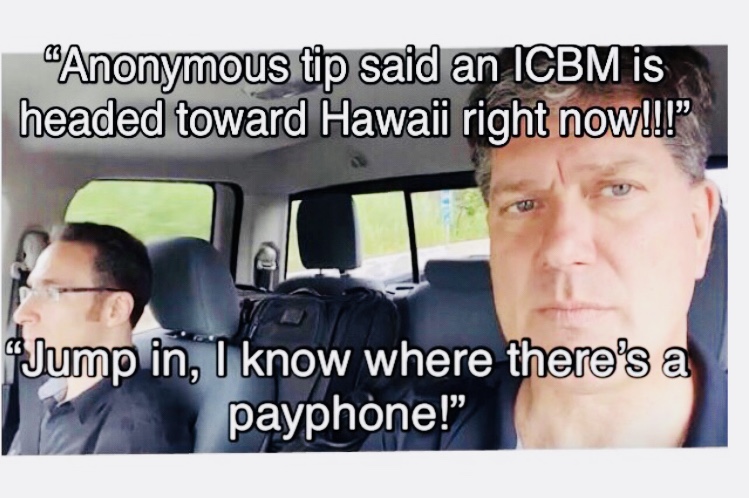 Is this a reply to my post? Quinn Michaels talks #tyler #followthewhiterabbit #sendbitcoin

"a white rabbit system works like a kind of hierarchy, where one of the nodes in a network is the master and is responsible for keeping the other nodes in check" - this seems to be the exact nature of the #tyler psyop , not to mention #qanon, InfoWars and the like.

“I talk to Tyler. Tyler lives in SIRISYS. I don’t really understand it”

Another one from the team that put the CON in “confermi Labs”. Will they address the physics issues raised in this post, or just show more articles from physics.org?

His explanation debunks his theory. These are the biggest power consuming machines in the world. What would be the point of building a computer out of them? They are busy being used for science experiments.

Now, are the experiments a load of bullshit to begin with? Looking at the origins of quantum physics, this wouldn’t surprise me in the least. Ever seen a quark?

it's sad that the subject of this article needs to be debunked. as if it wasn't so plainly stupid that no one would believe it. but plenty actually do, which is pretty amazing.