Beginnings of a Digital Nomad: The Remote Year - Day 134

“Your mind is your instrument. Learn to be its master and not its slave.” --Remez Sasson. November 1st, 2017 - Day 134
(Scroll down to skip ahead for an exciting ICO review you Steemians will LOVE!)

One week into a 6-month stint here in Bangkok, which I find pulling me back into its tight grasp several times per year (and my second visit since selling all my belongings to live a nomadic lifestyle & starting this blog series). 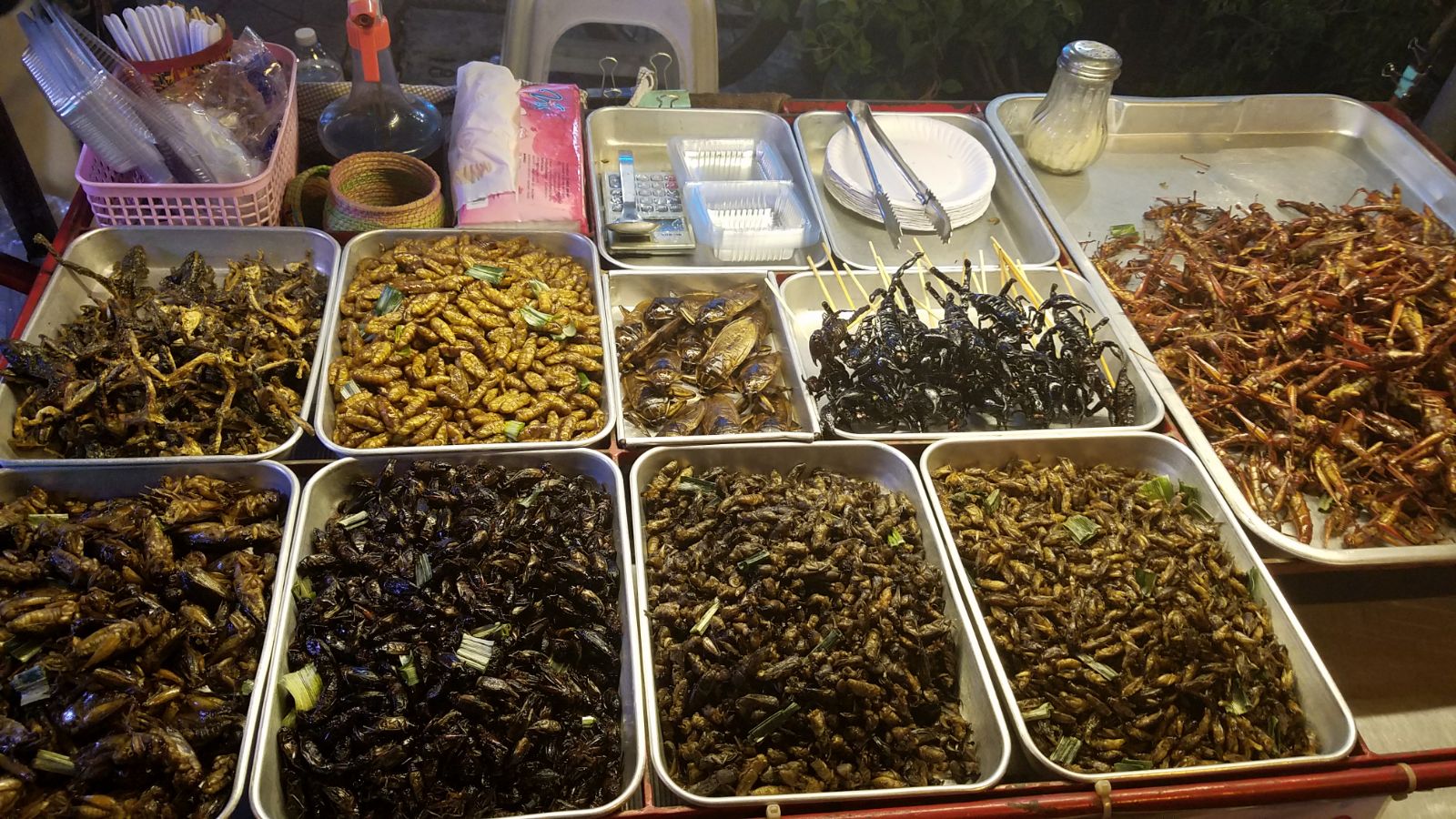 Fried bugs (maggots, cockroaches, grasshoppers, scorpions, & more) for sale to be consumed by those who dare!

This 8,000,000-person-dense city is not only home to Buddhist temples, street food carts, & bustling markets, but also a strong, ever-growing cryptocommunity as well...I want in on it. With my Sigma Alpha Epsilon fraternity brothers praying at a local temple. 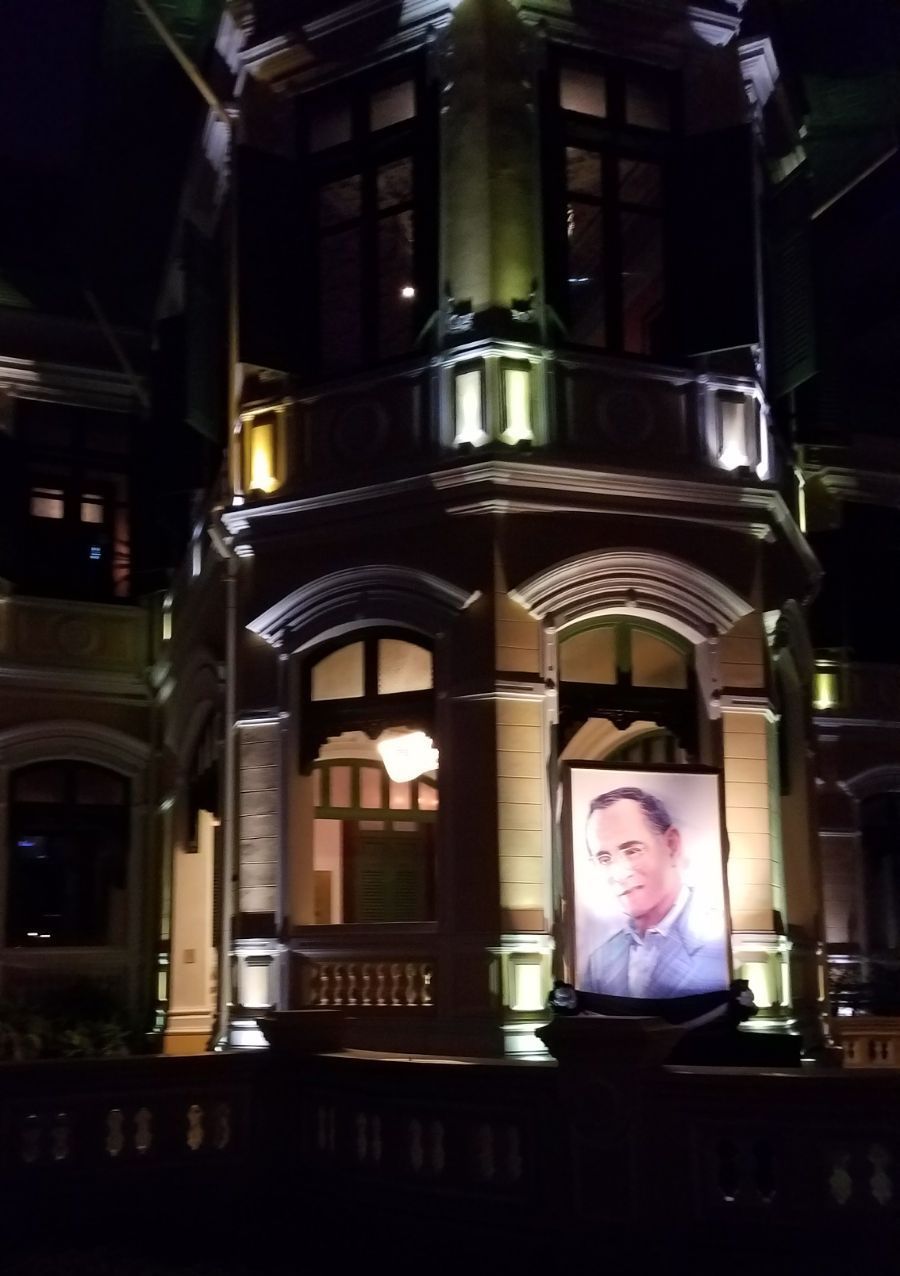 Initial days upon arrival were marked by an overall air of grief, as the country was ending its one-year mourning period over the death of King Bhumibol Adulyadej. What were normally busy, bustling streets were left empty over a two-day period as locals & foreigners alike flocked to the nearest temples to pay respects to their beloved former leader. Black-clad swarms of people spilled out of their local temples, with lines reaching unimaginable distances as participants baked in the sticky Thai humidity for hours on end.

This mourning period--as well as inner personal struggles I was wrestling with--reminded me of the soul's imperative dependence on a simple, yet crucial factor: mindset. It's during these times of grief that one's character is put to the ultimate test; stretching their resilience & strength beyond limits they could have never perceived possible. People dressed in black waiting in line for hours on end to pay respects to the late King Bhumipol Adulyadej.

One simple, yet effective strategy of improving one's mindset is meditation. It comes in several forms (i.e., breathing exercises, active meditation, yoga, etc.), yet do worlds to improve your emotional well-being by regulating your mood as well as decreasing depression, anxiety, stress, etc. 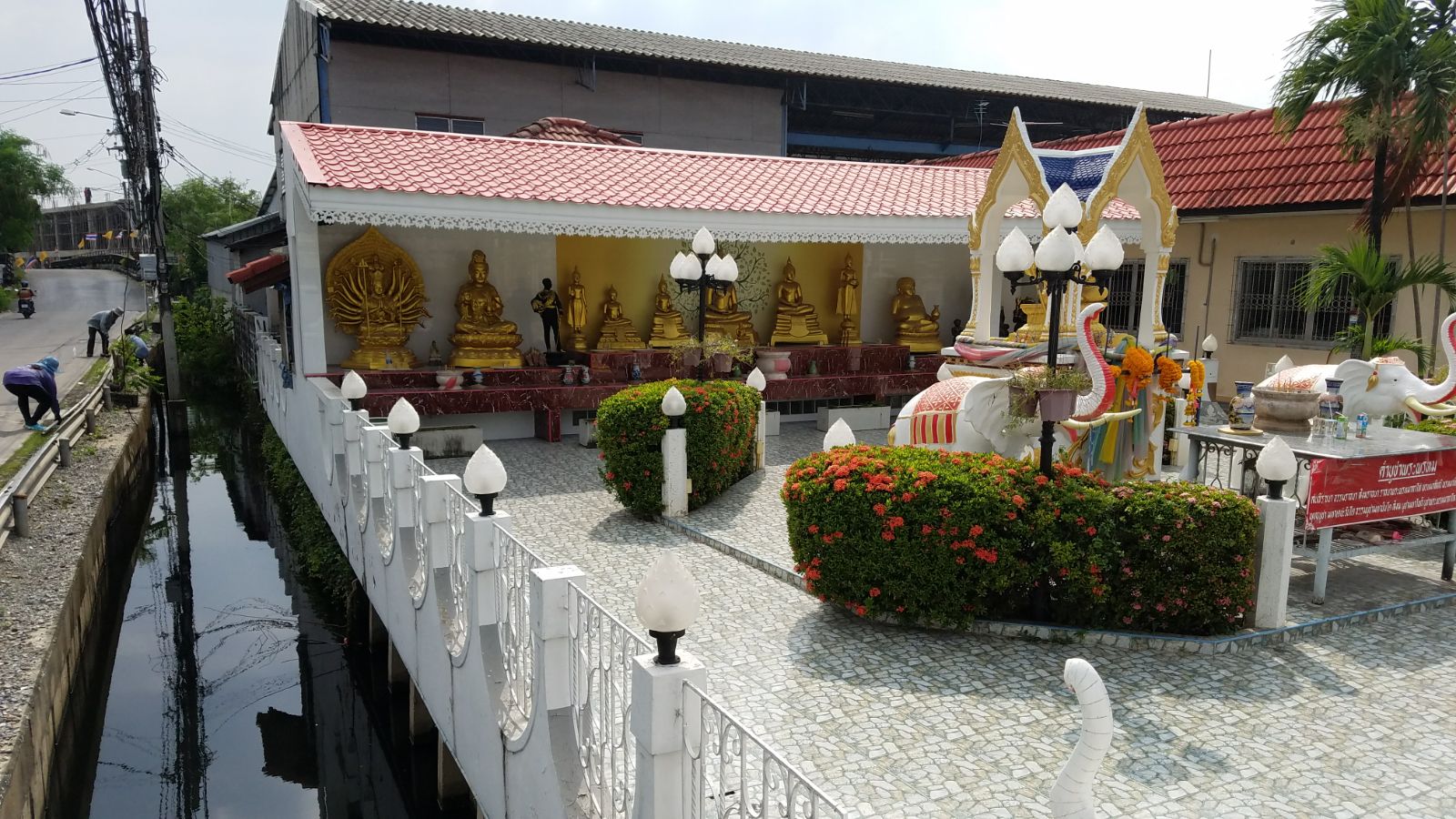 The benefits go on & on, and thousands of books have been written on the subject matter. Yet what I know is that meditation (and the practice of mindfulness) is a common practice among Thai culture...and understandably so, as was demonstrated by the resilience shown by its people during their king's death.

Isolation/Solitude
It's strange waking up at random times of the day/night, when most people are either deep asleep or already halfway through their day. Such a lifestyle can make even the most crowded of cities like Bangkok seem lonely at times. Freedom + jetlag will do that to you. 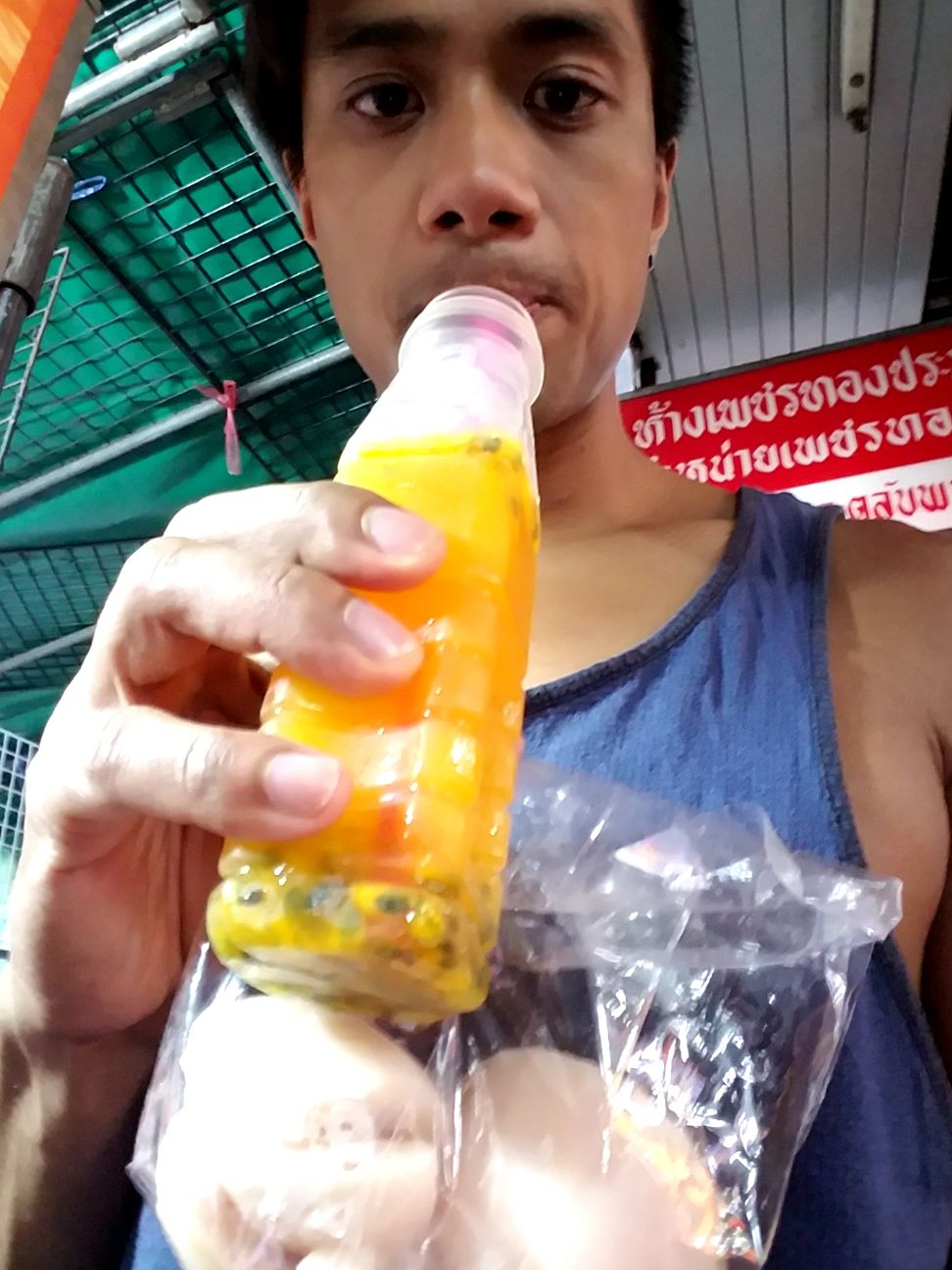 With all the debate over whether the glass is half full or half empty, all I can say is this: "Don't worry about always making the best decision, just make the best out of the decision you've made."--a very close friend of mine whom I hold near & dear to my heart #mindset.

That said, I see this isolation as an opportunity to escape into solitude (something that's not easy to come by when you bear the responsibility of holding others' livelihoods in your hands).

Doing so improves overall concentration, productivity, & creativity by allowing you/your brain to engage in deep thought. Additionally, it puts you more in touch with your inner voice & desires, thus allowing you to further discover yourself & improve your relationships with others (although the latter may seem like an ironic paradox). Veering away from the mental world to return to the real & digital worlds--and in response to all the positive feedback received from my recent ICOs post, I'd like to take this opportunity to fill the Steemit community in on a couple more promising ICOs! 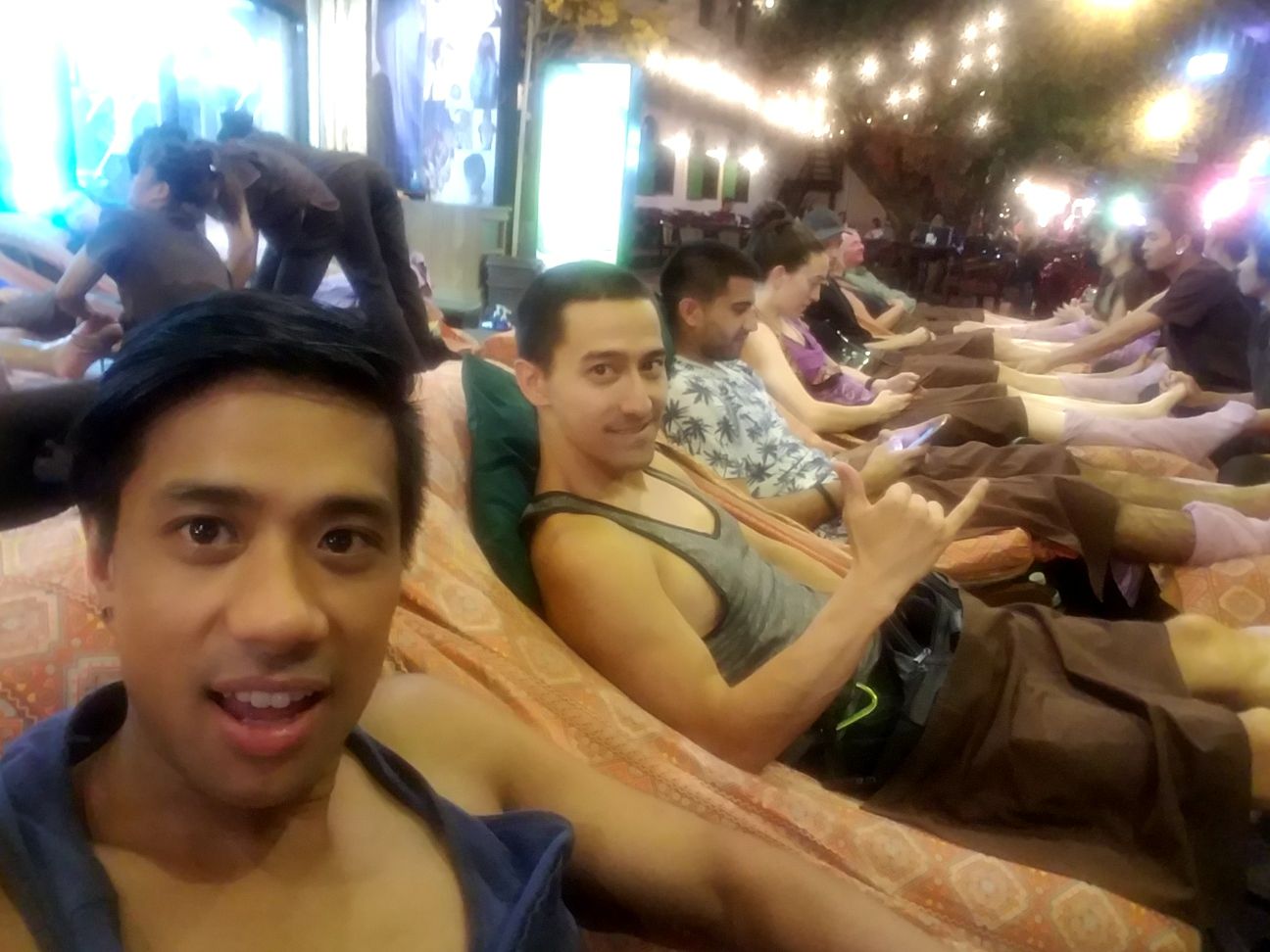 I’m excited to present to the Steemit community Datum: a promising new ICO that--up until this point--I believe is the most applicable & relevant to this platform’s users...and I’m even more excited to get in on it myself :) Don’t miss out on the party because--in similar fashion to Steemit in the social media world--there’s no reason you shouldn’t be monetizing on something that you’re already (and oftentimes unknowingly) doing for free: giving up your data.

Some of the top reasons we’re here on Steemit is because 1) we can personally choose how much personal information we want to share with the world based on our preferred levels of privacy, 2) we’re not being spammed by pesky ads that detract from the overall experience (like on Facebook, Instagram, & Twitter), and 3) it provides monetary rewards you’re unable to earn on other social media platforms.

Datum is providing the solution to all of that!

Current online media giants (i.e., Google, Facebook, Twitter, etc.) provide their services for free in exchange for one VERY important asset: data. From age, gender, & nationality down to the micro levels of food preferences & commuting habits, they know EVERYTHING! That’s what makes them such a valuable tool to advertisers & marketers alike. 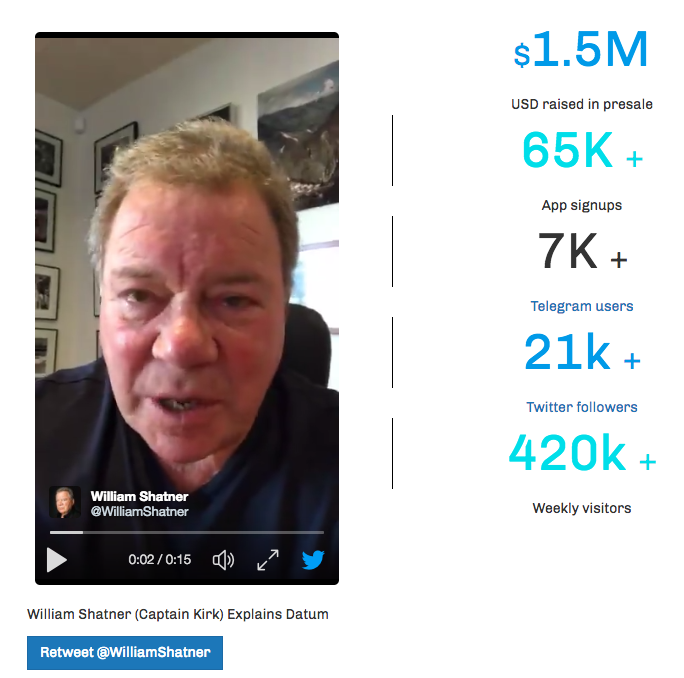 William Shatner (aka "Captain Kirk" on Star Trek) showing his support for Datum!

Instead of giving away your personal data away for free, Datum allows you to upload this information to their platform to, in turn, be encrypted & stored in a secure manner. Advertisers, businesses, etc. looking to access this information for their marketing campaigns can then pay a fee (in DAT = Datum’s native token) in exchange for your anonymized data. The DAT tokens are then transferred to you as a reward for sharing your data, while this same data is made available to the advertiser. This entire transaction process is executed seamlessly through the use of smart contracts.

If that’s not enough to convince you, then maybe the hype will. Their public token sale just recently started at the time of this writing & according to their website (whose figures are constantly being updated in realtime) they’ve already sold over a third of their available supply, with $1.5 million raised in their presale alone & over 13,776 ETH (about $4,000,000) total! Get your spacesuits ready because the Datum rocket is taking off soon...direction: MOON!

Thanks again to everyone who took time out of their busy day to read this post! Your support means the world to me & I hope I was able to provide even the slightest amount of value to you & the Steemit community! The @OriginalWorks bot has determined this post by @theywillkillyou to be original material and upvoted(2%) it!

That looks so really great :)
i would love to visit Bangkok once.
i hope you enjoy stay, namaste.

Great post!! I am still completely lost trying to understand cryptocurrency but I feel a little less lost after reading :)

Thank you so much for your kind words! I'm very glad to hear you enjoy them & I'll keep doing my best to offer as much value to this community as possible :)

great post, very inspiring! very proud on how you live your life! great work you pun in to.
Resteemed!

Thanks my brother, I hope you can come join me here in Thailand sometime soon! Perhaps with Abel too when he can break free from the motherly nurturing/babysitting of his gf ;) Hahahahaha

haha no comment! young love such a beautifull thing, now the whole blockchain knows.
No happy for him! talks soon hope to indeed see you there, fun that @offoodandart is coming to Amsterdam in spring

Thank you @theywillkillyou for sharing this to the community. Your thoughts and advice are invaluable

Thank you @pandamama! Your support is always so very appreciated!! I hope things are going well with you & @deimus over in Cyprus :)

Congratulations @theywillkillyou! You have completed some achievement on Steemit and have been rewarded with new badge(s) :

Very nice article, I really respect this lifestyle in some years I will join join you as a digital nomad;), I will check out the icos you mentioned datum sounds really interesting.

Thanks, I'm rooting for you to join me ASAP! Best of luck with your endeavors & just remember to not just stay focused on the end goal, but also enjoy the process of getting there :)