Visiting the ancient temples of Ayutthaya in Thailand

Ayutthaya is the former capital of Phra Nakhon Si Ayutthaya province in Thailand. The city is named after the city of Ayodhya in India. The Fine Arts Department of Thailand reports that Ayutthaya was founded in 1351 by King U Thong, who made it the capital of his kingdom. That way it became the second Siamese capital after the city Sukhothai. Estimations say that Ayutthaya must have been a large city, reaching around 300.000 people around the year 1600 and possibly around one million around the year 1700. If that’s true it was one of the biggest cities at that time. 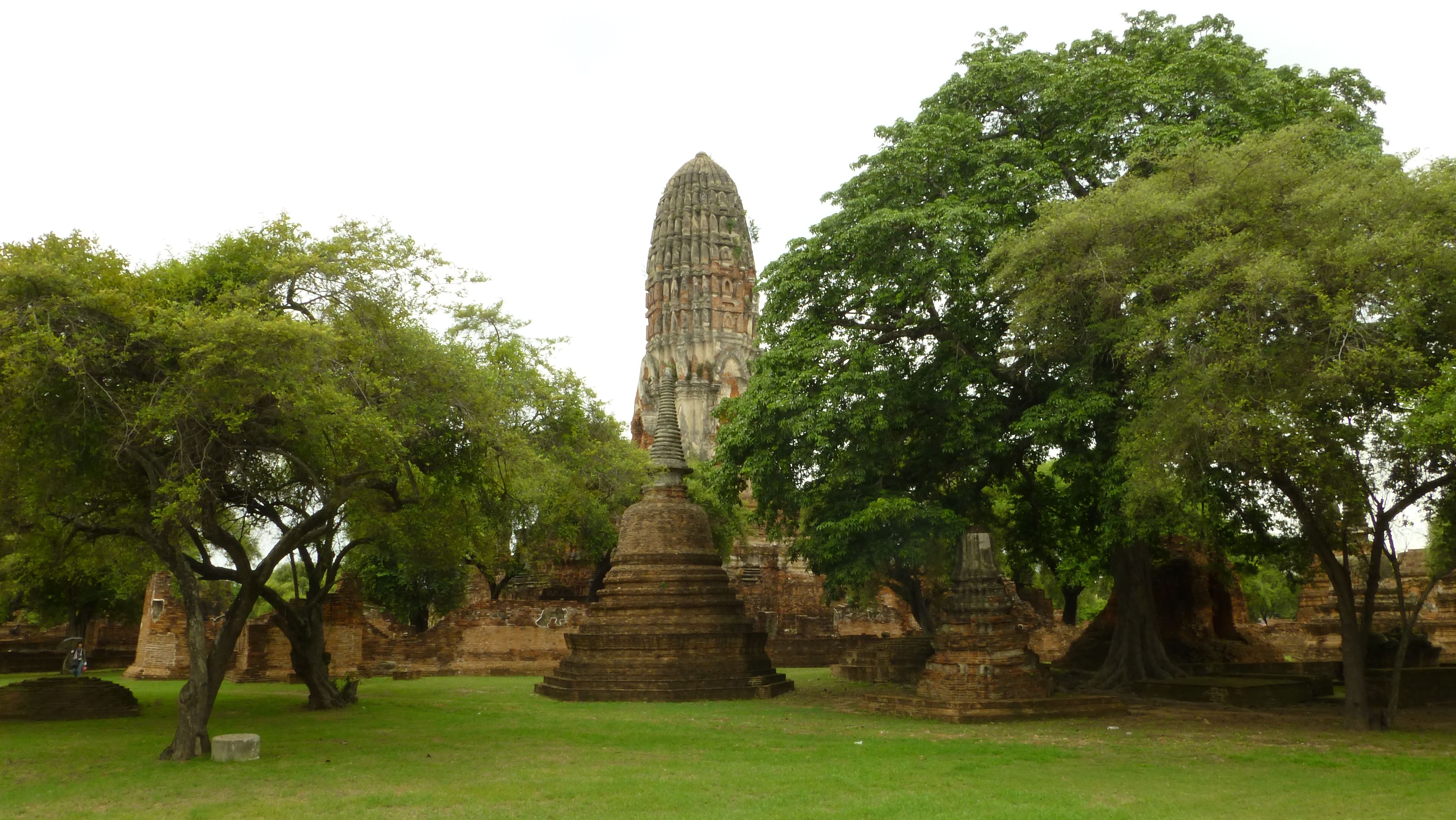 The city was destroyed in the year 1767 by the Burmese army. This resulted in the collapse of the kingdom. You can still find the ruins of the kingdom in the form of many temples if you visit this modern city of Ayutthaya which is located near the old city.

It’s very easy to get there. When my girlfriend and I were traveling in Thailand a few years back we thought about visiting this place on our way north to Chiang Mai. But in the end we figured out it was way easier to just do a trip from Bangkok. With this blog I want to share some details of our trip to Ayutthaya. In that time I did not had a DSLR camera yet so the photos in here maybe a bit lower of quality I usually post.

When in Bangkok we just went to the Democracy Monument and there were loads of shuttle busses waiting for people to bring them to any place in Thailand. We picked one and in one and a half hour we arrived in Ayutthay. The old city is a pretty big area with temples scattered all over the place. At the drop off point there were tuk-tuks and cabs waiting for us, but after a quick talk it was pretty clear they were charging way too much. So we grabbed our Lonely Planet and searched for a bike shop. We’ve read that you can easily discover the place by bike and luckily that day it was a bit cloudy so no too hot. So the bikes were a good choice. We didn’t feel like riding around on a screaming 2-stroke engine all day anyway. 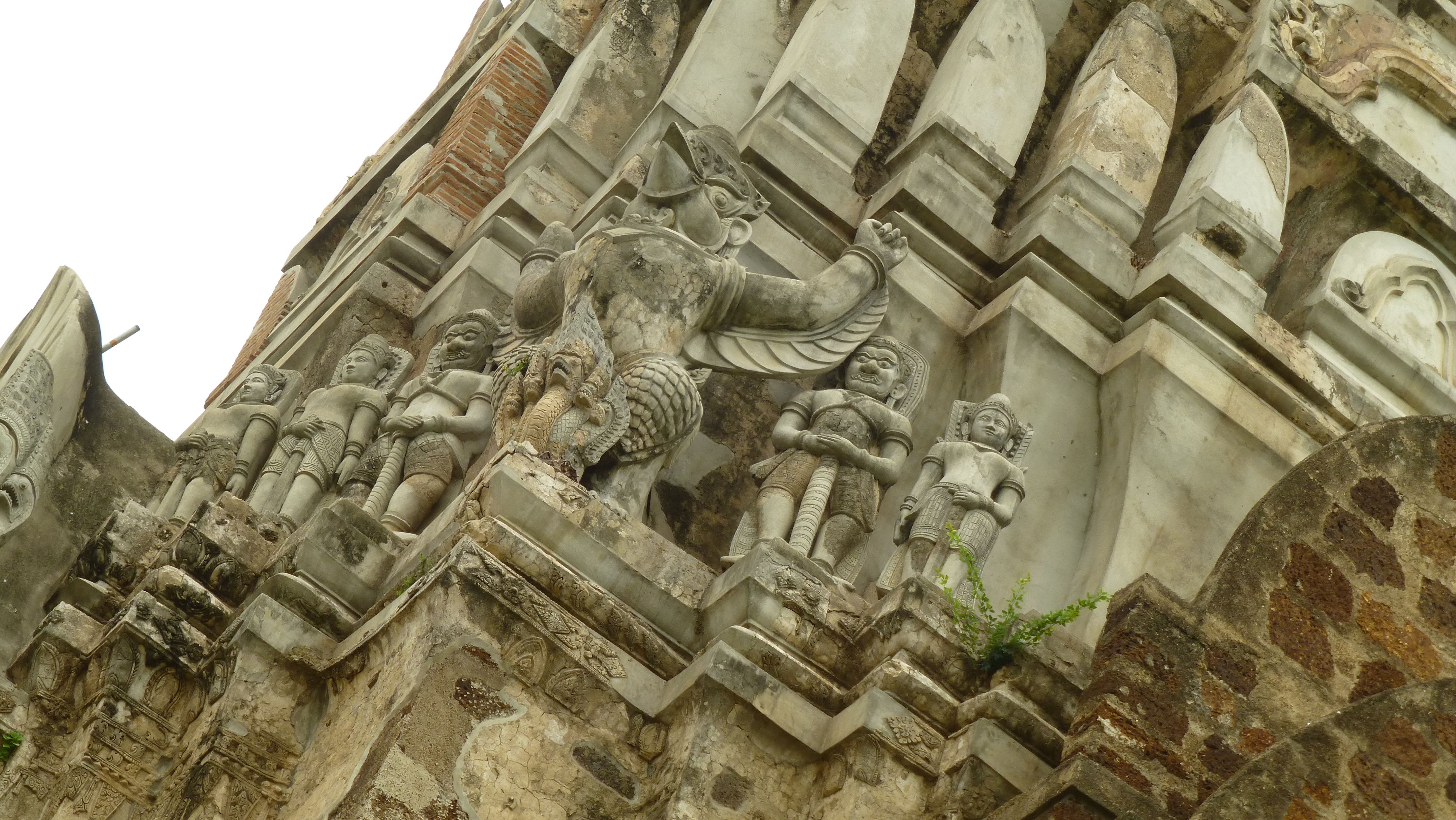 It’s pretty fun to bike because as I mentioned before, the temples are scattered all around the city and are nowadays surrounded by houses and other buildings. So it’s not that you’re biking around in a deserted area with some temples. The temples are very different and some require a small entry fee, but most of them are free to visit. The most famous temple is Wat Chai Watthanaram. This Buddhist temple is built in the year 1630 and was the first temple of the reign. The temple is 35 meters high.

Another iconic image you can find at Ayutthay is the Buddha head in tree roots at Wat Mahathat. Nobody really knows how the head became entwined with the roots, but a possible explanation is that the tree just grew around it during the period after the Burmese army destroyed the place, when the places was abandoned. We biked around the place all day. It was really interesting with the history and everything and because the area is quite big, it’s not so crowded at most temples. Alternatively from biking (and a tuk-tuk) you can also do a boat tour over the Chao Phraya River from where you can also see a lot of temples. In historical perspective I would definitely recommend visiting either Ayutthay or Sukhothai. Sukhothai is pretty comparable with Ayutthay. But were in Ayutthay the temples are mostly ruined by the Burmese army and treasurhunters, the temples in Sukhothai are well conserved. But we’ve not been there, so I can’t tell much about it. 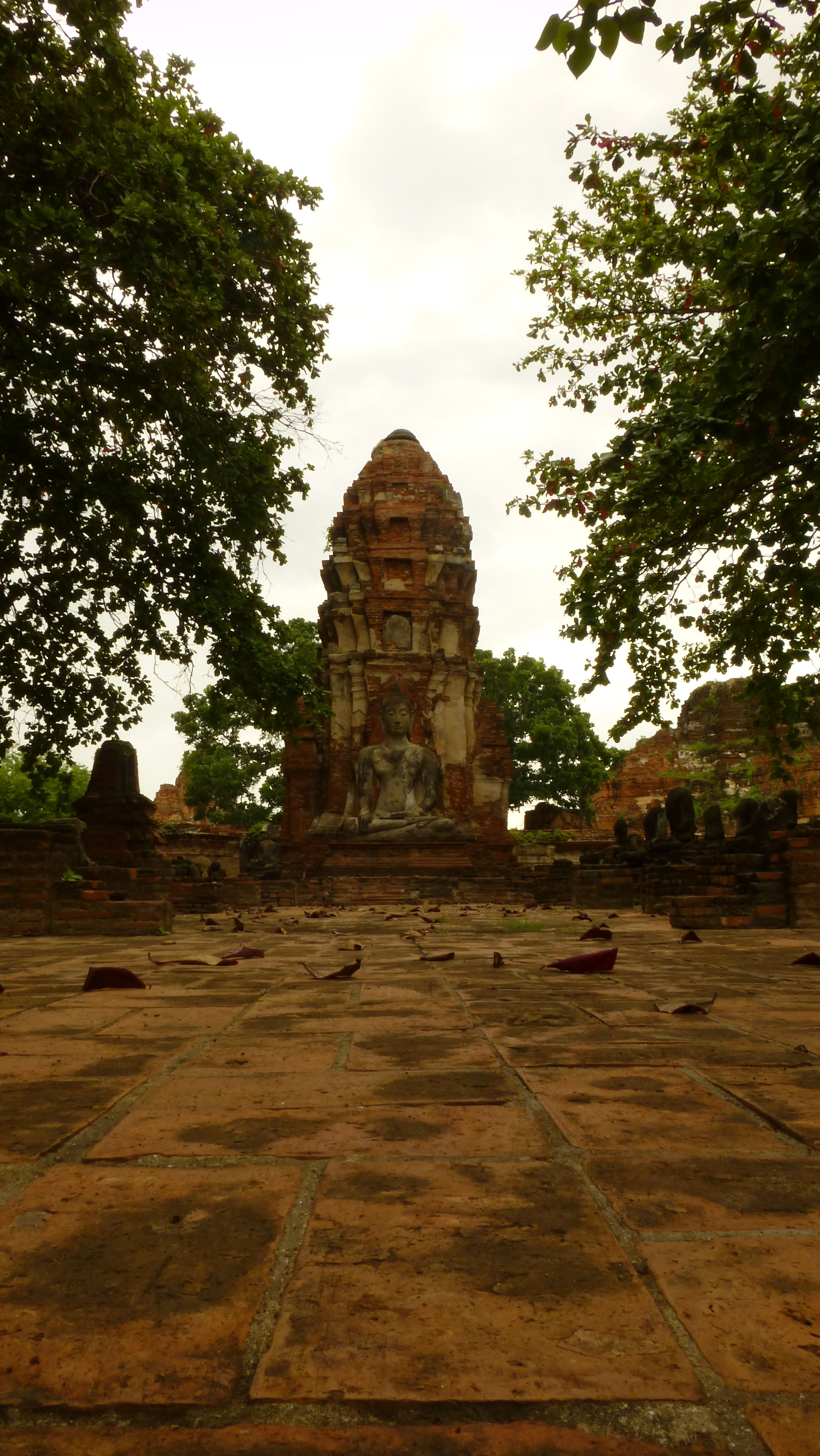 If you enjoyed my post please consider upvoting my work and feel free to follow me for more travel and photography related blogs!

If you’re interested in any of my previous work, feel free to check it out:

Great to see the story of historical park with old temples in Ayutthaya being published on Steem Community. Thanks @steef-05 to shout out to the world of my beloved country. Have a great day and Cheers. :-)

Glad you liked it! I loved Thailand. Where in the country do you live?

@steef-05 - I was born in Thailand but love to travel around and explore. Now I am in ShenZhen, China and Philippines is my next post.

And yet another strong post by you! When I was in Thailand, I didn't go to Ayutthaya, now seeing your post I kind of regret it, haha!

Thanks for spotting my blog! You can always go back ;)

awesome temple n frnd am searching for people who have 100 sp for deligation if u like deligate me i will give u in return 1$ in 10 days 0.100 for pr day if u like this deligation reply onece .

This post was resteemed by @steemvote and received a 36.24% Upvote

Hello Stephan,
A truly brilliant post! - What incredible history, it is very interesting that this may have been one of the biggest cities at that time. Their spirituality and technology must have been immensely rich before it was so damaged by invaders.
I am very interested in the work of Graham Hancock and Newearth youtube channel in this area of research.

Following you now for more - Upvoted and resteemed :D

Thanks a lot! Some places are indeed truly fascinating. I’ll be sure to check out the youtube channel. Really appreciate the follow and resteem.

great memories.. i have been there 3 years before and made nearly the same pictures ;)

Haha yeah I guess you, me and a few thousand others ;) Did you enjoy it?