Hello and welcome to part 2 of my blog about our travel itinerary in Vietnam.

If you want to read about our first 2 weeks of the trip, you can find it Here. This blog is about the last 2 weeks which we spend in Hanoi, Ha Long Bay, Sa Pa and Ha Giang. 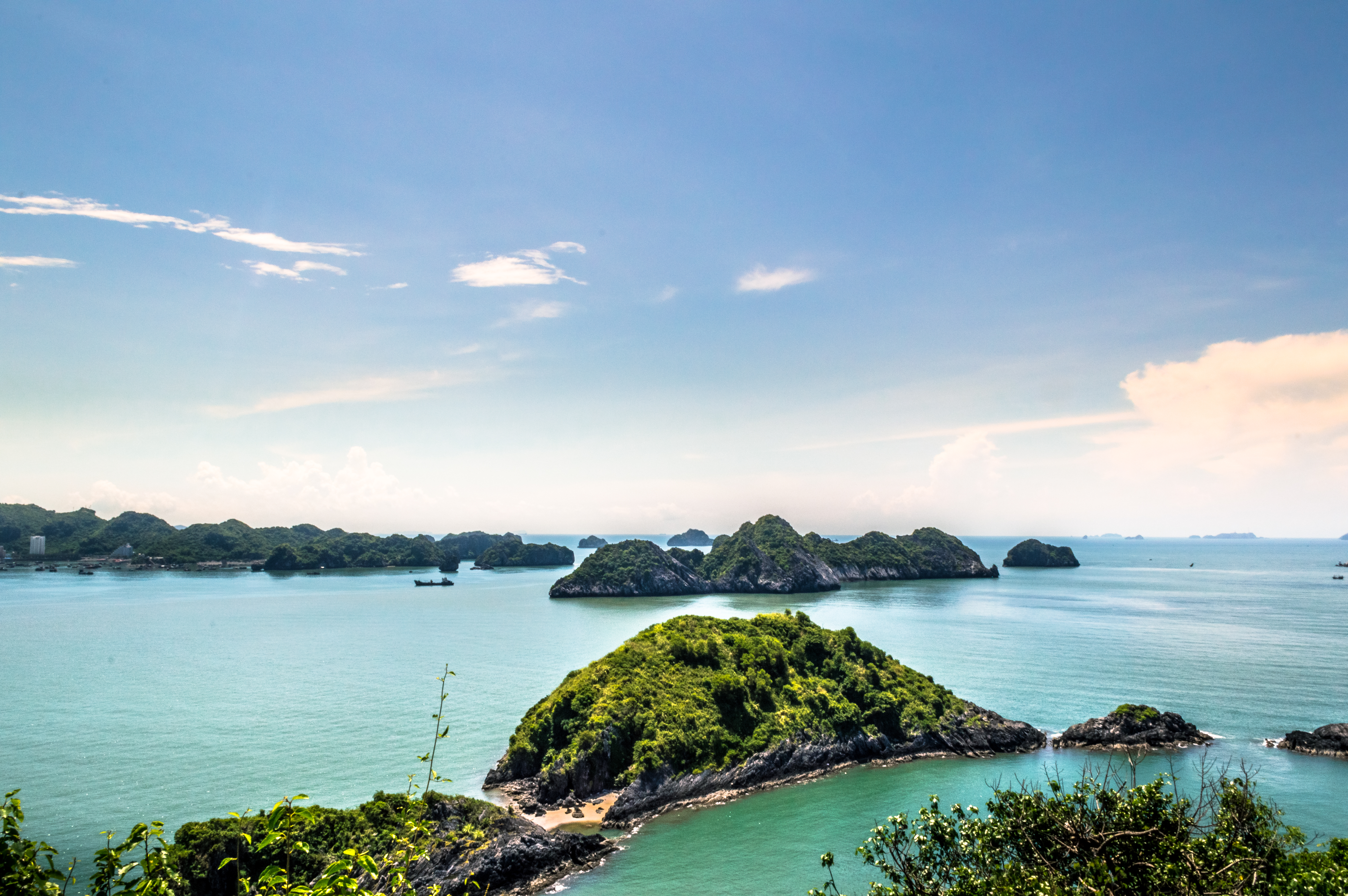 Our route throught the country

Week 3
In Hanoi we would meet up with a friend. We arrived a day before so we explored the city a bit in advance. Since Da Lat the weather was cooler and in Hoi An there was some breeze from the sea. But back in the big city, it was back to hot weather again. We walked a bit through the old quarter of Hanoi and around the Hoan Kiem Lake to get used to it again. Hanoi Old Quarter has a lot to offer if you’re looking for souvenirs or cheap/fake stuff. The whole quarter literally exists out of shops. They cover the whole sidewalks. In the afternoon we took a local bus to the airport. It drove through all the small (suburban) villages around Hanoi on its way to the airport. Quite funny to see but the ride was also very bumpy. After we picked up our friend from the airport we took the express version of the bus directly back to town. Way faster and smoother. 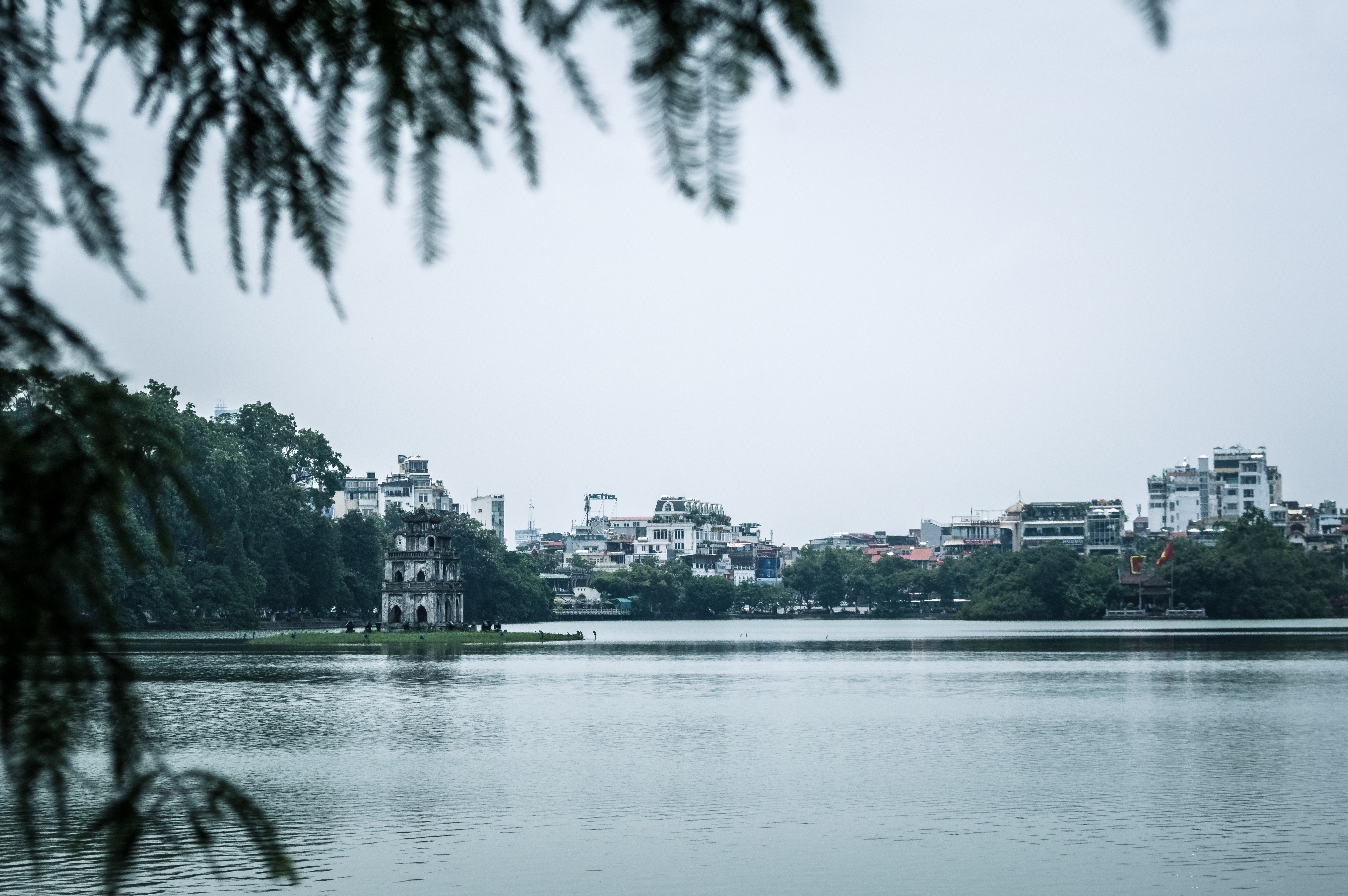 Back in the old quarter we started looking for a bar. Some places brew their own beer and Hanoi is pretty known for it because the home-brewed stuff is usually extremely cheap. The next day we did another walking tour through the city. This time we also visited the Hoa Lò Prison, also known as Hanoi Hilton. First used by the French for political prisoners, later by North Vietnam for captured US prisoners of war. The prison was demolished during the 1990s, but you can still visit the gatehouse that is now being used as a museum. Just like the War Remnants Museum in HCMH it’s a very interesting museum, but the fact again remains that it is hard to determine how objective all the information is.

Later that day we booked a we booked a trip to Ha Long Bay. Actually the trip we booked was more through Lan Ha Bay, almost all the way around Cat Ba Island. This area is way more quiet than Ha Long Bay, where the tour operators may only operate on a small piece of the bay. We booked a 3 day 2 night cocktail cruise. In the morning a bus brought us to the ferry at Hai Phong, which brought us to the boat. The trip contained a nice cruise through the bay, some kayaking and 2 nights on a ‘private’ island called Cat Ba. On the island we did 2 trekking’s and on the last day we also did a trekking on Cat Ba island. Both trekking’s offer amazing views. It’s a good tour that has a good value for money. A lot of people did the 2 days 1 night version, but in my opinion that would be a bit of waste of your money. The accommodation is basic but the food and the guide were really good. Drinks are not included.

Shot from the cruise 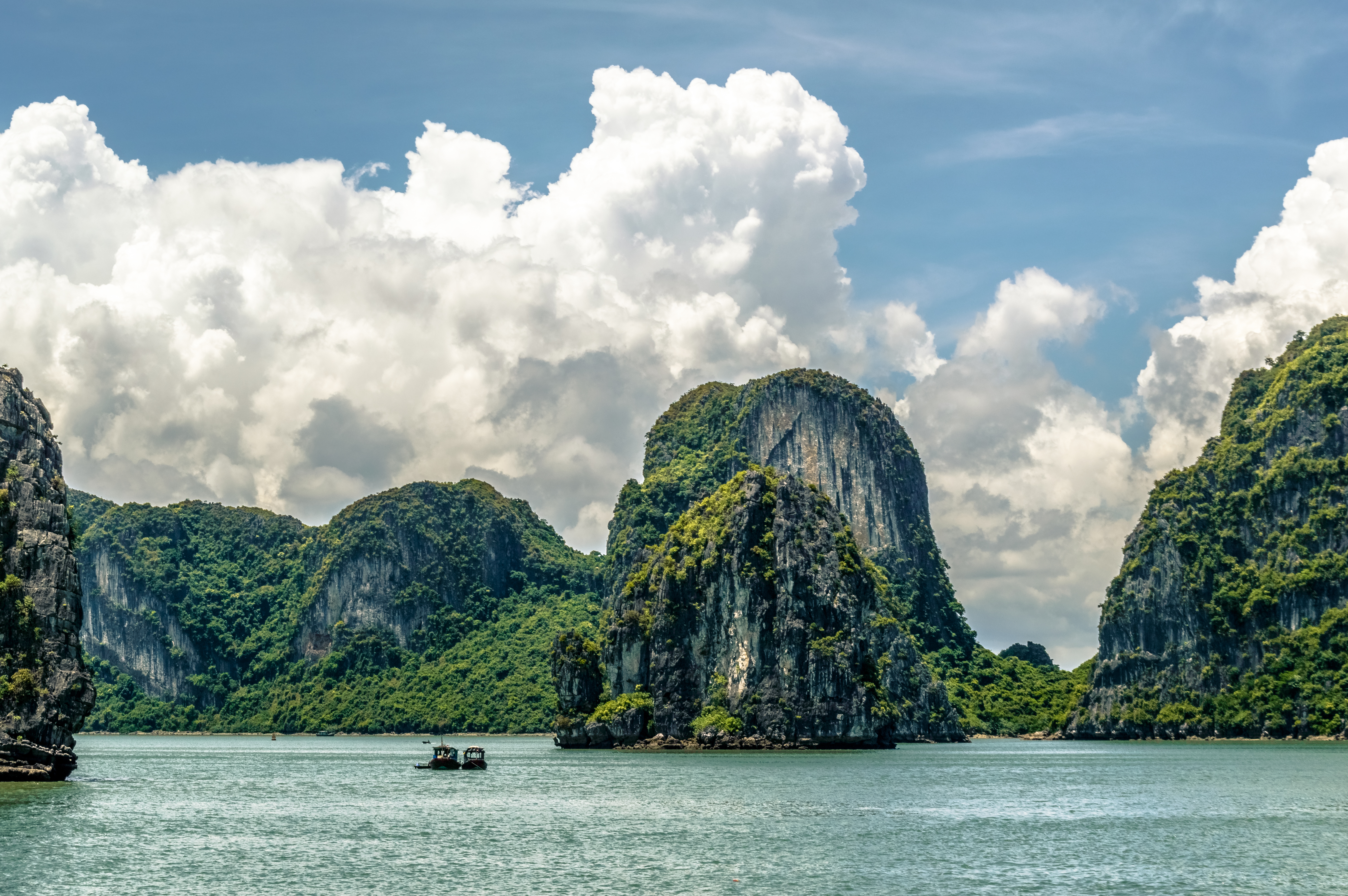 Shot from the cruise

After the Ha Long Bay trip we were brought back to Hanoi where we took a night train to Lao Cai to visit the Sa Pa province. We stayed in a small town called Ta Van where we did a trekking and attended a cooking class. Week 4
The last week we went all the way up north. I made a blog about this part of Vietnam (and Sa Pa) earlier. You can find it here. This part of Vietnam was really beautiful. Very remote and almost not tourists yet. The Dong Van Karst Plateau Geopark in the Ha Giang province is an amazing piece of nature. In this province we did a round tour for a few days. After this tour we went back to Hanoi again by bus.

Back in Hanoi we did some shopping for souvenirs and ate at some places the tour operator from the Ha Long Bay trip recommended to us. They turned out to be some pretty good recommendations. On the last day we also visited the Ho Chi Minh Mausoleum and the Temple of Literature in Hanoi. The temple hosts Vietnam's first national university. It’s built in 1070 and is one of several temples in Vietnam which is dedicated to Confucius, sages and scholars. It has multiple courtyards and an altar. The Mausoleum is the last resting place of Ho Chi Minh. You can only visit it on specific days and only in the morning. For 2 months in a year the body is send to Russia for maintenance, so before you go you should check if it’s possible. Prepare to queue for some time in the heat and don’t forget to dress properly (at least something that covers your shoulders and arms). Entering the building is in a structured queue 2 people wide. You might be lucky to see a ceremonial change of guards. When you are in the building you will walk around the glass coffin (still in the 2 people wide queue) and then straight to the exit. I think it’s like 5 minutes or so that you’re actually inside. You cannot bring a bag inside and you cannot take pictures. You can leave your stuff at the reception. A visit to the mausoleum is definitely one you will remember. 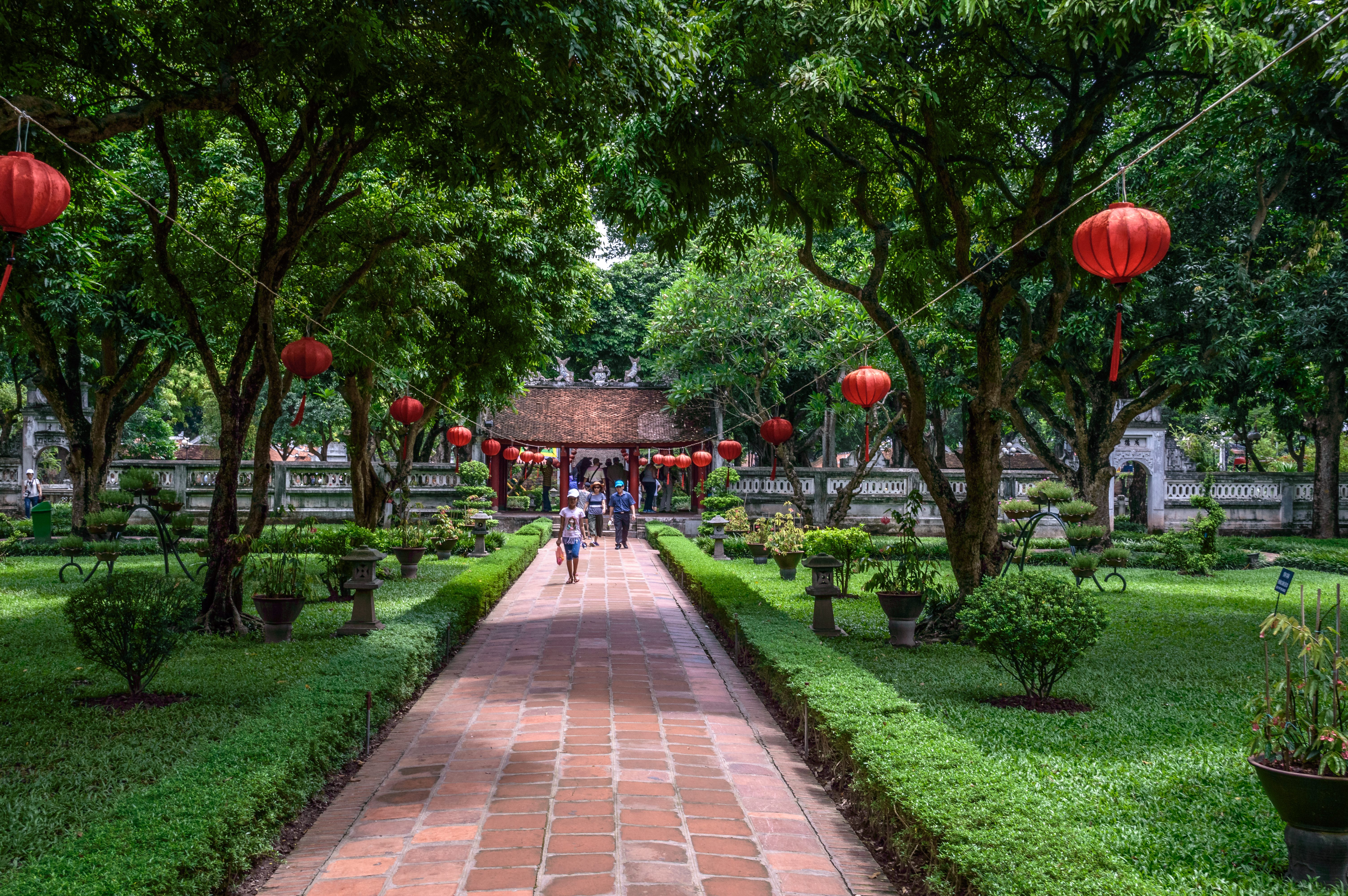 Parts of Vietnam we skipped

Hope you enjoyed this second part of our Vietnam route. Feel free to follow me and/or upvote my work. If you want to know anything about places we stayed, trips we did or any other practical information. Just put a comment down below and I will gladly get back to you.

If you’re interested in any of my previous work, feel free to check it out:

Edit: I think you'll get more upvotes if you use one of your photos for the first image of the post. That's what gets made into the thumbnail. When I used maps as my first image I hardly got any votes.

Thanks again! I’ll try to avoid a map as the thumpnail in the future.

The picture with the fog is my favorite :)

You mean the one from Ta Van? Was pretty cool because it was so foggy/cloudy during our hike, also some rain from time to time. But sometimes the air would clear up a bit and would present you with some very nice views like the one in that picture!

Yep, that one :) the universe can be very generous and present us with that kind of views from time to time :)

Hope you got a taste of all their wonderful dishes as well :D Vietnamese food is amazing!

Did you like the North or the South more? :)

Yes we did! We loved the spring rolls and Pho. Especially the last one because it's really nice that every part of Vietnam has their own kind of recipe and ingredients for the same dish.

It's hard to say. I think the people in the south are more friendly than in the northern parts, but nature wise we liked the north better.

The @OriginalWorks bot has determined this post by @steef-05 to be original material and upvoted it!


Please note that this is a BETA version. Feel free to leave a reply if you feel this is an error to help improve accuracy.
$0.00
Reply