(image source)
Hello, Fellow steemians! I Hope everyone is doing well. Its nearly been a month since my last post, today I will be discussing an interesting science topic which I'm pretty sure you had not heard of before!

What is Heteropaternal Superfecundation?

Superfecundation is a rare condition where two ova are released during a single menstrual period and both get fertilized by different acts of coitus at a short interval of time, usually few days.
Whereas we use the term Heteropaternal superfecundation when the two acts of coitus are by different person i.e. two ova are fertilized by sperms from two different males.
Here is a case example of this:

"Oliver and Emma are a couple married for about a decade. After a few years of marriage, they gave birth to twin male babies. At first, parents did not notice any difference in them. But as the time passed, despite being twins they looked completely different. One was fair skinned and the other was dark-skinned(just like the picture above) and they were different in builts. The husband had some suspicion of interchange of one baby in the hospital during delivery so he did DNA testing of them. What they found out was surprising- These twins had completely different DNA make up which was not possible from a single father but both of them matched with the DNA of mother. Later on, the wife revealed that she had coitus with another man few days before she had with her husband. then DNA of the suspected child was Matched with that man and it was proved he was the real father of one of the twins"

Have you ever heard a story like that? I guess not. From this case story, you must have made an image of this condition in your mind.
This was a brief intro to the condition. Now we will talk about the mechanism behind this.First of all, we will discuss the normal mechanism of ovulation and fertilization and then we will see what different thing happens in Superfecundation.

Ovulation is the process of release of mature ova from graffian follicle of the ovary in each menstrual cycle. Its a complex neuroendocrine process involving Hypothalamo-pituitary-ovarian axis, .i.e series of information pass from the hypothalamus to pituitary and then to ovaries in the form of various hormones.

During the entire reproductive life, a female can ovulate about 400 ova, one in each period. These ova are nothing but the matured germ cells of the ovary. At birth, there are about 7 million germ cells which reduce to 2 million by birth. As a girl reaches the puberty, about 400,000 of oocyte remain in the ovary. And only 400 out of those 400,000 are ovulated in the entire life. Fig.- Normal menstrual cycle showing relation of change in hormone level(FSH & LH)) with the uterine and ovarian changes(you can ignore other things)(image source)

The process of maturation of an ova begins in the early days of the menstrual period. FSH(follicular stimulating hormone) released from the pituitary in response to low estrogen during menstrual bleeding starts to stimulate the follicles of the ovary. Few thousands of primordial follicles are recruited and they undergo maturation. Out of those, only 20 follicles (10 from each ovary) reach the matured state(antral follicles). And again, out of those 20 antral follicles, only one follicle grows enough to become a dominant follicle whereas other follicles die. In the end, only one egg/ovum is released in each menstruation(i.e only the dominant follicle will release the ovum).
You must be thinking- _" what's the basis of one follicle being a dominant follicle?"_ The answer is very simple, the follicle containing the highest concentration of estrogen and the maximum number of FSH receptors will get proper stimulus from the pituitary(Through FSH) and thus gets proper nutritional support for maturation of ova inside it. The follicular stimulating hormone induces LH receptors on the dominant follicles. later on, at about 14th day of cycle, LH(luteinizing hormone ) surge occurs(LH surge - the anterior pituitary releases very high amount of LH) and results in ovulation. 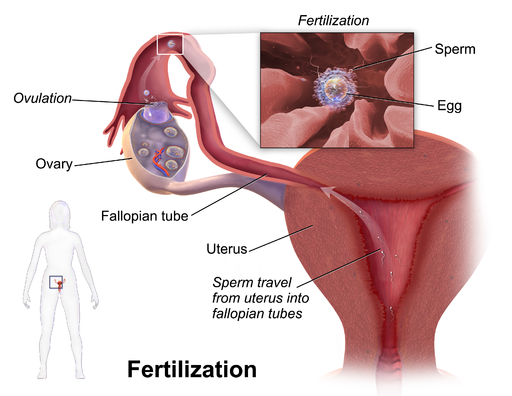 Now, let's talk about the proces of Twinning : How twin Babies are born? Twins can either be monozygotic or dizygotic. When one sperm fertilizes single ovum a single zygote is formed. If that zygote later on splits into two parts, it will form two fetuses and this is monozygotic twinning. Whereas there can be another condition where two sperms fertilize the two ova into two zygotes & thereby form twins, this process is dizygotic twinning. Earlier I have said about the dominant follicle where only one ovum gets ovulated in one cycle, you need to note that sometimes two ova are released in single cycle, It can occur once in 100 cycles. So the "Domiant follicle" theory does not apply here.

What happens In the hetero-paternal superfecundation?

Up to now we have learned about Ovulation, fertilization and the mechanism behind twinning. The process of superfecundation is not much different from twinning .
In dizygotic twinning, as we have discussed above one coitus can produce two zygote and then twins. In superfecundation, two acts of coitus are required but at short interval of time where the sperms can fertilize two ova released at different points of same menstrual cycle.
Now, in Hetero-paternal suprfecundation the coitus should be with different males. Following conditions are required for it.

You have to ovulate twice (dizyogtic). This is actually not so rare an probably happens in more than 1 in 50-100 ovulations.
You have to have sexual intercourse with different men within a couple of days to one week prior to ovulation. That allows two different sperms(from different male) to fertilize two separate eggs.(source)

Here are some true case stories of Heteropaternal superfecundation if you like to read:

Superfetation is not same as superfecundation !

There is another term called "superfetation" which comes along with superfecundation and some people might consider it as the same thing, but it is different in the fact that It occurs in two different menstrual periods. when two ova released in different menstrual period get fertilized, we call it as superfetation. A female gets pregnant who is already in her pregnancy. This is very very rare and is only reported in animals.Generally, the 2nd fetus is small and premature when both are delivered at the same time. But there can be the birth of 2nd fetus after some time of birth of 1st one where the 2nd child is also fully developed.

That's all for today, we have learned something new about ovulation, fertilization, twinning and superfecundation. If you have anything to ask regarding this post feel free to leave a comment.UPvote and resteem this post if you liked it and follow @himal if you do not want to miss my future posts.
Here are some of my recent posts:

Images
The images source are linked below the each image and most are labelled to re-use. No copyright infringement is intended, if you have any issues with the use of images in my posts you can contact me.

It is a community driven project in steemit run by the scientists and people having great affection for science. It promotes S-science(including medicine/health),T-technology,E-engineering and M-mathematics in steemit.You can join our discord channel here- discord.gg/mKSKQ7T.

I didn't know anything about all of that, to be honest (and of course the story). Do you want to know what I thought first when you mentioned superfetation? Some Greek cheese... (@ruth-girl and @trumpman will know have a good reason to hate me ;) ).

I also knew these terms only a month back while i was studying the medicolegal aspects of marriage and pregnancy. It's use is mainly in those cases for sorting out disputed paternity, as a basis for divorce, inheritance claims etc..
And i didn't know some greek cheese 🧀 is called superfetation
😂😂. It must be the cheese made from milk of cows/buffaloes born by superfetation 😂.

It is more the 'feta' root that made me think about that. But more seriously, I really enjoyed your post. I learned many things from it :)

Your weird connotation made me think of feta wearing Superman's cape! :P

And some oregano and olive oil on top. Oh and tomatoes, cucumber and why not some green peppers and crunchy toast bites... Oh what the hell, let's make some choriatiki salad! :P

choriatiki? This I didn't know! But at the end (and after googling it), it looks like this is what is traditionally called (outside Greece) a Greek salad :D

Yeah, that's what the rest of the world knows as a Greek salad! We call it choriatiki, it means it's from the village - just don't ask how they came up with this name :P

Such a lovely post from himal..
Well done mate

Thanks for reading it @drraut, glad you liked it.

To save some relationships, please keep in mind you can have mixed twins (one black one white) from the same father. These are fraternal twins from a a multiracial couple. The media (for example) often portrays this as really surprising but the differences in these fraternal (dizygotic) twins should not be that surprising when you think about it. This is because fraternal twins have genetic differences just like you are different from your brothers and sisters. It is just the random chance of receiving different alleles (gene variants) from your parents and these cases the the gene variants that control melanin production the main pigment found in skin.
Love Genetics!
Cheers!
ian

Thanks for the comment @rcebike, i agree with your view regarding saving the relationship.. yeah black and white twins can be there from interracial parents.. But DNA matching will clear the answer in this case which is diff in superfecundation...

This is so interesting, I haven't seen or heard of such thing before. However this is science explained what can we say?
Morality of the story
Fidelity should be maintained in marriage as well. All we ever heard was that a man can get two females pregnant for him and not a female carrying pregnancy for two males
oddities yet reality
Great writ up

Thanks @steembuilderz for the comment.
Fidelity is an important aspect of any relationship.

I can't help but imagining the father's frustration when he found out what his wife did. I mean I've heard stories about a white couple that the woman's infidelity was exposed when she gave birth to a dark-skin baby, but your story is way cooler!

Thanks for reading it @ruth-girl :), yeah it will be way frustrating for both husband and wife if happens in the real life. The story at the beginning is made up one :).

The scenario would make a cool comedy write-up though ;)

Thanks for sharing....Learned a lot.

You got a 0.99% upvote from @postpromoter courtesy of @himal!