himal (56)in #health • 5 years ago (edited)
Hello My steemit friends! Hope you all are doing well!
Today we will be continuing with the history of cataract surgery.

This is the 2nd part of the post - A Brief history of Cataract Surgery : From Ancient couching method to the latest Femtosecond Laser Surgery (Part 1). so, i suggest you to go through that one before going into this post.
In the last post we learned about Basics of Human Eye, quick mechanism of cataract formation and most importantly the different methods of cataract surgeries i.e.

Today we will learn about Evolution of Intraocular lenses, Femtosecond laser surgery and other latest advances in cataract surgery.

As the name suggest these are the lenses implanted inside the eyeball following removal of the cataractous lens, these are different from lenses you use in specs or the Contact lenses. These may be anterior chamber IOL(AC-IOL) or the posterior chamber IOL(PC-IOL) depending upon their location relative to Iris, if lens is implanted in front of iris it isAC-IOL and if behind iris its PC-IOL. 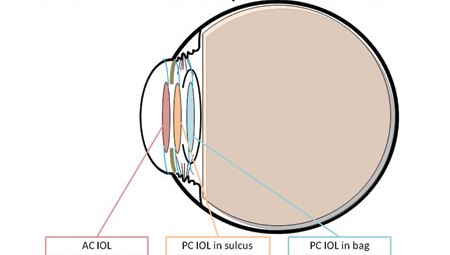 Prior to the development of Intraocular lenses the cataractous lens were removed but eyes were left Aphakic(Without the lens) . so, to compensate the refractive error arising due to removal of lens they used to be given very thick glasses to wear. At that time People could not imagine the fact that a prosthetic lens can be implanted inside the eyeball. This view changed after Ridley did the miracle of finding the answer.

There is a interesting story behind development of first IOL :

Harold Ridley was an eye surgeon in London who had cared for some Royal Air Force pilots injured in World War II. During the Battle of Britton, at least one pilot had taken flight in his Spitfire fighter plane without putting on his protective goggles. Enemy fire caused fragments of the canopy to shatter into the pilot’s eyes. Doctor Ridley had noticed that retention of the intraocular particles of polymethylmethacrylate (PMMA) from the shattered canopy caused no long-term adverse effects. Later, during a typical cataract surgery in 1948, a medical student observing the surgical removal of the clouded lens asked Dr. Ridley when he would put in the new lens. The medical student did not know that there was no lens implanted back into the eye. This naive question, together with Ridley’s knowledge that a type of clear plastic material called PMMA was tolerated when it remained inside the eye, stimulated Ridley to seek manufacture of the first modern-era IOL.[1]

This was how Ridley was able to make first ever intraocular lens. In about 10 years of this discovery hundreds of Ridley's IOL were implanted. But, at the time then, these surgeries were not done in good aseptic conditions so there was high incidence of post operative complications. there was high percentage of post operative patients with dislocated lens and glaucoma. Another demerit of these lenses was that they were not accurately calibrated for the refractive errors of the patients, so most of patients had to put thick extra ocular lenses additionally.

Improvement on the size of incision : smaller the incision better the results

During the time of ICCE very large incision were to be given to extract the lenses. The incisions were as big as halfway the cornea. sutures were also not developed at that time because of which patient had to remain immobile for long period and thus, post operatively during the healing of large incision large scar is formed which stretches the cornea and astigmatism is developed. Later on, with the advancement of surgeries, smaller incision were made possible and sutures were also developed by then. The conventional ECCE requires about 8 mm of incision to extract the lens which is very large as compared to the latest methods. The modified ECCE i.e small incision cataract surgery requires only 3-4 mm to extract the lens.whereas Phaco-emulsification which uses ultrasonic waves to breakdown the lens requires even smallar incision, the fragmented lens can be aspirated with the small needle.

smaller the incision more rapid the healing with small scar and less chance of astigmatism.

But the Problem was not solved......Why? with the smaller incision and newer technique the cataractous lens could be removed easily but to compensate the refractive error (produced by removal of cataractous lens) a new lens should be inserted again through the cornea into the anterior or posterior chamber. But the problem again was that the size of lens produced by Ridley was about 8 mm . That requires even bigger incision to insert and problem of astigmatism and other post operative complications remain there. Then came the ideas of different types of IOL.

After 1950 A.D. i.e. after development of 1st IOL, different materials were studied and experimented to make the IOLs which could be inserted through small incision.

The material which sir ridley used was PMMA(polymethylacrylate) which is a rigid substance and requires a large incision.
Flexible material mostly used now are silicone, Acrylics and Hydrophilic Gels.

Picture above shows the structure of silicone, which is a polymer of silicon and oxygen.It was the first material to be used in initial foldable lenses and it is widely used now too.Handling of this requires injector and its a bit difficult and it may be damaged.

Then came the Hydrophilic and Hydrophobic acrylic lenses, thesse are mostly used and most successful intraocular flexible lenses. Their handling is easy, so less chance of damage and have less incidence of inflammatory complication post operatively.
The latest one are the Hydrogels which swell in contact with water, they can be inserted with the help of small needles. First Femtosecond laser surgery was performed by Dr. Nagy, hungary in 2008.
(femtosecond- 10^-15 s)
As suggested by its name, peculiar type of radiation(which fall in infrared range) is used in this procedure and their wavelength is in the range of a femtosecond i.e 10^-15s. Previously radiation of a bit longer wavelength was used(nanaosecond) but it was found to have damaging effect in other ocular structures.
In this procedure Same laser is used for incising the cornea, cutting the anterior lens capsule and fragmenting the cataractous lens. These lasers can cut the cornea in less than 10 seconds.

The special thing about this surgery is its accuracy in giving incision and it can be reproduced by program.

Friedman and colleagues, at Stanford University School of Medicine, measured the accuracy of an OCT-guided femtosecond laser for cutting specified circles and curved incisions and compared it with manually created capsulorhexis in a small human study. 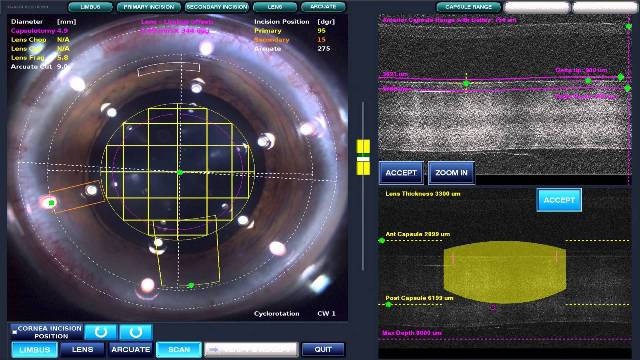 This is very sophisticated method and consumes very little time, but due to its high cost its done in limited centres around the world.

Thanks for your time, if you have any queries feel free to write in comment.If you liked this post upvote and also resteem it so it will reach to more steemians, and follow @himal not to miss my future posts.

It is a community project run by scientists of the steemit and other people who love science.It promotes good science post in steemit.You can join steemit chat channel here---https://steemit.chat/channel/steemSTEM

As suggested by its name, peculiar type of radiation(which fall in infrared range) is used in this procedure and their wavelength is in the range of a femtosecond i.e. 10^-15

I always have a weird feeling when I read a number without any unit attached to it... :D The physics professor speaks here. I am just used to be very unhappy when units are not there :p Well he did define the unit as a femtosecond :p

On the left hand side of the i.e only :p

Thank you very much for reading it.

Very interesting read that inspires me to learn more. Your post cleared up the history of cataract surgery, leading to the use of the Femtosecond Laser.

I find it interesting that LASIK uses a type of Femtosecond Laser. These days lens replacement is replacing LASIK, and is common with patients that do not have cataracts.

I know that is a different topic, and you did a great job staying focused on cataract surgery in your post. --3D

Thank you @three-d for reading it & for you good feedback.
Yeah LASIK(laser in situ keratomeleusis) also uses the femtosecond laser but its a different approach where only cornea is involved. Basically what we do in lasik is just thinning out the corneal stroma to correct refractive error.

Just healing up from this surgery! Amazing what they can do!

Oh! What type of surgey you had had? .. Get well soon.
Yes, they are amazing. Many people who are even completely blind can able to see the world clearly just in few minutes of the cataract surgery.

I believe it was the SICS.... Fragmented. Everything looks so clear and crisp now. I'm very happy with it :)

Thank you too for reading it.

It's interesting what you can do for people if you treat them like machines.

;) its like changing the lens of a broken camera , isn't it?

Yo! My friend is back. Welcome bro.
Is intra-ocular lens the same thing as bionic lens?
Nice piece bro

Thanks for welcome friend .
There are various types intra-ocular lenses and bionic lens is one of them. Any lens that is inserted into the eyeball is intra-ocular lens.(Intra- inside, ocular- eyeball) .
Bionic lenses are advanced type of lenses which use newer technologies- they consume less enegry as compared to our normal eyes, they enable us to view very distant objects which are not possible to view with our normal eyes.
They can be used to replace the cataractous lens or even the normal human eye lens.

Thanks a lot for the quick lectures bro

no loss to take the time to read your post, this is really a new science for me. the explanation is clear and easy to understand

Thank you very much for reading it @jeffryphysio

Informative !
I have a post on my profile that tackles about Antimatter :)
It's awesome if you could read it too ..
My Post On Antimatter

Thanks for reading it. You can not do post promotion here , there is steemit.chat for it. Some people might flag you for this.

You got a 0.93% upvote from @postpromoter courtesy of @himal! Want to promote your posts too? Check out the Steem Bot Tracker website for more info. If you would like to support development of @postpromoter and the bot tracker please vote for @yabapmatt for witness!