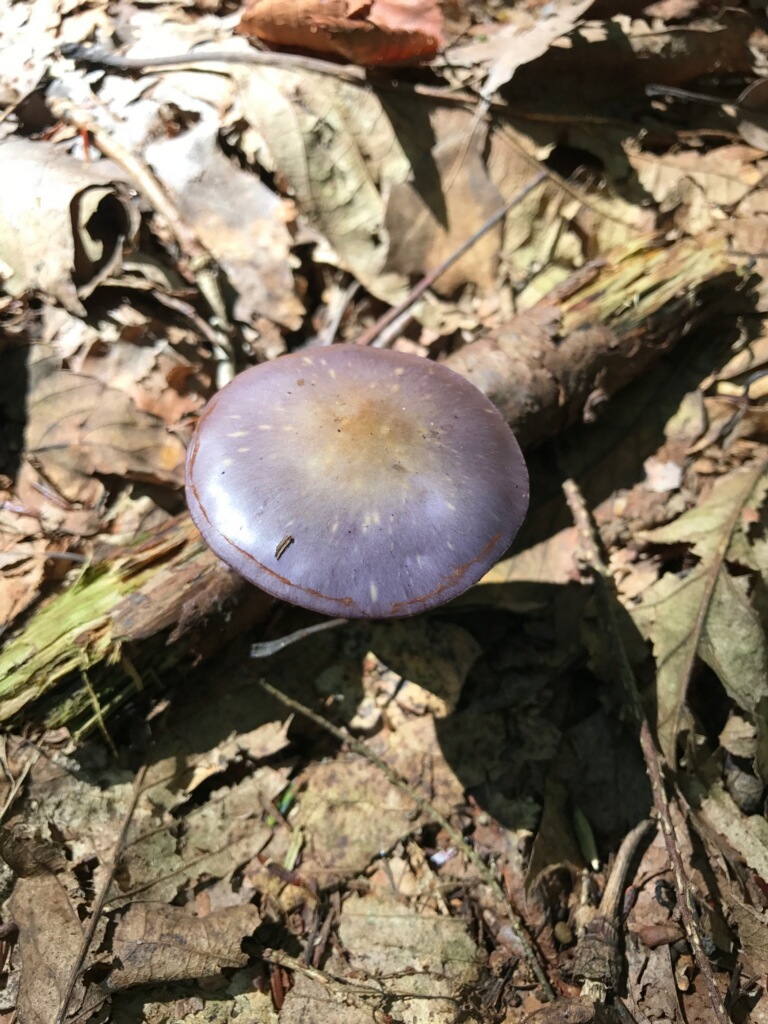 Color is a big part of what makes mushrooms so captivating.

We've seen the bizarre, neon orange of the "Chicken of the Woods" for example, shining like a beacon in the greens and browns of the forest. Or Lactarius indigo and its incredible blue ink.

Today we deal with a mushroom that cuts a vivid purple swath through the forest floor - Cortinarius iodes - or the Spotted Cort.

Like many species in the Cortinarius genus, C.iodes spends most of its life cycle as a vivid, glossy purple. However, it is referred to as ''spotted" because its cap is decorated in a combination of colored dots and lines, usually yellow and darkening with age. The mushroom is difficult to miss during a hike, as it tends to stand out against the dark background of the forest floor. Take a look: A keen eye would be hard pressed to miss a C.iodes specimen.

Part of what helps draw the eye to the mushroom is its glossiness - the result of a slime which covers the cap in all but the driest conditions. The slime tends to be sticky, and you'll often find C.iodes with detritus stuck to the now dry cap, as in the two pictures above. The glossy, sticky slime on the cap means the cap is "viscid", which is why the alternative nickname for C.iodes is the "Viscid Violet Cort."

The specimens in these photos are all on the more mature side for C.iodes, which is why the caps are nearly entirely flat. When they are young, they begin conical or bell shaped, and then flattening out into a broader convex shape with a bell like raised center, until becoming almost entirely flat in old age.

Let's take a look at the underside: 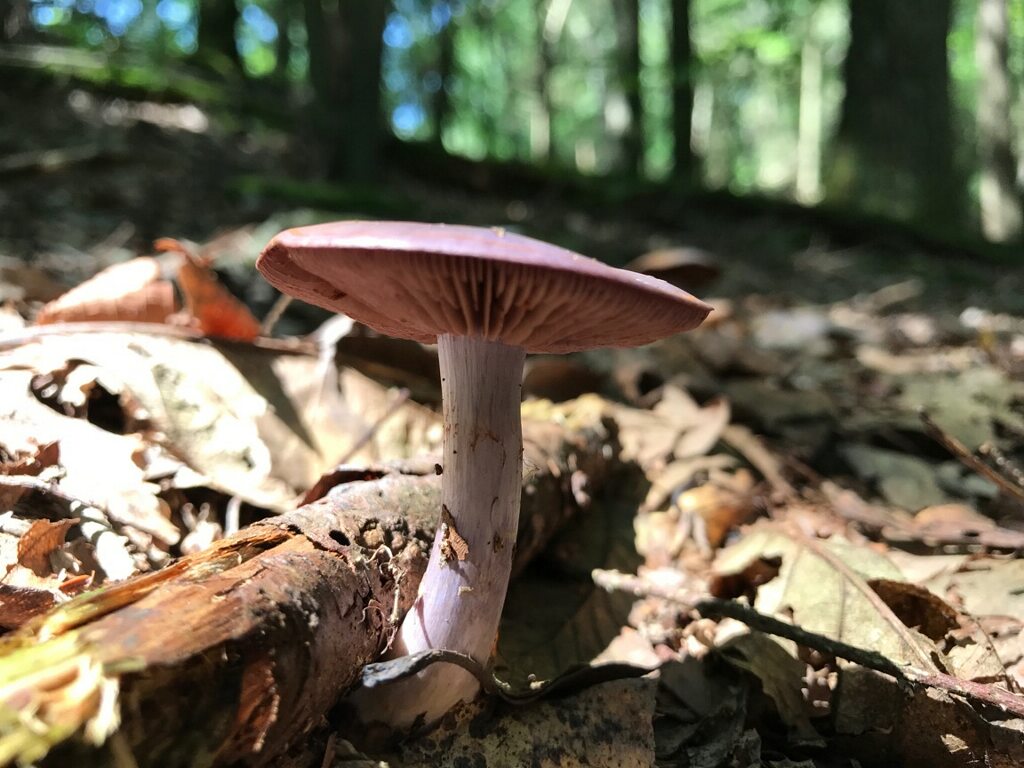 A purple/white stem with some rust coloration from the spores and residue stuck to it as well.

The stem is central to the cap, can grow to a fair length and is quite prominent. It is also potentially slimy and viscid, and as you can see in the above photo, it also has detritus stuck to it now and again. You can also see just a bit of rusty brown thread-like filaments about an inch down from the cap. That is common as well with C.iodes, and can be either the remnants of a partial veil, or the rusty brown spores of the mushroom collecting on the viscid surface of the stem.

Speaking of the spore print, lets take a look: Rusty brown is quite accurate.

There are about three different mushrooms pictured in these photos, and each of them has a differing degree of "spots" on their cap. The caps appear as the mushroom matures and tend to vary, but all with have yellowish spots or streaks of some kind, ageing to a brown in the center. Indeed, this is probably the primary unique characteristic of the species.

There are several lookalike species, but one in particular is noteworth: C.iodeoides. This mushroom can sometimes, very nearly, look identical to C.iodes. There are two ways of telling them apart, one far less savory than the other:

Personally, I have no intention of licking mushroom slime in order to confirm an identification - so if need be I'll break out the old microscope, and suggest you do the same, thank you very much. 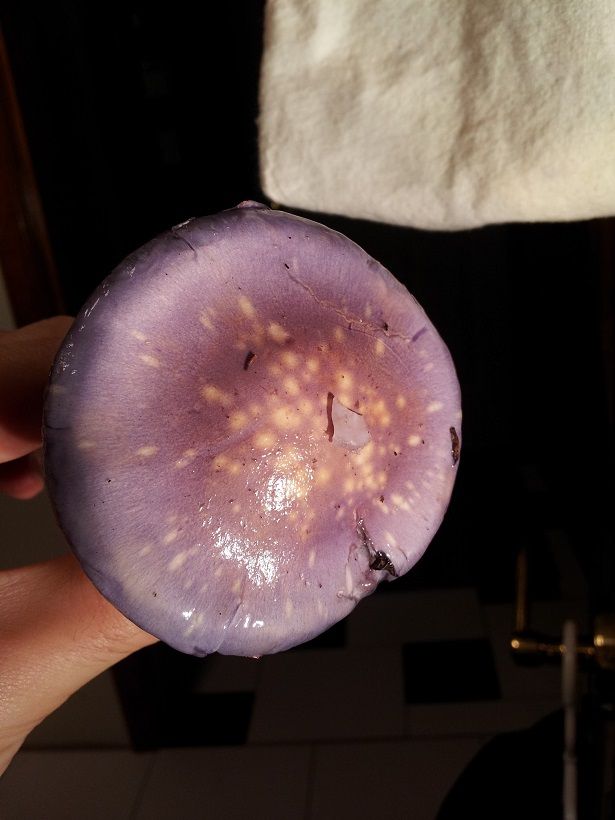 Whether you decide to give it the ole "lick n' spit' or not, C.iodes is a delightful mushroom to stumble upon during a nature hike.

If you tend to takes walks in the deciduous forests of the Eastern United States from the summer through late fall, you are likely to encounter one of these pretty things. When you do, take one home and examine it. It is a great starter mushroom for identification purposes, as it has clear macro-characteristics, spore prints quite easily, and is very photogenic.

Photo Sources:
Either my own or provided to me by @steemtroller

Do you want more earnings?

By doing things above you will give us more STEEM POWER (SP) to give you more earnings.

That's a really cool mushroom! That first photo kind of reminds me of a jellyfish. Thank you for the informative post.

I always love your posts. Looking forward to the next!

Wow, those are some amazing pictures! Ive never seen a purple mushroom that beautiful in person before. I definitely will look forward to your mycology posts.

Thanks man - it just rained in NYC - so hopefully there are more mushroom photos in the near future.

Interesting mushroom. No idea they can some in such crazy colors. You always see the red ones and that is about as crazy as they get for me. But one with a purple cap and orange spore print is straight out of Alice and wonderland! Thank you for posting very interesting and informative.

Oh they even stranger than that my friend. Take a look at some old posts - and future ones as well. Some real oddballs out there. Congratulations! This post has been upvoted from the communal account, @minnowsupport, by justtryme90 from the Minnow Support Project. It's a witness project run by aggroed, ausbitbank, teamsteem, theprophet0, someguy123, neoxian, followbtcnews/crimsonclad, and netuoso. The goal is to help Steemit grow by supporting Minnows and creating a social network. Please find us in the Peace, Abundance, and Liberty Network (PALnet) Discord Channel. It's a completely public and open space to all members of the Steemit community who voluntarily choose to be there.