Emphasizing that I am unable to verify the claims made in this email, I think it is still appropriate to publish the information in full so that interested parties can review it and decide for themselves whether it is credible. Many of the claims go along with my interpretations of #QAnon since its appearance on the chans, but that in itself does not prove their authenticity. I ask that you use your own discernment and, as much as possible, be willing to challenge previously held beliefs.

I am making some effort to reach out to the individuals implicated by the author and I would like to give all of them a chance to respond to the allegations on my show. I can be reached by Twitter DM or email.

Here is a screenshot of the email in my mailbox and below will be the complete text. 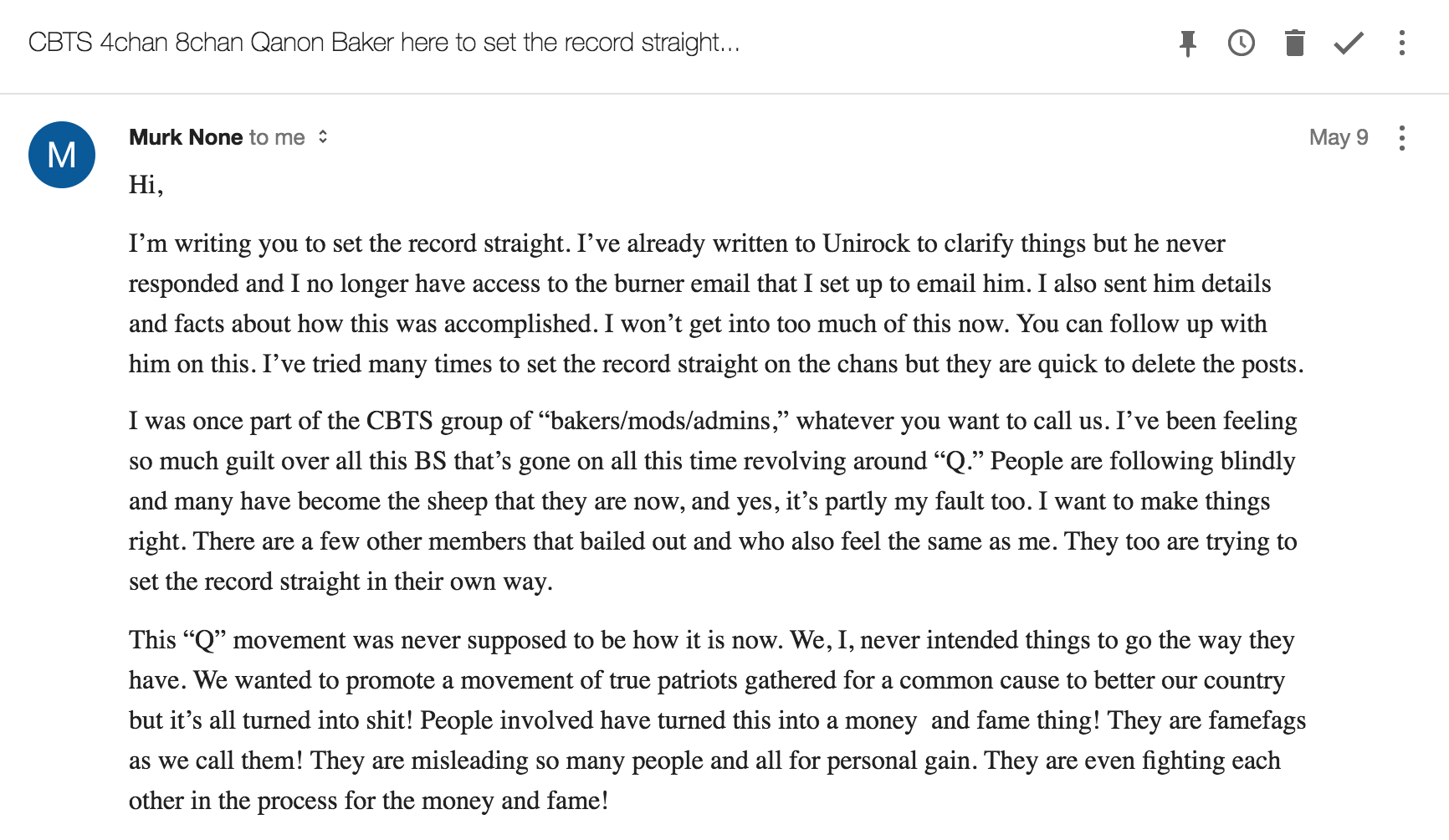 I’m writing you to set the record straight. I’ve already written to Unirock to clarify things but he never responded and I no longer have access to the burner email that I set up to email him. I also sent him details and facts about how this was accomplished. I won’t get into too much of this now. You can follow up with him on this. I’ve tried many times to set the record straight on the chans but they are quick to delete the posts.

I was once part of the CBTS group of “bakers/mods/admins,” whatever you want to call us. I’ve been feeling so much guilt over all this BS that’s gone on all this time revolving around “Q.” People are following blindly and many have become the sheep that they are now, and yes, it’s partly my fault too. I want to make things right. There are a few other members that bailed out and who also feel the same as me. They too are trying to set the record straight in their own way.

This “Q” movement was never supposed to be how it is now. We, I, never intended things to go the way they have. We wanted to promote a movement of true patriots gathered for a common cause to better our country but it’s all turned into shit! People involved have turned this into a money and fame thing! They are famefags as we call them! They are misleading so many people and all for personal gain. They are even fighting each other in the process for the money and fame!

What I am admitting to you is that “Q” is fake. The real people behind “Q” are those that are affiliated with CBTS, as well as some from 4chan and 8chan, and some from reddit. It’s a big group and yes I was a part of it. That’s all it is, one big research group with skill sets to make this all believable. I have no reason to lie.

Thank you for following, upvoting and resteeming!

Whether Q is fake or not doesn't really matter. It has gotten people to ask questions, look into these topics for themselves and stop being sheep. Either way u look at this its a good thing and one our society can grow and build from!

It does matter, quite a bit.

Hmm. Your post reminds me of ...something Side of Beefy

With Hitlary, we learned it made quite a difference. Enough to torpedo the U.S. Government! (And Libya, and thereafter the EU, and most certainly Syria...)

Ponzi Q used cryptic, shilly-sounding canards to impersonate a Trump Admin "insider." And clearly strung people along without correcting any of the clearly-mistaken and provably false theories of Anons. And took credit for gathering autists for a Storm (that simply never came: it was "calm BEFORE the storm" and then "patriots fighting" during this storm and, if I recall, "justice!" I missed the "storm"!)

The difference QLarp makes is that the intention was evil: Ponzi! Make money off of who they hoped would be ignorant neckbeards. That has a way of punching a hole in the real movement, by giving false hope to who they'd hoped were real Americans wanting to take back their country.

We were already thinking critically; that's how Trump got elected.

I understand where your opinion comes from and you want to see these deep state sickos go down just like me and every other non brainwashed human being.

However, for the record I do believe the Q group is legit and there has been many corroborating clues/hints through the months to show this. Not sure how much looking into this subject u have done, but all this info is out there if u are interested. There has been no money made by this for Q anon and I cant see how it/they would. And if it awakens the masses to an elite corrupt deep state that controls things from the shadows (which is definitely real and a fact) than I cant see how it would matter if Q is a fake.

Again being real or a fake wouldn't matter because all its doing is bringing these dark topics to more and more people that would not otherwise be exposed to it. I would not consider this false hope, I would consider this something to build this movement and make it stronger. The 25,000 plus sealed indictments definitely mean there is much to hope for.

That’s what I’ve been trying to tell people all along with this Q thing. Do not follow it blindly and be careful if people like Jerome Corsi have hijacked the movement to make money off of it.

I am grateful for it in a way though. I have friends who were totally asleep, look into Q to discover pizzagate, other human trafficking and all sorts of government corruption. While people shouldn’t be fooled by it, I am glad that it played a part in waking people up.

Really? I hope it is true that it “woke” people up. I personally do not know anyone outside the box of already “woke” or semi “woke” who have, to this day, even heard of Q. I feel it hurt the semiwoke folks, seriously turned some of them into war hawks, trust the plan, crap. I really hate the term “woke “ I really do. I can’t see Q followers or Corsi or anyone harking for war as “ Woke”. Some of these people are calling themselves “truthers”. Hahahahaha. Well, that is just my take, I could be wrong.

I agree with you. I'm just saying that it woke up a couple of my friends and then I was able to direct them away from the disinformation that guys like Corsi pushed.

I agree 100% - I think what whoever Q was did something good overall by waking those who read up.

Regardless of if he/she is real or not, they led people (like myself) to do their own research and make some wild connections that are intriguing and sometimes legit.

With all this said, the pretext that Trump is GEOTUS is madness. His actions disprove this (bombing Syria, pulling out of Iran deal).

Exactly. All I'm saying is that it helped wake a couple of my friends up and from there, I was able to direct them from the disinformation that shills pushed.

I found the opposite was also true. Made people lazy, complacent, research less as much, sychophantic, inflexible, and eventually jaded.

I agree with this as well, I think anyone who is still blindly following Q unconditionally falls into this category.

The people behind Q didnt wake anyone up, they fooled awake people made them lazy and compliant and gave them false hope. Bunch of liars were no better than MSM, lying for the globalists. They for damn sure didnt wake anyone up who wasn't already awake... they put people back to sleep and helped further to discredit the alternative news community.

I really hope you publish three whole letter. Im believing The letter writer over baruch at this point. I still have to listen to the whole interview. Uni didn't ask many questions unfortunately. .. but someone brought up a good point. He said he was kicked off the board. How could he be kicked off his own board?