I knew it seemed too good to be true.

I was late to join the Q-Anon movement/conspiracy. But when I found out about it last week, I was totally entranced.
I'm not a nut-job don't worry. Consider me a fan of Hegelian dialectic and a bigger one of doing some detective work.

If you aren't familiar with Q-Anon... 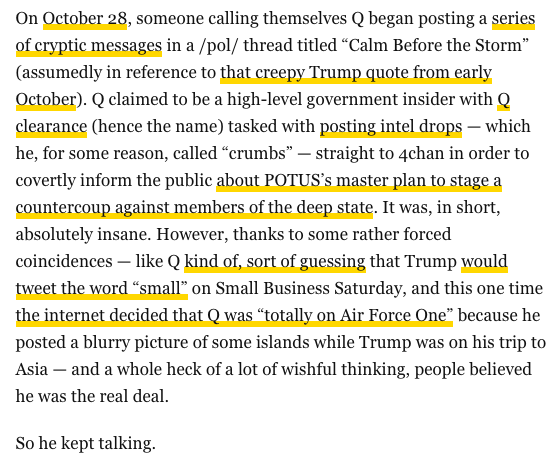 Despite my excitement playing connect the dots, some of the posts didn't seem to add up.

It seemed to be bits and pieces of other conspiracy theories/alternative news.

I wanted to believe it.

At first, some of the posts seemed so dead on II thought maybe it was an insider doing a reverse PSYOP (psychological operation) to trick people for Trump's benefit.

Then I started to pick up on a few things.

So I went over some posts that seemed cryptic. One in particular stood out...

After a bit of playing around, Google niftily informed me that DFbF was a unicode character... The only issue isn't it isn't a valid unicode character. So i typed each side into Google. "LOW DFFF DCOO SURROGATES".

On the first page I found a post linking to a patent. The developer had more patents. Here's what they are... 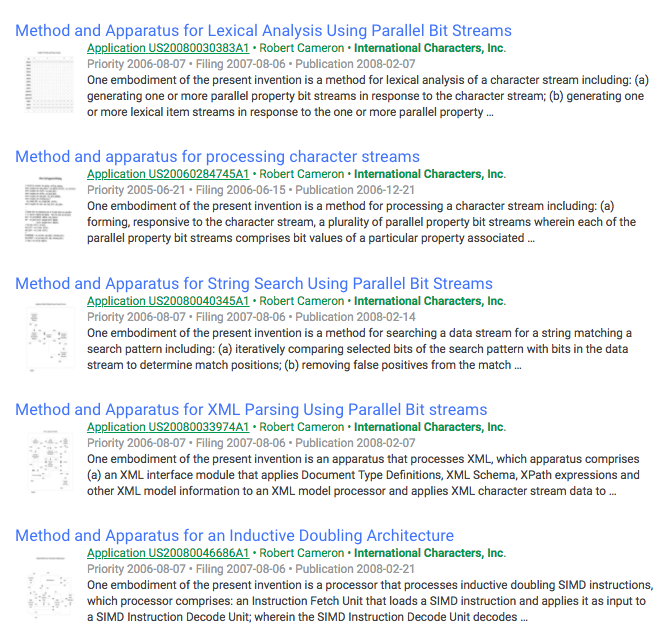 So essentially this developer is working on using parallel machines to analyze tons of text from different sources.

Naturally, my next search was for "International Characters, Inc."

So what was going on here? Was this a test of how powerful the system was?

The trail stopped there. Then I remembered something I had seen trending on paste bin that seemed strange to me at the time. I hadn't make then connection yet....but then I had an enlightenment.

Back to pastebin I found what was said to be a leak of a new set of Magic the Gathering playing cards.

Then I realized what I was reading. That pastebin link, outlining the new deck, had some similarities to how Q had played his game. 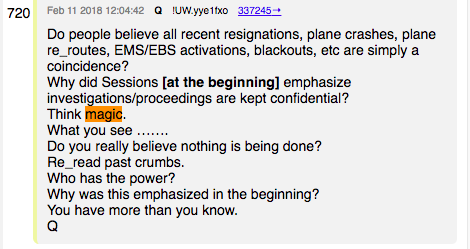 Next over to the manufacturer's site. I clicked on "Gameplay. How To Play." and saw that it showed a deck of cards that followed a blueprint of how Q had posted all along. Look at the similarities in the last two line.

Searched for it, read up a bit, then did some more connect the dots and I found the company working with "Magic" [Wizards of the West Coast technically] on marketing employs some of the technology in both the patent as well as Sophia. [agency: www.wsipowered.com]

I've gotta run so that's all for now.

This thing keeps snowballing so I'll post a follow-up with more proof I've found later on including the Snowden aspect. I just wanted to get this out before that snowball becomes an avalanche.

P.S. - While there bits of the Q story I'm inclined to believe, this counter-story makes way more sense. To me at least.

Well, I had no clue what this whole q-anon thing was until this post, so thanks for that.

HOWEVER
This is hardly a debunking. It's more of a reverse rabbit hole. I'm gonna call it a Naga-hole because I'm a D&D fan. I actually thought this was satire until I saw no indication of such in your tags. Anyhow, this Naga-hole of yours reads like the flimsiest of conspiracy theories. Maybe you have some evidence that you left out, but all I see here is....dot manipulation.

wait for the response. check my response to puggle. and...

+1 for giving me far to much credit!

Last week? You are way behind, dude. And way off base. I can’t get over not knowing about this until LAST WEEK and then trying to debunk? You better hope the Chan’s don’t catch wind of you/this...

atlantanne - you're fucking SCARY, dude. What will they potentially do? Cyber-bully and dox like they did back in the early 2000s? Why would you trust a nonsensically cryptic, supposed insider, who plays to that kind of crowd? Do you believe in such brutal mob justice?

You will be an excellent detective)

Okay ... so what are you Bit saying exactly does this mean land QANON is really just AI project that is connecting lexicon through different sources and using the parallels to connect random dots?
I don't get what you are trying to explain.
What is the connection with the game i am really lost there please enlighten me more.
...
The plethora of proof that Q has bestowed apon us as evidence of his legitimacy is a bit too complex and enthralled with emotional prejudice that I can't believe a machine with no emotional output could have the abilities required to be the Q movement we see

Im saying it's essentially picking up on sentiment by meta-searching mentions of Q, Qanon, Q-anon, Trump (etc..) as well as the 8ch sentiment itself. Then most of the posts are likely written by the algorithm based on the sentiment to get those interested....more interested.

The machine takes emotion and quantifies it. Think keywords. Like his mention of a social media site going down soon for breaking the law and mentioned insider sales. A day or two before that Zuckerberg had unloaded a huge amount of shares.

The timestamps on the Tweets are easily explainable. When "Q" [real or not...anything is possible] tweets before POTUS it's reading the sentiment across the internet preceding a major event, with a weight on 4ch/8ch and what's being discussed there. Then the bot spits out what it can amalgamate.

If Q posts suddenly after it's because the bot is also constantly scanning for new tweets from Trump. So it uses its' speed to pick off the tweet and then posts with whatever it can synthesize.

Humans can do linguistic analysis of Trump...surely a fast enough spider (tech speak for web-crawler) can do it faster.

But nothing Q is saying is "new" in the conspiracy world...and if Trump is SO transparent...why would he single out 4ch/8ch and post there? Someone will likely say because the masses aren't ready for it...you have to "red pill" them. But when has Trump ever not been blunt with his words?

Well thanks for the easy to understand explanation. Maybe put it in our main body of work above for others that are less tech savvy like me, because I couldn't get even the gist of your post. Well done by the way!

what a crock this turned out to be, Q proved himself real with unique photos from inside air force 1 recently, Qanon is legit.

you're a funny guy