No Attention for Yemen: the Unworthy Victims…

I dislike using pictures (or videos) of suffering children, they are often used for political reasons. Not a post, but a book –volumes of them– could, and should be written about how children are used on a regular basis to push for “humanitarian intervention”.

Yes, “the same ones who donate, detonate… ironically” as the song goes.

Donations are like painkillers for those being punched in the face and kicked in the stomach by society. Let’s not stop the violence, soft as it looks, let’s just give them more donations.

"The Yemenis are being pulverised by the Saudis while we try to get aid in through ports which are being blockaded and while British ordnance is being dropped there." An embargo for the “criminal regime” in Venezuela will be put in place by the European Union in a few days, to add to those already in place, courtesy of the US.

What about Saudi Arabia? Well, you couldn’t possibly expect America, or the EU, to treat CLIENT criminal regimes the same, could you?

The US sold their Middle-eastern friends $110 billion weapons earlier this year, plus $350 billion more for the next 10 years. There’s no Yemen or Syria next to Venezuela. There are some other poor, Third World countries there, but Europe and the US don’t need them bombed right now.

You won’t read this or hear about it on mainstream media, but operatives from both the US and the UK militaries have been “aiding” their Saudi allies in-situ since the carnage began, this isn’t just a case of selling weapons to a medieval kingdom and then ask yourself, “well… what can you do if they decide to have a war?”

Remember Aleppo? Remember hearing about it every day? About how criminal Assad is, and how urgent that Western countries act in their “responsibility to protect”? Remember Samantha Power? 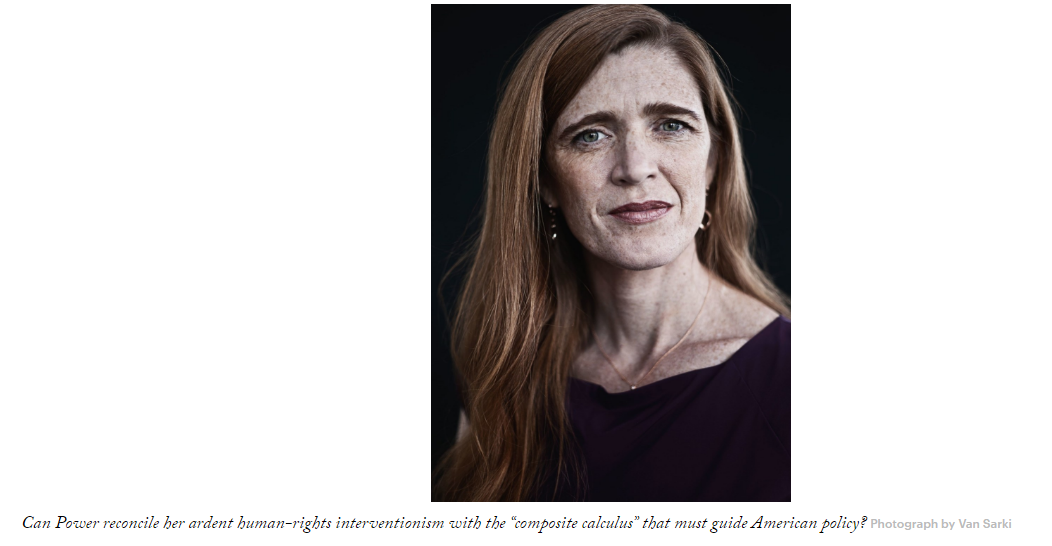 lovely: "Can Power reconcile her ardent human-rights interventionism with the “composite calculus” that must guide American policy?"

This New Yorker´s promotional article describes her while validating her rhetoric, often used by those in the service of Empire:

“Power was best known for her book ‘A Problem from Hell: America and the Age of Genocide.’ An indictment of what she called Washington’s ‘toleration of unspeakable atrocities, often committed in clear view,’ it won the Pulitzer Prize in 2003”.

Translation is rather easy and straightforward: “We should be intervening more: it sells guns”.

“Rand Paul, of Kentucky, who opposes many forms of American intervention, struck a sober note. He said he was concerned that sending American advisers into the war in Syria would lead to “more soldiers, and then we send platoons and regiments and generals.” He added, “So I would just say that even though noble intentions, I think, are yours, be very wary of what intervention means when we intervene. It’s one thing to send bread, but it’s another thing to send guns.”

And kept pushing for “humanitarian intervention”.

Rand Paul, an exception in US Congress, has called for a vote on US aid to Saudi Arabia, because the constitutional institutions should be discussing and deciding what the Deep State is often imposing on the world without any kind of checks.

The “unspeakable atrocities, often committed in clear view” by Saudi Arabia with European and American weapons are not to talk about, guns are already being sold!

We live in two worlds:

In the first one life matters, children’s life are important. In that world, mainstream media are clearly a propaganda apparatus, they should not, under any circumstance, be trusted. In this world –which I often like to call “reality” – military intervention is done under the guise of “saving the victims of tyrants” and bringing them “freedom”. The outcome is ALWAYS the same: the same people profit from it, the same people die to it. Those “rescued” end up way worse.

In the second world, the world of discourse, the world of words and charismatic, lovable “Obamas”, mainstream media exist to “speak truth to power”. After all “Democracy dies in Darkness”. In this realm, government is legitimate, even righteous… they are there for your welfare, despite the corrupt politician every now and then. An exception, of course. Wars are fought to protect “freedom” against men who are –for some reason- not men at all. They are the proverbial “huns”, devils in human flesh coming from hell to get you, because well… they hate you, you are so important to them they can’t live without affecting you, thinking about you. They hate your freedom.

“United Nations officials say Yemen will face the world’s largest famine in decades if the Saudi-led coalition refuses to lift its blockade on deliveries of aid”. Source

The first to die will be the children, as it happened during the nineties in Saddam’s Iraq… but they were not worth the attention either, as they were not the victims of the enemy.

My past posts on Propaganda, Information War, History, and Politics:

What to say actually... dirty politics is every where. No one want to help them just bcoz they r muslim.
All the country, all the leader, all the human organizations are just speech out loudly, actually they are not doing anything and do not let do anything.
May Allah help them.

They can't help them because Saudi Arabia is the aggressor, and that's an important ally of the West in the M. East. Even worse, even without Saudi Arabia the Yemenis still have to endure drone killings and Al-Qaeda.

Yeah.. but I think Saudi Arabia won’t do nothing bcoz they’re already in huge problem with their internal affairs with new King Salman. So there are no scope to help other out.
But but the UN and any human rights organisation doesn’t help them out, they don’t even speak about it. Bloody shit!!!

Curated for #informationwar (by @openparadigm)
Relevance:Exploring how the media only cares about morality when it suits them