How to Win the War of Ideas? - The Work of Susan George

For ideas to become part of the daily life of society, they must be propagated through books, magazines, journals, conferences, professional associations, and so on. If some ideas are to become more fashionable than others, they must be financed: it takes money to build intellectual infrastructure and to promote worldview.

And it was built, and a worldview was promoted. The quotation above, from Susan George, describes the Gramscian concept of cultural hegemony, and was written in 1997, more than a decade after Reagan and Thatcher, when Neoliberalism was already firmly installed in the more important cities of the Western world. Its rise thought, took a few decades of intense work and massive funding.

Talking about magazines promoting worldviews –not organically, of course, but artificially through covert funding and detailed calculation- perhaps one of the most prominent C.I.A.-funded publications ever made was Encounter… 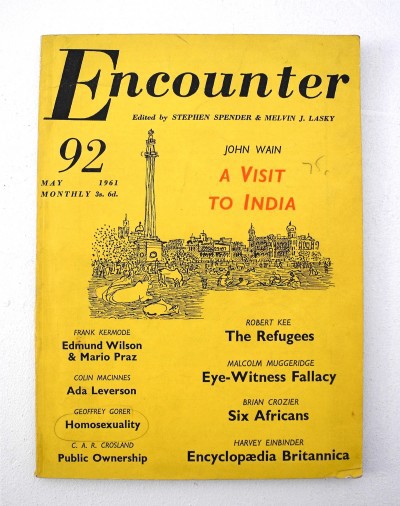 According to Patrick Iber, in his ranking of Literary Magazines for Socialists Funded by the C.I.A. the magazine is credited with “helping shift the British intellectual scene away from socialism and towards an ‘Atlantic’, pro-U.S. outlook”.

Wikipedia quotes Frances Stonor Saunders, who explains that Encounter was created when the MI-6 and the C.I.A.

…discussed the founding of an ‘Anglo-American left-of-center publication’ intended to counter the idea of cold war neutralism. The magazine was rarely critical of American foreign policy, but beyond this editors had considerable publishing freedom.

You are either with us… or against us. As Susan George explains throughout her work as a political writer, millions of dollars were poured during the decades after the Second World War into creating think tanks, and give grants to elite students and intellectuals.

With the aim of spreading ideas contrary to the New Deal and the welfare state, a huge “fraternity” of powerful men with shared interests **–status quo and unlimited profits being probably the most important- **built a huge network of ideologues and propagandists that would flood a welcoming mainstream media with their “non-ideology”: Neoliberalism.

Many of the grantees saw themselves –ironically- as rebels and anti-establishment figures, despite the fact of working for the rich. Many of them, of course, were glad to be fighting communism and protecting what they saw as the American way of life.

All this while opposing a monstrous and unfair government –purportedly not in the hands of the same elites- ready to despoil their patrons from their wealth and give it to the always underserving and confused masses of disenfranchised people.

Their patrons were: Coors, Mellon, Olin, among many other “philanthropists”.

George names a few of this influential think tanks (it’s a gross understatement to say that those who determine government policy are only influential):

The American Enterprise Institute. Some of the most prominent members are Dick Cheney, Paul Wolfowitz and Donald Rumsfeld, among a dozen of AEI staff members who shaped George W. Bush foreign policy, meaning the criminal rape and destruction of Iraq, under false pretenses.

In 2007, the Exxon-Mobile-funded think tank ($ 1.6 million) offered the insulting sum of $ 10, 000 dollars a piece to a group of British and American scientists to contest the findings of the UN’s Intergovernmental Panel on Climate Change. 1

Among their historical figures, we also find Irving Kristol, a.k.a. “the Father of neo-conservatism” and editor for Encounter magazine, referred above. Small world. 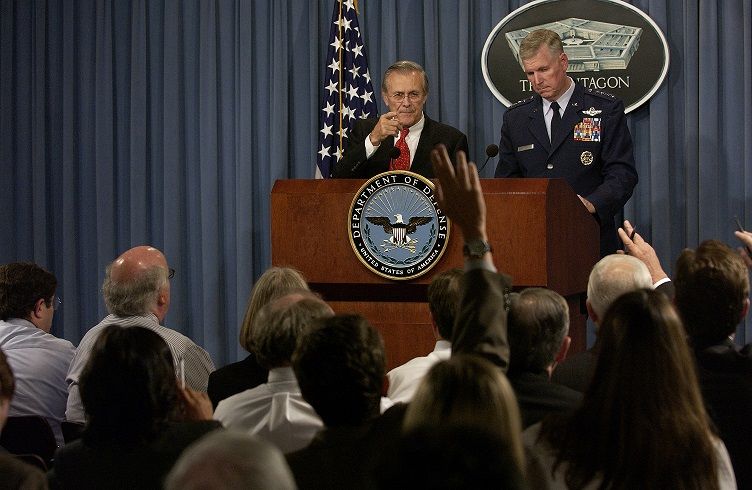 Reports that say that something hasn't happened are always interesting to me, because as we know, there are known knowns; there are things we know we know. We also know there are known unknowns; that is to say we know there are some things we do not know. But there are also unknown unknowns – the ones we don't know we don't know. And if one looks throughout the history of our country and other free countries, it is the latter category that tend to be the difficult ones.

Today, the AEI’s warmongers are pushing for war against the “the terrorist sponsor state”, called Iran.

The Heritage Foundation. Created in 1973, one of its major successes was to publish the report Mandate for Leadership, aimed at directing foreign policy and government in a conservative direction. 60% of its 2000 “suggestions” were implemented or initiated during Reagan’s first year as President. 3 Quite a mandate indeed.

They also pushed for what is known today as the Reagan Doctrine. Basically, providing military support for the Contras and other paramilitary structures to fight against nationalist governments, many of them democratically elected but mistaken in their ideas of sovereignty and social development… Some of its members “were key actors in these conflicts, visiting the front lines to provide political and military guidance to Savimbi in Angola and the contra leadership”, according to researcher Erica Payne. 4

The Heritage Foundation also funds many other smaller foundations and think tanks, among them the Manhattan Institute for Policy Research, directed by William Casey before he became the C.I.A.’s Director under Reagan. The institute is also famous for pushing for the dismantling of social programs, widely known for promoting laziness and irresponsibility among minorities.

One of its former members, David Frum, left the HF to become George W. Bush's speechwriter (ventriloquist). To him we owe the term “Axis of Evil”, kind of a rehash of the “Evil Empire”, also concocted by the Heritage Foundation for Reagan.5

Did G.W.B. came out with the “Bad Guys” rhetoric all by himself? We'll never know. NOT the “bad guys”. source

To end this post, let’s share an exemplary piece of Psychological Warfare from Susan George’s How to win the war of ideas, what the Nazis called Weltanschauungskrieg, literally Worldview warfare. 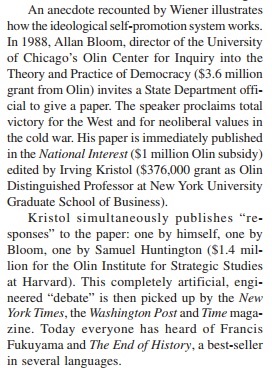 With governments and the media, everything is never as it seems. Damian Marley once sang, "If you're over ten and you watch CNN and believe everything / You're into deep." Lovely article.

Thanks... nice you should mention reggae. It's one of my favorite genres because of their lyrics, particularly Midnite and Steel Pulse.

The @OriginalWorks bot has determined this post by @homerus to be original material and upvoted it!

Curated for #informationwar (by @openparadigm)
Relevance:

Congratulations @homerus! You have completed some achievement on Steemit and have been rewarded with new badge(s) :