True #MomLife Moment: My 7 year old's Rude, Embarrassing Behavior + How I Dealt With It

So, my 7 year old has been having an attitude for a while now. Being my "mini me," I know exactly where he gets it from...but that is not the point! His behavior reached my boiling point earlier this week so we had a serious discussion about it... 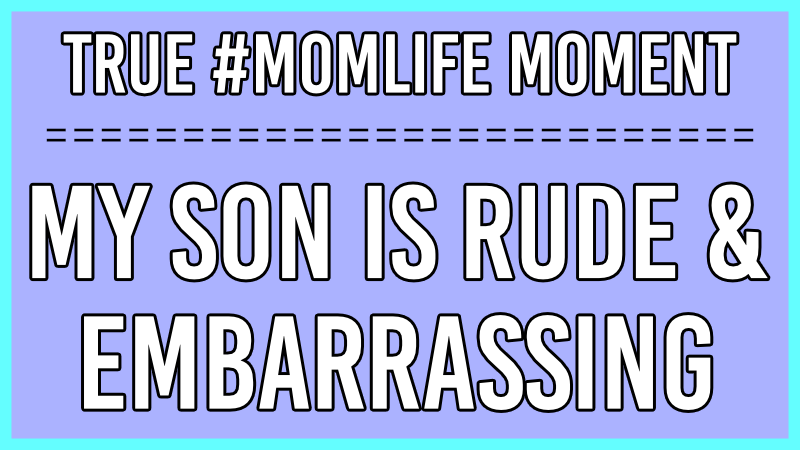 A couple days ago, we took both boys to a local karate studio. The 4 year old has been excited to begin taking lessons for the last couple months, but the 7 year old was on the fence. The owner suggested we come by to watch a class to see how each boy likes it.

Before we made it there, my oldest decided he didn't want to do karate -- no way, no how, never, ever. That was the attitude he was going into the studio with that afternoon. My youngest, however, was ready to see what goes on inside a karate class. He was sitting on the floor watching all the students warm up and practice their form. When the 7 year old started distracting his younger brother rather than sitting and watching, I could feel my blood pressure rising.

At one point, both boys were over at the stacks of padded shields, hiding out in between them like they were a big fort. I called them both back over to us and the instructor who was explaining what typically happened in a "Ranger" class, as that's the one my 4 year old would start in.

"Well, I'm bored!" my 7 year old shouted, crossing his arms. His attitude just got more negative from there. Eventually, the instructor asked if they wanted to do some shadow fighting, which is basically pretending to fight with no contact. The boys put on boxing style gloves and had fun on the mats for about 15 minutes toward the end of the class.

As soon as it was time to put the gloves away, my 7 year old's bad mood had returned.

Even though we still needed to chat with the secretary regarding pricing for both boys. By the time we left there, I was not feeling so hot myself. I was annoyed with both boys behavior, but really my oldest because he instigated most of it.

When we got home, we had a huge heart-to-heart. I raised my voice, which I try NOT to do, but I was just so tired of his attitude. I tried to keep myself in check as I expressed my frustrations....but was probably was a little harsh at times.

I know my intelligent 7 year old gets it though, and knows he should not act the way he does. I guess knowing that he knows how to behave (his teacher swears he's an angel at school) is really what sets me off when we get out in public with him and he's rude and embarrassing. Both of us shed some tears. We discussed different punishments, since being grounded or getting toys/privileges taken away were not working. He didn't want to lose access to electronics or sit in his room every day after school with nothing to play with.

In the end, he apologized for his behavior and promised to work on being happier. Being more open and giving things a chance before saying, "I can't do that!" or "No, I don't want to do that!" Working on his attitude and not shouting negative and/or rude things in public.

After all that negative talk and thinking, he's now says he's looking forward to doing karate too. I NEVER want to force either child to do it, or anything else they do not want to do, but I do like to see them trying new things. They will both be starting a 2-week intro to karate next week. If they don't like it after that, they are free to stop going after that.

Hopefully this talk really drove home how unhappy I was with his behavior and that he was going to start getting into REAL trouble for acting the way he does sometimes. He's a very smart and sweet boy, and I don't like to see him acting sour!

Wow! Yes, even my 7-year-old has days like that - though she tends to hide under the table, but she can't always do that.

You know how, back in school, there was this ONE class, every four years who were just like that?! My older cousin was in one of those years - with a much higher drop-out rate than what was normal in our community. My youngest brother was in one, one of my younger (ADHD) cousins...

My older cousin was one of the bright stars of his class.
My brother didn't go to college, but began his own, very successful DJ business - and now works with some big names for sound production.
My younger cousin was the best adjusted out of a difficult family, now has kids and a job and is very much a great person! These classes weren't necessarily hard, just "different."

And someone who cares as much as you obviously do, you'll bring up a healthy, happy young man yet!

No worries, I love thorough comments :) He has been much better since our chat. I hope he's realizing that his attitude affects us, as his parents.

I'm so glad he is being better.

Whew! I guess our sons must meet and learn from each other. He is 8 and could turn up stubborn too, especially on things he does not find amusing. He gets "bored". Huhu.

Haha, yes, they can be "bored" together! At least then neither would have to be entertained, since they would have each other. :)

Boredom, I guess kids get that way sometime, although I really don't remember that happening to me, most of the time I was busy as a kid, and did not want to stop what I was doing, that is when I would get in trouble.

It seems as though your chat has worked for him, I bet he really enjoys the karate lessons.

Yes, my son is like that too. If he's occupied, he will be very well behaved. The moment he's not being entertained, however, is when he gets more mischievous.

That embarrassment is so hard to deal with as a parent. I get it. Glad you had a good talk.

It's interesting how different my kids are. I have one that never ever acted that way, and two that do regularly.

I guess we are lucky that we got 2 for 2 here, huh? :D The 4 year old is just in the stage where he's testing limits and pushing buttons. My 7 year old, though, I feel he's too old and understanding to still act this way!

I struggle with my niece's attitude at the moment. She has no zest for life and is so negative about everything. If a smile dawns her lips I am surprised and I never knew what my father meant when he said wipe that look off your face until I saw it on my nieces. lol. Good luck with the change in attitude. My niece is now 12, we are hoping for a change at 15 but she is a late bloomer in a lot of ways so it could be 16 lol. I was so glad I was having a boy but now I am scared about that too lol.

I still think that boys are easier than girls....haha. I mean, both genders come with their sets of struggles and difficulties, but my husband's brother has all girls - 2 of his own, 2 stepdaughters. They are all older than our boys, but gosh it seems like one of them (at least) always has some trouble and/or drama going on! :/ It's tough! It's so sad to see kids growing up negative. It really bothers me when my son gets in that mood. Hopefully he and your niece will soon outgrow it!

Fingers crossed for us both. LOL

@keciah - this is a great post. I've been there-done that! Sometimes they just act that way to get under your skin. Their actions are embarrassing to you now, just wait til they are older & embarrassed of you! Upvoted!

Oh yes, I believe my son sometimes acts this way because he knows I cannot stand it. I try so hard not to let it get to me, but in public it's just terrible! Haha, I know the embarrassment from me being in their presence will come soon enough! :)

Seems like you found the perfect answer to the problem. I have usually found that a serious one-to-one chat can have a miles better effect than shouting and screaming. Stay with it, you've got the teenage years to look forward to (!)

It must be something with 7 years olds (and every other age). Mine is an 'angel' at school too. We can but do our best to help them on their journey to adultdom.

It's hard when kid's are rude, but with guidance they learn. Your boys are lucky, you take the time to discuss it with them.