BLOCKCHAIN: The GOOD, The BAD & The UGLY

Bitcoin is the first thing which comes to everybody's mind when they hear the term 'Blockchain', since Bitcoin is the first application to be built on a blockchain. In simple terms, Blockchain is a chain of constantly growing blocks where each block is a container space which can be used to store any form of digital data. In this article i will try to cover The Good, The Bad & The Ugly side of Blockchain.

Actually there is no ugly side to Blockchain but the human's desire to do well can have an ugly side. Blockchain is currently the most trending technology in the world since last year. While many companies like IBM, Walmart & Samsung are actually experimenting and exploring the options in Blockchain technology, there are few companies which were simply using the term 'Blockchain' to boost their company values. More than half the people believed that Blockchain is the future but they absolutely had no idea on what is Blockchain. Below is one such company which never ventured into Blockchain technology but simply used this term to increase the stock value.

Prices fell sooner when Bitcoin went bearish from bullish. When people realized that the company wasn't doing anything in blockchain, their stock prices fell so low. Long Island Ice Tea Corp was later delisted from NASDAQ. 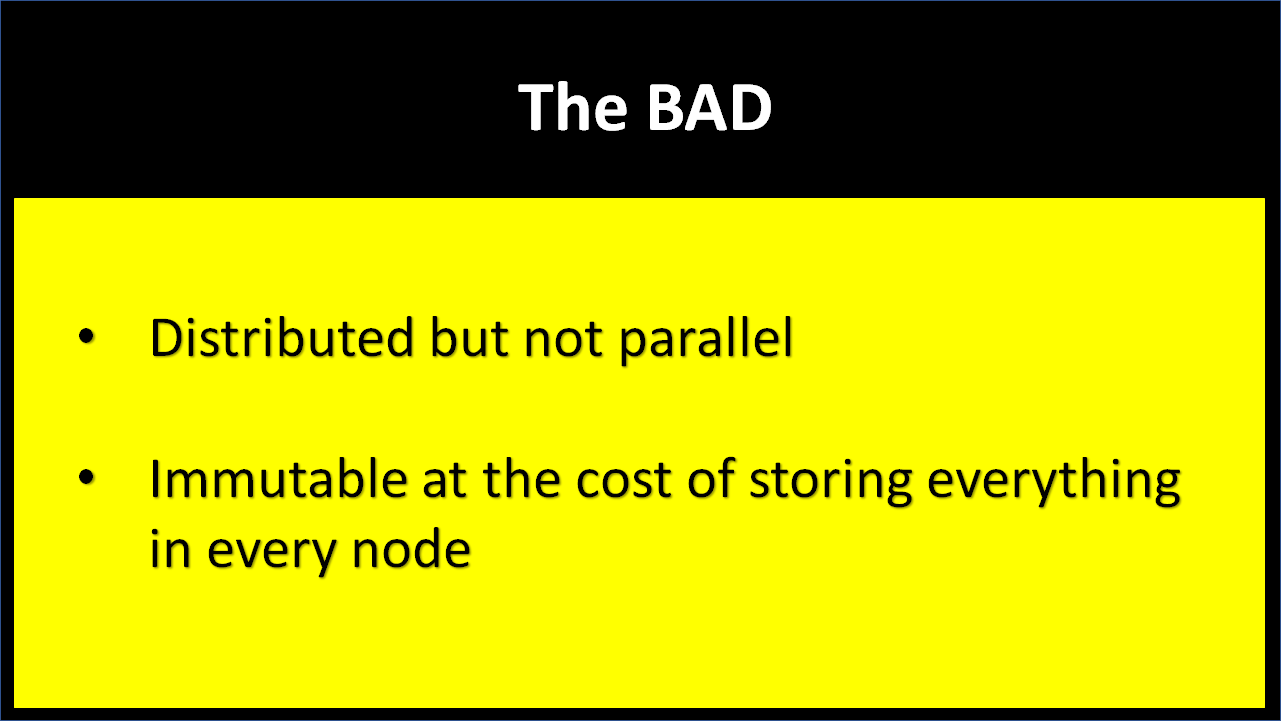 I guess now most of the people now understand what a Blockchain is and its characteristics. In this section i will go over the disadvantages of a blockchain because of its own characteristics.

Distributed ledger should not be confused with distributed computations or parallel processing. It simply means that the ledger is replicated in all the nodes of the network and the same job occurs redundantly in all the nodes. If there are 100 nodes in the network and X amount of work needs to be done, then each and every node needs to perform the X amount of work and not (1/100) of X work.

Blockchain is immutable because the entire ledger is stored in each and every node and it is difficult to hack into every node at the same time (It also uses hashing algorithm so it is quite impossible) . Though it is good from a security point of view, it is bad from storage perspective. If the blockchain adoption becomes mainstream then the storage space for the ledger will keep increasing at a higher rate. Which means that every computer in the network should have sufficient storage capacity to keep up with the ever-growing size of blockchain. Main selling points of a blockchain are

Every transaction is created, time-stamped and recorded in an immutable trail of blocks. If a new block needs to be tampered then the hacker's computational power needs to more than the computational power of rest of the nodes combined to create a 51% attack. Tampering an older block is even more difficult because the hash value of any block is stored in the previous block and hence a Blockchain is more trustable and secure than a ledger handled by a middleman like a traditional bank system.

Blockchain creates a transparent environment which is easility traceable. For example Lets say Walmart adopts blockchain platform, then every information pertaining to a product it sells will be maintained in blockchain. Meaning, the entire lifecycle of that product will be stored in the immutable blockchain. If we consider spinach as a sample product, then the details which will be stored in the blockchain will be: which vendors supplied the spinach; when was it farmed; who transported; who received; who verified; signed it; expiry etc... So literally by just scanning the product, a customer can get a whole lot of information.

If a system is transparent, traceable & secure then it is easier for the people to believe in such a system and trust the system.

Every technology has its own good and bad sides. I believe that the Blockchain makes sense for several streams in which one being retail industry where Trust-ability and Trace-ability is far more important than cost and speed.

In Sep 2006, there was a E. coli outbreak in spinach in which 199 people were infected including the 3 people who died and 31 who suffered from acute kidney failure because of the bacteria in it.

A month ago, E. coli food poisoning occurred in seven states which was linked partly to romaine lettuce in which 149 people were infected including 1 person who died and 17 who suffered from acute kidney failure which can be life-threatening.

In spite of this being a highest category of alert, Officials were not able to completely verify the source which is responsible for this contamination since there were multiple points of origin and distribution with no proper records. Since all these retailers and distributors records are centralized, one could easily tamper them to save themselves from the law. If these retailers and distributors were using blockchain then we would benefited by two things namely: Immediate traceability; Quality product with careful inspection because of the transparency and immutability. I will not say that Blockchain will revolutionize every industry, but blockchain should definitely be adopted in food industry where Trust, Transparency and Traceability is more important.

You are very right, The blockchain helps to solve inefficiencies in processes with technological incompatibility between systems of different entities / institutions, or of the mere bureaucracy that drags culturally of previously analogical processes. Lockchain is currently the most advanced technology in the world and it will do so For a long time. In order for a blockchain to get the favor of its participants, they must be able to scrutinize its internal functioning. Of course, there are other nuances of the blockchain, and I certainly encourage you to read about them. But when it comes to the essential, we are talking about a new way of sending money without banks, as well as of storing data in a transparent and immutable way. It's that easy.

you are making it sound so easy :-) Blockchain adaptation is not so easy atleast at this point. But i'm hopeful that the adaptation will become easy soon and every industry will start using this blockchain platform. Thank you for your comments @adrianav

It is right every technology has advantages and disadvantages. At last it depends on the extent of use of people who adapt technology.
To conclude, blockchain is trending at present and tampered proof but still lot of inefficiencies in processes with technological incompatibility need to be solve.

i'm sure that the upcoming upgrades will resolve some of the current inefficiencies. Many teams are working on techniques like Pruning & Sharding. So lets hope that future will be good :-)

I would love to hear your views on my post concerning STEEM 1.0
I am trying to get as much people as I can in the discussion. Thanks.
https://steemit.com/steem/@kayyam09/steem-finally-on-its-way-out-of-beta-steem-1-0

For a total calculated value of $103 STU, $181 USD before curation, with approx. $26 USD curation being earned by the paid voters.

This is a refreshing take on blockchain. Well done. First time I will learn of blockchain in the food industry. Makes sense, though.

thank you for your comments @sahmadou

Congratulation ramsteem! Your post has appeared on the hot page after 1min with 3 votes.

that was an interesting post. Armpack was actually new to me. thanks for sharing the post @jorgebgt

That's like everything, it has its good sides as bad, in the end that depends on the person who uses it

Welcome to the future, folks!

Good job on article @ramsteem, that is one of the best summaries of blockchain I have ever read. You showed the sides of blockchain with objective perspective, loved to read. Looking forward for your next posts :)

Congratulations @ramsteem! You have received a personal award!

Congratulations @ramsteem! You have completed the following achievement on the Steem blockchain and have been rewarded with new badge(s) : Congratulations @ramsteem!
You raised your level and are now a Minnow!