The rare species of crab caught in the sea 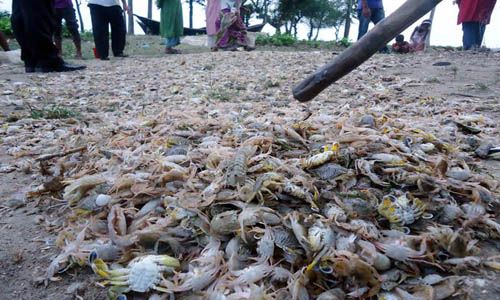 Barely extinct species of crab is being caught in the trap of fishermen in river-river along the Bay of Bengal along with the Bay of Bengal in Kalapara upazila of Patuakhali. Although locals call it Tiger Crab, it is also known as Flower Crab, Blue Amrit Crab or Sand Crab. Whose scientific name is Portunus pelagicus Thousands of crab fishermen are caught in the net by one / half inch size, the fishermen can not sell them, they are making fish food by drying them in the pies. Suddenly the rare species of this crabs are caught in the sea and rivers, environmentalists claim to take urgent interest in preventing crab and protecting the species.

Turning around in the field, the dark brown crab on this brown-colored ribbon black strips like a tiger. There are two holes of one inch in size to protect themselves on both sides of the shell. Mother crab body is light yellow or light brown, and its body is rough round and male crab body is bright blue and small white spots. The crabs caught in the quadrangle are the male breed of blue-swimmer crab.

According to the Kalapara Fisheries Department, the cultivation of various varieties of crab and seen in Bangladesh, Flower Crab or Tiger Crab was seen almost half a century ago. This species of crab is seen in the coast of the Indian Ocean and the Mediterranean Sea, Southeast Asia, Australia, and the coast of the Persian Sea, but this species of crab is not seen anymore. However, in some areas of the Sundarbans, some crabs are seen in this season.

It is known that these tiger species come near the coast to leave the crab sea. The liver of the egg comes to the coast by the tide of the sea. Small crab wanders near the coast until adulthood in deep sea. These are adults in 18-24 months. If it is mature, it can be 350 grams - up to six grams.

Various areas of Kalapara can be seen, hundreds of workers are working to dry this crabs. They were hunted like crabs after being divided into 5-7 groups per day. Each group consumes at least 2-3 crows of crabs every day and it is drying up in the sand.

Crab drying job Sohel Under his leadership, 30 people in this group crabs are drying. He said, this crab is caught in the fishermen's net within 2 to 3 kilometers of the sea. 10-15 workers are working to pick up the small crab with more fish in the net. Although this crab is sold separately from the fish, the crab is not sold, because it is drying up the fish and making fish food. The counterfeit scraps are sold at local market at Tk.13-12.

Aklima Begum, who was involved in the process of picking crab, said that she was wearing a scarf. Jamai, Polarra Hogaldi Jaila. But I do not even have these skulls in the year. Sundar I do not want to kill But what will be the shivers? Hey

Fisherman Ibrahim Mia said, 'Many earrings are caught in the trap before. At some time, we got kimar / five moles. I do not even have these peacocks in my life. It seems that foreign crab. Katharagula like a leopard tiger So they called the Tiger Kangra '.

Saudur Rahman, Anjali Mandal and Aritra Debnath, tourists traveling to Kuakata, Kuakata, tourism center on natural beauty and extinct biodiversity. But just because of the need for livelihood, it is a terrible thing to destroy the marine creatures in the name of hunting fish and the net lattice and net netting. Because hundreds of different species of fish are being killed daily in the name of shrimp ponora. And now the destruction is the extinct species of this Flower Crab. These crabs they saw in Australia Beach. The measures should be taken to stop these killings now.

Kalapara Senior Fisheries Officer. Kamrul Islam said, there are very rare and valuable species of scratched crabs here. Although these crabs are not seen in Bangladesh, they are found in some areas of Africa, Southeast Asia, Australia, and the coast of the Persian Sea, along the coast of the Mediterranean Sea. This variety of crab is widely regarded as food in the Indo-Pacific region. In Asia and Persia, there are also many food needs of this crab. Mother crab prices are more than male crab. But there is no law about catching this crabs, they can not do anything. However, their campaign continues to be so that they can not be hunted by a net leak or carry net.

You got an upvote, so it would be a nice gesture to follow this account for more upvotes in the future 👊🏼

Here are a few ways to support @duplibot and help reduce spam and superfluous comments.