Hong Kong Phooey and Muxxley arrived in Wildermire right as the deadline arrived. They had met and befriended Inspector Scootadget although Hong Kong Phooey had just realised nobody other than Muxxley understood what he was saying. In his head he was talking but to humans he was barking.

What a giant pain in the arse this was going to be! The next part of the mission had been communicated but with no reading ability the heroic pooches were forced to act upon instinct. Hong Kong Phooey had hung around listening to Inspector Scootadget while he had read the message and had got the gist.
The message from Julia Sorceress had read......... 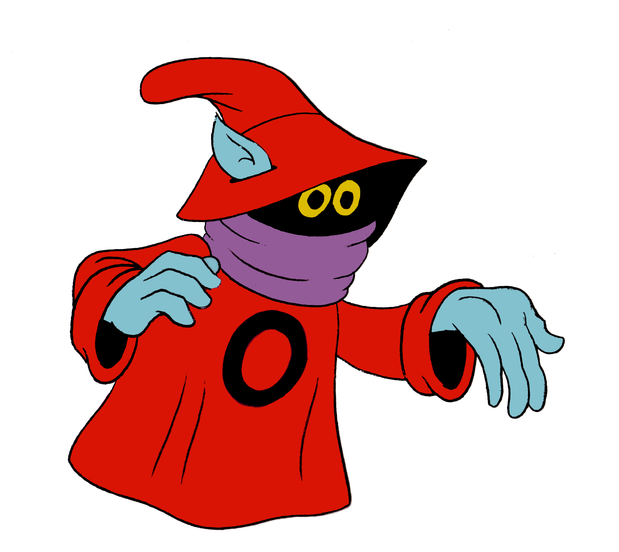 In Wildmere, find Orko. For one token each he will show you how to navigate the Vine Jungle safely so that you can reach Gorthlindir. If you don’t have a token you will need to make your own way there, watching out for Beast Man and his friends the Snake Men.

That seemed simple enough and the thought of having to defeat more enemies has brought forth a primal instinct in both Hong Kong Phooey and Muxxley.

They both relished the physical challenges and decided they both enjoyed killing people! It would appear they were both happy for extreme violence to ensue. Upon entering Gorthlindir, you will need to search the temples and pyramids for King Stratos and the Egg of Avion. Watch out for traps and mazes that are difficult to escape from. They have been set by Entrapa and Evil Lyn who are keeping the King Stratos captive. Look out for your fellow heroes. They may need your help.

You have seven days to complete this mission.

"Ok Muxxley, let's hit the road. We've got a fairly long journey ahead and I want us to find this Orko before the others."

"Medal, medal." was the reply.

"Jeez Muxxley, is that all you think about? Oh alright then, you did a great job finishing off that Mosquitor fella so I guess you've earned it. Great move biting his nuts off by the way."

"Julia Sorceress sent us these tokens for getting here in time and defeating Mosquitor so I guess one of them is yours, I'm keeping the other one though as we'll need it to give to Orko for his help." 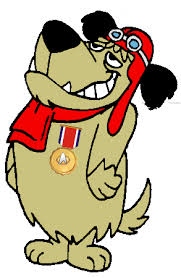 With the medal pinned firmly on his chest, Muxxley was ready to depart but not before he'd spent 10 minutes dragging his arse along the grass trying to remove a particularly persistent tape worm!

They headed off in the direction that smelled right, they still had the map but it wasn't much help to them. Instinct had gotten them this far and they trusted they were on the right path. They were both thinking of the battles ahead.

Julia Sorceress had mentioned that Beastman and the Snake Men were waiting to ambush them however they didn't care in fact the opposite was true. They wanted these minions of Skeletor to ambush them, they had a blood lust now that was powerful and all consuming. Killing them would be a pleasure.

Muxxley stopped and sniffed the air.

"Someone is on the path up ahead." he said.

Hong Kong Phooey had a sniff too and decided Muxxley was right, but was it friend or foe?
They crept cautiously along keeping to the edge of the path in order to not be spotted approaching, if it was foe then a surprise attack would be the order of the day. Suddenly a voice whispered from behind them.

Hong Kong Phooey and Muxxley spun around with the intention of utterly destroying the owner of the voice but were stopped in their tracks when they saw the big 'O' on the tunic the stranger was wearing. Instantly they knew they had found Orko.

The Canine chums followed the mysterious Orca away from the path and after a few minutes of walking in silence they stopped to talk.

"Do you have the token? Orko enquired.

Hong Kong Phooey passed the silver token to Orko who slipped it into his pocket.

"You can speak, I understand the dog language." Orko said.

"That's a relief, its been a frustrating few days since we came through the portal. I spoke to Inspector Scootadget earlier and he just looked at me like I was an idiot. A least we got to hear the message about finding you. Are you going to guide through the vine jungle?"

"I will but we need to leave right now. Beastman is around here somewhere and he's a savage." The scream was deafening and took the three of them by surprise.

However the two 'dogs of war' had been waiting for this all day. Beastman may be a scary looking bastard but neither Hong Kong Phooey nor Muxxley hesitated, they glanced at each other for a split second and launched into a similtaneous brutal assault.
Hong Kong Phooey went high as Muxxley went low. Muxxley launched himself at Beastman's crotch, sinking his razor sharp teeth into the ugly creatures meat and two veg!

"Yeah! You like that do ya? shouted Hong Kong Phooey as he threw himself into an epic flying drop kick, catching Beastman square in the face.

Beastman staggered backwards in agony as Muxxley spat his junk out onto floor.

""Hehehehe." he laughed, clearly enjoying himself.

Hiding close by, the Snakemen watched in horror. They'd been told to join in if needed however the brutal spanking Beastman was now receiving in front of them gave them pause for thought.
The four at them looked at each other not knowing what to do, after ten seconds they they made a tactical decision.

"Fuck thisssssss!" they hissed in unison and slithered off into the night. Not one of them looked back to see the 'Scorsese style' kicking Beastman was now receiving from the two increasingly insane doggy warriors. 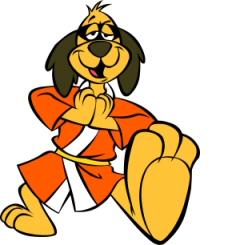 Beastman was a spent force but Hong Kong Phooey wasn't finished with him yet. He wanted to send a message to Skeletor and his forces of evil and the best way to do that was to show no mercy to any of his men.
Image Source
The master of the 'Doggy Style' walked over to Beastman as he laid on the floor breathing his last breath. As Beastman looked up he could see the insane look in Hong Kong Phooey's eyes.

"Take that cunt!" he said as he stamped on Beastman's face......Twice!

Orko was in a bit of a state when Hong Kong Phooey and Muxxley were finished with Beastman. He was sitting down hugging his knees rocking back and forth.

"Oi! Snap out of it Orko, we need to get through the vine forest to Gorthlindir as soon as possible."

Relunctantly Orko stood up and needed to steady himself before they go going. He didn't think he'd ever be able to close his eyes again without visualising the scene he'd just witnessed. He was going to need a shit load of therapy!

They made their way through the vine forest for two days, the trek was hard and disappointingly uneventful for the mad mutts. On the morning of the third day Orko spoke for the first time in 56hrs.

"We're here." he pointed. "Look."
From where they stood the city of Gorthlindir was spectacular. 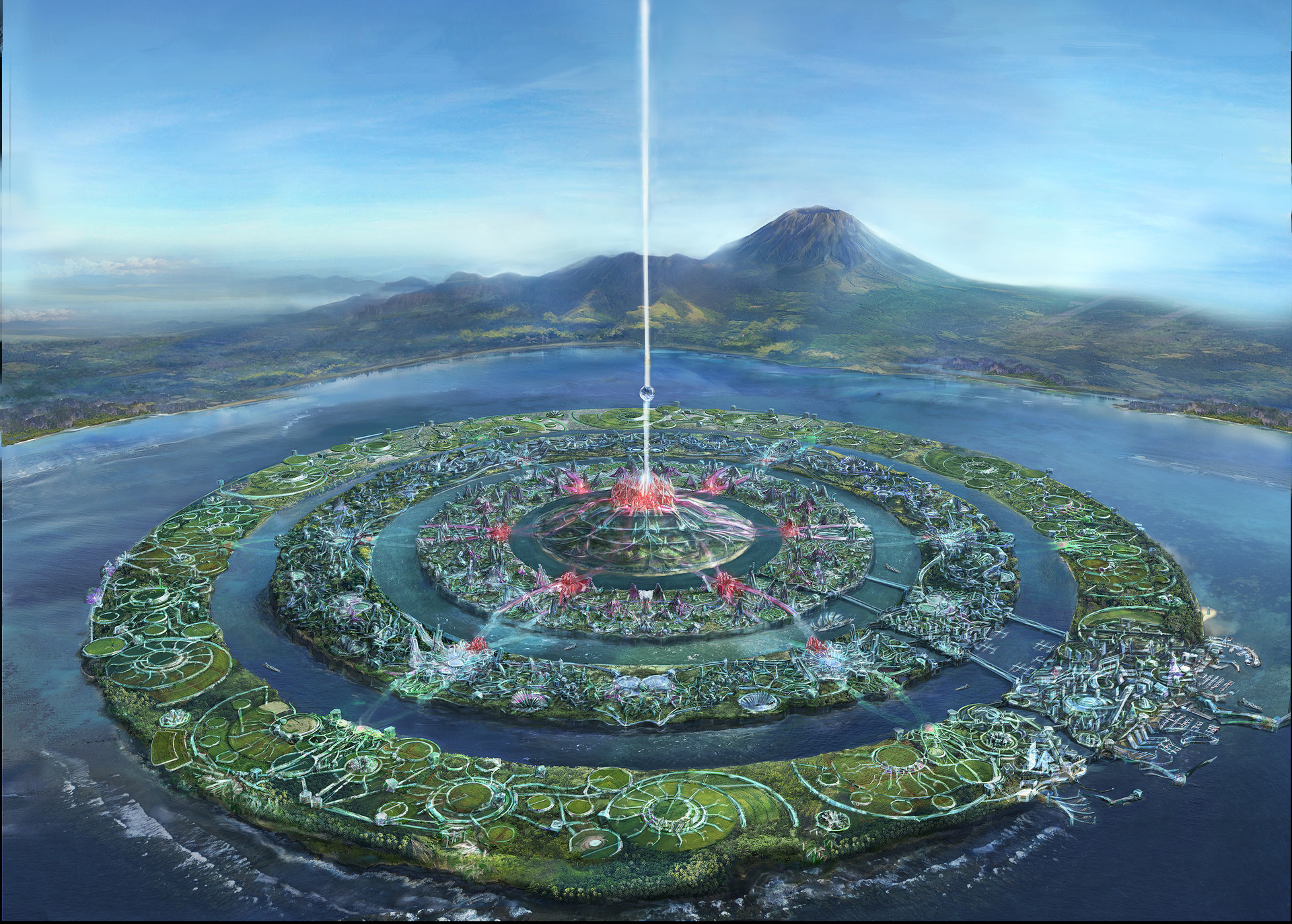 Come back soon for the next episode to see what Hong Kong Phooey and Muxxley do next in..........

Thank you for visiting, for more please come back to @tremendospercy or alternatively check me out at Steemshelves
All MOTU maps and Images by the amazing @bearone
Proud member and supporter of the Minowsupportproject, please go to discord and start your journey.

Haha Mate that was just the laugh I needed!! Just when I think the story can't get any funnier or crazier you ratchet it up another notch .. or two! lol Fuck knows where it's going to go next, but as long as you keep this magical mystery tour of madness and mayhem on the road, count me along for the ride! Great stuff dude, perfect way to round off a long day :D

Awesome mate, I'm glad you enjoyed it.
I'm exploring the darker side of my dog persona. The Eternian landscape is going to be littered with the fetid corpses of Skeletors evil hoard.
Bring on the slaughter! 😉

We are rocking this one.

Yes my doggy friend, we're gonna leave a trail of corpses in this quest.

10 minutes dragging his arse along the grass! Can't wait for the next instalment dudeski, awesome.

Thanks man, being in the mind of a dog is great fun, especially a psycho dog 😂

Yeah, he's never going to be the same again. Those who seek his help in future will need to give him councelling first. 😂

Yes but his name is Orco you're ruining my childhood TP lololololol!!

Damn! Did I spell it wrong?

Edited, thanks babe. What a twunt! 😂

HAHAA I didn't know if it was intentional because you do like to change names, I didn't know if there was a Steemian out there with Orca in their name or something. You know I'm the biggest HeMan Nerd there is!! I have watched every episode many many times and subjected my children to it as well hahahaa!!

PS: I thought you were going to do something way more creepy and awful to Beastman hahahaha well played, well played...

Oh very nice Percy. I love that he just barks so no one can understand him. You've got the dog characteristics down pat!

Thanks babe. No need to worry about Beastman on your journey he's proper dead. You may come across his disfigured carcass though. 😂

oh my! Sending meds to Muxxley for those nasty tapes, lol! Beastman didn't have a chance against those too mad pups. Remind me to stay on their good side! Action packed adventure, for sure and another awesome insallment. Resteemed.

Cheers Janelle ❤️
Haha, yeah I think Muxxley needs worming tablets 😂
They're definitely the Mickey and Mallory of the canine world. More insanity is on the way.

He's a mad dog for sure.

BRUTALLLLLL The "remove a particularly persistent tape worm!" Made spit out my coffee in laughter!
More more more
I can't to find out what will happen next!

More insane canine capers will be forthcoming next week babe.

This wonderful post has received a bellyrub 12.60 % upvote from @bellyrub thanks to this cool cat: @tremendospercy. My pops @zeartul is one of your top steemit witness, if you like my bellyrubs please go vote for him, if you love what he is doing vote for this comment as well. This post has received a 8.03 % upvote from @booster thanks to: @tremendospercy.

Enjoyed reading it. If the tape worm is also a ring worm then some sand paper may help in the removal.

Thanks for the excellent submit! @tremendospercy

That was pretty violent, looks like you are sending quite the message to skelator...

It should have his evil hoards quaking in their boots 😂