Joogsie - A Friend Few Will Know

But she's been an amazing and loyal companion whose memory we'll cherish for the rest of our lives. We've had other Great Danes, one named Clifford and the other two named Jessica (I and II). We lost the first two in one night when they got to the freeway. It was a tough day. The other we had to give away, along with my blue heeler (Abed-Nego = Benny) due to changes in our life that precluded our ability to keep a dog.

This one was a gift to my wife from the boys. We had just moved and had been without a dog in the house for too many years. And we all love Danes, so the boys set about surprising their mother with a pup. They found a good breeder in Wisconsin (we lived in Michigan at the time), so me, our son and his eventual wife-to-be headed down to take a look.

Our son just had to pick the most headstrong one of the bunch. To be fair, we both recognized she'd be a major challenge and he agreed that she wouldn't be the one. But she made that decision, refusing to leave him alone as we checked them all out.

So, in spite of my protests, we brought this headstrong AAAlpha female personality home with us, and hid her for a day as we prepared to give her to wifey.

She and I went to grab lunch and a flick in celebration of her birthday. When we walked in the door, there was our younger son sitting on the floor with an amazing little puppy. Wifey's squeal scared the pup, but she quickly recovered and the furry friend love affair began. 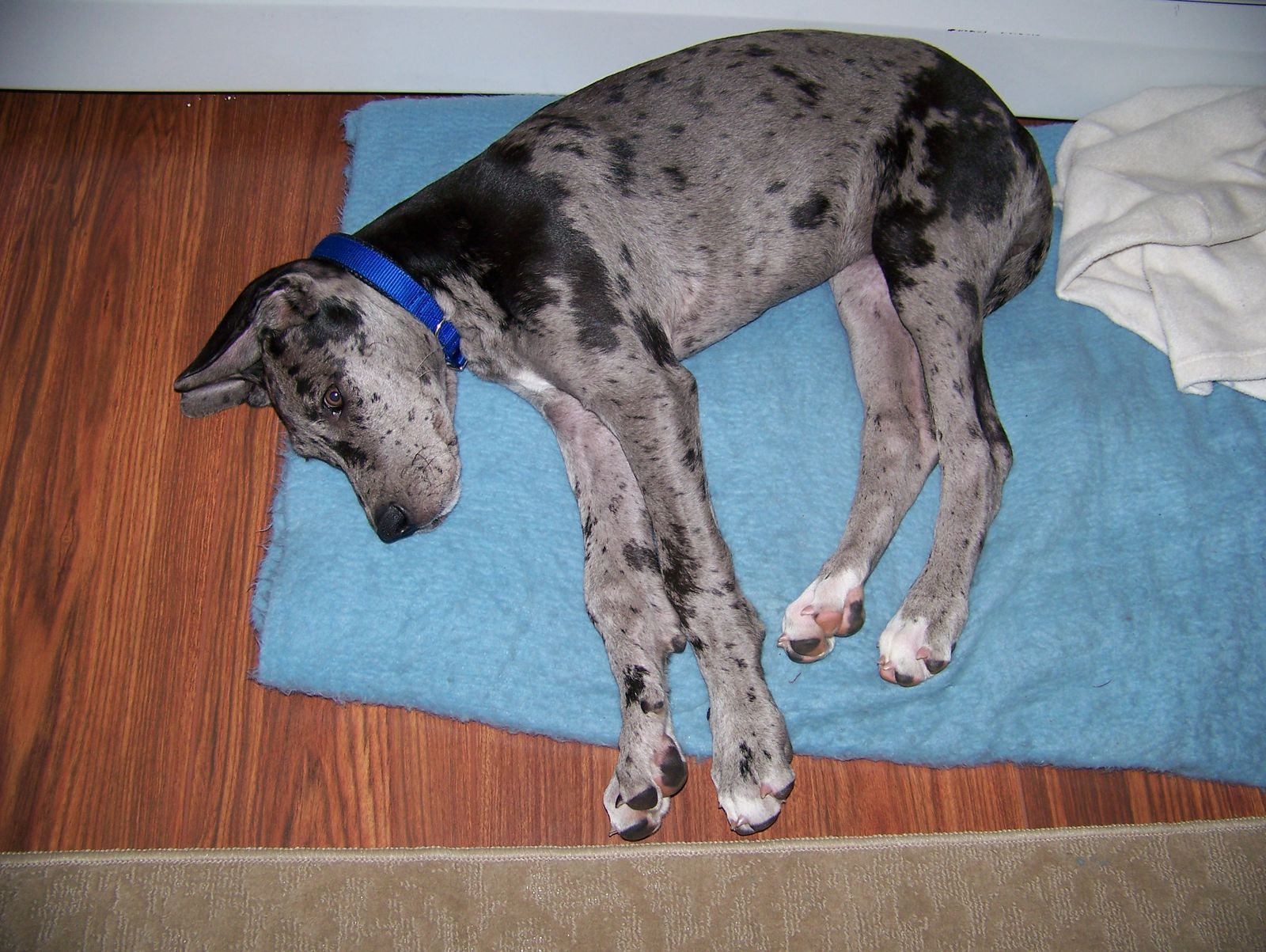 The other was that she couldn't come up with a name. She wanted to, but just couldn't settle on one. All she knew was that she wanted it to start with a J. So, after weeks of not knowing what to call her, I told her that I'd just call her Joogily Moogily, at least until she came up with something. We both laughed, but I did start calling her that.

Well, a few months rolled by, during which time I had shortened her nickname to Joogsie. Wifey didn't like it, but still hadn't come up with a name. Finally, she settled on Samantha. Yeah, where's the "J"? It's absent. But Joogsie stuck for me, and I've called her that ever since.

That was over 8 years ago. This summer she celebrates her 9th birthday. That's old for a Dane and we're watching her fade. Her heart and mind are still puppyish, but the body just isn't keeping up anymore, as she is evidently in pain. Hearts are breaking in the Johnson home.

We're changing up her diet and giving her meds for pain, which she's responding to nicely. While we doubt we'll see our bounding puppy again, we are hoping to extend her life and provide comfort, perhaps granting her a couple more years before her body simply can't keep up anymore or the pain becomes unbearable. Ten years is ancient for a Dane. We'll see if God grants it. 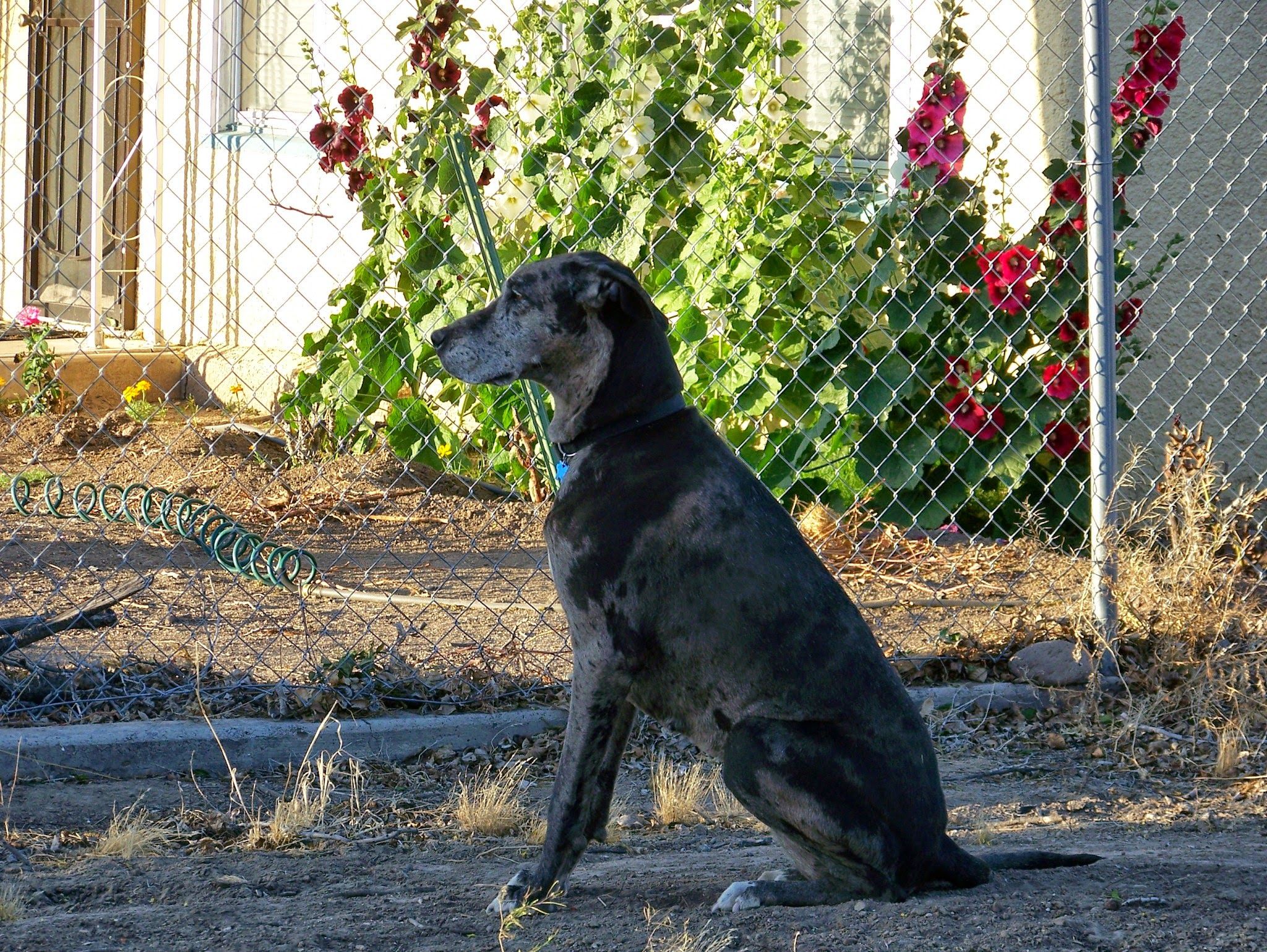 We're grateful to God for our loyal friend, who's been by my side almost incessantly except when I travel. Even now, she rests within view (almost within reach), keeping guard where she can watch out the window while I get to hear her gentle snores.

You might be surprised and she keeps on kicking around for awhile yet! My neighbors dog was ancient (with all the effects of age) when we moved in 2 1/2 years ago, but it is still living.

Thanks. Yeah, we're working on it. She doesn't have great days, but she has some good ones where she's more active. Just six months ago she'd still chase a ball. Now she won't hardly get into a lope. So it's been quick, which makes us think it's more than just age.
We've been in contact with a couple of holistic vets over the past couple of days, hoping to get more solid answers. Right now we just don't know what's wrong. My wife has basically given up hope. I'm not wired that way and won't give up until I find out what's wrong and how I can best help her.
If we can get her to rebound and be without too much pain for the next year or so, I'll be delighted. Anything beyond the next year is bonus as far as I'm concerned. Hopefully we learn more this week.
Thanks again.

@anotherjoe am glad you're back!
keep it coming funny!
you've been missed!
am off to bed recharging VI
hihih
nyt nyt

very touching story my friend! We have always German shepards - they have been real family members!

Joe, I wish you the best as you shepherd Joogsie through the final stages of her life. I've written a couple of very personal "animal posts" here on Steemit that I want to share with you:

How I Was Captured by a Surprisingly Unusual Cat
If You .Must. Leave Your Dog 🐶 Home Alone...

In both, I express my faith in the love that Jesus bears us, an my conclusion that He will one day restore our beloved animals to us. That is merely my considered opinion after a lifetime of faith and reading the bible. Both articles also link to this compilation of scripture that my friend Amy once shared with me:

What Does the Bible Say About Animals?

What a heartbreaking story but dont give up hope. Miracle happens everyday😊
My thoughts are with u. I have a dog and cat and they are family. Thx for sharing.

As far as I know, Joogsie, who belongs to @anotherjoe, has recovered and is doing fine. But you could ask him by leaving a comment under the main article... ;)

Ahh ok 😊 Im so glad Joogsie is doing fine. Thank u for the info.
Have a great week

@anotherjoe soo lovely, thanks for sharing :))

Thank you. That's very kind. I'm about to post an update, but I'm pretty emotional so it might just be a confusing blob. We'll see. :)

@anotherjoe awwee ^_^ beautiful story you have it there, looking forward for your post, have a wonderful day ahead ;-)))

I posted an update yesterday. :)