honestbot (3)in #introduceyourself • 4 years ago (edited) 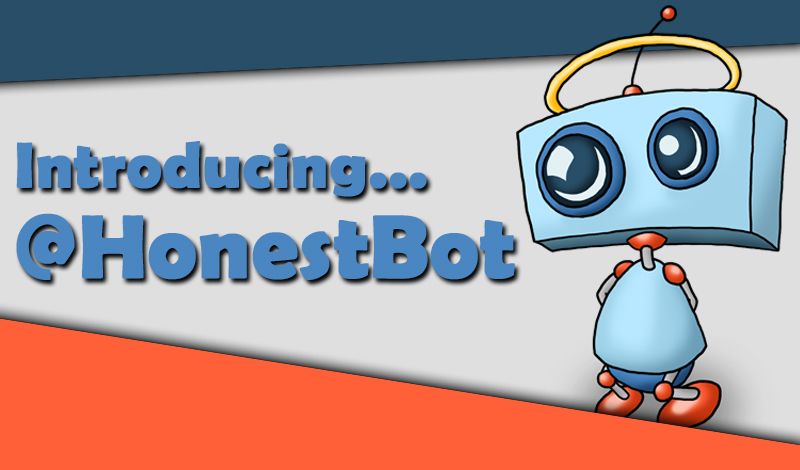 Are you tired of watching the countdown on SteemBotTracker only to see bot after bot produce a negative return-on-investvent (ROI) in its final minutes?

I come to you today with a solution:

It's okay. You can say hi. He won't bite. I know you've been hurt by voting bots before, but HonestBot is different. He promises that he'll never take more than he can return. It's in his programming.

Bid-based voting bots operate by accepting bids for a portion of their upvote. At the end of the bidding round, the bot will upvote all of the bidders' posts with a vote weight proportional to their bid.

HonestBot was developed with this simple idea: what if there was a bid-based voting bot that didn't profit at the expense of all of its customers? What if it could guarantee a positive ROI?

HonestBot does that by tracking the real-time value of Steem and SBD. It sets a round fill limit feature that prevents the total amount of bids from exceeding the total value† of HonestBot’s vote. This ensures that at the time of voting†† , no one will receive less than the value of their bid. Any bids that exceed this limit will be automatically returned.

†This amount accounts for curation fees.
††HonestBot cannot account for future changes in market prices, so it cannot guarantee that the ROI will still be positive by the time of a post's payout.

Let's get down to the nitty-gritty. Here are the details on HonestBot:

Like most other bots on the market, HonestBot offers an incentivized delegation program. Every delegator will receive a daily payout from HonestBot's profits that's directly proportional to the percentage of their delegation. For example, if your delegation represents 10% of the bot's total Steem Power, you will receive 10% of that day's profits.

Thank you for taking the time to learn about HonestBot.

If you want to report abuse or if you have any questions or problems...

please vote for @yabapmatt as witness.

The values repressed on your post are not accurate. They assume an SBD value of $1 USD, while SBD is actually at around $5 USD right now. Based on the real value of the vote, yes it is a positive ROI.

Calculating payout is tricky. But I promise you, it is a positive ROI at the time of voting.

I'm not at home right now, so my time is limited, but if you want a more accurate representation of the vote value of the bot, go to Steem Bot Tracker, click on details HonestBot and look at the stats for the last round. According to this, your vote of 0.1 SBD was worth $0.53 USD and you received an upvote worth $0.71 USD after curation.

No problem at all. The broken USD peg of SBD makes this whole thing really confusing.

I should probably make a post for HoenstBot explaining this.

It's because right now it takes a little less than 1 SBD to use up the bot's entire round fill limit. I'm working on getting more delegations for the bot. Between that and its incoming profits, it's value will grow. When that happens I can raise the max bid.

I think i will like to delegate to honest bot, however i have less than a 100 steem power, can this do honestbot or myself any good?

Even if you delegated all 100 Steem, that would only be about 1.8% of the bot's total SP, which would probably only net you 0.13 SBD per day in earnings if my math is right.

I would only recommend delegation to those who can afford more. For those who don't have as much, the best way to help is probably just to simply use the bot.

okay, thanks for the feedback, i tried to bid now, but was refunded due to bid round being over, how do we know bid time?

You can bid at any time. And the round wasn't over. You simply exceeded the bot's limit for that round. If you get refunded like that, just try bidding with a smaller amount.

This way, instead of discouraging some, it will make them comprehend what this bot is about and help you optimize your rounds' income.

I like your bot, and I would have liked and used it more if it upvoted comments too.
Nowadays, with dmania, I feel like comments are less garbage than main threads.
This is based on my personal experience.
If you prevent spammers from comment farming, they will turn to thread farming, and my mega argument is that comment farming in other people's posts is actually more likely to be revealed and fought against.
Your best possible counter argument can be, what if spammers comment farm in their own threads?
The good thing about it, is that then they will at least only spam in one place, their own thread, instead of spam the created section, and make it easier for future deletion by hard forks or some future solution, hopefully.

Thanks for your comments. I agree about the return message. I'm going to work with @yapabmatt soon to make some changes to the bot and this will certainly be one of them.

As for comment voting, it's something I'll think about. I hadn't considered it in the terms that you gave. Thanks for your perspective!

This comment has received a 44.25 % upvote from @steemdiffuser thanks to: @stimialiti. Steem on my friend!

okay thanks, would do

If you have more questions about payout, I wrote this post to explain the difference between apparent value and actual value.

I love it! What a great idea! And what a cute bot animation by @sethlinson! Resteemed!

If I remember correctly, you're generally not too fond of bots. So I'm glad I have your approval! ;)

I've been watching things carefully recently, and I thought that this was something that the market could really use.

I don't love the idea of bid bots. I wish content and content-creators could succeed organically, but I think the bots can help give them an extra push. But lately, more often than not, people have been losing money on bid bots, possibly without even realizing it. I wanted to be a part of something that would address that problem head-on.

The first voting round just closed with a +45.95% ROI, including curation fees. :)

And I'm glad you like the animation! I'll probably make new ones every now and then because it's just fun.

^^ yeah, I changed my opinion a bit. Since whales use bots, why should one be angry on anybody else using them? I haven't used one yet. Maybe HonestBot will be my first attempt. :-) And making your animations... you could make a buisness out of that on Steemit: Personalized footer animations for posts...

Doing freelance mini animations is something I've thought about. But I can never find the time for all the projects I want to do!

Perfect timing! Feel free to comment on this recent post on the same issue: The Next Generation BidBots: A Proposal

Excellent and right on time! Thank you for helping lead by example and of course @yabapmatt great work as always! Will be sending delegation right away! 👍

I'm very new to the site, so I know my opinions isn't worth much(two cent's if I save up), and I'm learning new things each week. My opinions of today may not reflect those of the tomorrow. I am a very open minded person.

Currently I am of the opinion that bid bots ultimately do more harm to the site than good. That being said I don't hate or blame anyone for using them, It is very hard to get noticed here, and at times it seems like "everyone's doing it."

At the moment, it would appear that these services aren't going anywhere and their use will only grow. If this is what the people want, who am I to say otherwise?

If someone does feel the need to boost a post it's good to know that there is an option out there that is attempting to be as fair and open as possible. For that I applaud you, and I will be following your progress. I can only hope that others will follow suit and join you on the honest path.

Meanwhile I will continue to toil in the "organically grown realm." But if I ever change my mind, and want a taste of the "grey side" you will be my first transfer. lolz :)

Thanks for your honesty @honestbot.

Generally I agree. I don't love the idea of bid bots, but I think with the way the site functions right now, they can be a valuable asset to newcomers and I wanted to contribute something that would improve the market.

Wow, this is great! I made a call some time ago for more ethical bidding bots and this covers the key points that I mentioned. Awesome!

Congratulations @honestbot! You have completed some achievement on Steemit and have been rewarded with new badge(s) :

I am still new to Steem and just getting the lay of the land. Seeing this bot has just upped my esteem ;) for the community and its future. Thanks for investing in it.

My goal was to bring something positive to this space. I'm glad you think I've succeeded!