This is the Kind of Lies I absolutely can't just pass unnoticed and unresponded - "Isreal Needs our Help????"

I'm copying here a response to the Post made by @interceptor about Israel and Palestine and how:

"People of Steemit should hear that cry, and dedicate some of their time for righteous fight, where Israel is heavy underdog, taking serious beating and without any friend who would help them against media beast".

He isn't joking! Israel "need our help", billions of dollars worth of money directly from US taxpayers (AIPAC) isn't enough I guess...

Here is my response:

I firmly believe that Palestinians are in a dire need of help... Israel? Not so much. Israel is a powerful nation among poor countries, with lobbying power in the US and a military force to support its policies. So let me ask you, can you give us any source for this claim you make:

Things are so bad, that every media, lead by mainstream media corporations, are pushing anti Israel, antisemitic, antihumanrights agenda, calling for destruction of Israel, ethnic cleansing, and allowance for terrorists to freely attack Israeli armed forces with knives and stones.

I'd love to see that.
You should quote sources. I'm pretty sure I can refute them. The video is just hilarious: min. 0:22, the narrator states that a reporter lied by saying the attacker was shot unarmed, and he was armed with a knife indeed. BUT THE(y) SHOT HIM IN THE BACK WHILE RUNNING AWAY, THAT'S MURDER ALL THE SAME, besides every time a palestinian "terrorist" little girl attacks anyone the response is she/he is gunned down by a heavy equiped soldier with a powerful rifle, body armor, etc. And the whole Israeli military apparatus to support him.

I don't know if you are just a completely indoctrinated ignorant saying what you believe is true or just another lier. Palestinians have been chased out of the land where they were born and massacred many times, then Israel cries because some "rocket" makes it to their protective walls.

How many Palestinians vs Israelis have died so far? What's the ratio and how do you interpret it?

You don't get to label anyone you dislike a "terrorist" and then proceed to excuse anything that is done to him because he/she was a "terrorist". The fact that they get to call others terrorist while being an aparthaid Terrorist state only shows how powerful they are and how well they lobby and dominate mainstream media.

Finally, your point of view is 100% biased and completely unfair to the suffering of people you don't identify with.

Here is a picture of the organization you quoted, who claim to fight "bias"... right. How many Palestinians or not-zionists are working there to make it not totally biased in favour of Israel? 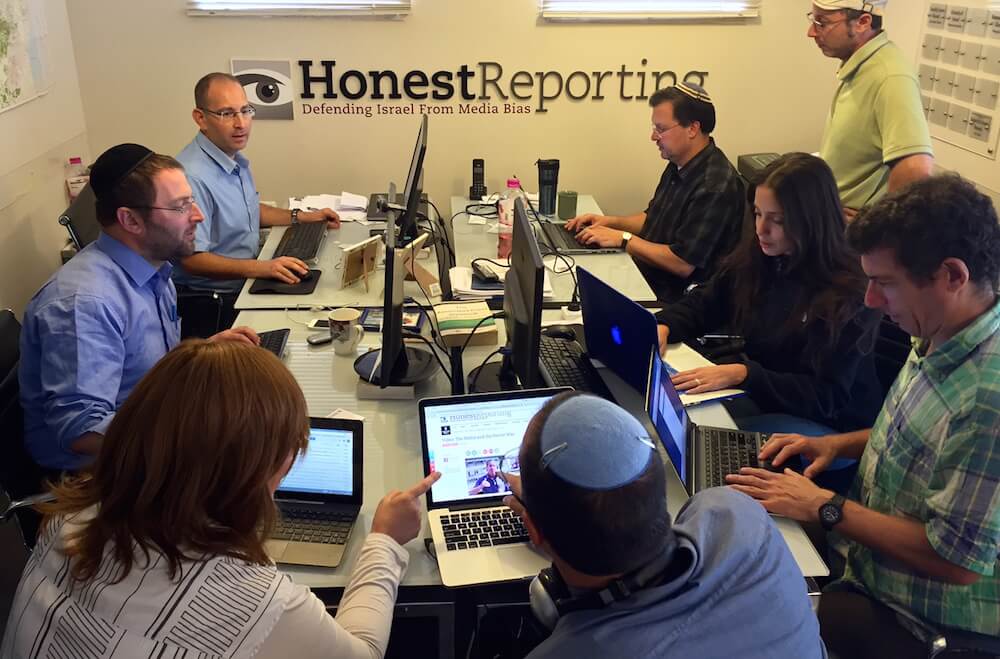 Now here (below) is a Jewish intellectual not biased in favor of the rogue state of Israel, incapable of following any kind of directive from the UN, like its protector, the US, completly disrespctful of International Law. Prepotent and criminal, murderous Powers. Palestine? only another extremely poor Third World country.

In my opinion you are completely biased. Reality scapes you and you don't care about truth enough to think for yourself and RESEARCH from different sources than those who support and reinforce your point of view. You identify yourself with some people and believe you are different from everyone else, but you are a human being in the first second and third place, then you are jewish palestinian or w/e... white, black, hispanic. That's all nonsense, time to wake up passed a long time ago.

Well,well, well it looks like we have another topic to debate. Israel much maligned seldom defended!

Well I will defend that tiny country.

but... just answer me this tiny question (perhaps in your post, if you want):

Do you think is reasonable or logical to think that a developed country who has a major influence in world's foreign affairs, atomic capability, massive military and heavy lobbying all around the world, included mass media, could be in any kind of position of inferiority regarding any subject when compared to Palestine? How exactly is Palestine "abusing" (or whatever Palestine is doing) Israel from their shanty towns and refugee camps?

But first here is a video of Palestinians talking about their suffering in their own words from their shanty towns and refugee camps. Please don't Silence their Voices.

The video pretty much amounts to stating that the Palestinians have an upper class among the 2.5 million of them living in the West Bank, and they have malls. But I'll fully respond to it in your post!! =D

An employee of a coffee shop, a pizza delivery guy quite the elite! I'll be more careful ordering coffee and pizza next time. "/

Let me ask you this.. a tiny country that wields that much power and DOESN'T WIPE THEM OUT.. well that's the question you should be asking. Perhaps it has something most people with big guns don't have.. MORALS

This is one of the points I will be making, If you kill a gangsters daughter and then whine about how that gangster is persecuting you, your kind of stupid or rather the people who take sympathy on you are.

Instead of Defending I Chose to Attack

This post has received a 1.78 % upvote from @buildawhale thanks to: @homerus. Send at least 1 SBD to @buildawhale with a post link in the memo field for a portion of the next vote.

its still kind of revealing.

most of the people upvoted it, like something normal.

you were the only one to call it out. i thought title is satyricall enough.

its like call for oil donations for saudi arabia.

i think some of people from that photo are here on steemit, fighting their war, defending their holy state. and i think i even met them in discussions. important segment of this whole issue is / people there are not allowed to publicly call out their govt or army for any crime. if they do, as you see there is justice league of trolls ^ to find them and punish them.

and im talking about common people. not those who were celebrating airstrikes with booze and parties,or those who are stabbing picture of dead toddler on their weddings, but just normal people who wants to live in peace.

if nothing, i got me another author to follow ^

Im not going to punish you for freedom of speech.. but I can disagree with you as well.

im here for disagreeing mostly, and i already have few interesting people here to disagree with in free time.

most of the people upvoted it, like something normal.

you were the only one to call it out.

So what? a handful of people upvoted it... which means exactly what? nothing at all, isn't it?

i thought title is satyricall enough.

its like call for oil donations for saudi arabia.

If you don't clearly state that you are making satire (in the body of the post) don't expect anyone to recognize it as such just because of a tag. In that case, I could just edit a tag in this very post, leave the text untouched and say "well, it's all good, it was just satire to answer satire".

here is some information that might help you post "satire" in a way that people actually understand it is satire:

i think some of people from that photo are here on steemit, fighting their war, defending their holy state. and i think i even met them in discussions.

I guess this is just more satire. Are they (people from HonestReporting) here on Steemit? where? quote them... Maybe I'm not smart enough for satire, I'm finding it very hard to follow your lead.

actually i had to watch that video, and few more from same channel to make sure they are not satyrical. my first thought was that whole honest reporting is about mocking the israel state trolls. turned out its not.
and i find it funny. their propaganda is narrowly aimed at israel and usa citizens. to everywhere else in the world, defending israel from media bias sounds funny^^^

to anyone from media industry, or to people in information and propaganda bussines, its just hilarious ^^

"If you don't clearly state that you are making satire (in the body of the post) don't expect anyone to recognize it as such just because of a tag. "
wait a sec...
seriously?
thats maybe how it goes in US of A. i assume...
do you also want me to mark funny things with "now laugh" directions, and tell you who are good and bad guys, so you can follow without single blink in your own brain?
thats not how it works really ^

honestly, i couldnt care less about any of amendments or any regulations of how satire should be :D even if its about laws of my own country^

Maybe I'm not smart enough for satire, I'm finding it very hard to follow your lead.

i dont know, you seem smart enough to me^

i guess ive made you make a mistake of not enough research and not enough attention prior to reacting to my post, which is sort of normal.

Curated for #informationwar (by @openparadigm)
Relevance:A good example of the mainstream bias against Israel( Yes, I @openparadigm have the opposite bias and will defend it)