In my last post, I assessed the claims distributed by a viral youtube clip that high soy consumption would lead men to act more feminine and to adopt left-wing, refugee-friendly opinions. This was very easy to debunk, as science evaluated the effects of soy products on grown-up men multiple times and found them to be harmless and mostly non-existant.
For some of my readers though, I did not work thorough enough. And yes, I overlooked what I thought a minor argument in my first post. Thanks @felixxx for your criticism, it was appreciated and led me to write this post.

For at one point, the clip mentions that the increasing use of soy infant formula could threaten the sexual development of men. So let’s take a close look at this claim as well. And I’ll keep it more scientific this time, I promise… Ok, I’ll at least try it. 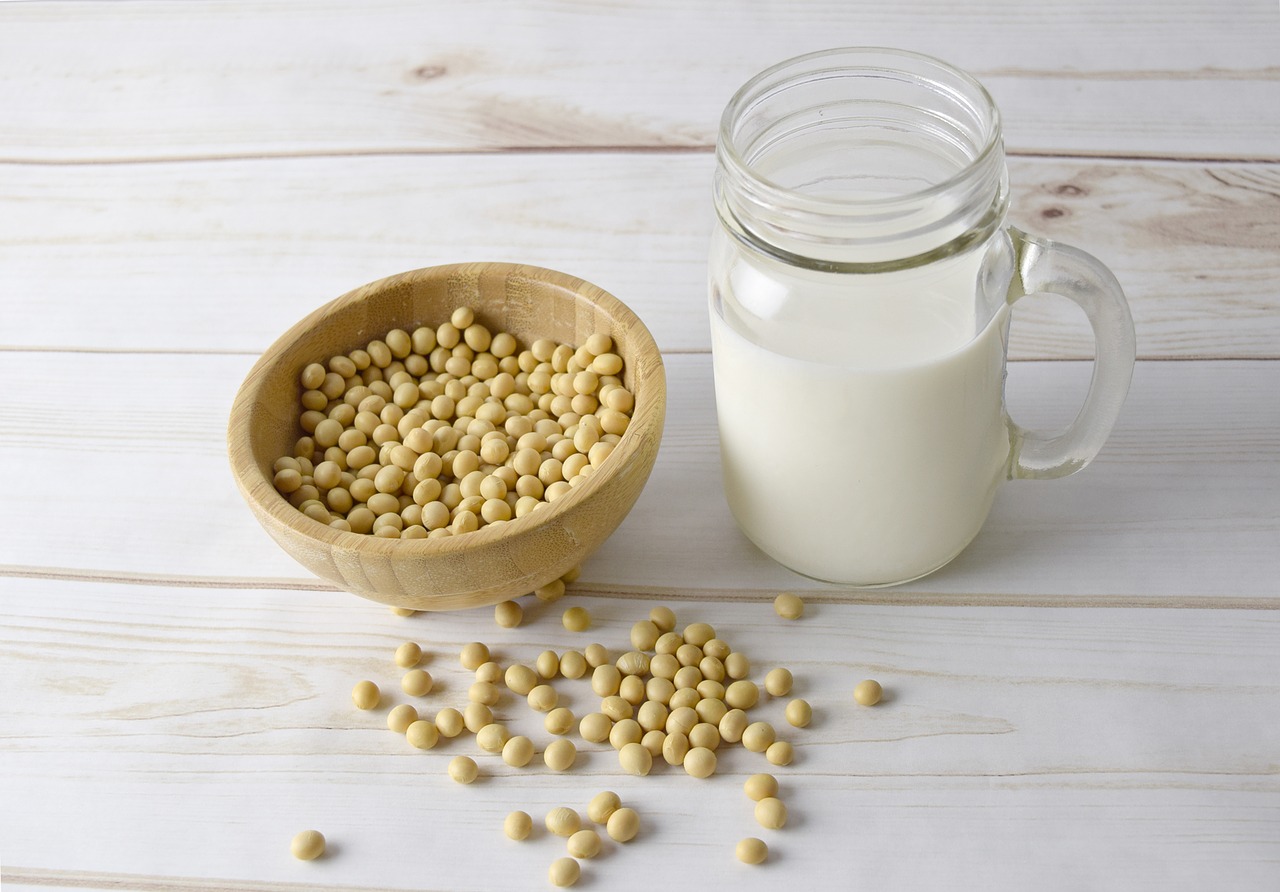 Another picture of soy milk from pixabay

By 2018, it should be common knowledge that breastfeeding is superior to anything else when it comes to health. But of course, that doesn’t always work. Plus there are different reasons not to breastfeed, and that’s completely up to the mothers, I am not arrogant enough to intervene in any of these personal decisions.

The alternative is obviously using infant formula. Conventional formula is produced from cow milk. Some children, however, are allergic to milk proteins or lactose. And here, soy enters the picture. Soy is rich in valuable proteins, cheap to produce and thus the crop-of-choice for producing plant-based formula.

What was originally just invented for allergic children has gone trendy with the vegan movement, and particularly in the UK, Australia/NZ and the US, where the market percentage has risen from 8% (1999) to 12% (2009)1 and further above 20% (!) in recent years.
In Israel, soy formula even accounts for more than 30% of all formula sales.
In contrast to those countries, continental Europe is different. Even our hyper-allergic formula (HAA) is produced from cow milk, and soy formula had market shares around 2% in France and Germany in 2009.
One reason for this dicrepancy probably really relates to the differing opinion on food safety between Anglo-American and European agencies, but we'll get to that later...

Why could the use of soy formula be a problem?

As I wrote in a previous post, soy contains isoflavones which chemically mimic the female sex hormone estradiol and thus act estrogenic.
This has very little effects in adults, as it is hardly possible for us to ingest the insane amounts of soy that would be needed to accumulate enough isoflavones in our system (except we take them as supplements, of course).

But in an infant that weighs maybe just 5 kg, and who ONLY “eats” and drinks soy formula - and thus accumulates much higher concentrations of phytoestrogens - the situation could be quite different.

Science was never blind to this possibility. The effects of soy on infants were studied since the 1970ies, and extensive data is available. One key problem of research in this particular field is that the metabolism of isoflavones differs significantly between rodents and humans, so we toxicologists can’t do our usual routine of extrapolating data from animal studies to humans.
Thus, we have to rely on so-called epidemiologic studies, which means we have to compare large groups of people who were fed on soy-based formula to those fed on cow milk formula. Those studies are sometimes hard to interpret, because numerous other factors can contribute to observed effects, and deviations are usually quite high which can to be countered with even larger numbers of participants (if you can afford it, because science is expensive).

So what are those studies saying? To address our initial youtube clip again, feminization of “soy boys” was never observed.3, 4 Also, being fed on soy formula does not lead to problems with sexual development5 or a more feminine role-play behaviour of 3-4 year old boys.6
Fun fact: In male monkeys, the use of soy-based formula even lead to larger testis. But not to any other “adverse” effects either.7

Based on all the available data, it seems highly unlikely that “we’re losing an entire generation of men…on soy” (Paul Joseph Watson), or that soy formula has even slight effects the sexual development in boys.

BUT: Soy-based formula probably has some effects on girls!

While young boys should possess very little estrogen receptors (which is probably why they are quite immune against isoflavones), girls have more. For girls who were previously fed on soy formula, there are reports of an earlier onset of puberty, longer menstrual bleeding and increased menstrual discomfort9, amongst others. They also are "less girly" (whatever that means) in their role-play behavior when they were on soy during the first months of life.6

So while soy-based formula is probably safe for boys, the same can and should be doubted for girls. Which is why authorities around the globe (e.g. the NIH in the US or the BfR in Germany – links are going to the respective reports) repeatedly urged parents to use soy-based formula only when there are indications (e.g. allergies) that requires abstaining from cow milk formula.
Hovever, their tone is quite different. While the NIH sees "minimal risks" in the use of soy formula, the BfR uses a whole different language (see conclusion section below).

There’s a huge difference between saying that long-term effects are not entirely studied and that soy is “turning men into pussies”. There was no single accusation of the InfoWars video clip that withstands a scientific review.
So I stand by my initial statement: it is bullshit. Nothing is 100% sure, and so I bite back the word “complete” for the sake of scientific correctness, but still…
In men and boys, science does clearly not back P.J. Watson's claims, even as long-term effects of soy formula use are not fully elucidated yet, so admittedly there is still room for speculation, but this huge impact he believes in is clearly not there.

However, when we expand our focus to girls, the heavy use of soy infant formula gives reason to worry. Here, there are scientific reports of negative health effects.
If you are a parent wondering whether you should use soy or cow milk formula, I want to share this quote of the German Federal Institute for Risk Assessment (BfR) with you:

English:
The long-term effects of an elevated intake of isoflavones on infants is not fully clarified. […] Not or not fully breastfed infants should only get them on a regular base in justified exceptions and after medical recommendation. Soy formula is not thought for the nutrition of healthy infants.

I’ve nothing to add.

An Announcement: I started all this the wrong way. I should have written about the theoretic background of estrogenicity first, and THEN about soy. I'll catch up on that with my next posts.

oh nice article. I hope parents of girls will read this. I think anyway it is a false heuristic to think that a estrogen-receptor agonist leads always to fiminisation...its like always a litle more complex. For example the role of brain aromatase and androgene behavior: there are hints (its not well understood) that the effector for adrogenic behavior are in fact estrogene receptor dependent. Of course the higher the brain avaiable testo, the higher the aromatisation. No hormone is inherently male ore female they are molecules

But as a parent I would be more afraid of real hormone disruptors, besides this men today are kind of pussy, because there is a strong secular decrease of testosterone, compared to men from the 1950s
https://www.ncbi.nlm.nih.gov/pubmed/17062768

I think its still not known why, obesity was not the cause.

Men do have estrogens as well, but in quite low levels. They are important co-factors for sperm production, for example.

Also I would definatly say that isoflavones can be classified as endocrine disruptors...but I think they are far less dangerous than other chemicals of that group, like the mycotoxin zearalenone, some compounds used by the plastic industry (BPA, phtalates) or some pesticides.

From what I read, the major problem of the infant formula was the low cholesterol content compared to mother’s milk. Infants need huge amounts of cholesterol. But I don’t know if they changed the formula in recent years.

I never heard about the cholesterol, but that could be a valid point.

As far as I know, testosterone levels don't correlate at all with soy consumption. But I really think what I wrote in the first soy boys post is applicable: if you're acting feminine and you're a liberal "Bobo" (I don't know if that word even exists in English^^), you much more likely to be part of a community that encourages veganism and other health cults, and thus you are more likely to like soy.

In this article are lots of studies about cholesterol and babies:
http://perfecthealthdiet.com/2011/07/low-serum-cholesterol-in-newborn-babies/

I'll try to paraphrase something I've seen on FB:
After rading 56 books about the parenting, food, nutrition...
I asked my grandma: how did you knew what food to give me.
Grandma answered: well, I gave you what we had.

If something worked for ages - don't go to the extremes with some novel revolutionary products or methods.

The recomendation from BfR is simply reasonable

I had never heard about that at all (both for soy boys and soy girls). It is good that today have such studies, but it would be even better if the concerned people would read them. There I am more concerned and I may imagine things escalating than being reasonable...