A Fall Garden in Hardiness Zone 7

So now that summer in the northern hemisphere is winding down and a lot of the harvest is in, it’s time to get the fall garden going full speed. As spring and summer crops finish and old plants are pulled out, a lot of open beds begin to appear so it’s time to start filling them up again.

Being in hardiness zone 7a it is possible some years to continue harvesting some things into December. My first frost is usually around the middle of October but most things I plant in the fall can withstand a frost and probably tolerate nights in the upper 20’s. That being said, I began planting some fall crops this year as early as July. Even though many plants can tolerate very low temperatures, the sun begins losing energy and the days become shorter as the fall months arrive. Crops that take 8 weeks to produce in the spring may take 10 weeks in the fall. And eventually things go almost dormant so it’s important to get things going early enough to guarantee a harvest.

Snow peas are one such plant that takes a while to produce. My spring planting took 9 or 10 weeks before they even began producing so for my fall planting I needed to allow for 11-14 weeks. I planted my peas in the middle of July and hope to get snow peas in October. I grow these the same way as I did in the spring using tomato baskets as my support system. 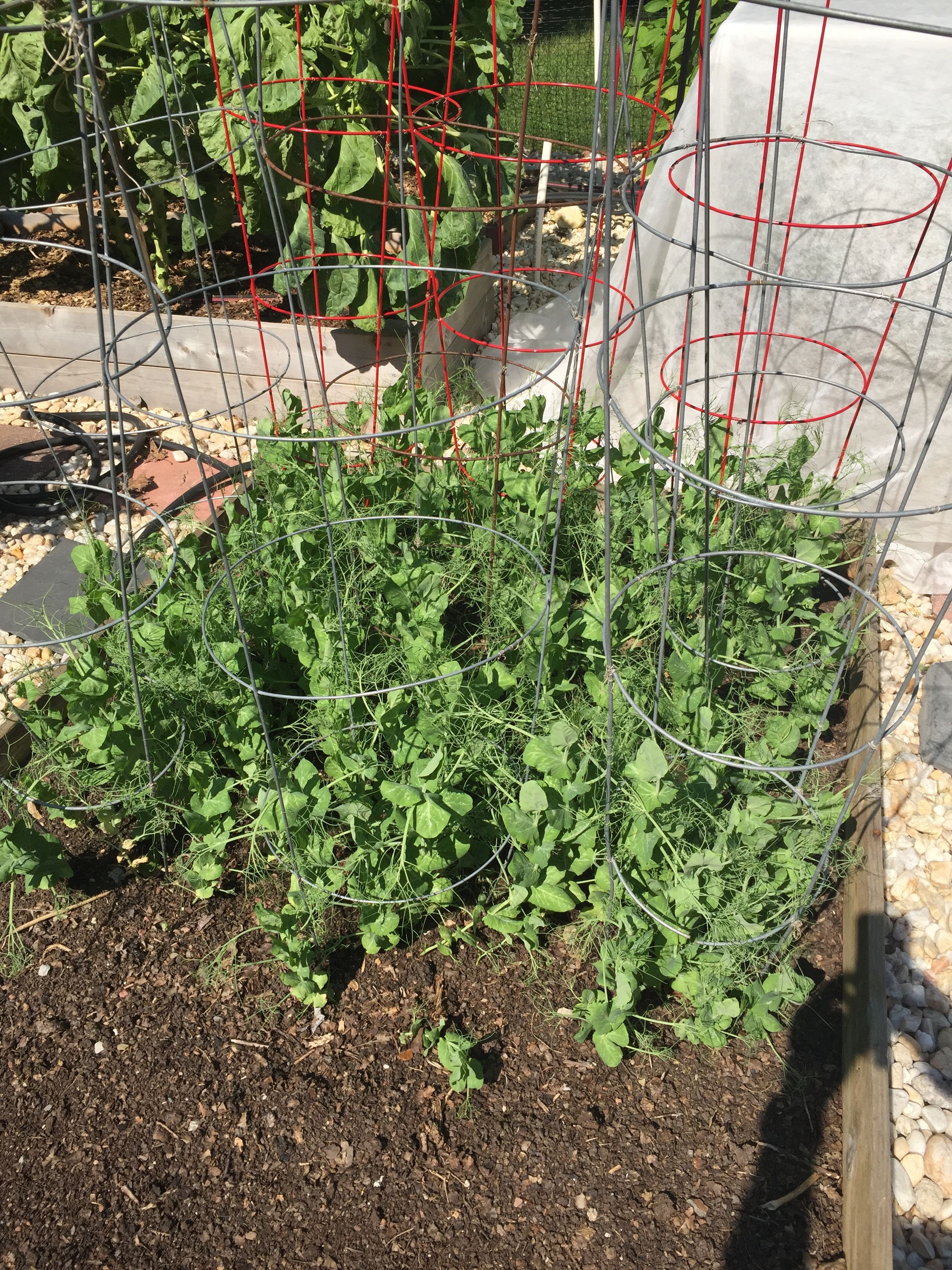 I’m growing a crop of Italian Roma beans for the fall. These were planted the end of July and should produce a nice crop late September through most of October. My beans are the one thing that is susceptible to frost so my harvest may get cut short in the middle of October. 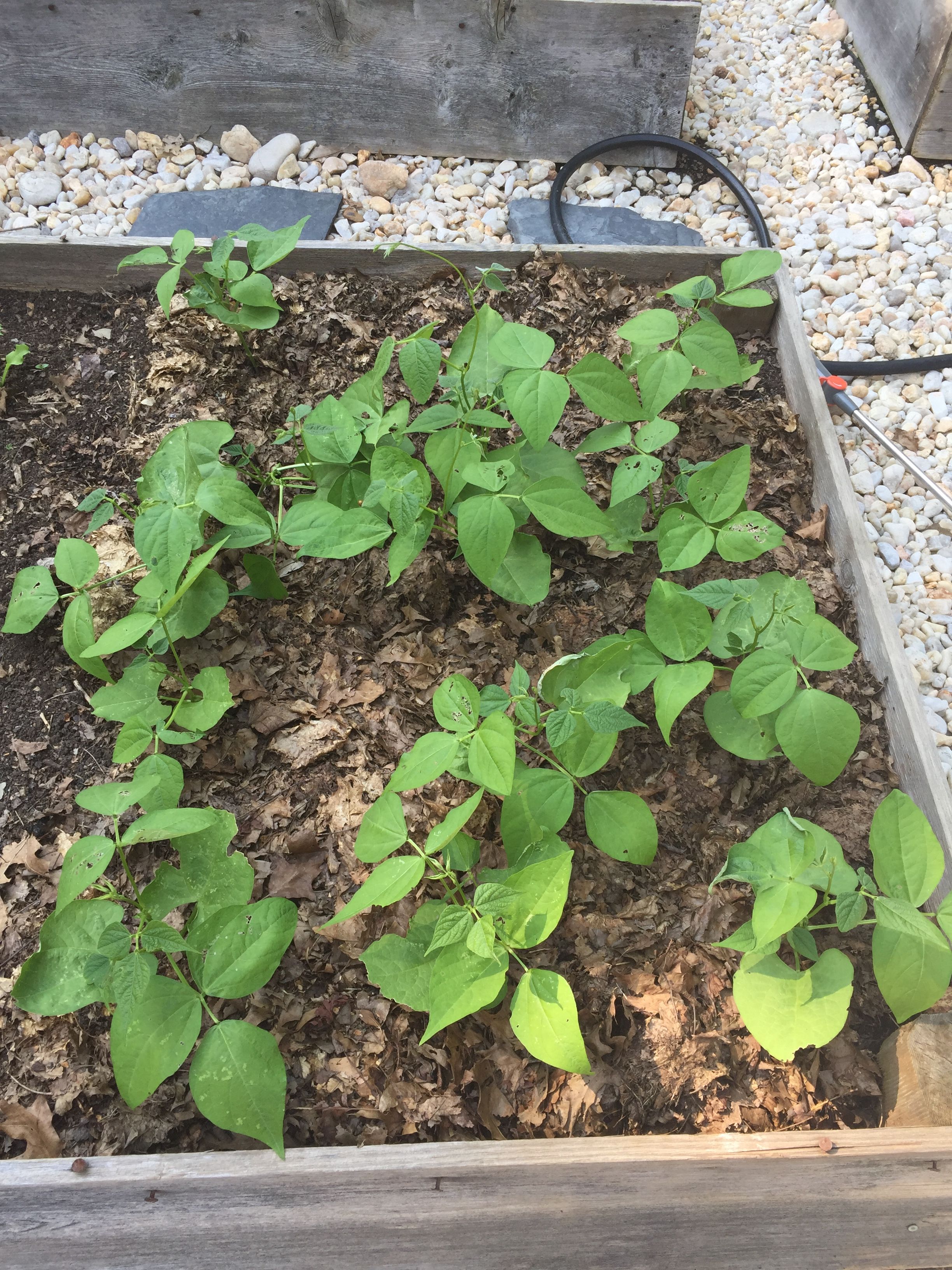 In the Cole family I’m growing broccolini, savoy cabbage and kohlrabi. The cabbage and broccolini I’m trying to protect with a row cover from the egg laying moths. I built a couple frames with PVC to keep the row cover off the plants. 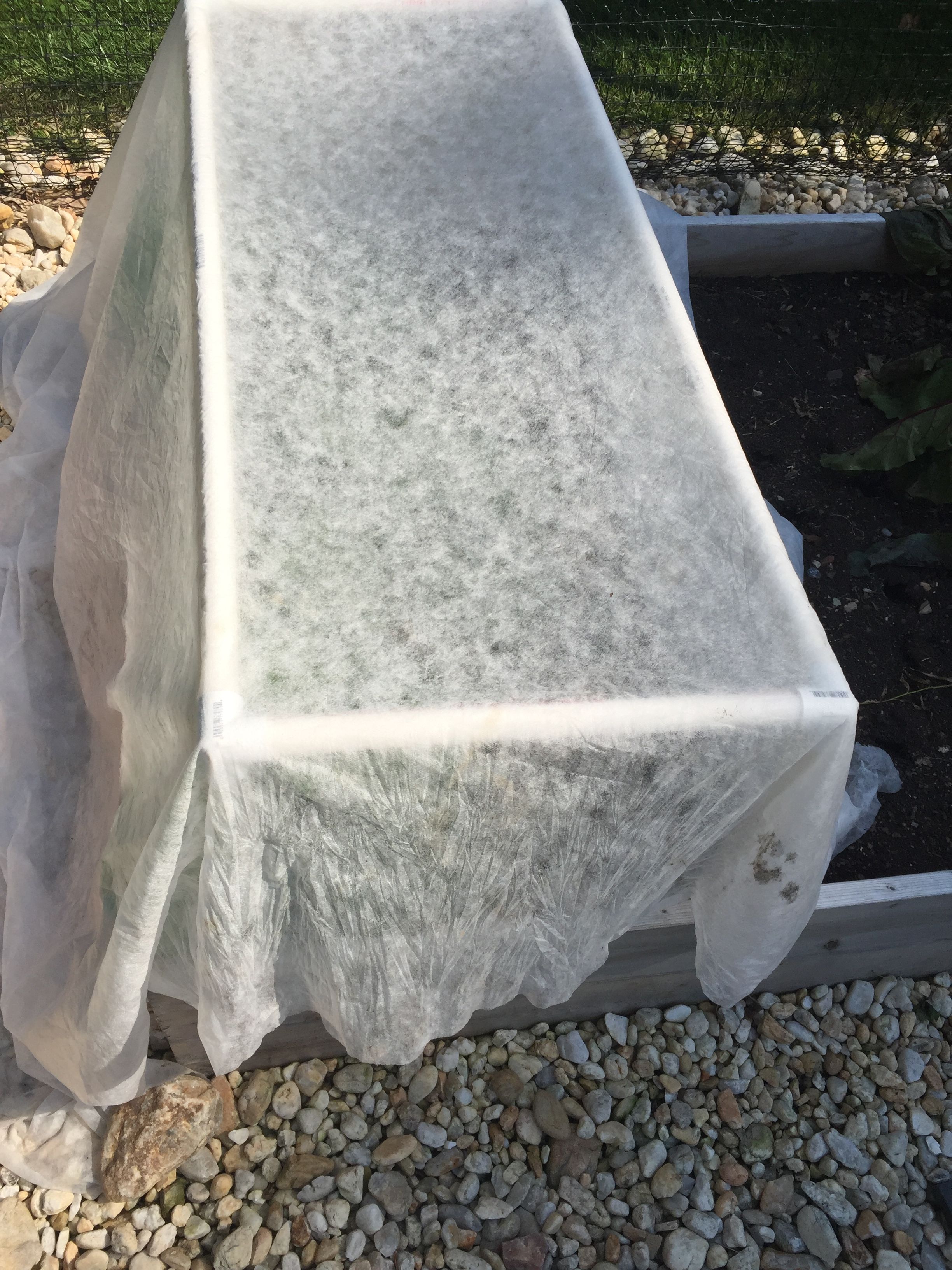 These were also started in my basement under my grow lights and transplanted into the garden in the beginning of August. I have found it very difficult between the summer heat and bugs to start broccolis and cabbages from seed in the garden so I get them to a good size in the basement and then transplant them. They are doing very well so far. 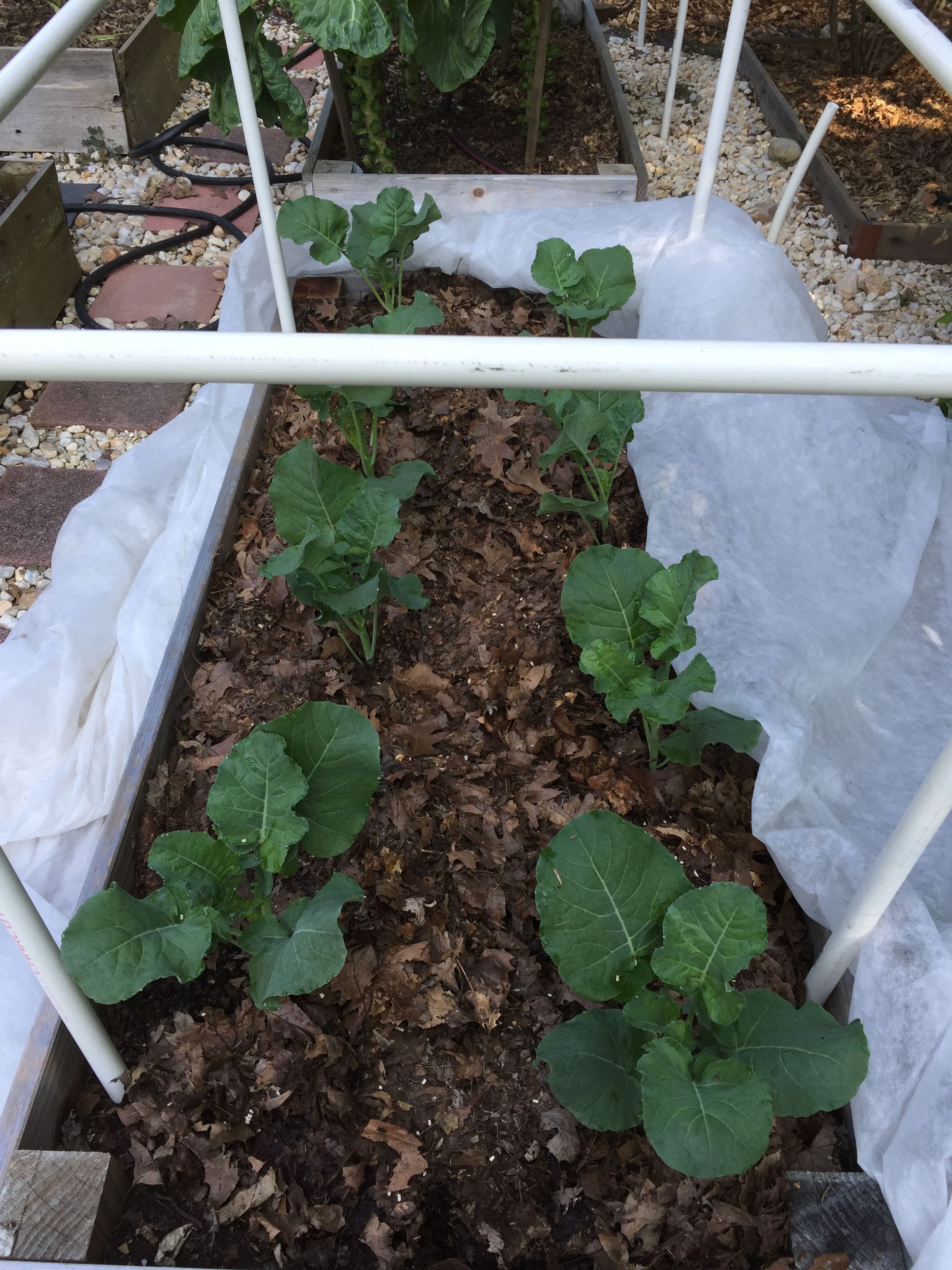 Here are my kohlrabi plants which I didn’t bother covering or starting in the basement but treat with diatomaceous earth to keep the flea beetles and other pests away. They are doing ok and I just planted a second crop since they do not take as long as broccoli and cabbage to produce. I’m having some difficulty getting the spinach and lettuce going this year so far and may have to wait until it gets a little cooler but I was able to get some endive going. 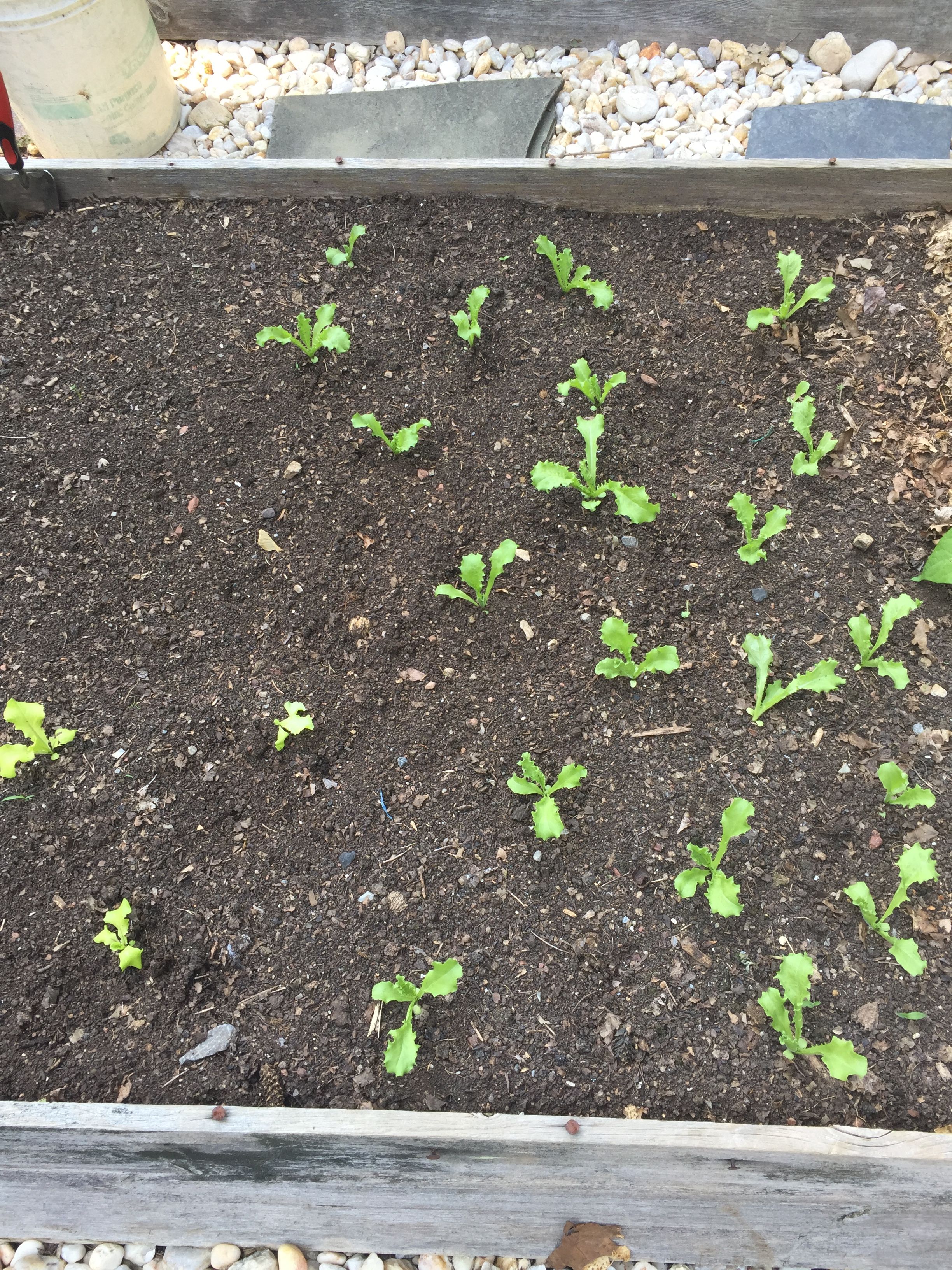 My root crops for the fall consist of carrots, radishes and bunching onions (or scallions). They are doing well but some nocturnal ground pest (possibly some sort of cutworm) is eating some of my carrots so I'm keeping them dusted with diatomaceous earth as well. 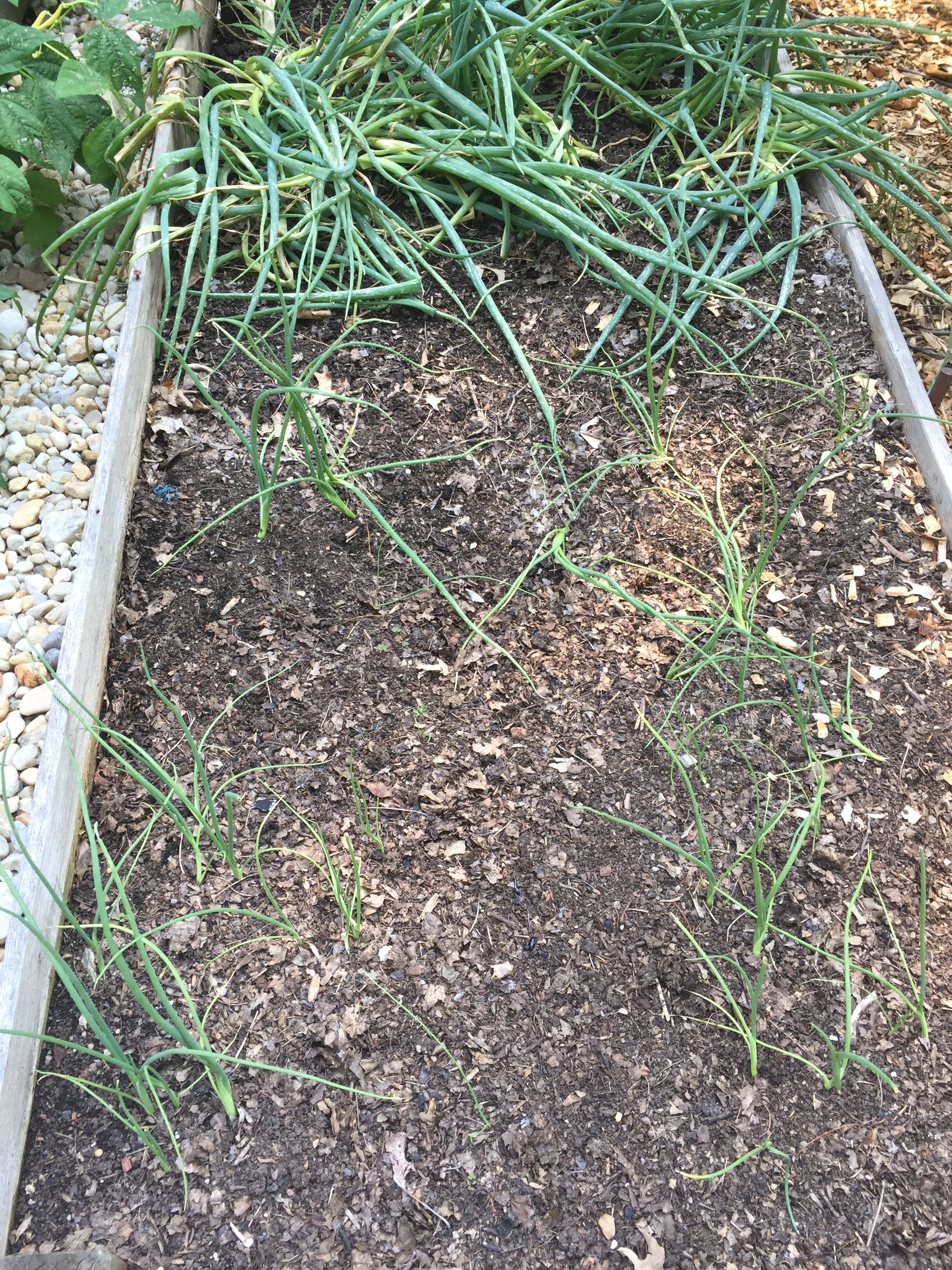 I will continue to plant radishes for at least another month since they mature quickly. It is always difficult to get the spinach going for the fall but I will be persistent until successful. I should have better luck once temperatures are topping out in the 70’s and falling into the 50’s at night. And if you read my spinach post I did in the spring you’ll know I have had good success getting my spinach to overwinter. So even if my harvest is brief in the fall, hopefully I will be off and running with spinach next April.

Thanks for reading and let me know how your fall gardens are going.

Lovely!! Spinach is hard to harvest in Zone 7. But, Swiss chard will take off and grow all year long! It's a fine substitute, in my opinion, and way easier to grow and harvest in out Zone 7.

Thanks for the comment. Yes I use to grow it years ago but just enjoy spinach better and got away from it. Maybe I will give it another try.

Awsome post. I have already planted my beans for fall harvesting. They are about 1.5 feet high. I was bold enough, to try 2 weeks ago to plant potatoes in my raised bed. I know they need 100 days so I planned it out perfectly for the first frost. Thanks for sharing

Thanks! Good luck with your fall crop. I've been researching brussel sprouts because I never have any luck and I think it's because I put them in too early. Next year I'm not putting the plants in the garden until the beginning of July and will grow for October- December harvest. It seems the really need cold weather to produce properly.

or put them in earlier.

No that wouldn't work here. From my research they need it cold when the brussel sprouts are forming which is approximately 3 months after planting. They would have to be planted early to mid summer for that to be possible.

Really thank you for that. I was not aware of that. This is why I love steemit. To learn all I can about gardening. following you.

Impressive beds! It looks like you do a fantastic job keeping things organized - I guess that's necessary for a good vegie garden! My forte is flower gardens and shrubs (planting and maintenance), but I'm slowly learning about vegie gardens. Thanks for your photos and explanations!

Also, looks like you'll get a large crop of everything...is it enough just for your family? Do you freeze things when they are in abundance?

I freeze a lot of tomatoes and some peppers but that's about it. I make a lot of pasta sauce through the year so I grow 6 romas dedicated for cooking and all those plum tomatoes get frozen. Three early girls provide additional tomatoes for freezing so I can use mostly garden tomatoes for my sauces all year.

I have learned through the years how much to grow of a certain crop without having more than we need so I get a great variety of things during the growing season but not too much of anything - other than tomatoes. It works out to a savings of $1500 a year according to my calculations based on organic prices. And that doesn't count what I give to friends and neighbors.

Yes I tracked what I was getting for three years and it always came close to $1500. I was pricing it as organic which inflated the price but that is how I buy my food during the off season mostly and my garden is organic so I thought that was fair. Of course the berries account for a lot since organic berries are so expensive and I get so many in June and July. I would never buy that many berries if I wasn't growing them so it may not be considered true savings but you get the idea.

I really liked this post. I love gardening tips (just actually have to do it...lol). I would love to follow but I don't know how. Could you point me in the right direction. Thank you for sharing with us all.

Congratulations @garden-to-eat! You have completed some achievement on Steemit and have been rewarded with new badge(s) :

Garden is looking good! Its a massive job maintaining a garden isn't it ;)

Yes but if you love it like I do it's not so bad. I'm retired now so it is perfect for me.

Thanks. Following you back. I'll take a look at your posts.

A very nice array of vegetables you've planted @garden-to-eat! It will be really very nice feeloing when harvesting these beauties!
Wish you have a great harvest!
Lovely post as usual!
@progressivechef

Thanks chef! We're entering the last hurrah of garden season here. Before you know it I'll be putting it to bed for winter.

I love your PVC frames! They seem to be easy to assemble. Do you leave them in place year round or only set up as needed?

So neat that you've got the ability to put in a second planting. I think I'm too far north (near Chicago) to pull this off, especially with containers. I may have to consider a PVC greenhouse-type set up for the future.

Thanks. No the PVC I just put together as I need them. I have dedicated frames for my blueberries but for the row covers I just keep a lot of PVC in the shed and mix and match as I need them.

You should be able to have a fall garden in your area but not sure how well it would work out with strictly containers.

Gotcha! It's the flexibility of the PVC that caught my eye, so good to know mix n match is an option.

I'd need to totally revamp the buckets for a fall attempt this year. They'd been sitting, unused for years and this year was just lark because they were there. Still shocked I'm getting produce. Lol!

WOwwwwwwwwee!!!! A beautiful and abundant fall garden, way to GROW!!

Thanks. I just put in more spinach and lettuce now that the heat broke here and covered it with a row cover to protect the bed a little from the pests. I think I'll have better luck this time.

I just planted my fall garden this weekend. I think I'm way late but I'm hoping for the best

I saw your post and like the job you did with your row cover. You may be ok down in NC. I'm picking my fall snow peas and kohlrabi already. Beans maybe next week. Cabbage and broccolini in 2-3 weeks. Lettuce never stopped.