Welcome to part 3 of this 4 part series on the Flat Earth Antarctica Conspiracy Theory. Here are the other parts in this 4 part series. And we'll have one article that is a compilation article if you prefer to read or link to all 4 parts at once:

Flat earthers are so desperate to find evidence of this ice wall they have somehow latched onto Admiral Byrd as providing not only evidence of an ice wall and flat earth, but evidence there are lands BEYOND this ice wall the Antarctic Treaty is designed to hide! They claim part of the massive conspiracy to hide flat earth from us is because there is much more land to be explored, and that governments are secretly exploiting these lands and using the resources to make themselves rich! And Admiral Byrd is proof of this. 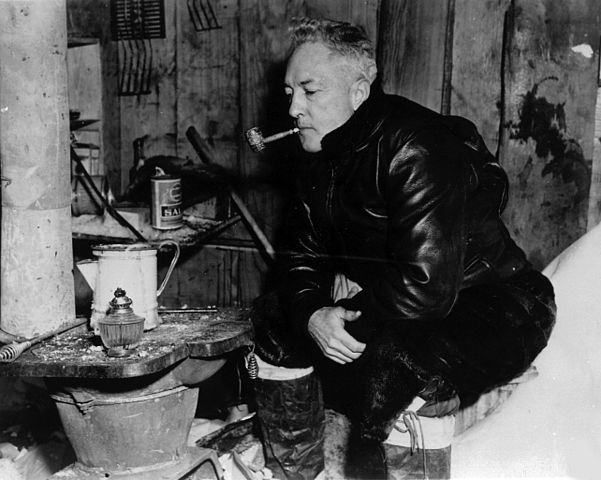 But Admiral Byrd neither said nor implied any such thing. Flat earthers simply make ridiculous claims that are merely passed on and repeated like a game of telephone by people who are unable or unwilling to do their own research, or who take things out of context to either confirm their own bias or be dishonest.

You can watch An Interview with Admiral Byrd here, and what he actually said, at 1:41 is, "Strangely enough, there is left in the world today, an area as big as the United States, that's never been seen by a human being. And that's beyond the pole, on the other side of the south pole from Little America [his base on Antarctica]". Flat earthers take this to mean that there is land BEYOND Antarctica, and modern day Americans who don't understand the context of the time might be excused from misunderstanding or being confused about that statement, however just a bit of fact checking would clarify what he meant.

Byrd was referring TO Antarctica, as the vast majority had not been explored yet. At the time, Admiral Byrd was hugely popular, and people had followed his exploits in Antarctic and certainly knew that Little America was his base, which is why neither he nor the interviewers felt the need to explain what Little America was. But to many, it sounds like he said, "Middle America", and it makes it a bit confusing.

However, what he meant by "The other side of the pole from Little America" is easily discerned when looking at this map of Antarctica with his Little America base on it. He was simply being specific as to the unexplored region of Antarctica that was on the opposite side of the South Pole from his base. No conspiracy, just specificity. Hilariously for flat earthers, who obviously have not watched the video themselves, later in the interview, Byrd uses the phrase, "The bottom of the world" many times. The time stamps are at approximately:

Additionally, in the first part of the interview, he refers to Antarctica as "the size of the United States". He was actually pretty close, as you can see in the image below, to the size of the continent as we know it that is approximately 14,000-15,000 miles in circumference, and not an 'ice rim' that is the circumference of the entire world. If an explorer had found an ice rim so large, it circled the earth and was at least 60,000 miles long (as we go over in Part 1: Debunking the Flat Earth Ice Wall to show how we arrived at that figure), referring to such a find as "the size of the United States" would be patently underestimating the vast unimaginable size of the area, and would just not be how one would describe an ice rim that circled the world. 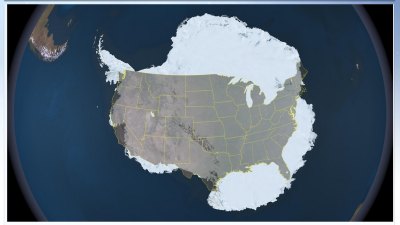 Even later, at approximately 5:30, the interviewer asks, tongue in cheek, "I've heard it said there are 7 continents in the world and the only one that has never been seen by a woman is Antarctica. Is that really true". Byrd answers by saying, "As far as I know, that's true."

Even more interestingly is that an Admiral Byrd stamp was released in 1934, very much while Admiral Byrd was still alive, and the stamp features a globe with Antarctica at the bottom of the earth, right where he suggested it would be, and right where maps show it to be today. There is nothing to suggest that Byrd would have been dismayed or amused by this stamp. It was intended as a tribute to him, and there is no reason to believe that he thought otherwise about it. If anything, these show that Byrd is a sphere earther, talking about the bottom of the world, both extremities of the earth, a globe stamp in his honor, and the seven continents that we still know today. Certainly, it does not suggest a HIDDEN continent that, of course no woman would have stepped on either. Byrd also conducted long range reconnaissance missions by plane over Antarctica, mapping over a million square miles, giving us much of the shape of the continent as we know it today.

Was Admiral Byrd a Friend or Foe?

To add even more color to this conspiracy, there are flat earthers in another camp, who believe that Admiral Byrd is not telling us about the lands beyond Antarctica, but that he's part of the conspiracy to hide the ice wall from us. And his expeditions FOUND the ice wall and subsequently started this whole multinational conspiracy to cover up this truth from us! Their 'proof' of this is that Admiral Byrd was a freemason! 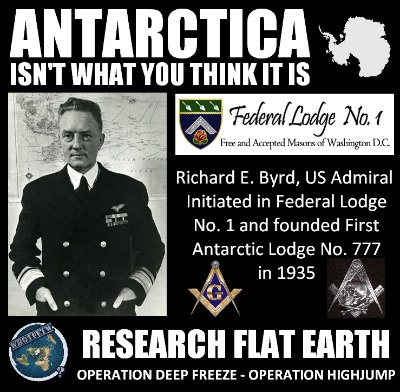 So, which is it, is he a friend of flat earthers, talking about "lands beyond" Antarctica, and telling the world the earth is flat? Or is he a nefarious freemason illuminati who is lying in order to hide flat earth? Flat earthers are divided on the topic.

But something about Admiral Byrd seems to incite conspiracy theories of one sort or another. There are conspiracies about him giving testimony of having seen UFO's by the UFO conspiracy folks, and hollow earth theorists claim he did a 'secret' flight over either the north or south pole (the sources are divided on this) in 1947, where he found the opening to the center of the earth and met people who lived there. This claim has been around for so long that as far back as 1961, The New York Times put out a challenge for anyone who had evidence to bring it forth for publication; and even The Hollow Earth Insider website did a long, well-researched piece that debunks this claim, believes it was actually a lie intended to discredit hollow earthers, and, again, offered a challenge to anyone with evidence to bring it forward.

But instead of this Byrd flat earth conspiracy dying due to lack of evidence, flat earthers have revitalized it, probably because they are desperate to find something, anything, to back up their wild claims. Rather than providing evidence of flat earth, this conspiracy, along with the Antarctic Treaty Conspiracy just gives more weight to the bizarre mentality and desperation of flat earthers. In order to get scientific recognition of their flat world, they could go about commissioning a satellite, plane, boat, exploration party, or some such thing that the growing group of multiple tens of thousands of flat earthers could fund with a Kickstarter campaign. Instead, they avoid getting any real evidence, like doing an expedition to Antarctica, or even just sending up a satellite, and instead revitalize long-dead conspiracy theories by taking words of a man long-since dead, take them out of context, don't research anything, make wild claims, and expect you to believe in massive conspiracy theories of which there is no evidence. Unfortunately, it seems that there are many gullible people falling for this nonsense, and their cult seems to be growing by leaps and bounds.

Please read the continuation of this 4 part series here:

Please upvote and Resteem this article in order to help flat earth debunking articles rise to the top on Steemit and the rest of the internet, to provide a truthful counterbalance to the massive amount of 'good sounding' but inaccurate videos and articles convincing people this nonsense is true.

Thank you for the suggestion and the upvote. I'm curious as to why, though, since I've never been asked that before. I get most of my images from Wikimedia Commons that don't require attribution, or I purchase them from a stock photo company (so that I never violate copyrights), and when I get them from stock photos, it would be strange to link to the source. I don't even think they give you the source in stock photos that I purchase!

I'm unsure of the 'etiquette' on this, so I'd appreciate the tips. Maybe even do an article on it, if it might benefit others.

By linking the images it will help you qualify for curie review. You read up more on @curie. I was only trying to assist:)

I'm just trying to learn. I had no idea about curie, so I'm happy you are letting me know about it. I'll check into it.

But why do you think that General was a flat earthier?

But I mean he could also believe in spherical earth. And he could go explore the south pole from that perspective and than he could make a conclusion that it is flat.
You are right about the size of Antarctica and US almost the same but he is saying that the part he found is "the size of the United States".
Everything is unexplored and will be to eternity

And there would not BE any 'part' that he found that could possibly be as large in mass as the United States if it were an Ice Rim. Because the rim would have to be only several hundred miles wide at the most, as you can see on the flat earth map.

Byrd and his crew did aerial surveys over it, logging hundreds of hours of flight time, and included camera footage of the continent. If he had found an ice rim, with the data that he had, he simply would not have described it the way that he did.

Then he also says, "The bottom of the earth" many times, as I pointed out in an actual interview, and mentions "The two extremities of the earth". That is simply not consistent with a flat earth.

So, I'm a bit unclear as to what you are saying or suggesting. It seems a bit like you are supporting Byrd MAY have been a flat earther, and I'm unclear as to why and how someone could support that view from anything Byrd said or did in his lifetime.

Would you care to explain? Because there have been two challenges posted since 1961 for anyone to provide evidence on the subject of Byrd supporting a flat or hollow earth viewpoint, and no one to date has come forward to provide such evidence.

The Earth is not what we are told but I do agree that many flat earthers tend to take things out of context.

Thank you for your diligence on this topic. People must have the Fox Moulder syndrome... Hehe