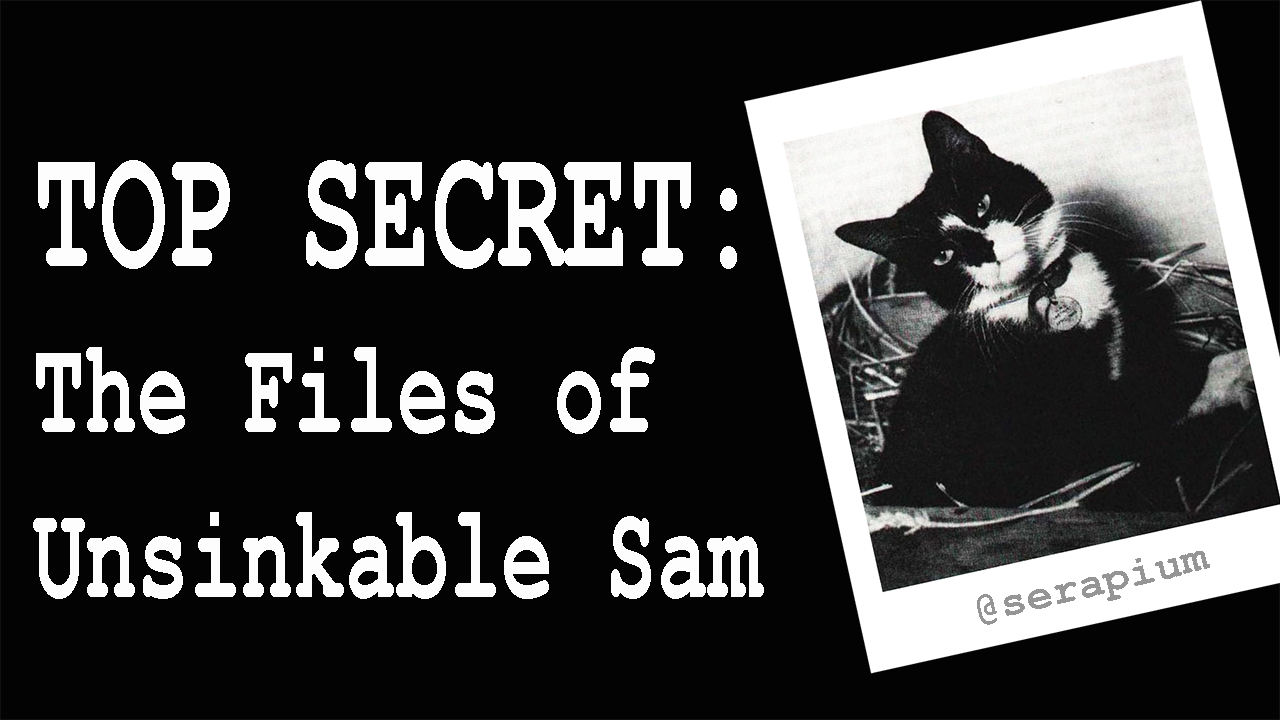 Following is my entry for the Shipwreck Writing Challenge, Round Two.

As a prompt I chose the subject of ‘Unsinkable Sam’, a ship’s cat that survived multiple battles and ships that were sunk during WWII.

In preparation for this entry I did some esoteric divination and communed with my spirit animal. Between knowledge gleaned in that process and through using remote viewing techniques I have become aware of the following completely true and previously unknown facts regarding Unsinkable Sam. I hope you enjoy them as much as I have. With knowledge of the truth behind Sam’s origins, it becomes immediately obvious why the picture below clearly shows that Sam lost all sense of humor. The True Story of Unsinkable Sam

This Appendix is a reproduction of the raw ship’s log from Scout Craft G356 of the Ninth Fleet. Information contained herein is provided solely as supporting evidence for conclusions contained within the body of this report. It is recreated here exactly as input during the mission, and serves as a personal narrative of the events leading to the disappearance of Scout First Class Grabinibix Th’Nor.

I have encountered a previously undiscovered semi-sentient biological population on the third planet of stellar system Q3:(145.2X, 769.2Y, 224.5Z). Initial assessment shows a technology level just beyond industrialization. Radio frequency communications are in evidence and the ship’s computer is in the process of decoding the native languages. Per standard fleet doctrine I am descending to the planet’s surface for reconnaissance.

Initial intelligence gathering is complete and I have safely returned to the ship. The biological species of this planet are most peculiar. Native species come in a myriad of forms, both bipedal and quadrupedal. I was able to stealthily approach the secluded domicile of one bipedal family grouping and observe their behavior. To my surprise, it appears that the smaller quadrupeds are the dominant species.

The bipedal family unit exhibited deferential behavior towards the resident quadruped and were observed to perform duties typical of servitude; they provide the quadruped with sustenance and clean facilities for biological evacuation. They also serve as a source of entertainment for the smaller furry creatures and spend large amounts of time amusing the dominant quadruped with pieces of string. There is no shared language between the two species. I assume that the quadrupeds are controlling the bipedal slave race via psionic manipulation.

A tissue sample has been obtained from the resident quadruped and placed in the genetic replicator. Once the process is complete I will transfer my consciousness into the quadruped and return to the planet’s surface for stage one contact.

I made grave errors in my previous assumptions and have returned to the ship from a failed attempt at stage one contact. After using the transference booth to place myself within the quadruped generated by the replicator I returned to the location of my original intelligence mission to attempt contact with the dominant race.

The territorial nature of the quadruped is greater than I originally assumed and upon initiating contact I was physically assaulted. The claws and fangs of this creature are ferocious, and the violence it is capable of is astounding. Activating the stun feature of my neural implant was the only thing that saved me from imminent death.

Thus unencumbered of the quadruped, I entered the domicile to attempt psionic control of the slave species. To my astonishment such control was not possible. Furthermore, the bipeds appear to in fact be the dominant species despite their deferential behavior and the quadruped continually displaying mannerisms of superiority.

The largest of the bipeds actually chased me from their residence. I barely managed to escape death again, but found that deploying the claws my current form bears bought me just enough time to escape. As an added benefit to the claws, a new genetic sample of the bipeds has been obtained and is now in the replicator to facilitate a second attempt at contact.

Disaster! Oh, woe is me! While waiting for the replicator to complete its work my ship was struck by a meteor. Guidance and inertial systems were briefly knocked offline and ship stability within its orbit was degraded. In my current form I lack the proper tentacles to access flight controls and recover orbit. Through the neural implant I was at least able to slow my descent and survive the crash of my scout ship.

All systems remain functional with the exception of the transference booth. The plutonium crystal array was damaged by direct impact of the micrometeor, rendering the booth useless. As such I am currently trapped within the quadruped, which the ship’s computer now tells me is called a ‘cat’ in the local language.

I will be unable to pilot the ship off the planet’s surface in this form. My neural implant allows control of basic systems and lets me enter ship’s log data, but complex piloting procedures are beyond its capabilities. Repairs to the transference booth must be completed. In order to do so I must locate a source of Plutonium.

The computer has completed translation tables for the various languages used on this planet. The bipeds refer to themselves as ‘humans’ and their planet as ‘Earth.’ Analysis of communication broadcasts reveals that there is a planet wide violent conflict underway. My crash location appears to be behind the front lines of the ‘German’ side of the conflict.

Decoding of the local calendar is also complete. The current date in local nomenclature is April 17, 1941.

I believe I have located a source for the plutonium needed to repair the transference booth. Ongoing analysis of radio communications has identified that the ‘Allied’ side of the escalating conflict has a component grouping called ‘America.’ The computer intercepted a coded message referring to something called ‘The Manhattan Project.’ The Americans are in the beginning stages of research regarding nuclear fission and the intercepted report contains references to a store of plutonium being used for experimentation.

I must find a way to travel to the American side of this conflict and obtain a small portion of their plutonium stores to affect repairs to the transference booth.

With my shipwreck occuring behind the German lines, I have to travel through the center of the conflict before I am able to infiltrate America’s Manhattan Project. The computer calculates my safest possible route to be on board one of the human’s floating warships. I plan to travel to the nearest port and make my way aboard a vessel headed towards the front. Hopefully I will be able to disembark the warship at a later port of call and transfer to a merchant vessel bound for the Americas.

It appears that erroneously choosing the form of a cat is not without its benefits. Cats are routinely allowed on board floating vessels and are considered good luck. Being adopted by a sailor as a ‘pet’ should prove to be a simple matter.

This will be my final log report for some time. I have identified the closest port facilities in a town called Gotenhafen. The Germans are launching the latest in a series of battleships and my plan is to make my way aboard her for the maiden voyage. She is representative of the latest technology these primitive people have at their disposal, so it seems the safest method of travel. She goes by the name of Bismark.

With luck I will be able to return to my ship and affect the needed repairs.

For the glory and honor of the Empire, Grabinibix Th’Nor

It is with sad hearts that we report failure in the rescue attempt of Scout First Class Grabinibix Th’Nor.

During the 77 orbits of Earth since Scout Th’Nor’s shipwreck, the humans have established a planetary data network called ‘the Internet’. Upon analyzing the data network’s content one can forgive Scout Th’Nor for his erroneous assumption regarding cats. Indeed, to this day the humans worship cats as though they are religious deities. Analysis of data traffic on the Internet shows that approximately 80% of all traffic is videos concerned with either cat behavior or human procreation.

All vestiges of the crashed scout ship have been recovered. The body of Scout Th’Nor is still in stasis awaiting the return of his consciousness via transference. His remains are being delivered to his family because the lifespan of a cat is shorter than the period of time it took for Scout Th’Nor’s distress signal to reach us and for us to respond. Scout Th’Nor’s consciousness undoubtedly returned to the Galactic Mother quite some time ago.

Huge thanks to @steemfluencer for putting this together, and all the great people of @thewritersblock for helping me continuously improve my writing.

I think this is the most creative one I've read so far (I still have like 10 left but I don't think I'll find another as creative as yours). I've enjoyed reading it a lot. It captivated me from the beggining until the end. I wouldn't mind reading more about Scout Th'Nor's journey :)

Thanks! Maybe I'll continue it as though the rescue mission located Th'Nor's cat body and was able to download the contents of this neural implant. Presumably he would have had the ability to keep a log/journal within his implant as he tried to find his way to America on a boat. I can actually see a lot of potential for humor there, knowing what the actual cat ended up going through.

What a creative spin on the prompt, sneaking your way into the scifi genre. This was very entertaining. I particularly enjoyed Grabinibix Th’Nor's initial observations and his race's summary of the internet.

Thanks! I wasn't sure exactly where it was going to go when I started writing, to be honest. I'm glad it didn't just turn out to be a mess.

I really enjoyed this piece. Always wondered if cats were really an alien species of some kind...

I'm thoroughly convinced that they're at least partially existent on anotger plane simultaneously with their physical form here.