Does Anyone Care About These People Or These Crimes?

The "only democracy" in the Middle East receives billions of dollars from U.S. taxpayers every year and a lot of it is spent in propaganda, in telling people, through magazines, tv, newspapers, books, events, that Israel is the victim. There isn't anything remotely similar happening from the other side: they are poor and they don't have the support of the EMPIRE, the US.
@homerus

This one sentence is so full of it it must have taken you two wheelbarrows to write it!

The Palestinians have no money oh no they are so poor they don't get money from the Empire of the U.S..

Or wait do they get millions and billions of dollars not only from the US but also from the European Union from Iran from Islamic charities.

And what has the Palestinian Authority done with the billions of dollars to advance the cause of peace with Israel? Has the PA leadership used this money to promote peace and coexistence with Israel? The answer, of course, is no. Instead of using American financial aid to further this cause, the PA has done -- and continues to do -- the exact opposite. In addition to inciting its people against Israel on a daily basis, the Palestinian Authority leadership has been using these funds to wage a massive campaign in the international community with the purpose of isolating and delegitimizing Israel and turning it into a pariah state.

Iran has cut up to £15 million a month in funding for Hamas as punishment for the movement's backing for the uprising in Syria, the Palestinian Islamist group's leaders have admitted.

Palestine: From its consolidation of power in 2007 to the start of the Arab Spring in Syria and elsewhere in 2011, Hamas received approximately $100m to $250m per year from Iran. Hamas’s refusal to back Assad led to a dramatic decline in funding.

Lebanon: From the 1980s to the beginning of the Arab Spring, Hezbollah received between $100m and $200m annually from Iran. Domestic economic decline and the increasing intervention in Syria led to this number between being cut to around $50m to $100m per year from 2010 onwards.

Yet their people live in refugee camps they receive more money then Europe got for the Marshall Plan that's right the money used to rebuild Europe after the second world war the Palestinians have received more and yet their people still live in refugee camps.
They spend their money on discrediting Israel their propaganda operations have been well documented from the supposedly massacre at Jenin which when investigated by the UN, a body that is without a doubt Anti-Israeli they found that it was a battle not a massacre.

@homerus you asked for citations in your criticism of the Article by @interceptor so you could easily destroy their arguments now when I provide citations you label them as Zionist and therefore not worthy of taking seriously.

Tsk, tsk,tsk you should be ashamed. That is very lazy, dispute the facts!

If you think I'm using lies point them out. 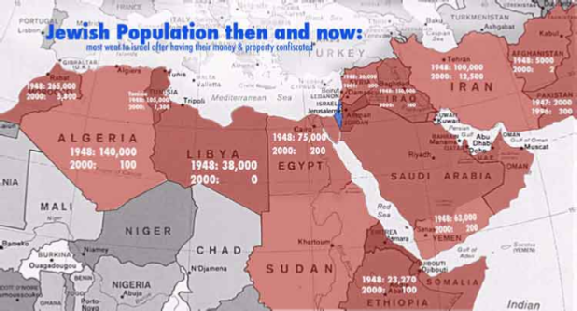 Look at The Then and Now, Look at Real Ethnic Cleansing.

You use the one country on the map I provided as a counter example, I'm glad you did.
In 1948 there were 100,000 Jews living in Iran now there is 8,756!
Seems like genocide to me, those Clerical-fascist Rulers of Iran are so nice unlike the Arab National Socialists and Clerical-fascists they keep some Jews around as pets, how tolerant.

Privately many Jews complain to foreign reporters of "discrimination, much of it of a social or bureaucratic nature." The Islamic government appoints the officials who run Jewish schools, most of these being Muslims and requires that those schools must open on Saturdays, the Jewish Sabbath. (This has apparently been changed as of February 4, 2015.[102]) Criticism of this policy was the downfall of the last remaining newspaper of the Iranian Jewish community which was closed in 1991 after it criticized government control of Jewish schools. Instead of expelling Jews en masse like in Libya, Iraq, Egypt, and Yemen, the Iranians have adopted a policy of keeping Jews in Iran.[103]

Iranian Jews might be related to their desire for survival and led to their overselling of their anti-Israel positions. Their response to the questions regarding Israel have been outright denial of Israel or staying quiet. An example of the dilemma of Iranian Jews can be observed in this example :"We hear the ayatollah say that Israel was cooperating with the Shah and SAVAK, and we would be fools to say we support Israel. So we just keep quiet about it... Maybe it will work out. Anyway, what can we do? This is our home.

Palestinian statistics estimate 6.08 million Palestinians for that area,(From the Jordan to the sea)

Nevermind that they closed down the last Iranian Jewish newspaper for complaining about religious persecution.
Do Palestinians have any newspapers?
I wonder what we would see if we looked at Palestinian population figures would we see clear ethnic cleansing like the over ninety percent success rate of Iranian ethnic cleansing?
Let's see Arab population before 1948 1.3 million and how has the population been affected after 69 years of "brutal Occupation"?
Well this doesn't make sense ( if we were to accept your narrative that is) the population has grown to 6 million.
What is wrong with these Jews? They just don't seem to get this whole oppression thing

There isn't anything remotely similar happening from the other side???!!?
Are you kidding me?
Here is one example a multimillion dollar organization operating in the US taking the "other side".

CAIR and executive director Nihad Awad named as an unindicted co-conspirators in the Holy Land Foundation terrorist funding case, a designation that, in July 2009, U.S. District Court in the Northern District of Texas refused to remove and that was confirmed in 2010 in an appeal by the sister ISNA organization to the U.S. 5th Circuit Court in New Orleans.
Awad attended the Sept. 1993 "Philadelphia meeting" at which IAP president Omar Ahmad, and HLF chief Shukri Abu-Baker (now serving 65 years for terror funding) and others planned CAIR's formation as a U.S. Hamas funding agency.

For a deeper look into my assertion that Palestinians have received huge amounts of money check out the article this quote comes from.

The biggest single barrier to Palestinian growth is their violence against Israel, which forces Israel to impose closures and curfews.

Those who want to relieve the suffering of the Palestinians should concentrate on stopping their offensive, which would allow Israel to lift the devastating restrictions on the flow of goods. Restoring employment in Israel is an implausible dream for now, but if goods could flow easily, many Palestinian businesses could thrive. Reforming Palestinian governance the popular issue over recent weeks would also help, but in fact, the PA functions at about the same level of corruption and incompetence as most Arab governments, and those countries have had better growth records than WBG since Oslo. The main problem is the violence which causes closures and restrictions.

Sort:
[-]
qurator (76) 3 years ago
Qurator's exclusive support bot is now live. For more info click HERE or send some SBD and your link to @qustodian to get even more support.
$0.00
1 vote
Reply
[-]
everittdmickey (73) 3 years ago

Israel is our friend.
the other ones are not.
(by their own admission)
the course of action taken should be obvious.

@homerus is a socialist?

Some time ago I stopped arguing with people from the Left in South America, they have double standards, they oppose the interventions of the United States, but not those of Russia or Cuba, they say that in Europe there is no freedom, but they support China and Korea from North...

I find people with opposing views motivate me to write, usually he has better arguments but Israel makes people crazy. I'm still working on the country that is comparable (but way worse) than Israel that nobody(well not very many) gets angry at.

You will always find opinions against it is about Israel, it is a very controversial issue, I personally am against Israel, but I do not support Palestine, that is, I feel that the problem of the Middle East is not a problem of the West, nor of the United States, or Europe, and I believe that people, not politicians, are dragged into that conflict by Israel.

If you think its their problem .Would you agree they should just copy Jordan and go Black September on Fatah and Hamas(notice I didn't say on the Arabs)?

I could not understand your question: Could you re-pose it to me?

Are you Ok with the Israelis acting in a similar manner to their enemies?

Congratulations! This post has been upvoted from the communal account, @minnowsupport, by openparadigm from the Minnow Support Project. It's a witness project run by aggroed, ausbitbank, teamsteem, theprophet0, someguy123, neoxian, followbtcnews/crimsonclad, and netuoso. The goal is to help Steemit grow by supporting Minnows and creating a social network. Please find us in the Peace, Abundance, and Liberty Network (PALnet) Discord Channel. It's a completely public and open space to all members of the Steemit community who voluntarily choose to be there.

Excellent. It will take me a couple days to answer, there's a lot to read and I don't have much time tomorrow!

Please watch the video, its quite an eye opener what jews throughout the middle east went through leading up to the creation of Israel.