EOS, Mike Novogratz and the Psychology of Inflated Expectations Many traders around the world eagerly awaited the announcement.
One might say a little bit too eagerly.

The EOS Telegram group was flooded with people seemingly close to a mental breakdown over what they perceived to be a delayed announcement. After all, it was supposed to happen at '9 am Japan time' (which nobody ever said), and hours later there were still no news.
So for many hours, particpants in the chat contended themselfs with throwing around baseless speculation and false rumors about what the announcement was going to be.

Most people just named the largest company they could come up with and attempted to establish their wishes as 'confirmed rumor'. Others willingly took up their speculation, reinforced it and, soon enough, people actually believed their fantasies.

Seriously - If you were there you know what I'm talking about. It was a good example of a collective mania.
The price chart tells this story quite nicely: 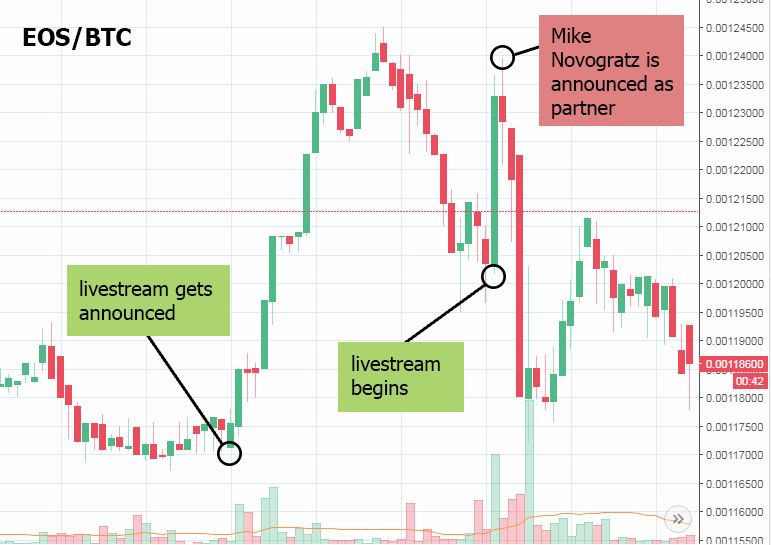 The crazyness started around 15 hours before the livestream, round about '9 am Japan time'. (Yeah this literally went on for 15 hours.)

At the time I was browsing on some EOS related twitter Channels and noticed an interesting detail. All of them were followed by billionaire investor Mike Novogratz. I also remembered, that he mentioned EOS on CNBC a while back in a supportive way. A few more details matched the case, and I decided to write a short post, speculating, that Mike will be the awaited VC partner.

I remember being pleased with my hypothesis, and so I was curious about how it would be received by the EOS/Steemit community.
My post quickly gathered around 400 views, as many people searched for more information on the topic.
But - noone left a single upvote, aside from an info-bot telling me about the price of EOS.

Honestly, I was quite disappointed and concluded that my idea was just not relevant. I was contemplating to delete my post, as it looked a bit embarrassing with 400 views and no upvotes. So how could it be, that no one else had considered him, and that everyone who came accross the idea did not take it seriously?

Why was it that most other predictions turned out to be far over-blown?

The answer to that, I believe, is rather simple.

People care about finding a way to believe whatever they want to believe.

So, when gaging the market, never trust the majorities' expectation.

I totally agree with you, if I saw your post earlier I would have upvoted for sure ! The chart represents perfectly the mindset of people by the way

yeah. It's pretty much pure emotion ...

Hi, you made a good post. Intresting that you had many views and so few votes while some posts regularly get more votes than views!

It's true there was a lot of rediculous calls on the Telegram chat People jokingly dropping names while others kept asking what time the announcement was.

It seems to be the behavior that goes with announcements of announcements, the hype and unrealistic expections started with hints and rumors of lots of big deals and jokes of legendary partnerships by members of the Block one team some weeks ago.

Announcements of announcements in a speculative market are made for one reason alone and "collective mania" if that is what it was is a part of that.

The price chart you posted does tell the story. thanks for sharing 👍

thanks for your comment. Yes indeed. It was very much the same kind of crazyness we had with the last announcement.

thanks for your deep insight about eos

I don't consider the news to be a letdown...good insight on your part though. Props

I don't do either! I just wanted to represent the madness around the announcement...

Thank you @n3r0 for making a transfer to me for an upvote of 9.41% on this post! Half of your bid goes to @budgets which funds growth projects for Steem like our top 25 posts on Steem! The other half helps holders of Steem power earn about 60% APR on a delegation to me! For help, will you please visit https://jerrybanfield.com/contact/ because I check my discord server daily? To learn more about Steem, will you please use http://steem.guide/ because this URL forwards to my most recently updated complete Steem tutorial?