Never Say, No One Warned You About Worldwide Mass Deception and the Globalization Agenda.

IMF's documents suggests "Central bank digital currency" (CBDC) may be a more efficient payment infrastructure while reducing costs to central banks...
There was mention of how the CBDC could implement a single new technology standard and possibly toppling private virtual currencies, (as the IMF believes hold a “monopoly of power” in the virtual currency payment system environment).

For me, the major issues are monopoly money and the monopoly use of armed force by institutions - and these documents reveal central banks' concern about maintaining their monopoly in the currency markets.
And speaking of the use of force, consider how taxation plays an important role.
Jim Rickards posted a very revealing report about how the globalists plan to abolish cash, titled:
"How Governments Can Kill Cash"

As if inflation, confiscation, and negative rates weren’t enough, the global elites are coordinating a new plan for global taxation. As usual, there’s a technical name for global taxation so non-elites won’t understand the plan. It’s called base erosion and profit shifting, or “BEPS.”
The BEPS project is being handled by the OECD and the G-20, with the IMF contributing technical support. If you’re interested in BEPS, there’s an entire website devoted to the global taxation plans and timetables. -Jim Rickards

Thus, as the war on cash escalates with the phasing out high denominated bank notes and the pressure on retail vendors to stop accepting and dispensing cash, you can see the writing is on the wall for the central banks to implement blockchain policies for virtual currencies.

...In the view of the IMF authors, the financial services sector is poised to make the change toward cryptocurrency involvement. IMF Urges Banks to Invest In Cryptocurrencies By Nathan Reiff June 26, 2017

The International Monetary Fund should create a digital version of its global reserve currency that could be more widely used across the world's financial markets and payment systems, a senior Chinese central bank researcher said on Tuesday.
Yao Yudong, head of the People Bank of China's Research Institute of Finance and Banking, said in a column in the state-backed Shanghai Securities News that the eSDR - the electronic version of the IMF's Special Drawing Rights (SDR) - would help address flaws in the current global monetary system.
Additionally, the role of the SDR should be expanded, Yao said, echoing suggestions made by central bank governor Zhou Xiaochuan in 2009.
His proposals include establishing a settlement system between SDR and other currencies, and promoting the use of SDR in global trade, financial transactions, commodities pricing and bookkeeping.
SHANGHAI, (Reuters) November 17, 2015 "IMF's Special Drawing Rights should go digital - China c.bank researcher" 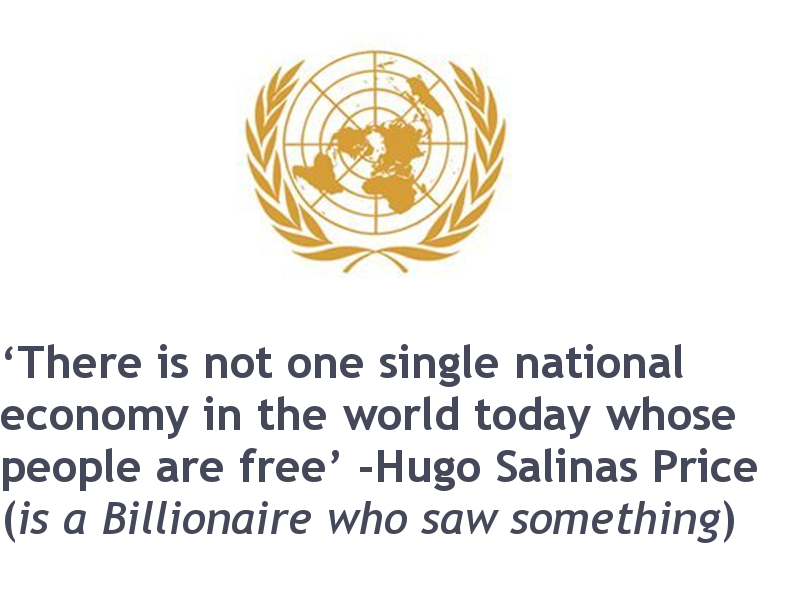 Evidence of The Globalists' Plans

G20 Vowed All Citizens Be "Digitally Connected" By 2025

Do You Want To Know What BitBay Is?

You Should Feel The Forced Herding Down The Digital Economy

If you find this information useful or of value then please share it with others.

In layman's terms, the IMF is gonna BUM-RUSH Bitcoin and all its BitBabyCoins.
In NFL football terms, the IMF has been put on the defensive of its power and is gonna BLITZ the Quarterback.
The FORCE is gonna come from OUR OWN BANKS and Governments.

@goldkey thanks for resteeming - my wish is for many of the blockchains' whales and programmers/miners who claim to want decentralized, free-market money/banking will begin open public discussions and collaborative efforts aimed at opposing the coming regulations and policies.

If not, they will probably cash out and the clueless little-guys will get screwed.
This information about globalization and the "reset" needs to be shared with everyone.

Thanks! This is great info. I have been advocating for people to confront the banksters on my youtube channel vis a vis our CUSIP numbers in an effort to defeat the banksters through a bankruptcy strategy... thx for all you do

@dakini5d Happy greetings, I am pleased to meet you - wishing you a joyful and rewarding experience with steemit. 😃
Yes, I've entertained the thoughts for legal remedy in an unlawful system, for return of negotiable instruments in a debt-bondage banking industry... yet my thoughts repeatedly return to a tipping point where awareness of the truth joins fed-up impoverished masses in a massive show of non-compliance with grassroots-leaderless boycotts.
Peacefully reject the institutions, stop supporting them, and stop feeding the beast.

I am currently conducting research on if Bitcoin was created by the intelligence agencies and if Blockchain technology is being used to enslave humanity, my research led me to your wordpress blog and your steem posts. Ron you have done some awesome work, you have made what I was seeking effortless. I operate a digital currency brokerage, and have set one digital currency free into the decentralized world, and about to release on second digital currency. The point is I am freedom loving person and want to do the best for America, then it hit me like a brick of what blockchain is all about, it is the NWO in the form of Technocracy. They created BTC, made up an elaborate story, and got the Bitcoin world to spread the blockchain for them.....

The only info I have not run across yet in your work is that Blockstream is now controlled by the Bilderberg Group. AXA Strategic Ventures, co-lead investor for Blockstream's $55 million financing round, is the investment arm of French insurance giant AXA Group - whose CEO Henri de Castries has been chairman of the Bilderberg Group since 2012 https://www.coindesk.com/blockstream-55-million-series-a/ ...

When I realized BTC and ETH where controlled by the Bilderbergs and the central banks had evil plans, I stopped development of a new ETH currency and created a new digital currency that has its own blockchain, is 100% anonymous (zcoin clone), and made it Proof of Stake with automated timed release of coins over a 15 year period. This way, no one controls our blockchain, and to my current knowledge all is 100% anonymous. It will be called 1776 Coin, and we are giving every freedom loving person in America free coins...

Ron, I own www.Freedom.social and www.FreedomTube.social, I am conducting a series of interviews before we officially launch the platforms. It would great to interview you on our new live interview platform. Please either join Freedom.social, and/or email me at [email protected] Last week I interviewed Richard Gage, and have several interviews lined up. Your research on this topic is sensational, thank you for your efforts.

Hi @clarkzkent
Thank you for being here (on earth and not Krypton - LOL) your efforts to Amplify Awareness (AA) worldwide are greatly appreciated. I am pleased to meet you and humbled that my efforts reached you; your kind words are flattering.

https://www.freedom.social/
A very informative video list at http://freedomtube.social/
This is the first I have heard of websites, looks very promising!
I will request a account to give it a trial run, okay?

True that the globalists are deceiving the masses about blockchain tech.
I'm willing to discuss this Age of Deception, if I can overcome the pitfalls of my old PC, which doesn't have a camera or skype installed.
I'm curious, why your profile is inactive from a year ago 'till today?

Though I have a long term presence on the blog side of the internet, I'm new to steemit and the blockchain tech with a simple mission:
Amplifying Awareness (AA) worldwide.

Strange how steemit (blogging) became my gateway into virtual cryptocurrency...