The altcoins are bleeding right now...

The reason being that the cryptocrowd are selling positions large and small in all altcoins to move bitcoin (BTC) in preparation for the two planned BTC hard forks on the 25th of October and 18th of November 2017. Why? Having BTC in your Bitcoin Core wallet before these two dates will guarantee you "free" coins in the other blockchains that will spring out of BTC.

This seemed like an intelligent thing to do for me, so I started my own migration from altcoins to BTC, not selling my beloved Diamond coins (DMD) of course.

But is moving with the crowd a smart thing? Is there such a thing as free lunches?

But everyone loves free lunches! But are free lunches really free? You will have to invest time and effort to go to where the free lunch was being served. And perhaps that lunch actually was not nutritionally satisfactory as you expected, not large enough portion or simply not tasting as good you wanted it to. Same thing goes for these hard forks; where people will get equivalent amounts of three different cryptocurrencies by virtue of just holding one of them before the fork happens.

The process of getting to a place where the free lunch actually gets served, meaning selling off altcoins and among them DMD coins, to get hold of BTC, people will actually be giving up on huge amounts of value in altcoins, thereby depressing altcoin prices and artificially increasing the value of BTC. Real people moving real money from something they believe in, for a quick buck.

Not fully realizing the implications of moving to BTC, I asked a savvy DMD developer for advice:
"What do you think of people like me, that sell their altcoins now to move into bitcoins in preparation for the coming 2 forks?"

His answer was:
"It's a complex trading stunt with high risc involved. Altcoins sold this way can't be bought back as cheaply as the time when the coin was sold (Helmut) " 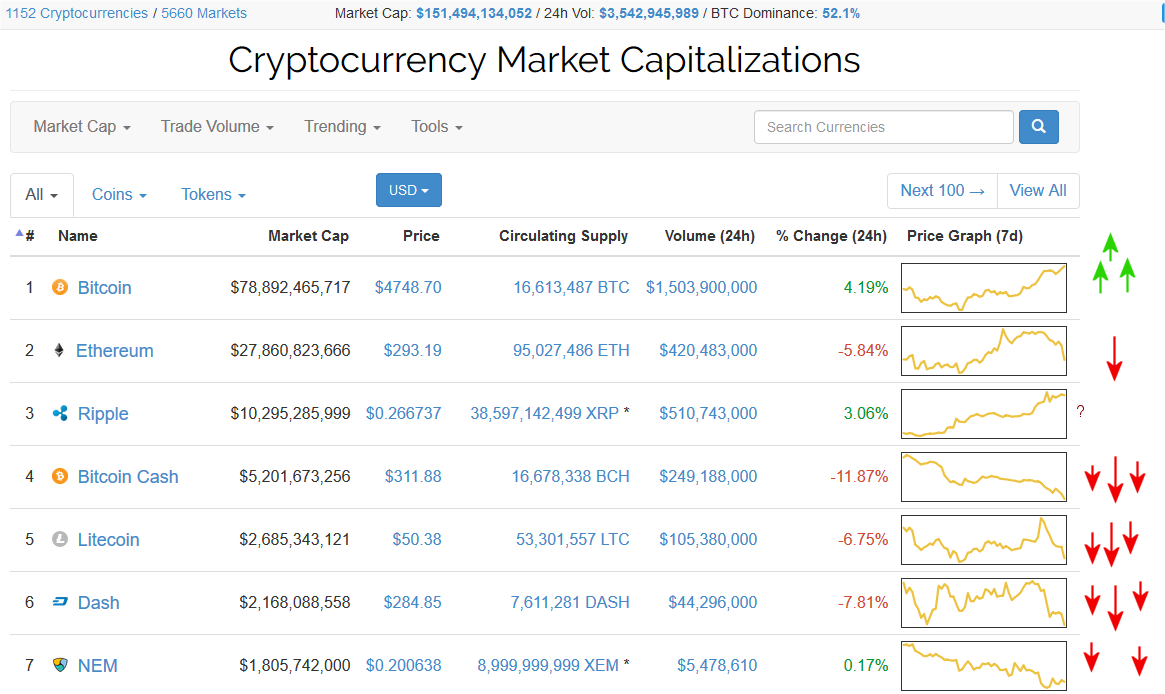 What happens after the forks?

People sell their holdings off, and try to run back to their altcoin shares that they previously were positioned in. But when they return, there is a large risk that the opportunities left before the fork will not be existing after everyone moves back into altcoins!

The way of the intelligent investor

The intelligent investor would now move countrary to market belief, especially as this hype is now unfolding, perhaps even moving in and buying the dips of one or more of the myriads of altcoins now tanking. Look for instance at my community and the price of DMD coins; DMD is a small coin with only 4.38M total supply, 2.5M coins mined, half of those 2.5M coins are held in masternodes, reducing liqidity, no pre-mine, no scams, POS, harboring an active and friendly community lead by knowledgeable and responsive developers. The price of this precious coin has dropped from 250000 to right under 200000 satoshi in just 1 week. Not because there is something wrong with DMD coins or any altcoins for that matter, but merely because people think there is a free lunch to be had with BTC now. In doing so, people are not truly realising the risks involved.

That risk being that if you move out of a coin now, the price might be MUCH higher when you try to come back to your beloved coin(s). It's sad to watch...

This is one of those times to move against the crowd. Are you a free lunch kind of investor or not?

Needless to say, I'm heavily invested in DMD coins so please do your research before drawing your own conclusion.
DrDMD If you're interested, DMD slack channel and ask for an invite and you will receive an invitation shortly.

DMD is an absolutely amazing coin, with a fantastic community. I have had a simply amazing experience with DMD, with them providing me a MasterNode in trade for the 'Legendary 10' address that I purchased from them nearly 2 years ago.

My small 5-7k USD investment back then, has turned into a node that makes on average 100 USD per DAY! Not only that, I've also had multiple thousand DMD coins left over from my initial purchase, which (unfortunately on one hand...) I sold to provide a down payment for my home.

This coin is by far one of my BEST crypto investments, if not THE BEST I ever made... and I think that this coin is going to have an even more amazing future.

I will be looking to re-buy every coin that I sold, plus a bunch more if possible, I know I won't be able to get the same prices, but that doesn't matter as much to me, as I think this coin has a future of 100+ USD value per coin.

This isn't advice, merely my experience and opinion on the project.

Thanks for your personal experience. I wish i would have found you 2 years ago. But better late then never. We have an at least 5-10x potential relative to BTC from where we stand now because of scarcity and security. DMD has the coin distribution of the top 50 coins. We aim to be one of top 50.

DMD is going nowhere is my guess! And yeah people try to sell free Gold haha. But who wants to but that? Better invest now in low altcoins and make tons of profit!

sg1spike, I beg to differ because of the following reasons: DMD coin has a great active community, we have our own whales holding for the long run, responsible and responsive developers, no premine, no cheating/scams, its an ancient coin, has been around for 3-4 years, again years, a VERY limited supply, its designed to buy and hold and generate wealth. And we haven't started our promotional campaign. Wait until that happens...Its not too late to get in, price is dirt cheap right now because of the reasons layed out in this article. Buy like 5-10 DMD, and forget them. Come back in 6 months and talk to us then. The developers are aiming for top 50 coins. Read my next article and follow up on this post. Thanks for your comment!

This only works if BTC will go up 4 ever! If BTC drops everything drop after it in some time!

Im thinking of buying and holding Ethd for atleast 6 months, I see good potantial in it. What do you think?

You need 100 K to start a master node, buy and hold this amount for 6 months and watch the growth.

I sold all of my ripple, I hold bitcoin, etherum, dash, dogecoin, Bitcoin cash, litecoin and bitconnect.

Thanks cryptoforce, i will consider that. I actually have a dayjob that stopps me from working fulltime with cryptocurrencies but in 6months to 1 year, i might actually go ahead and convert my posts to videos for all of interested people to watch. Or pay someone to do it.

Very good points taken.... As I am fairly new to the crypto world I appreciate any and all advice from you that have been in it for a while. I was one of those that thought Bitcoin was a joke when it was offered on the p2p sites..... boy am I kickin myself now.....

Were in the same boat, i got into crypto in the summer of 2017. Im kicking myself as well for being ignorant for years. But this is still the start. Buy yourself into cryptos with good teams and good active communities and youll be successful.

Right now the strong are buying out the weak...its sad to watch.

I did exactly what a smart investor is supposed to do haha
Invest in my lovely coin at cheap price.
But I wait for the crash just after the fork before investing my fiat into the market =)

Absolutely! You nailed it! Im also on the sidelines with my fiat=cash=USD=EUR to buy when BTC goes down. This article was about NOT buying bitcoins with your altcoins. Im waiting for a correction or a pulldown and then buy in. Its nice to know there are intelligent investors out there! Keep it up! I dont want to transfer more wealth to Jamie Dimon and his friends.

Haha big thumb's up for your last words ! Let's keep in touch and see what we will get when we will enter the market =D

Thanks for the info...

Thanks all for reading!

really thank you for your point of view which is surely something to think on.

Thanks for reading! All altcoins are bleeding right now. the thing is, the price of Bitcoin gold will be baked into the price of BTC and whales will be selling right before the fork...crashing BTC and Bitcoin gold along with everyone that bought. I might be wrong, but ive written it down here now. There are no free lunches. The money must come from somewhere. Markets are zero sum games. Only the strong and the resolute survive.

so according to your statements, altcoins will drop too immediately before the fork, hopefully increasing after it, and all those that sold them will found potentially higher pricess and re-buy time if a lot of people will follow the same rule. Isn't it ? And wouldn't the BitCoin Gold take only part of the Bitcoin value ?

Yes, this is what im thinking. I think that the BTC price we see now, Bitcoin gold price is baked into what you see in BTC right now. If you check Bitfinex, you can see the amount that Bitcoin gold futures are worth now, at the time of this writing 1 bitcoin gold future is worth 0.14 and falling. So at the time of the fork on oct 25, a bitcoin gold will be worth 0.14 BTC. That value will probably be lower at the time of the fork. Now how low will it be when EVERYONE would want to sell? So its like...no, there are no free lunches because the market is always ahead of us normal investors. Check out my newest post: https://steemit.com/cryptocurrency/@drdmd/finding-out-why-investors-park-money-in-banks-diamond-coins-dmd-and-bitcoins-btc Finding good information gets harder and harder, thats what its about.