Phew, I'm Done With My January Posting Challenge - And Here Are My Stats!

But what was really important to me is that this was an extremely positive experience and I showed myself that I'm capable of constancy on the Steem blockchain (despite the fact that I took 3 days off from posting as soon as my challenge was over). Doing this challenge was really rewarding as the Steem platform had to become an integral part of my daily routine and I thoroughly enjoyed constantly interacting with the community.

A Huge Thank You!

I was inspired to do this challenge by @deirdyweirdy and the way she aced the Alphabet Art Challenge and by @dragosroua who created his own January 30 Day Challenge. I really want to thank the people and communities who kept me going with their support. I really appreciate the most faithful reader and supporter I have ever had - @deirdyweirdy. I'm also really thankful for the highly reputable people who started autovoting my work like @crimsonclad, @ausbitbank and @discordiant - this is an honor that is truly humbling!

Of course, I also have to mention the awesome communities and projects who deemed some of my posts worthy of an upvote like @steemstem, @steemiteducation, @curie and @sndbox. Those projects and the awesome people trailing their votes were responsible for the majority of my January author rewards.

Thank you to everybody that ever took the time to read, comment or upvote a post of mine! It's hard to express my gratitude...

My Most Recent Word Cloud 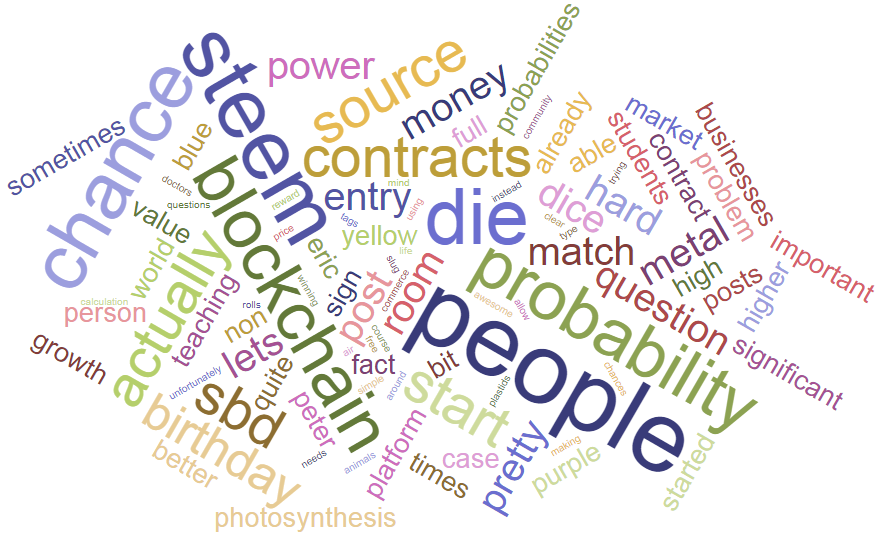 The world cloud created using my latests posts looks a bit different than last time I posted one.

During January I had the privilege of running two different contests which received more than 50 entries and allowed me to give away a total 16.84 SBD to 11 different steemians. Besides giving away some prizes, I also managed to get some as I was among the winners in contests by @sndbox and @digitalking.

You can view the stats of all my posts from January below (ordered by SBD earned).

Thank you for reading and for the support! I really appreciate it!

Hey man, your consistency is admirable! I would be happy if I could do 30 posts in 60 days :) Bravo and cheers!

Thank you! Let's see how I'll do in February. So far I'm 1 post in 5 days, so I don't think I'll be anywhere near ;) But I'll do my best to pick up the pace a bit without compromising with quality too much.

Wow, that was really something @rocking-dave! Posting every day for up to 30 days! I don't see my self being equal to such a task man. Kudos 👍

PS: I know the other my2017top5 challenge is still on even though the contest is over, right?
I've just made my own 2017top5! Do check it out pls 😁

Thank you for stopping by! :)