🗞 Bitfinex, Tether Get Subpoenas From US Regulators

Update: Nathaniel Popper, a reporter from New York Times, has claimed in a tweet that the subpoenas were delivered on Dec. 6 and not last week, according to ‘source familiar with the matter.’

Major cryptocurrency exchange Bitfinex and token issuer Tether have received subpoenas from US regulators as questions continue to arise about the latter’s ‘true’ value.

Facebook has updated its advertising policy, announcing in a blog post Tuesday, Jan. 30 that it prohibits ads that use “misleading or deceptive promotional practices,” which, according to the social media platform, includes ads of cryptocurrencies and Initial Coin Offerings (ICOs).

The announcement claims that there are “many companies” that use Facebook’s platform to advertise financial products, such as binary options, cryptocurrencies and ICOs, but do so “[not operating] in good faith”.

The largest bank in Russia, the state-owned Sberbank, has reportedly announced its plans to bypass the Russian cryptocurrency regulations and offer crypto trading to customers overseas. The bank is looking at trading pairs of the most liquid and well-known cryptocurrencies.

This week the Texas Department of Banking Commissioner, Charles G. Cooper, issued a cease and desist order to an alleged ‘decentralized cryptocurrency-bank’ called Arise Bank. The commissioner explains the startup unlawfully claims to be a banking institution and its operations must stop engaging with residents from the state of Texas.

🗞 Ethereum Now Has Its Own Self-Sustaining Pyramid Scheme

In the world of cryptocurrencies, there are plenty of scams, pyramid schemes, and Ponzis to be aware of. Unsurprisingly, there are also honest pyramid schemes which make no bones about what they are doing exactly. The PoWHCoin project, for example, positions itself as the world’s first autonomous and self-sustaining pyramid scheme. It’s an interesting idea and one that is seemingly receiving a lot of funding as well.

TRX won the poll for the listing on BitClude exchange
Space company partnership being announced soon.

"HardFork coming January, 2018! The new $THC will be more advanced and comes with many technological upgrades!"
THC will connect with new partners, fund managers and platform developers.

These 2 verified Stratis ICOs "will not start until at least the end of January". One of them is "an industry leader in China".

"Mainnet, 2018 roadmap, and introduce a number of DApps that will run on top of the ICON network"r 2018- Interoperability initiatives

"DNV GL will announce our partnership at London in late January, and we are excited to start the journey with DNV GL."

As expected, the STEEM is following the trend of the Bitcoin and we just broke one major support line on the STEEM : 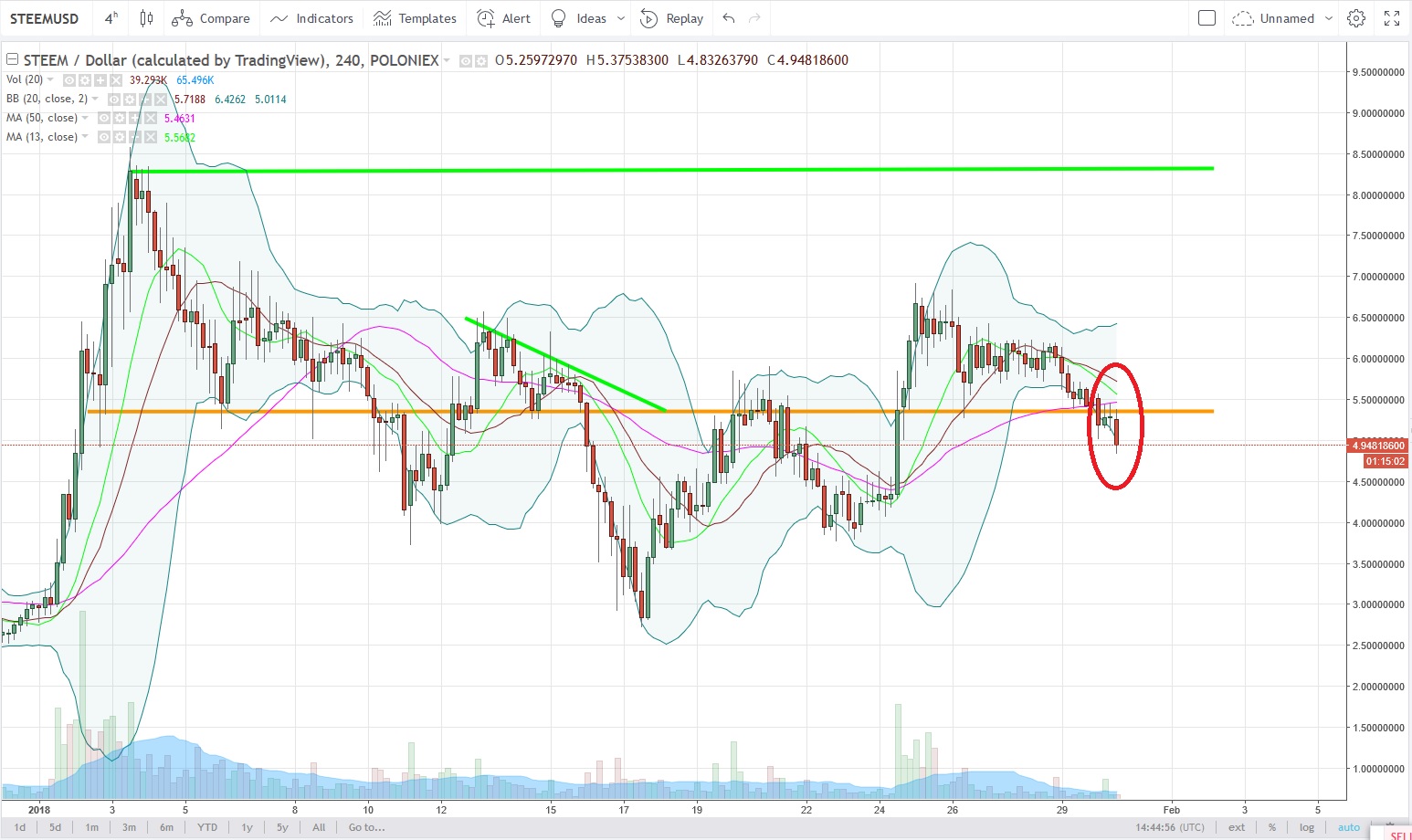 Let's see how the buyers will react in the coming hours. It could be a simple Head Fake before a return upper than this support line or it could be the start of a new correction after that long period of consolidation...

the subpoena was from 2 MONTHS AGO.
don't let wall street men play you like this...
this is obvious market manipulation
Here's an article about it...

You are absolutely right.

But yesterday they stopped their collaboration with an auditing firm which is already quite a worrying sign.

You guys should forget about Facebook steemit is enough does facebook pay you for blogging? No @oseval

Facebook has a daily decreasing audience (I look at the BigDatas).

It is just a matter of months before Steem or another Social Media Blockchain take over !

Thanks for sharing @vlemon. Funnily enough, I think that Facebook did the right thing - a lot of newcomers to the cryptocurrency market could lose a lot of money because of investing in scams. While they could have allowed some sorts of advertising, I think that in the long run it will benefit the genuine cryptocurrencies.

Also very interesting to see a potentially self-sustaining ponzi scheme being built on Ethereum's platform, although I will steer clear of it just in case!

Thanks again for sharing, would really appreciate your support on my Steemit Success Series.

I think they are. The issue is that people go less and less on Facebook nowadays.
Luckily, they acquired Whatsapp and Instagram a few years back that are performing well.
Take care

Fair point! I guess we differ on opinions but one thing is for sure, the market will recover from setbacks like this!
You too :)

You guys should forget about Facebook steemit is enough for us. Does Facebook pay us for blogging? No @oseval

Thanks for the update.. Thumbs up @vlemon

Currently, bitcoin, steem dollars and any cryptocurrency are worth less.
Why? Please inform me?

Damn sometimes facebook ads is always deceptive, they tend to tell this but its the opposite they are telling. thats a huge negative feedback to cryptocurrency.

have voted for you @vlemon

Thank you vlemon for making a transfer to me for an upvote of 2.33% on this post!

This post has received a 1.51 % upvote from @booster thanks to: @vlemon.

Sneaky Ninja Attack! You have been defended with a 5.13% vote... I was summoned by @vlemon! I have done their bidding and now I will vanish...Whoosh