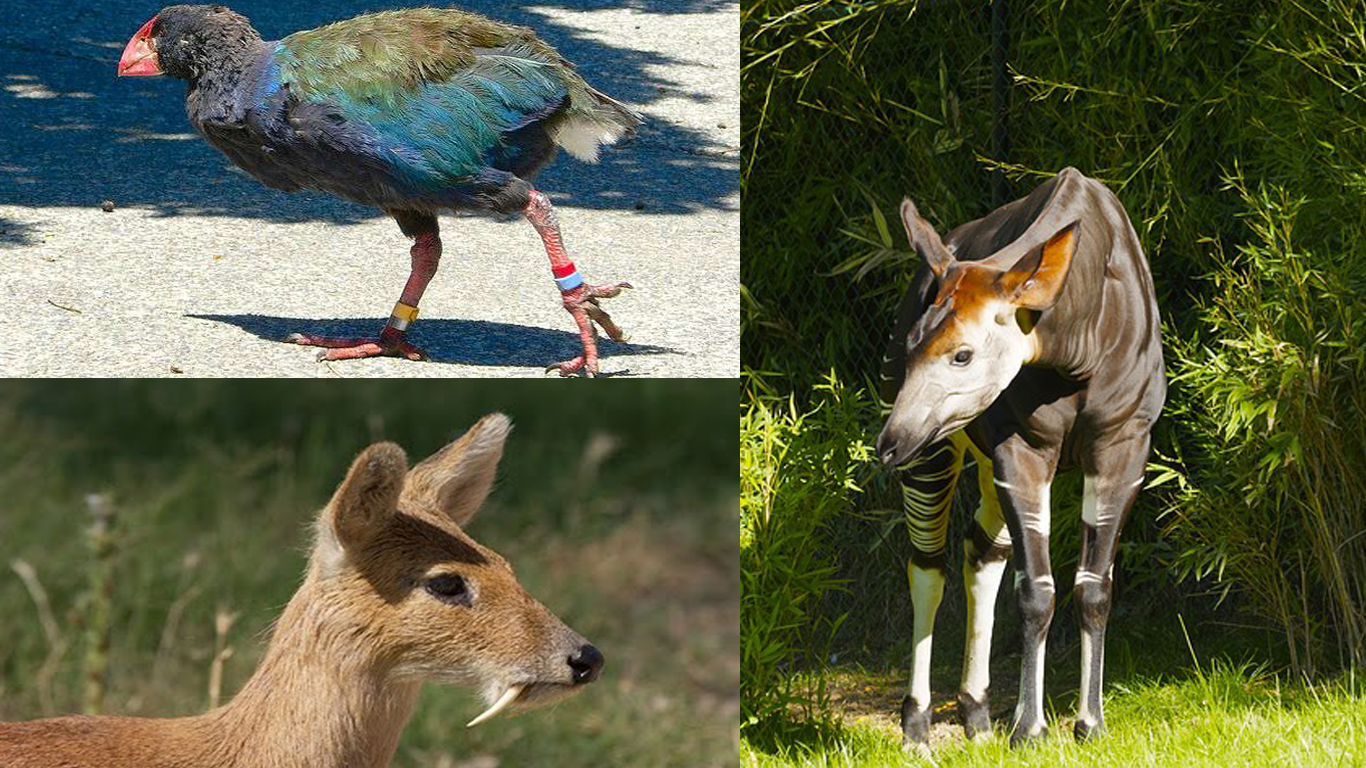 Hello My steemit friends, Hello fellow steemians! Hope you all are doing well! The discovery of the elusive okapi, once believed to be a mythical unicorn, was one of the most exciting taxonomic findings of the twentieth century.
To protect this shy, giraffe-like animal, wildlife conservationist John Lukas founded the Okapi Conservation Project (OCP) in 1987.
Okapi is a ruminant mammal of the same family as the giraffe, with which it shares some morphological traits. Like this one, its body is short and its hind legs are shorter than those of front. The male wears small horns covered with skin at the top of the skull during the first five years of his life. It measures about 1.80 m at the withers and weighs a maximum of 200 to 230 kg. The coat is dark brown, with black and white stripes on the legs and hindquarters, and a white color on the cheeks. Okapis eat tree leaves and buds, grass, ferns, fruit and fungi. Many of the plant species fed upon by the okapi are known to be poisonous to humans.

Examination of okapi faeces has revealed that the charcoal from trees burnt by lightning is consumed as well. Field observations indicate that the okapis mineral and salt requirements are filled primarily by a sulphurous, slightly salty, reddish clay found near rivers and streams. His place of life Okapi is native to the equatorial forests of Central Africa. He lives exclusively in a small area in the north-east of the Democratic Republic of Congo, the rainforest of Ituri. But it can be found in captivity in various zoos of the world. The breeding season extends from May to July, and clashes between males coveting the same female are common. The latter gives birth to only one baby every two years, after a gestation of 15 months. The young man measures 75 cm at the withers and weighs about twenty kilos. He does not leave the thicket which serves him shelter during the first two months, then begins to follow his mother in his displacements. He is weaned between the sixth and the tenth month, and reaches sexual maturity at about two years of age.

Okapi is exclusively herbivorous. It feeds on branches, leaves and buds that it sometimes picks up with its tongue, grasses, ferns, fruits and even mushrooms. He frequents saline and eats clay to find the mineral salts necessary for his metabolism. Okapi has been on the Red List of Threatened Species for many years. Surprisingly, it has not experienced the same rapid decline as the mountain gorilla, whose habitat it shares. In addition to poaching for bushmeat, deforestation and expanding mining operations in the area, Okapi is also a collateral casualty of guerrillas in the region.
Given the disorder in the area, it is impossible to predict the long-term future of many species that have become rare. If poaching continues, okapi could be on the list of extinct species in the next few decades. Because their population, which IUCN estimated at between 15,000 and 30,000 individuals in 2008, must be largely overvalued today.
If the okapi were to go extinct, it would be a great loss to the people of DRC, the okapi is their symbol of their bountiful biodiversity and wild places, and as a symbol of ICCN, it would be a failure that would be difficult to overcome and a foreboding for the other endangered species that require protection to survive such as gorillas, chimpanzees and forest elephants. For the world, it would be the loss of a living fossil that has lived on earth for 7 million years and the only living relative of the giraffe.

Thank you for stopping by, I hope you enjoyed. Please share your thoughts below and comment on what you think

Congratulations, your post received 5.67% up vote form @spydo courtesy of @aek081969! I hope, my gratitude will help you getting more visibility.
You can also earn by making delegation. Click here to delegate to @spydo and earn 95% daily reward payout! Follow this link to know more about delegation benefits.