Is @dan actually an anarchist? Are EOS Block Producers no better than Banks?

Let's lead in today with a recent story that Monero isn't actually as private or anonymous as we once thought.

Researchers have discovered flaws in Monero, a digital currency that boasts a high degree of anonymity, that could lead to the identification of users. From a report:
Monero is designed to mix up any given Monero "coin" with other payments, so that anyone scouring Monero's blockchain can't link it to any particular identity or previous transaction from the same source. But in a recent paper, a team of researchers from a broad collection of institutions -- including Princeton, Carnegie Mellon, Boston University, MIT, and the University of Illinois at Urbana-Champaign -- point to flaws in that mixing that make it possible to nonetheless extract individual transactions.

That shouldn't just worry anyone trying to stealthily spend Monero today. It also means evidence of earlier not-quite-untraceable payments remain carved into Monero's blockchain for years to come, visible for any snoop that cares to look.

I learned about this Monero casualty from a tweet by @dan (aka @bytemaster7) regarding privacy coins and government's laws and taxations...and it got me thinking... Now, I'm not saying you should or should not obey/disobey a government law or what you should do about your "legal share" of the taxes that they say you owe. I try not to tell people what to do.

But it seems interesting that Dan is, in a way, telling everyone to obey gov laws and pay their taxes, or at least don't place your trust in blockchains and coins that offer privacy in hopes that it's true and will keep your secrets safe from the government. .

As a self-proclaimed Anarcho-Capitalist, I thought that he would be in favor of helping free people keep their hard-earned money and he may accomplish this with EOS. One question I have is that with the amount of transparency, which the government (and anyone else) can track everything we do, isn't it effectively a honeypot for government surveillance? Does @dan think he can create such a system to put this level of information in the face of the government and basically tell them that they arne't powerful enough to do anything about it?

So privacy may not be an option in EOS. Sounds a bit ahead of it's time like Apple dropping all ports on their latest MacBooks ;)

That leads to my 2nd question....in a recent interview with EOSRAD.io, Thomas Cox of Block.one said that if they had consensus, the Block Producers could freeze your address (no transactions in or out are possible) and/or remove funds from your address. This is rly similar to how the banking system is built...one that I quit to go full time into crypto because people couldn't be taken from or shut down. Now, I'm all about arbitration and making sure people don't get frauded...but having the ability to force a transaction on a blockchain without the private key holders permission seems very strange and a bit disturbing. AM I MISSING SOMETHING HERE?? Is there not a better way to solve the fraud issue than busting in to someone's account and taking the money back? Maybe not, but I'm very curious.

Circling back to Question #1...what if the government and their friends in large corporation happen to be block producers and are able to extend influence over other BPs before they can get voted out. What happens if "you didn't pay taxes on this money that we've identified you own" ends up in your EOS wallet being frozen and money literally being taken out of your account?

I was also surprised when Thomas Cox said that Anarcho-Capitalism was a "young, male adolescent" trait and "heartless". Interesting. I get the premise, he's saying that if you find a "loophole" in the code (in Bitcoin for example) which allows you to do something that's technically possible, but not socially approved, then it's theft. In EOS, there's arbitration that can reverse and correct this theft.

For the record, I think that Anarcho-Capitalists are the most heartfelt and kind people i've ever met. Personally, I don't support the government's business model of theft and non-voluntary action. Everyone should have to earn their customers by providing so much value that the business relationship is voluntary and win/win. That said, I still pay my taxes and fill every year b/c I would rather pay off the mafia than go to jail.

I still very much support EOS and please don't take this post as any disapproval for the platform. It will be a real force to be reckoned with when launched, but I do have some concerns regarding the radical transparency approach and the ability of the "masters" (BPs) being able to take money from your account. Sounds like government-driven central banking. I know it's all voluntary and if I don't like the system, I'm not required to stay involved which is a HUGE difference b/t EOS and the US Gov. The key, I think, is to understand the meaning of “temporary ilusión”.
It doesn’t come down to Dan or Block One for people to start doing whatever they want and start fighting THE SYSTEM by themselves.
Dan’s tweet is more like the “... give God what belongs to God, and give Caesar what belongs to Caesar...” kind of message.
Being an ANARCHIST has nothing to do with fighting all the laws but to fight the unfairness of them, and that takes time.
TRANSPARENCY should be the goal just because that’s the whole idea of BLOCKCHAIN. 😊

You seem to understand me well.

Good point @melip. As I travel through airports and see all the privacy that government requires, I do appreciate @dan 's transparent approach.

Like I said, I think transparency is one of the goals of blockchain technology 😊

I feel your skepticism. Even with well-meaning concepts, as I hope Dan is trying to implement, I'm skeptical as well. If there is room for such abuse, I am quick yo agree with you on the topic of government interference. 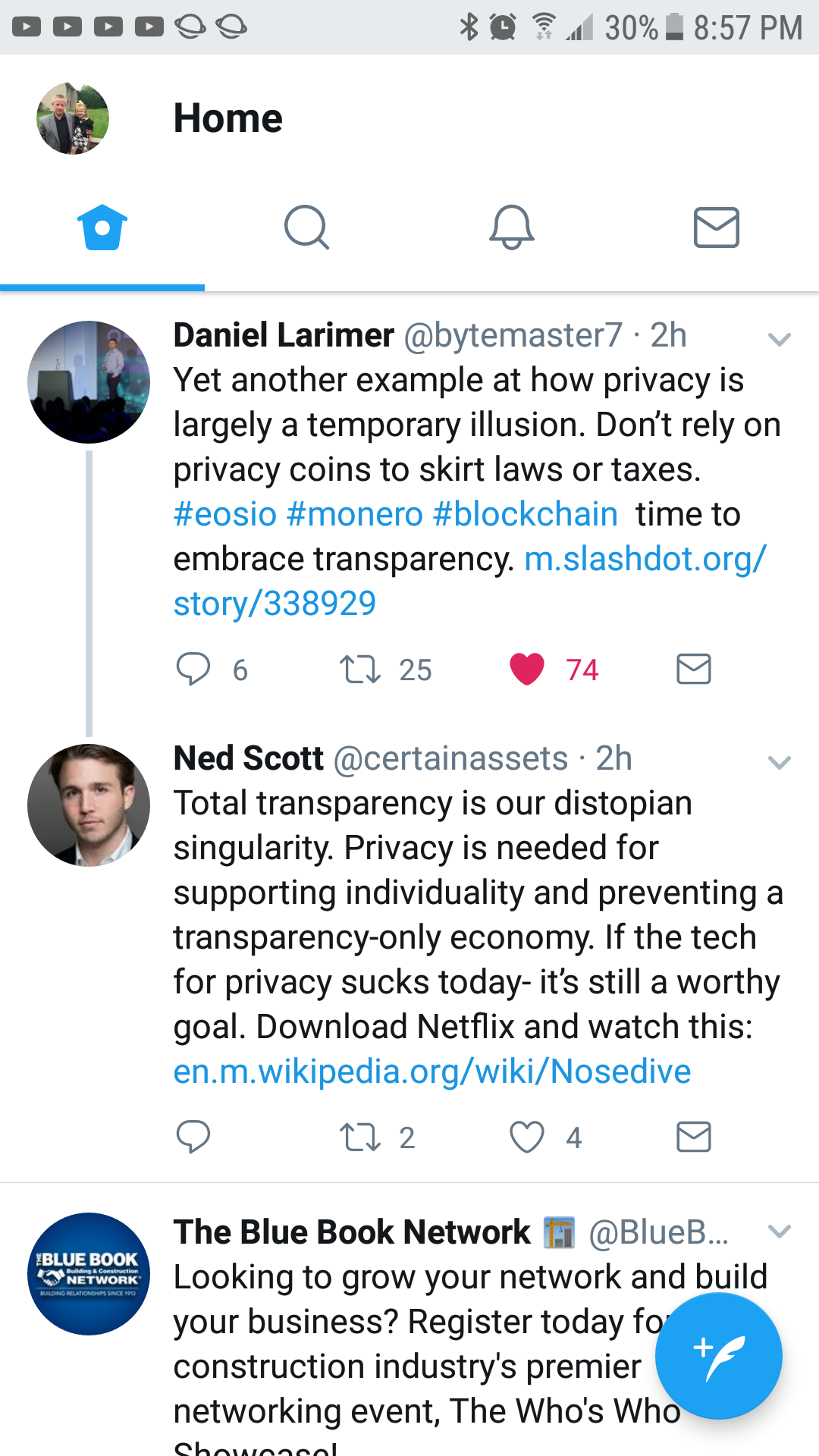 It's great that you are bringing this up. Although I consider EOS to be the best Smart contract platform I've been calling BS on @dan's Radical Transparency since Day 1. I've touched the subject here: https://steemit.com/privacy/@vimukthi/the-fallacy-in-dan-s-radical-transparency-and-a-nifty-scaling-solution-for-cryptocurrencies-that-can-also-create-heightened

I'd also like to mention that Zuckerberg was a big transparency advocate. I just hope all will be well. Having consensus to make changes to the blockchain is a necessary thing (Ethereum is a good example) but this is little too much.

As for Monero, It's just an unusable white elephant that would never amount to anything. It's a toxic community and it is the popular privacy coin with worst track record. I'm not surprised by the news at all. Monero has been at worse places.
https://www.reddit.com/r/dashpay/comments/65fz68/dashs_privacy_feature_has_never_been_broken_turns/
http://www.monerolink.com/

Thanks for the info. 100% upvoted and resteemed!

It will really come down to the governance model and what protocols BP need follow to retrace transactions. The main point of difference is banks are "centralized" and therefore can seize accounts for any number of reasons that may not be supported by the common person. Whereas in EOS the rules are set by the common person, therefore we would hope to see governance that is more balanced towards prosperity for all, not power for the few. Hopefully.

that's true, we can't vote banks in and out.

Oh, in my opinion this sounds interesting and concern too means we are thinking as everything is Decentralized but possibly we can see some centralized actions in the journey of Cryptocurrencies. Thanks for sharing and wishing you an great day. Stay blessed. 🙂

If enough of the block producers decide to do something; or "collude" if you will; they can do it on any existing blockchain. This should be no brainer I guess. It is not even worth to mention. Or am I wrong?

good point. I guess we are always at the mercy of the miners/witnesses/BPs.

Wondering why EOS wouldn't appease the Gov't in some way (much like Coinbase did/does) to be a complete success towards higher rates of adoption?

TOR isn't even anonymous- Carnegie Mellon (I think) accepted payment from the Gov't to crack the Onion Router). I have heard that law enforcement has higher rates of convictions when people try to use cryptocurrency to break laws instead of cash.

Yet another example at how privacy is largely a temporary illusion. Don’t rely on privacy coins to skirt laws or ta… twitter.com/i/web/status/9…

I thought about this some days ago and I think Dan was trying to explain this via the telegram group. I'll go back and check, I was busy that day, so couldn't follow up. Because this could cause problems with exchanges when money goes back and forth .

There are loop hopes everywhere but to overcome those one should by no means use unfair ways... This is real cheating if you do it..

There are always loopholes in the system but I think the system will be improved with time. Privacy is definitely at stake

Thanks for sharing! A link to your post was included in the Steem.center wiki article about Dan Larimer. Thanks and good luck again!