So you want to be a witness? (Clearing up some misconceptions)

Note: If you're not sure what a witness is, check out this article: Seriously, what is a witness? why should I care? how do I become one?

So you want to be a witness? You've been shown the insane amount of money made by top witnesses (a top 20 earns a whopping $400/day at current STEEM prices), and you want in on the gold rush?

It's not that easy. 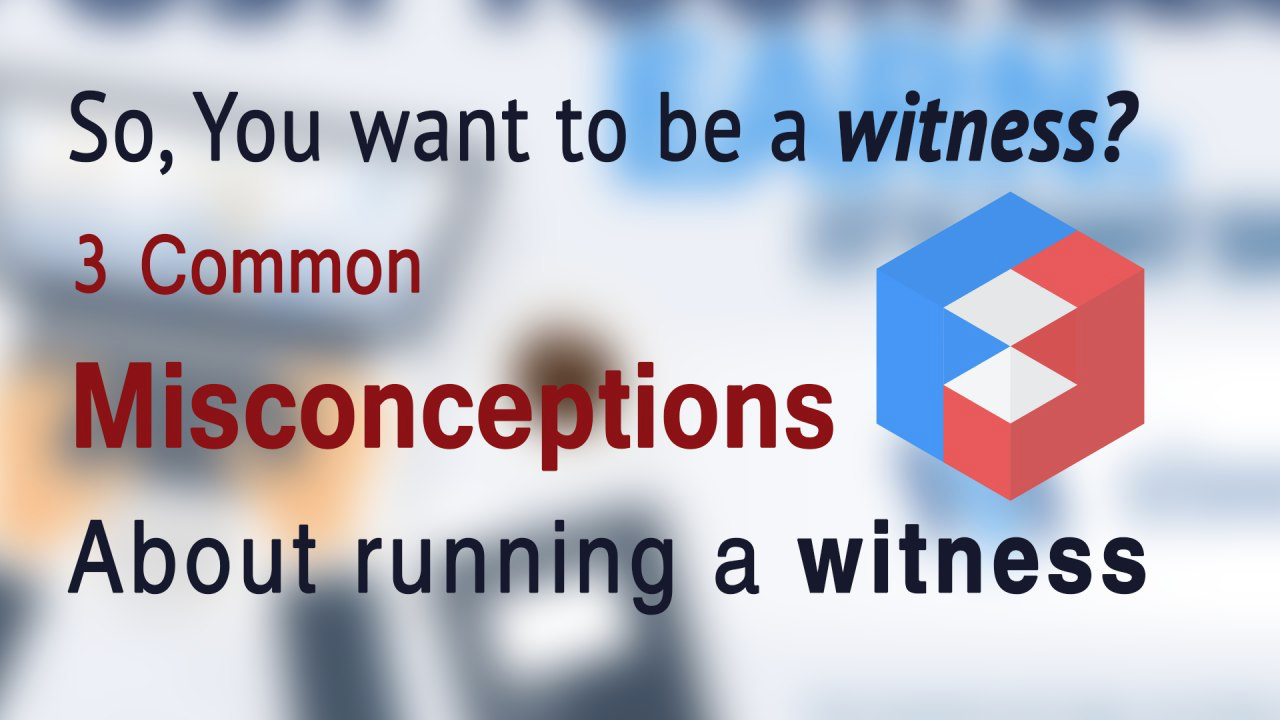 There's more to witnessing than just running a server. Some people like @svk have fallen out of the top 20 witness list, despite a functional witness. It's believed this is due to a lack of participation in the community, which is a core part of being a witness.

There have been a few "shooting stars" such as @charlieshrem who broke into the top 20 within a day of setting up their witness, but there are VERY FEW people who can do this. Unless you're a crypto celebrity, expect it to take a few months to break into the top 50, and many many more months to go higher than that.

Myth #3 - Running a witness is "fire and forget"

The STEEM software is inherently buggy. You should expect it to break every now and then, and have to get up at 4 AM to see why you're missing blocks. As you get higher in the ranks, you may even need to buy a second witness server to set up a back-up witness server, so you're not having to babysit it.

Combined with the fact you need to monitor the economy changes (sit around in the witness channel on STEEMIT.CHAT where this is discussed), to have a sane APR, account creation fee, and price feed bias. Not to mention Hard Forks which happen every few weeks, and are mandatory updates.

This means you need to have an active effort in order to be voted.

If you don't stay active, you will struggle to get votes, and may not even pay for your server cost.

@jerrybanfield has a good guide on getting witness votes. Check it out for more tips.

At the current point of time, a STEEM witness or seed uses the following (assuming shared-memory-file is kept in RAM):

At Privex, we have a 16GB RAM VPS for just $50/mo, which works great for witnesses, as well as 32GB Dedicated server for just $70/mo. The best part? You can pay for your server with STEEM. Since you'll be paid in STEEM Power for your witness activities, it's so much easier when you can pay your server bill without having to take it out of an exchange.

@someguy123 has a guide for setting up a witness server with his Steem-in-a-box.

Some people are not aware of seed nodes. While witnesses act similar to miners on Bitcoin, they produce blocks and get paid; seeds act more like a Bitcoin full-node, they hold and distribute blocks across the network, allowing for fast synchronisation, and transaction propagation. You can see a list and map of seed nodes at https://status.steemnodes.com (ran by @wackou).

Why should I run a seed if I don't get paid? - Running a seed helps the network. By running a seed, you show a deeper commitment to STEEM, some people such as @gtg only vote people with active seed nodes.

A feed script lets the network know, what price is STEEM to USD? This is important, as it controls the $ amount of post rewards, as well as the internal 3 day exchange rate used by the "Convert to STEEM" function in your Steemit wallet.

How do I know how many blocks I'm getting?

You can use SteemDB by clicking your name in the list (or searching), then going to Witness>Blocks. The image above shows @jerrybanfield's gradual progression up the witness list, slowly getting more and more blocks per day.

You can also use @bitcoiner's tool, which shows the block schedule for the top 200 witnesses: https://bitcoiner.me/schedule/?c=show200,includetop20

Running a witness is harder than some guides make it out to be. If you want to be a successful witness, the #1 important tip, is PARTICIPATE. Make posts, stay active on STEEMIT.CHAT, help out the community where you can.

I've seen blocks you people wouldn't believe. Attack flags on fire off the shoulder of Orion. I watched milestone posts glitter in the dark near the Tannhäuser Gate. All those moments will be lost in the blockchain, like tears in rain.

Dude that was great! I love Blade Runner!

Witnessing is a gradual fight to the top and if you play your cards right, you "may" be able to cover your server costs after a couple of months of lobbying and networking. The work that witnesses do is invaluable to the community and I express full gratitude to those who make this blockchain function smoothly. Privex + @someguy123's witness in a box is a great service for those willing to take the plunge. I have had lots of exposure to witnesses through my witness awareness series where I have interviewed @someguy123 @neoxian @timcliff @ausbitbank @theprophet0 @aggroed @dragosroua and more to come..Keep up the good work everyone!

Been running a witness for the past week. Can confirm. I started, not to get rich quick, but because a) I am techy and have been interested in this for a while, and b) because I have become more involved in the Steem community lately and wanted to help rep the people I've met who cannot run a witness or simply don't understand what it is.

Thanks for posting this and clearing up some misconceptions many people have. Resteemed to spread the message. Also, killer server service ;)

Cheers and Steem on!

While I do not want to be a witness. I do, however, LOVE reading guides like these, and getting a better understanding of how things work under the hood. It is great you are providing a rather cheap service for only $50 a month to help get those who want to make the great journey of being a witness a little easier.

It's topics like these that make things more understandable and relatable. I hope more people find the time to read things like these even if they never intended to run as a witness. Always important to understand or at least have a little knowledge in how things work and run.

Excellent points and I'm with you. Don't want to do the work myself but am grateful other take on the task.

This is the post the throttle steemians ahead.
I am thinking about witness
This is dedication.
Keep on steemit!!

Thank you very much for this updated guide and the link to my guide here!

This is BOLD... really nice to see people getting into the step up phase like this! Resteeming it ... I have been absent for a reason. I reveal it later.

Thanks for letting us know!

Sadly too late to edit the post, since it's more than 7 days old :(

how more can you help grow on steemit?

Wow I didn't realize being a witness consisted of so much! I feel like a lot of people are going to be turned away due the basic fact that they have to be constantly involved with what going on in the Steemit community!

I had no idea the witness position demanded so much time. Everyone says it is hard work, but no one explains it as well as you just did. Thank you very much!

There are lot of things to do with technical expertise.
Is there any better option for Windows users with GUI options?

Love the layout of your post. It's really neat. Good example for future blogs for me.

Generally witnesses forget who they serve. I have decided to withdraw my support for a few of them because of selfish behavior.

I am a newbie, I learnt so much from this post so I am going to follow you.
Keep up the good work

What a complete, well written, article on the subject.

I think I will re-steem too for you. A job well done.

I never wanted to be a witness. Too much work, much more than you can really earn :)

Wow, fantastic post... i'm a noob and have been learning slowly about the witnesses and made a few votes, great summary, thanks much, gl

After reading this, I definitely don’t wanna become a witness ;-)

there's a lot of post to like this, its clarify things about how to become a witness, and the our e making money of it, it sounds like easy money for the witness, then what can we do , we gonna say good luck, to all of you!!

Yes, I want to be a witness!

Thanks for a clear explanation as I have been wondering what is a witness and how they operate. Little by little am learning more about Steemit.

i know all of your posts are wonderful, and i read them @ronaldmcatee

very nice sir @privex! these are some of the things I hope to understand about being a witness!

The tech part is easy for me, i currently don't run a witness but maintaining a server is cake work. I love this community, i need to start engaging more. One thing i know for sure... i am no professional writer. When i invest in a coin/tech i always check how i can contribute to make it better. Well written post 10/10 would upvote again

THIS IS AN AWESOME POST. Thank you for clearing this up. I've wondered about it and now, I get it. Thanks man!

My greetings from aceh @bukharisulaiman. I am a newcomer in steemit. Information and experience from friends is very useful to me. Please guide me @privex

Congratulations @privex! You have completed some achievement on Steemit and have been rewarded with new badge(s) :

Do't witness, however, i love reading guides like these good article

If only there was a real documentation.

Is there any issue with the link for server rental? I click on it and it goes to order form but nothing happens? Any help please?

We're not aware of any issue with the order form at the moment.

What browser are you using?

Great post, useful info whether you are just interested in learning more or actually want to be a witness. Interested in the community, will see how it goes. Good job all.

Fantastic. I went into this with only a little bit of knowledge and have learned a ton in the short time my witness has been up. It's something that I intend to keep going as an example to my commitment to the Steemit community.