scottermonkey (61)in #voluntaryism • 3 years ago 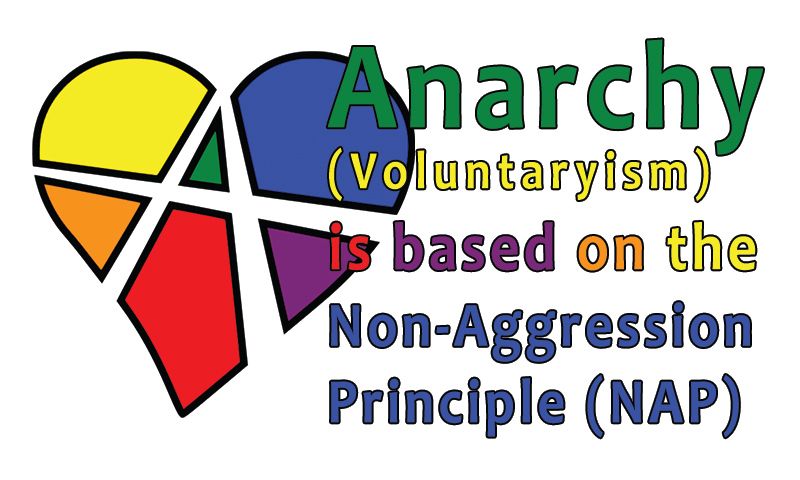 "But... I thought we need a government to force some behaviors so the weak and poor are not trampled under the boots of those with more power?"

It is a legitimate concern to worry about people taking advantage of those with less power. This is the number one reason a growing number of people wish to phase out involuntary government (hereinafter "government") and replace it with voluntary governance.

First: Notice how right now - with government - people are being taken advantage of and it seems to be getting worse? I want to make clear that our current system has not prevented people from taking advantage of other people. So yeah, the current system has some pretty big problems. Can I assume you do not agree with the USA's war on terror and the war on drugs? We share the horror you feel and we see, for example, how unfair and destructive it is to enrich the military industrial complex while slaughtering humans in far away lands. Please think about the shared values you have with us Voluntaryists; values for choice, fairness, peace, community, security, and consensus.

Let's talk about how we can have a system, without government, but with voluntary governance, where there is less opportunity for powerful people to dominate others because no one will have access to that monolithic system of force called government. An example of what I'm talking about is big corporations controlling politicians. Look up regulatory capture (link below) if you haven't heard of it. Note, in regard to domination, I said "less". While Voluntaryists would love to work toward a better world, we are not naive enough to believe it is possible to have a completely perfect world any time soon, and we are fine with that. So no, Utopia is not the goal; it's the direction. We don't want to deny people their mistakes and lessons. We want to remove as much incentive for- and doing of- intentional initiation of force as possible.

We can have a system where all rules are based on mutual consent, where people are free to choose to opt in or opt out of every service or plan, which includes: there are serious repercussions for anyone to use monopoly-like / government-like power against others. It also means there is no entity that has a legitimized use of force. Think about it. Our government has a monopoly on law-making, law-enforcement, national defense, currency, a near monopoly on education, and a growing monopoly on health care. What has this led to? Are we rich? Are we peaceful? Are we well educated? Are we healthy?

"But if you get rid of government, then corporations and gangs would be free to start coercing people."

No. Voluntaryism is not pacifism. Remember: we are talking about a purely voluntary region where there is no legitimization of initiation of force. You know, like we were taught in kindergarten. That means the minute a person or firm initiates use of force, people are free to band together and stop it. More here about that in the article here:
https://ClearSay.net/warlords.asp. In that article, I also discuss how a modern voluntary region can be safe from outside invaders. Voluntaryists share your concerns.

Also, "corporation" is a government protected entity and "no government" means firms no longer have the following government-sanctioned benefits:

Also, dispute resolution organizations (DROs) and private security organizations (PSOs) in a Stateless society will encounter a lot of skepticism and fear because people have experienced the Corporatism we have now, having thrown off the shackles of a big coercive central entity controlled by corporations. So the smart DROs and PSOs will want to contractually reassure their customers by agreeing to be bound by large bonds to be forfeited if their Voluntaryist code of conduct is breached. Heck, their customers will demand this.

Plus, their competition will keep them on their toes: consider the many competing DROs and PSOs that will surely flourish in a market free of government "protection".

Finally, peaceful solutions are typically more cost effective than violent solutions. Remember that cost is not limited to money; reputation matters, especially in this age of instantaneous and wide-spread communication. Which often brings up the following question:

"But if you have competing PSOs but the owner of one PSO secretly buys up a couple DROs and watchdog companies, what happens?"

Every time the DRO pronounces an unfair judgement or otherwise does not serve their customers' best interests, people talk. Word spreads. Again, remember, in a modern Stateless society, reputation has much more currency than it does in a system where powerful corporations can rely on the State to fight off their competition.

Some may still assume that without government, any oversight on an industry will suddenly vanish, in spite of customers still demanding same. Companies will form to address that demand and supply auditing services. Without a state telling producers and consumers, "this food is safe," people will have to do the research themselves or contract out that task to others. Some will take the risk themselves, perhaps in exchange for lower prices. Others will defer to auditors with strong reputations. Corruption in such an environment would cripple a business, as would practices like collusion. They'd have multiple class action lawsuits to contest when the malfeasance was discovered, everyone investing in them would be liable for damages, and so would the board for the ill done by the company. With so much risk, taking short term gains at the risk of long term survival is bad business model, and one doomed to fail without the crafty company having a state to influence and manipulate.

Another popular question: "What about criminals? With no police, criminals will do as they please. You Voluntaryists assume people will behave like angels."

We know humans are not angels. We assume all humans naturally want power and are corruptible, which is a big part of why we do not support handing people power-over-others in a non-consensual arrangement such as rulership. The short videos I've linked to here show some solutions to this issue in detail.

Prior to 1995 I was as Statist as any of you here. I grew up dirt poor and even lived in two communes. My mother and I hitchhiked and lived with whoever would take us in. I have a first-hand understanding of hardship, lack of privilege, and responsibility. By 1995 I began to understand the social and economic ideas of Libertarians. Then, in 2011, coinciding with the death of my father and grandmother, I started listening to and having conversations with some highly intelligent Voluntaryists (re-branded Anarchists) who inspired me to open my mind and study both "Keynesian" and "Austrian School" economics. These "Voluntaryists" then helped me see that:

The goal is for an emphasis on voluntary-only trade to lead away from war/theft and toward generosity coming from the heart. When you force a child to share their toys rather than leading by example, what prices do we all pay?

Please open your mind to these possibilities. Far from being selfish, Voluntaryists want the same things you do; peace, health, and prosperity for all. The power we want is "power-with" instead of the "power-over" that is causing so much poverty and violence in this world.

One of those systems I found in the two "Law Without Government" videos linked here. They total up to about 18 minutes. They explain one way people can have security in a Voluntaryist system.

These utopian ideas are fun to fantasize about but they will never work in reality.

Even in the US, you have roughly half of the population that are living like parasites off the backs of other people and still claim they are oppressed and blame the very people supporting them for that oppression. The so-called "poor", most of which are able-bodied, and choose not to work, continuously make bad decisions and never think of tomorrow riot and block streets, beat people up, and make demands.

The only voluntary government that these people would adhere to is similar to what happened after Apartheid ended in Africa. Of course, now that white farmers have been killed and/or driven out, Africans are starving... Smart move!

Yeah, but no thanks. The only voluntary government I'd be in favor of is one where it is legal and expected to shoot criminals. Because there will be criminals. We're all animals and some animals want to be more equal than others by violence and those animals have to be stopped with violence.

The point is that the criminals take over governments. That's how it works. It doesn't matter how wonderful of an idea you have either. The system, no matter what it is, will eventually be taken over by the oligarchs. Those people are far worse criminals than the street thug. Therefore, remove their monopoly on force, and put the biggest most violent gangs in the world out of business. End their system of control otherwise known as "government."

I always find it fascinating when people tell we that we need authoritarian government because some (or most) people are bad.

The "bad" people would never have any motivation to become the rule makers...

Thanks. Yeah it is hard to imagine how the USA could get from where it is now to a stateless society. Here's an article i wrote to address that very real challenge: https://steemit.com/voluntaryism/@scottermonkey/recipe-for-peaceful-revolution

Greetings from a fellow voluntaryist!

Thanks! Nice to meetcha! Following.

Come into steemit.chat with us, Scott! :)

Excellent article. Thanks for pointing it out to me. Resteemed. Followed.

Being an advocate of state-free societies, there does run the problem that they were eventually conquered because a mutual defense was not set up. In the American colonies, The Articles of Confederation was about as stripped-down government as there were even protected enclaves within places like Pennsylvania. All were conquered by the U.S. Constitution.

Thanks. That's a valid concern that i address here: https://www.clearsay.net/without-gov-warlords-would-take-over.asp

In chatting with @finnian it dawned on me that we've chatted on G+.

Voluntary military forces, traditional militia forces and mercenary units, used to be the norm. In colonial America, individuals could and did own entirely war ships, the most powerful weapon in the world at the time. There are plenty of examples of nation states on the planet today that have no standing army. The main reason for a standing army is to maintain power and/or an empire. No thanks!

George Washington, after the war, resigned his commission to Congress. He would later speak of the horrid dangers of standing armies. He was manipulated by Madison and others to attend the Convention and was quickly ushed to "lead." The Constitution was planned tyranny, and the biggest "selling" point was a strong centralized army and navy.

I am not advancing a standing army here. While they are expired, you might enjoy my American History series. I hope to continue them soon. I am currently juggling five plates which are heaped up.

Good ole George... That all happened, and then the Whiskey Rebellion occurred. ;-) Agreed. They kept Jefferson in France to their benefit too.

I have followed you, and I'll check out your blog a bit later today. Thanks! Join us on steemit.chat perhaps? Add another plate! haha

I gather that in your post extolling the supposed efficiency and fairness of libertarian anarchy, the concept of "property" and "ownership" are assumed, since every libertarian argues for the sanctity of "private property." From whence does the concept of "ownership" derive, if not from force, legitimate or otherwise? The premise of "non-aggression principle," upon which your argument is founded, is itself a fantastic contradiction of the entire libertarian argument.