Ancient Greek Delphi: the sacred oracle, the center of the Earth. Original text and 26 photo. Part one

Do you know where the "navel of the Earth" is, it's very center? This is a very interesting story, which I continue the series of stories about my trip to Greece.

Today we will talk about the ancient city of Delphi, in my opinion, the second most beautiful place in Greece, after the flying monasteries of Meteors (here I already talked about this miracle of the world).

If you are my regular reader, you must have seen my drawing of the statue of Apollo and read the story of his battle with the dragon. The fate of this god is directly connected with the city of Delphi. Let me remind you that Apollo is the illegitimate son of Zeus and the titanide Latona (Summer). The lawful wife of the thunderer Hera, after learning of the treason, sent for the unfortunate pregnant titanide of the terrible dragon Python. Fortunately, the dragon failed to comply with the order, he settled on Mount Parnassus, which belonged to the goddess of justice, Femide. The dragon lived happily, wrapping the mountain with nine rings of huge body and exuding a terrible smell. Python guarded the ancient sanctuary, which was located in the heart of the Earth. And this center was determined by Zeus himself, launching two eagles in different directions of the world. The birds met, struck each other's breasts exactly in this place, and Zeus threw a sacred stone of conical form on the slope of Parnassus. The original stone - "omphalos" is now kept in a nearby museum (I'll talk about it in the next post), and at the most sacred place of the Earth, in its center, there is a concrete copy - "the navel of the Earth". And what other material will withstand millions of touches of tourists who believe that the stone brings good luck ;) The idyllic life of the dragon on Parnassus would have continued if Apollo, having been safely born and grown up, had not decided to take revenge on the dragon for the persecution of his mother. The young god found the dragon Python, and in an unequal battle he killed with golden arrows.

Apollo has not been forgiven for murder, he was punished for this deed by an eight-year exile on the mountain where he committed the crime. Apollo, having been cleansed of sin in the holy spring, received from heaven a "drawing" of the temple, which was to be built in honor of Python. According to myths, the first temple in the most holy place of the Earth was created from the laurel. The bones of the slain dragon were placed in a vessel-tripod, on which sat the oracle, predicting the future. In connection with the prophecies of the oracle, in various sources, I found several assumptions. According to one version, the oracle passed the messages of Zeus (or Apollo) to people, when he was in a state of trance. To the necessary for the connection with the gods, the oracle breathed gas (steam), which rose from the depths of the earth, just in the place where the temple stood. According to another version, the oracle drank water from a nearby sacred spring and chewed laurel leaves to communicate with the higher mind. Modern studies do not confirm the presence of clefts at this point of the rock, which may give rise to toxic gas. Perhaps the priests of the temple set fire to a certain grass, setting up smoky veils for greater mystery and maintaining the myth of the slain dragon and its fetid breath. By the way, it was in his honor that the priestesses of the church were called Pythia.

Despite the punishment of Zeus, Parnassus the wise Femide given to Apollo. According to myths, it was he who drive here the first people. Turning into a Dolphin, Apollo showed the way to the fishermen who were in distress at sea. For this wonderful transformation, Apollo received the prefix Delphi in his name.

Be that as it may, the city of Delphi owes its prosperity to the Pythian oracle. Wanting to get a prediction, people from all corners of the world began to come to Delphi. The temple in which the oracle was located was repeatedly rebuilt, first from wax and copper, then from volcanic tuff. The ruins of the temple, which we can see today - its latest version, built of stone in 330 BC. Delphi are developing rapidly. Every oracle visitor brings generous gifts, paying for predictions. Gradually around the temple there are hundreds of treasures of jewelry, weapons and other riches, statues are erected. In the museum drawing-reconstruction we can see what the ancient Delphi looked like. Cubic buildings in the foreground are treasuries. Here is one of them, almost completely recreated by archaeologists. 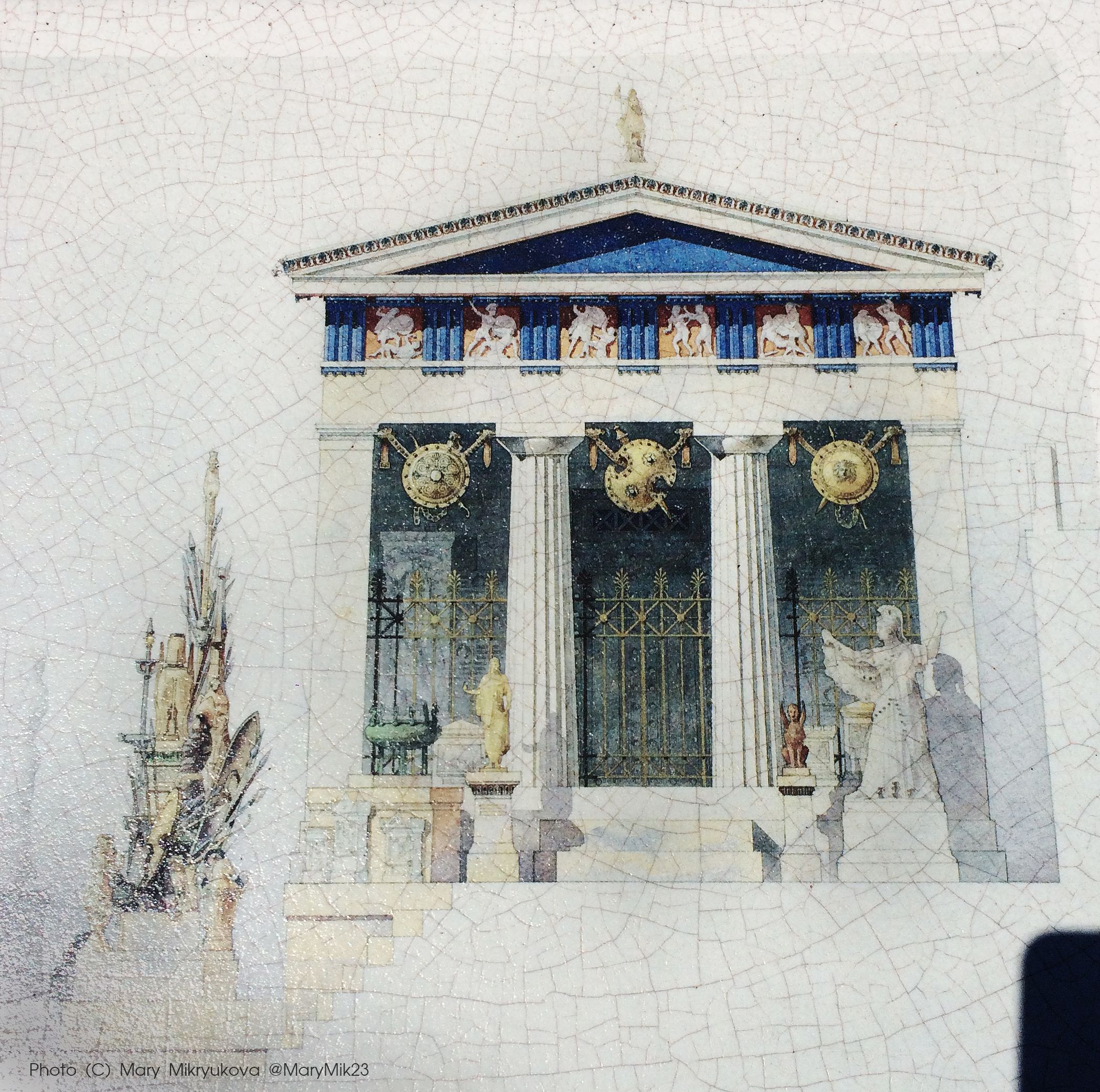 Millions of people came to Delphi and left inscriptions on the walls, which have survived to this day. You will experience great excitement when you touch them. The priests of the Pythian oracle spread throughout the city, collecting valuable information. They actively used the data, interpreting in verse form unrelated mutterings of the oracle. So the Trojan War and the Argonauts' campaign were predicted. Been by the predictions for the father of Alexander of Macedon - King Philip. The prophecies were very vague. There is a legend that King Croesus addressed the oracle with the question of the war with Persia. The Oracle replied: "If you cross the river Galis, you will destroy the great kingdom." Croesus decided that the kingdom was Persia, but he was mistaken, having lost the war. Later he reasoned that prophecy on the contrary warned him don't start a war.

The prophecies of the Pythian oracle were listened to until the spread of Christianity and the official ban on prophecies and pagan rites in 394 by Emperor Theodosius I. But even today, various abnormalities are observed in this place: electrical appliances are going crazy. Fortunately, my smartphone worked perfectly and I was able to make beautiful photos for you! This is the cradle of Europe and today Greece is regarded as a burden of the EU.
Have you ever heard the music of the great Mikis Theodorakis and read the story of the life of this Greek man? He composed the melodies for Alexis Sorbas. I love very much his late compositions like "East of the Aegean" (Piano and cello). Your post makes me longing for this country.

Tomorrow I will publish a continuation of the story of the Pythian games and theater. Greece needs to be maintained and maintained, this is a great story.

I will definitely listen to the music you recommended, thanks!

So true! And one day I have to visit the land of the Gods.

I invite you to watch the second part of the post about the Pythian games. And thank you for subscribing, it's very nice and important for me!

Thanks. Another profound article. I didn't know that the Pythian games are still alive. I like the theater in this beautiful surrounding. Watching a performance over there must be marvelous.

Yes, Pythian games are now called Delphic, you can go to their site, there is a version in English.
In many ancient amphitheaters concerts are held, usually this is a spectacular sight. I do not know if there are performances here.

@marymik23, stunningly beautiful photos and text content. For all my love of history, I couldn't tell it like you.

Thank you @vipnata! I was shocked by this place, so I read a lot about it. After the Meteors, this is my second favorite place in Greece. Have you been there, too?

I like Greece very much, but I was not unfortunately in Meteors.

If you go to Greece again, be sure to visit Meteora. Have you seen my post about them?

No problem, here it is. Please write to me when you read it. There are two parts.

@marymik23, You have done a great job to tell us about this amazing place. Very bright, beautiful, Sunny. I read with great pleasure. Thank you!

Thank you @madlenfox! Tomorrow I will lay out the second part about the theater and Pythian games ...

Thank you, I will gladly look into Your blog to read it :)

Good afternoon! The continuation of the story is published, I invite you!

Thank you for inviting me :)

And have also received a 0.27 percent upvote.

Wonderful pictures. Thank you for your good eye and care.

Thank you for your comment. I'm glad that new posts have appeared in your blog )

Great post about this beautiful place, coming with the story behind! Looking forward to read about the Pythian games. :)

Thank you! The second part of the Pythian Games is already posted and waiting for your reading )