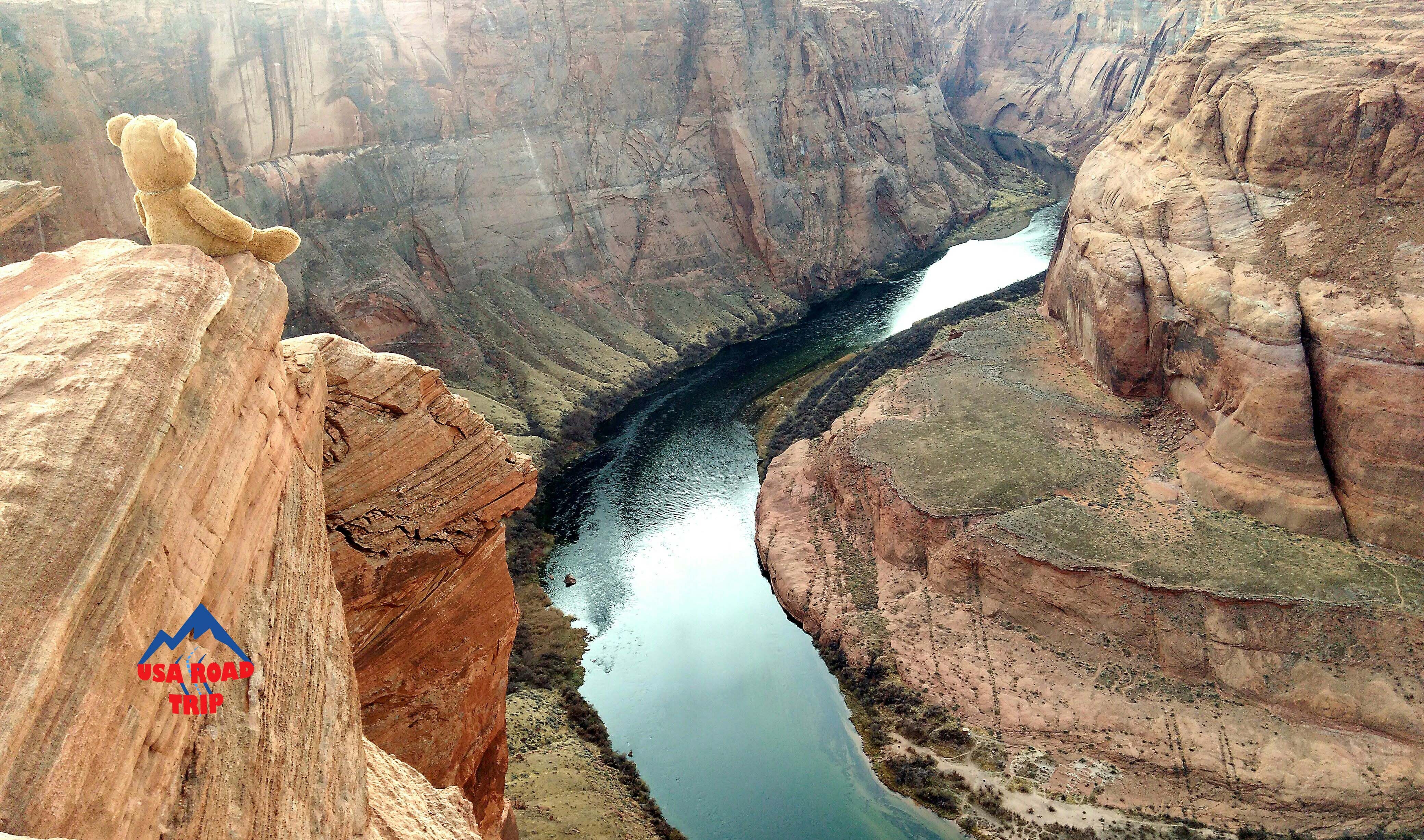 After the spectacular Grand Canyon, I headed to the town of Page. It is the base of two of the most popular sights not only in Arizona but also in the whole country – Antelope Canyon and Horseshoe Bend. As it is only possible to go with a tour to the first one, I have spent quite a lot of time researching wheatear there is a similar place where I can go unguided. It turns out there are places. In fact, Grand Staircase-Escalante National Monument is full of them, but none will give you the feeling of the Antelope Canyon. And you won’t see the others as a background on your Windows (:. 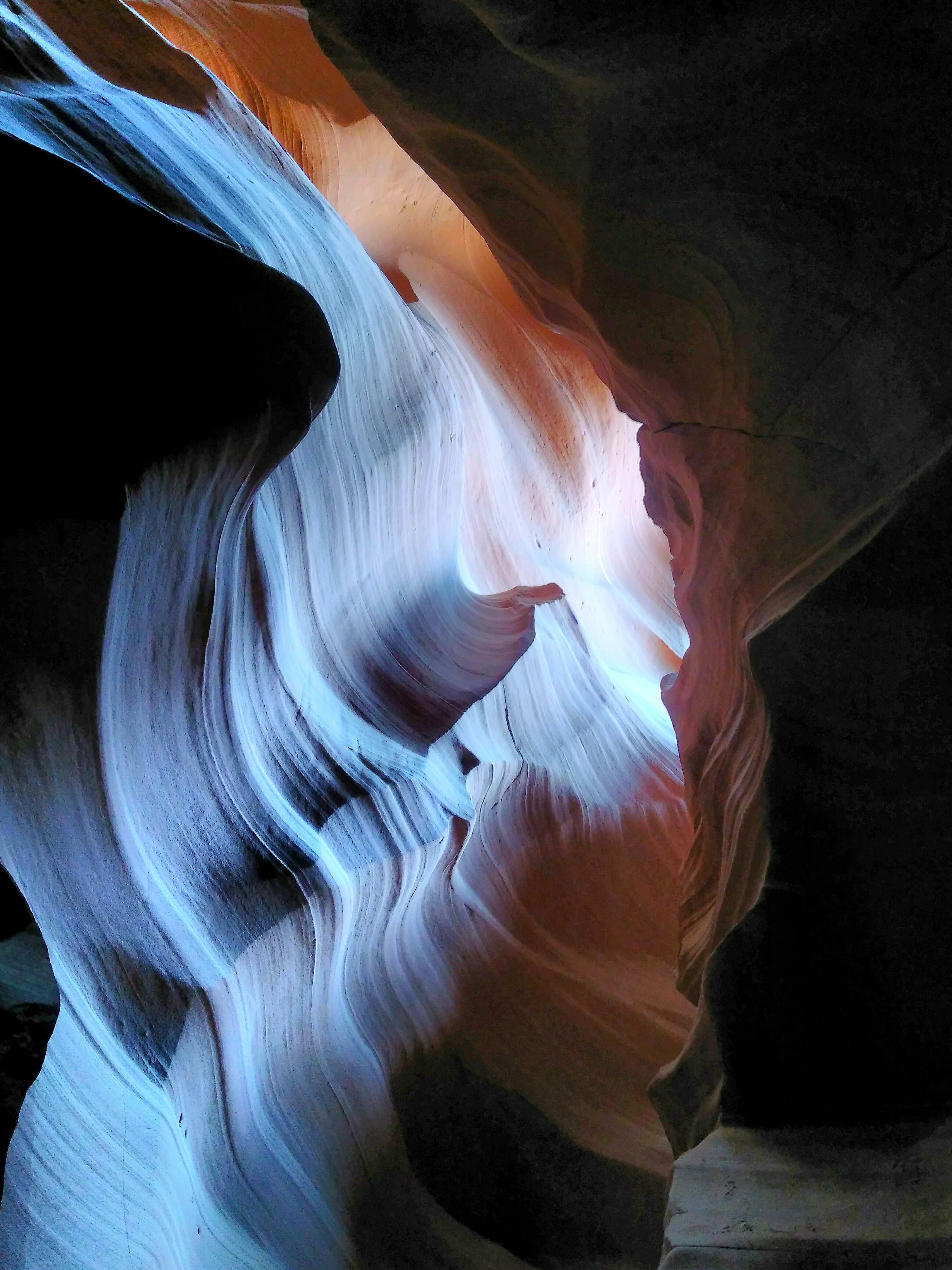 There are two canyons – Lower and Upper. I had to choose which one to visit and the better choice if you can visit only one is the Upper one. The price of the tour is fluctuating and the average one needs to pay is $40. I checked with a few agencies and finally found one with January discount (: - Antelope Canyon Tours - where I paid only $32. The tour is about an hour and a half long. It starts from the town driving the participants to the entrance of the slot canyon. 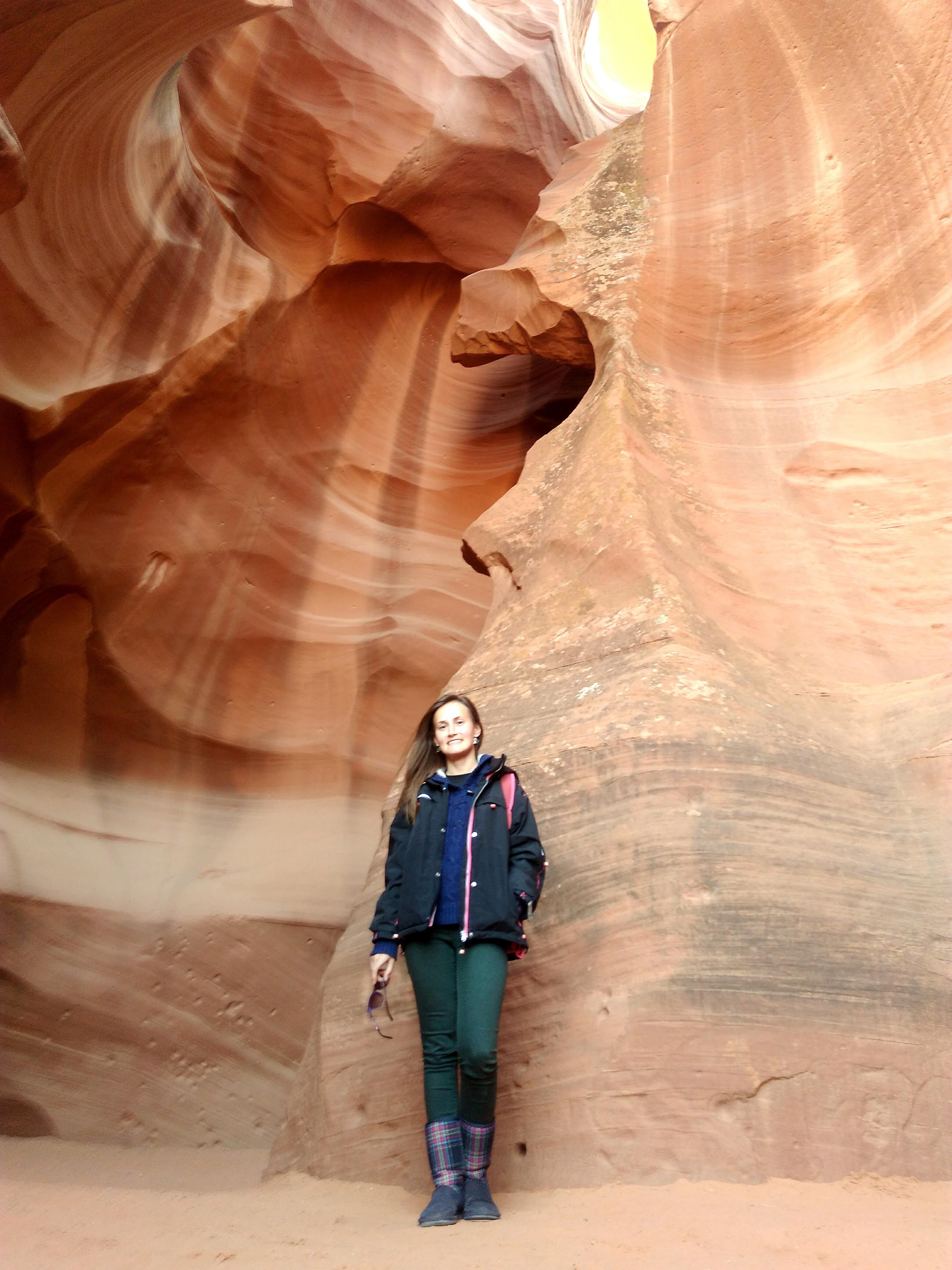 It is an easy walk in the canyon and most of the time spent will be taking pictures. I liked the organization inside. The guides have places where they stop with the group allowing everyone to take a picture. The lady which was guiding us was really nice and showed us all kind of cool places to do a nice shot plus the best way to be done. It is a difficult task to take a picture in Antelope Canyon. There is almost no light and without the proper gear, all the images come out blurred. 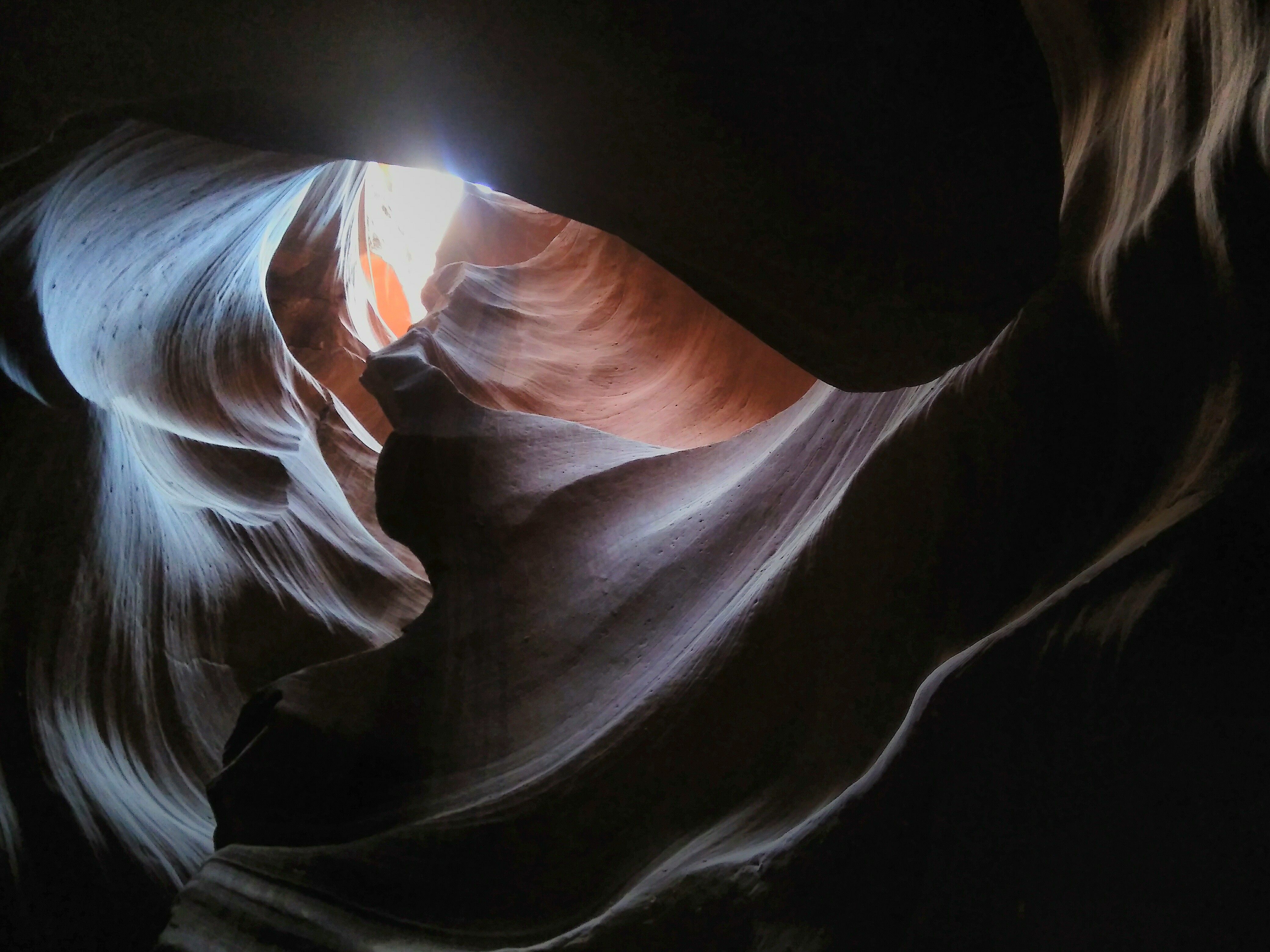 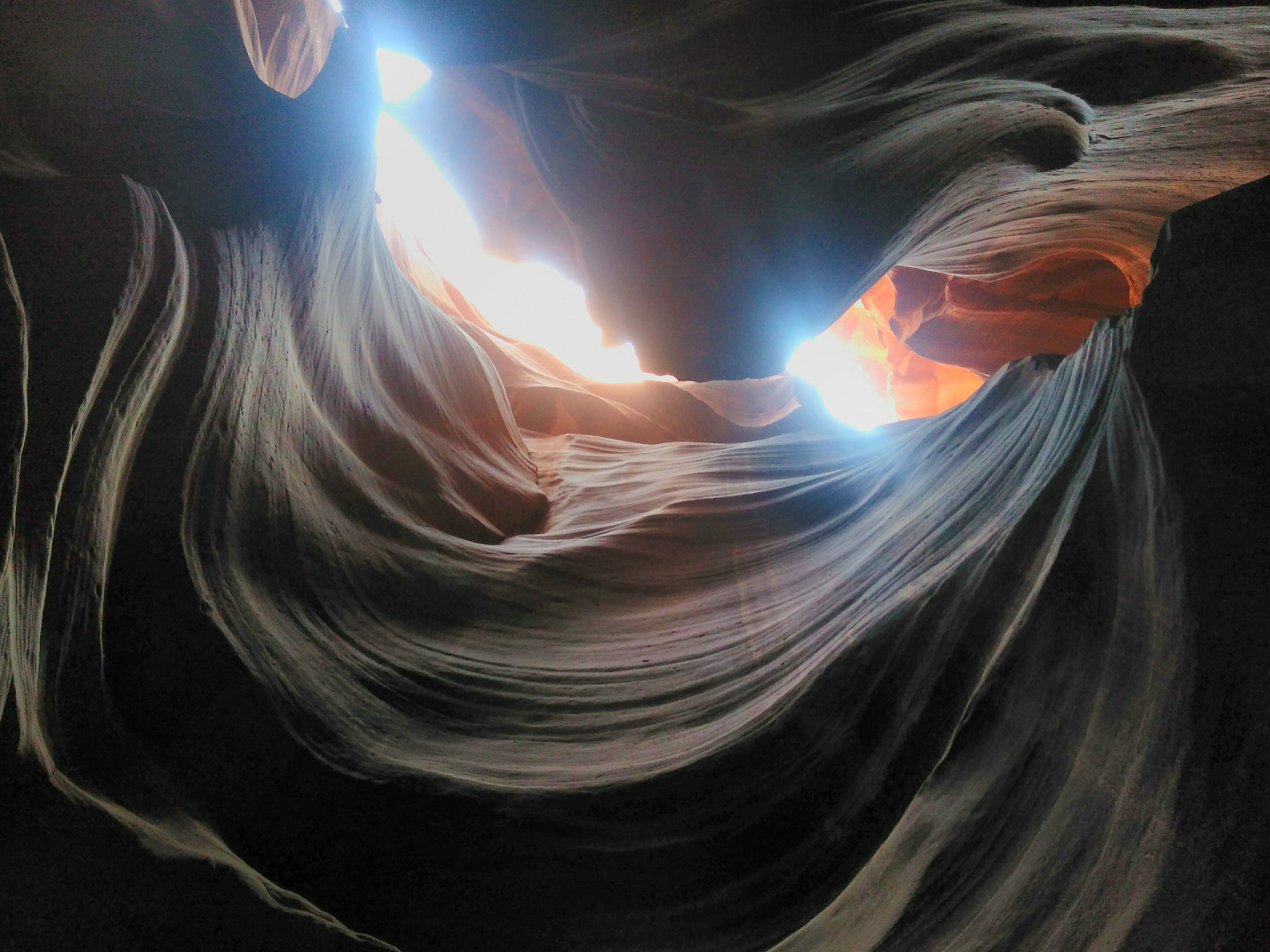 It is important to choose the right time to go inside. Winter time that would be in the middle of the day – don’t go with the first or the last tour, as it will be even darker than on my pictures. To overcome the problem, the agencies have special tours for photographers – a little bit longer and with a permit to bring a tripod. There are no other benefits than those, so unless you are shooting professionally and planning to use your pictures in some other way, than just posting them in social media – maybe it is not worth to pay more than $100. 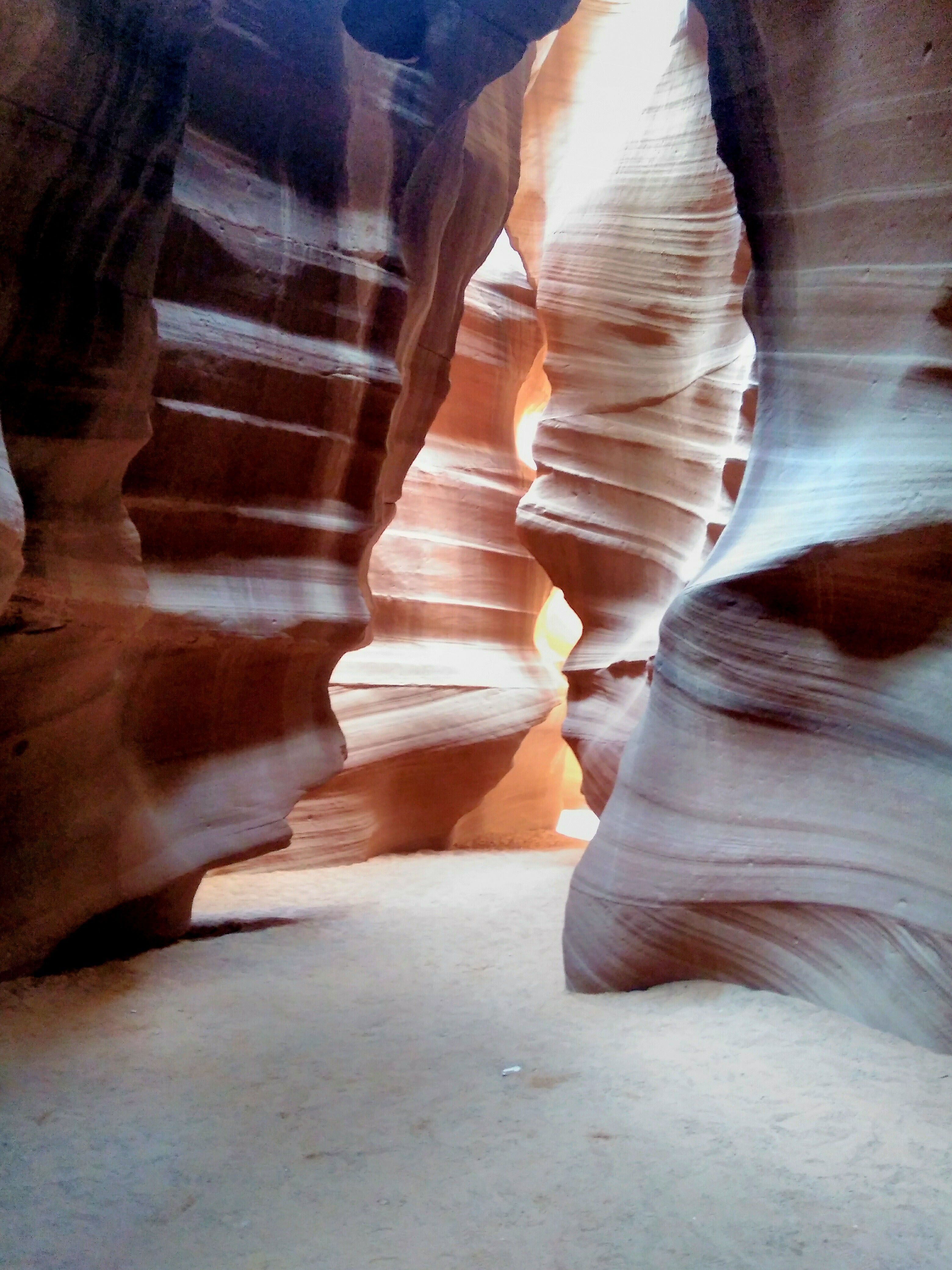 My tour ended at about 3 pm and 30 minutes later I was on the way to the Horseshoe Bend Canyon. It is a short walk to the spectacular Colorado Canyon. I took my bear and we hit the road. Everyone likes to have a picture on the edge of a cliff and look fearless. Don’t do that on this canyon, as there were people falling from the same. I only risked my bear’s life. It didn’t mind (:. 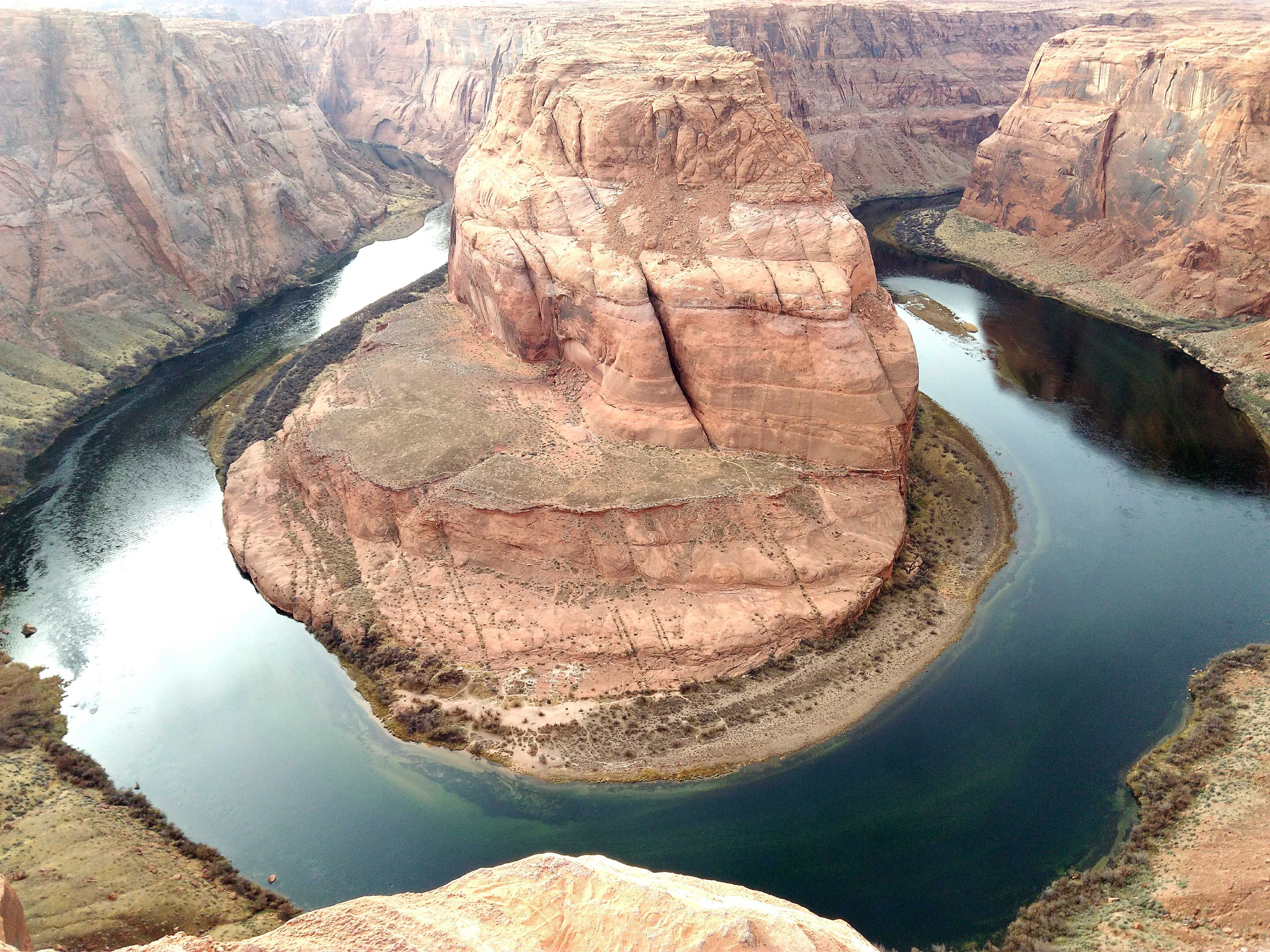 I had a great day and truly enjoyed the things I have seen. Anyway, those places were on my list long before I leave my country for this road trip. Plenty of alternatives could be found in the area and I would recommend to everyone to not stop only with those two. After all, the Antelope Canyon was only discovered in 1931 by a young shepherd girl. Maybe there are more hidden treasures to be found. 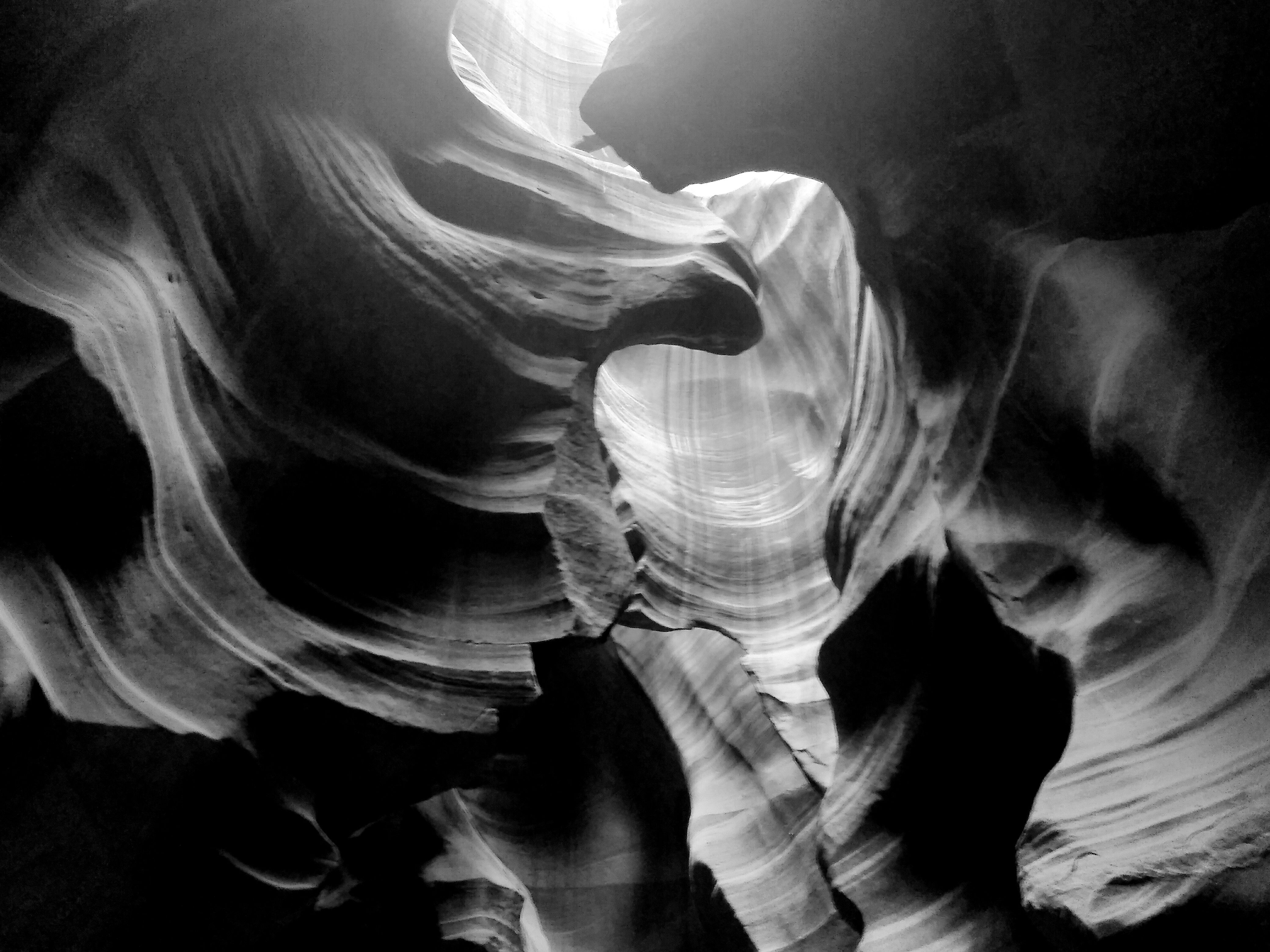 We will go to Kanab the next time and try to win the famous Wave Lottery.
All pictures are mine, except the ones I am visible. Those are someone’s else.

Thank you for reading and upvoting. Let me know if you have questions or comments.
Cheers, Eva (: 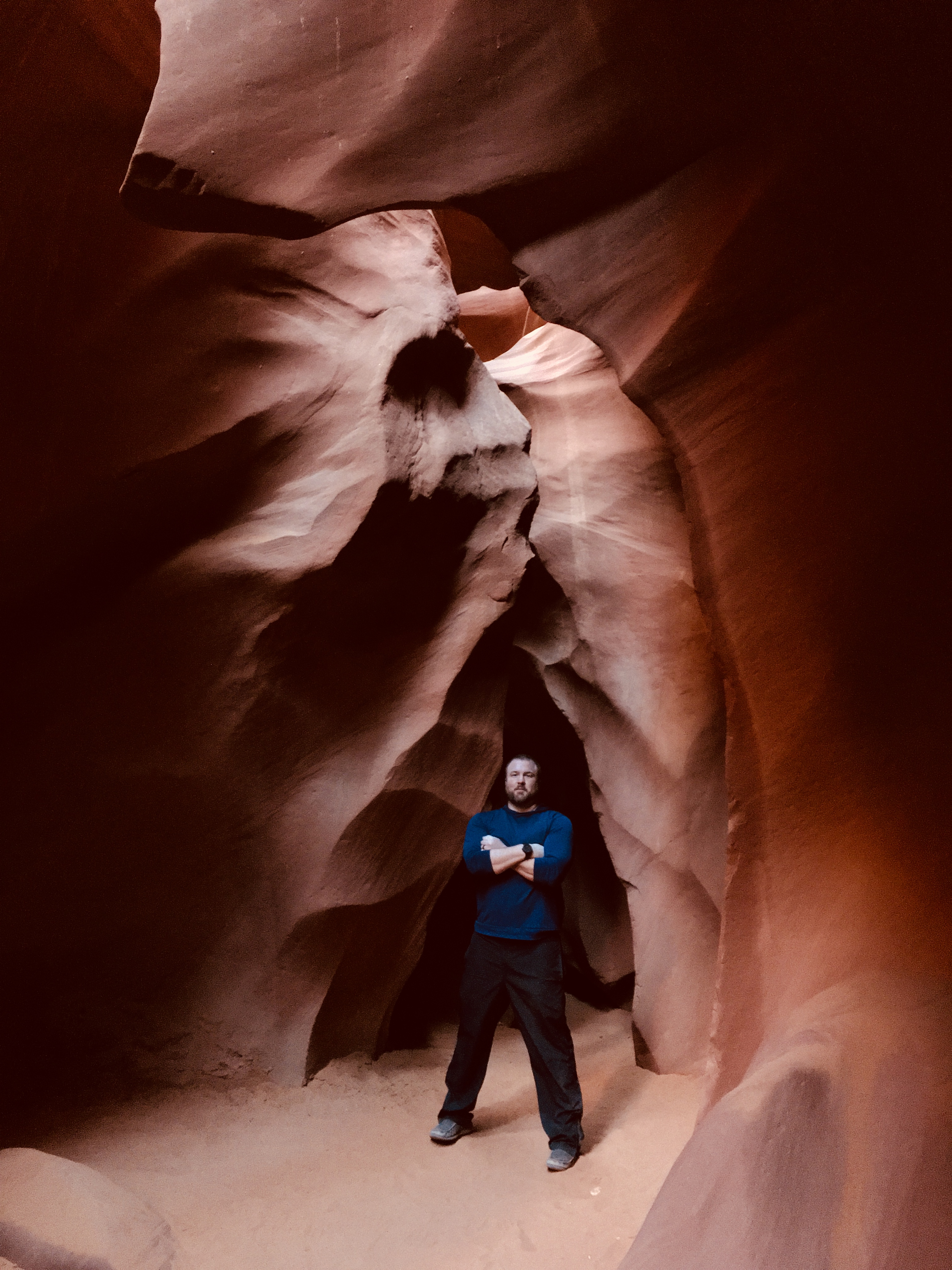 Wow I was just there last week! What an amazing place. That part of the US is one of the most beautiful places on the planet! 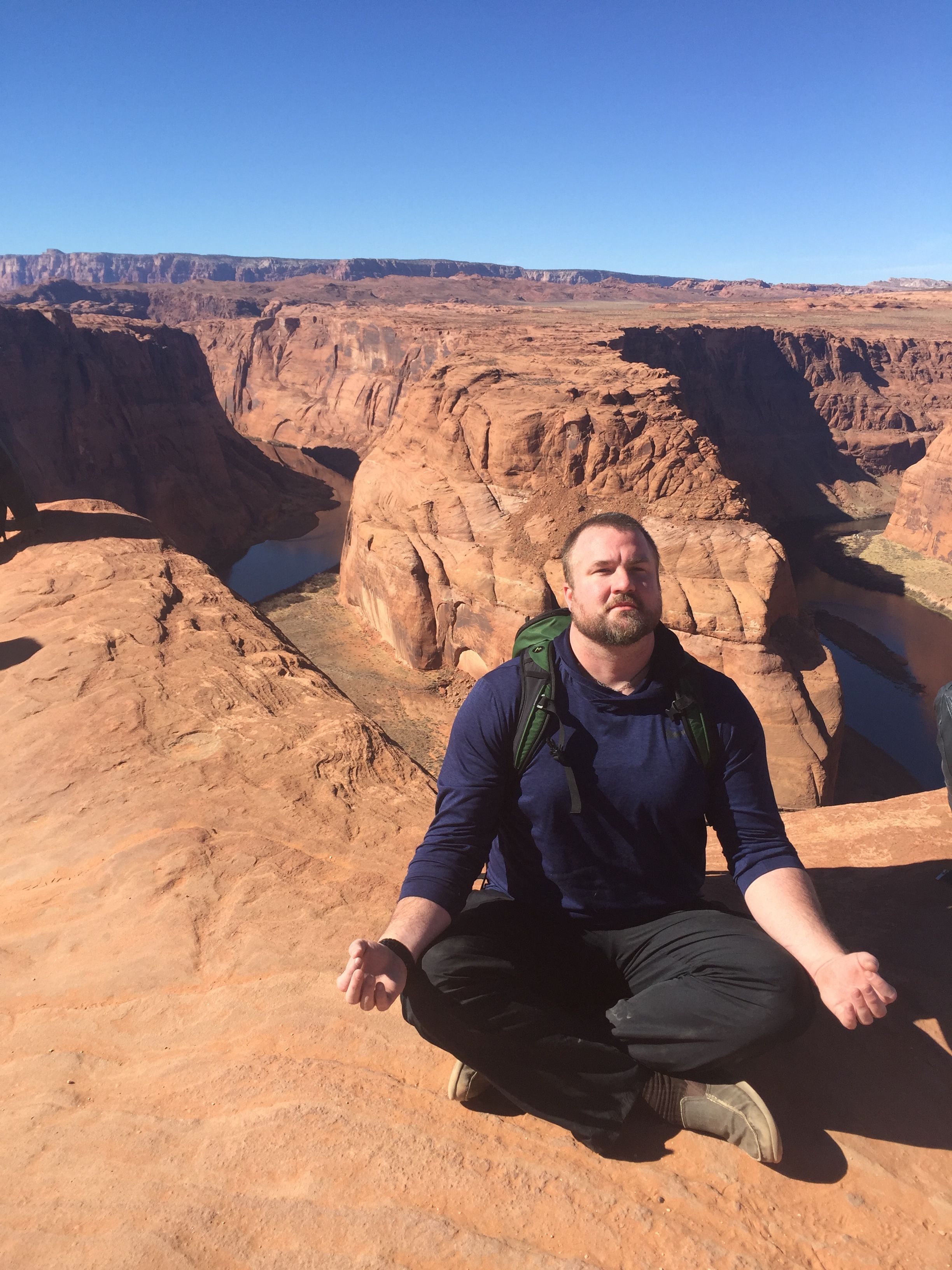 OMG. You just took me back to my own memories. Loved everything about that area and especially the Antelope Canyon. Wonderful pictures!!

Thank you :)) Did you go only to the Upper or also to Lower Antelope?

We only visited the Lower Canyon and I thought it was one of the most amazing things we saw on that trip :-) The walls look like a smooth painting or fabric. I guess you felt the same way! 😃

Same way! :) the lower canyon was closed when I went there, maybe some other time I will get to see it as well :)

What an great trip you had! I would love to visit those places... together with every other national park in the country haha

I'm a bit surprised to read that a few people have fallen from the edge of the cliff at Horseshoe Bend, but then again I'm not; people would do anything for a cool photo to post on their social media channels nowadays! Glad your bear was happy to sacrifice himself for you! ;P

hahah :) it is a brave one :P :) You have amazing parks in US and honestly, I started understanding why many people don't travel outside of the country - you simply have everything inside. Lucky girl :)

The US have sooo much to offer in terms of landscape and adventure. It's a beautiful country! But as always, we always want what we don't have, hence why a lot of Americans would rather go abroad rather than seeing more of their own country. Just like Canadians! Lucky people, hey? :)

Wow! Those area some stunningly beautiful, amazing, and surreal photos. Can you assure us that these were taken on planet EARTH?!?

The one with the teddy bear on vacation is particularly interesting. I had to smile...

Keep up the awesome work, uploading great text with such amazing photos. You will be followed, supported, ... and successful.

I assure you those are on Earth and everyone can go and see it! The bear has so many pictures it can have own travel series :))) thank you for your kind words :) I had to smile reading them as well (:

Beautiful. I heard they are building a platform at horseshoe bend now which is a bit sad.

There was a construction... but I was told it is going to be just kind of a picnic area with a shade. I hope they won't put some stupid glass sky walk on it...

stunning pics and looks like you enjoyed your trip. glad to nominate this for ocd-resteem :)

What a cool place to take photos!

It is beautiful and tricky one :)

Thank you, guys! It is not that claustrophobic once you are inside :)

Gorgeous as usual! Thanks for sharing!

Thank you for stopping by :)

Original idea to take a picture of the bear close to the cliff with that view. I think. I really like those pictures inside the dark caves. It looks you had great time! Enjoy it !!

Hiya, just swinging by to let you know that this post made the Honorable mentions list in today's Travel Digest!

Absolutely stunning pictures, you sure had a wonderful experience visiting the GC. I've never been there, but it is definitely on my bucket list!

it should be on everyone's bucket list in my opinion :)) Thank you for your kind words :)

Great post and beautiful pictures! These places are very high on my bucket list, like all the amazing national parks in that area. Hope I can visit them soon! 🙂

I hope you go and visit them, too :) Looking forward to @travelshots report :))

amazingly beautiful, the pictures are so cool, how to reach such a place?

It is very easy :) You just need to reach Page, from where the agency will take care of you :) You can't go alone to the place, unfortunately :)

it seems so, and also need a lot of money if from where I live, unfortunately T_T I have upvote and resteem

Wow what amazing pictures. As a hobby photographer it is my dream to be there some time, to make beautiful pictures,
I can imagine that you have enjoy your stay there. The light and shadow play in your pictures is fantastic.
Steem on!

Thank you! I hope you get to visit one day (:

Cool shots, Eva, my favorite being the one with your teddy bear :D Is that the canyon where photographers take those famous ghost pictures? :)

By the way, are you in the US at the moment?

Great pictures! Leaving here in Arizona and haven't gotten to Antelope Canyon. I have been to some great slot canyons up in the Grand Staircase Escalante National Monument.

I went to some as well. The whole area is full of amazing places. You can spend years just exploring Arizona :)

You got that right

wow amazing shots. grand canyon actually is on the very top of the bucket list. hope to visit it the next years.

Wow, amazing place! And that bear is one brave little fella :)

Agree that this trip is one of the best!

Really amazing with the lines in the rocks. Must have been really nice to walk there.